This is part four of our hike around Anglesey. Here are parts one, two, and three.

We woke up to a rainy day in Bangor.  I guess we took our time at breakfast because before we knew it Eurwyn from Anglesey Walking Holidays showed up for our luggage transfer.  We chatted for a bit, and Eurwyn offered us a ride.  We had already walked from Menai Bridge to Bangor, and to repeat this roadbash beside the busy A5 highway seemed pointless, so we readily accepted the offer.  Eurwyn dropped us off at the Llanfair PG train station, where we continued our hike around Anglesey.

Llanfair PG’s full name is Llanfairpwllgwyngyllgogerychwyrndrobwllllantysiliogogogoch.  No I did not fall asleep on my keyboard, that’s the actual name of the town.  It’s the longest place-name in Europe.  Several locals on Anglesey pronounced it for us, and they are very proud that they can do so and love the reaction they get (say what!?)  Supposedly the town got its name in the 1860s as a publicity stunt.  We took a few pictures, crossed the railway tracks, and located the coastal path along the main road.

After a while the trail cut inland, heading for an ancient burial mound called Bryn Celli Dhu.  The trail led across some mucky paddocks and at one gate there was a large herd of dairy cows on the other side of the gate.  We did not feel like spooking fifty or more cows so we found a detour by scrambling through some stone and wire fences.  At the bottom of this field was a handmade sign saying “monument” pointing to the left.  We should have gone straight, across the creek.  So we missed Bryn Celli Dhu.  The trail now followed a country road to the south, back to the coast.  Note that if you intend to visit Plas Newydd (mansion and gardens) you need to hike back about half a mile back towards Llanfair PG.  Or, where the trail turns off of the highway towards Bryn Celli Dhu you could simply continue along the highway for a quarter mile.  In short, by following the coastal path signs we managed to dodge both of these attractions.

Ahead, my map indicated two tearooms but they ended up being a petting zoo and aquarium packed with bank-holiday day-tripping families.  We continued on.

There were some nice views across Menai Strait

The trail then turned inland, leading to Dwyran.  We stayed there for the night.

At our B&B, some other long-distance hikers were staying for the night.  At dinner and breakfast we chatted.  We found out that the “Stepping Stones” just west of Dwyran were impassable.  The Stepping Stones are giant stones, laid across the estuary by druids some 2000 years ago, allowing hikers to jump from one stone to the other so as to cross without getting the feet wet.  However last winter’s “Beast from the East” storm had tilted several of these stones.  Wading the estuary did nor seem like much of an option because the water would have been waist-deep, and the highway detour around it did not have a shoulder.  So we took up B&B owner Mike’s offer of a car ride around the estuary to the trailhead at Llyn Rhos Ddu.

We started out by hiking along a forestry road.  On our right was forest, and on our left were sandy dunes.  It was a clear and sunny day.

The road led to Traeth Llanddwyn, a very pretty sandy beach.  We enjoyed the great weather and beautiful surroundings.  In the distance we could see Llanddwyn Island.

We hiked down the beach to a tombola that connects Llanddwyn Island with Anglesey.  The tide was still going out, and we took off our boots to ford the water.

Llanddwyn Island is very pretty.  It’s about 3/4 miles long, covered with grass, and has a number of cove beaches around its perimeter.

A skilled carpenter made some really pretty gates. 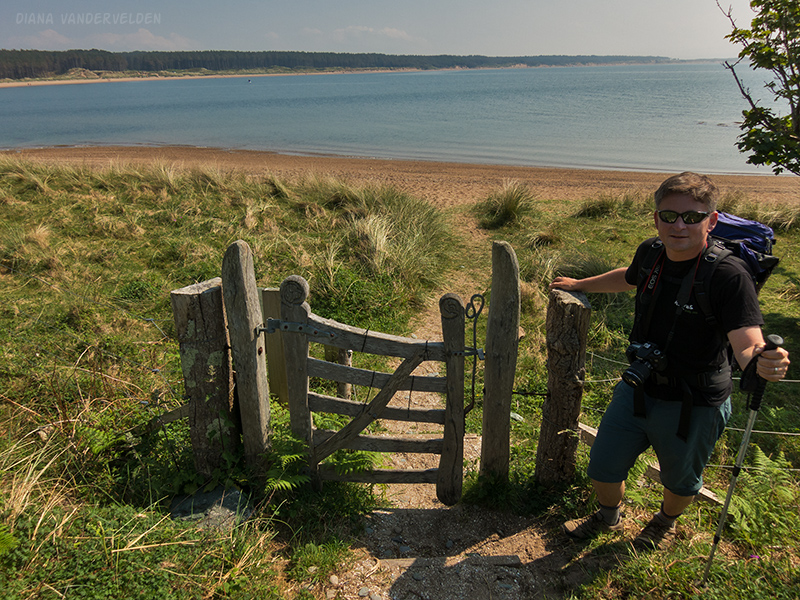 We hiked to a hilltop which offered great views back to Llanddwyn Beach, which we had hiked earlier in the day.

Time for a selfie in this spectacular place. 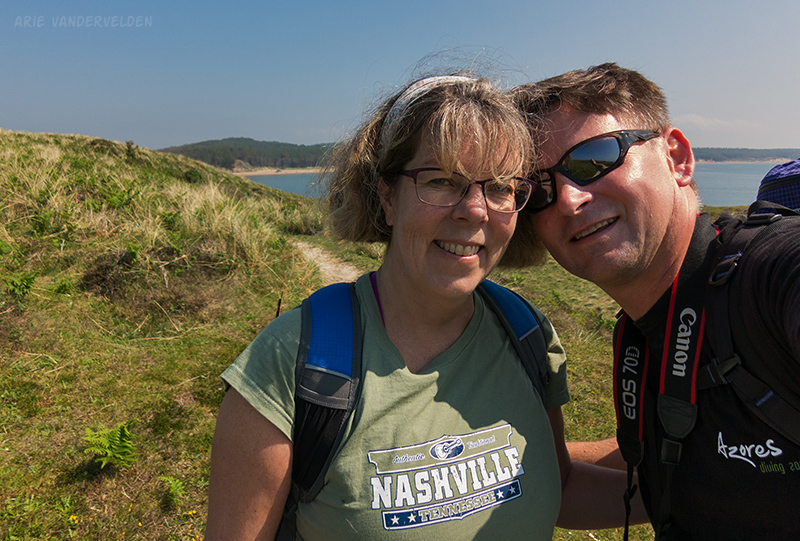 It also offered views of the attractions at the tip of the island: a lighthouse (or rather the base of one), a cross, a Celtic cross; some cottages, and St. Dwynwen’s church.

The story of St. Dwynwen, Welsh patron saint of lovers, is an interesting one.  Dwynwen was the daughter of King Brychan Brycheiniog.  She fell in love with prince Maelon Dafodrill even though she was betrothed to someone else.  When Maelon found out she was to be married he attacked her.  For this sin he was frozen into a block of ice.

Dwynwen ran away into the forest.  She prayed and made three wishes: she wished Maelon to be unfrozen, she wished never to be married, and she wished to be able to help people unhappy in love.  Those wishes were granted.

Dwynwen then went to Ynys Llanddwyn (Llanddwyn Island) to live as a nun.  It is said she had a magical well full of enchanted eels that could tell the fortunes of lovesick pilgrims.  Dwynwen died around 460 AD.

As we were pondering St. Dwynwen’s story a fogbank suddenly came rolling in.  Gone was our warm sunny weather.

Even though the long-distance views were gone, we still enjoyed our surroundings.

The fog added an element of mystery and magic, to go with St. Dwynwen’s story.

We hiked back to Anglesey, where I spotted some well-preserved pillow basalts.

We continued to the west, on Penrhos Beach.  The tide was now all the way out, and the beach was huge.

We climbed a dune and stopped for a snack.

We hiked to the end of the beach and turned up the estuary.  Here we found a path that led through some salt marshes back to the forest.

We met up with a forest road and slogged mile after mile.  It was quite hot.  At the main road the trail followed a dike across the estuary to Malltraeth.  Here we stopped at a tearoom for some cakes.  After Malltraeth the trail looped for several miles across a headland that was all part of one estate.  The trail followed mostly country roads, but some sections were through fields and bushy areas.

Our feet were pretty sore on the last mile into Aberffraw, where we stayed for the night.  We were concerned about dinner because we were told the local pub was fully booked for the evening.  However we found a spot in their garden and we had a nice pub meal there.  While enjoying the nice surroundings in the pub garden we reflected on the past few days.  It turned out we had our poorer weather on the stretch that was less scenic (Beaumaris to Bangor, Llanfair PG to Dwyran) and we had great weather on the most scenic stretches (Benllech to Penmon, Dwyran to Aberffraw).  Lucky.  We’ll take it!

In part one of our hike I describe how to organize a hike on Anglesey.

Llyn Rhos Ddu (west of the Stepping Stones where we stated our hike) to Aberffraw is about 13 miles (21 km).  The detour to Llanddwyn Island adds about 1.5 miles (2.5 km).  We also detoured into the Malltraeth Estuary, rather than hiking the more direct forestry roads.

Continue to part five of the hike.