In the evening at West Bay there was a dense fog, and we woke up to pouring rain.  This was unfortunate because the trail led past some sandstone cliffs that I was particularly keen on photographing. 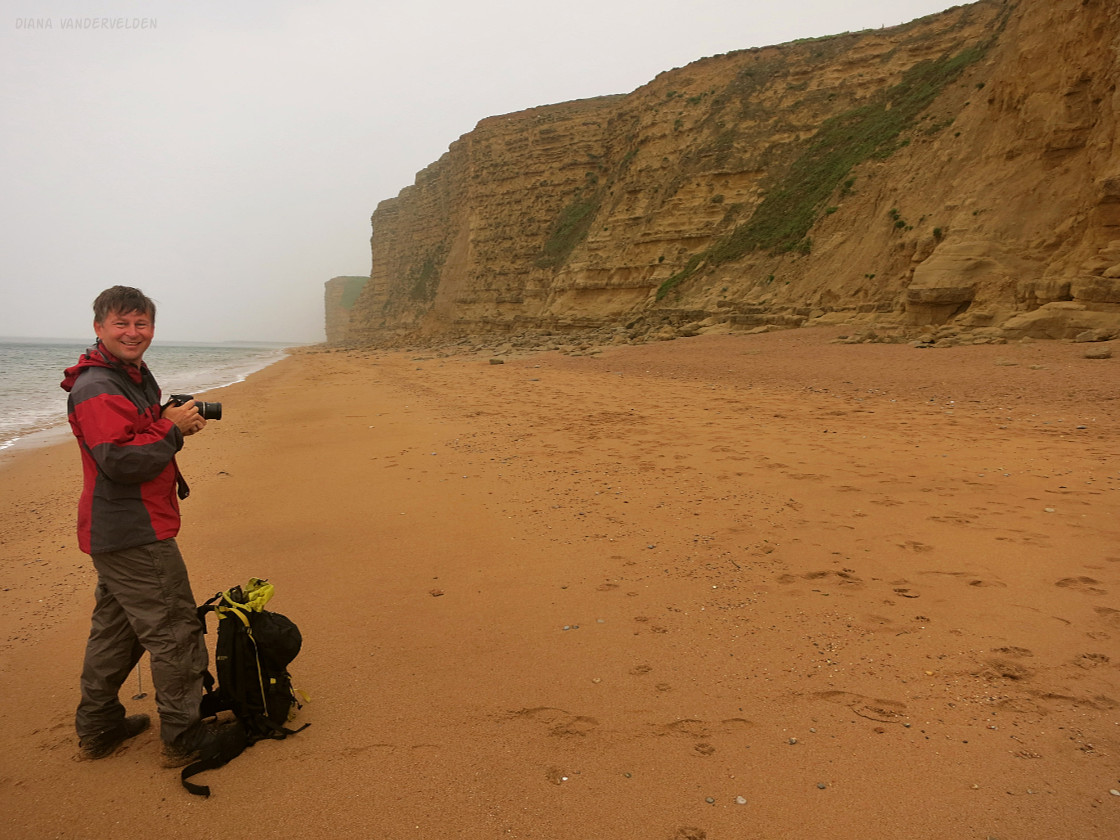 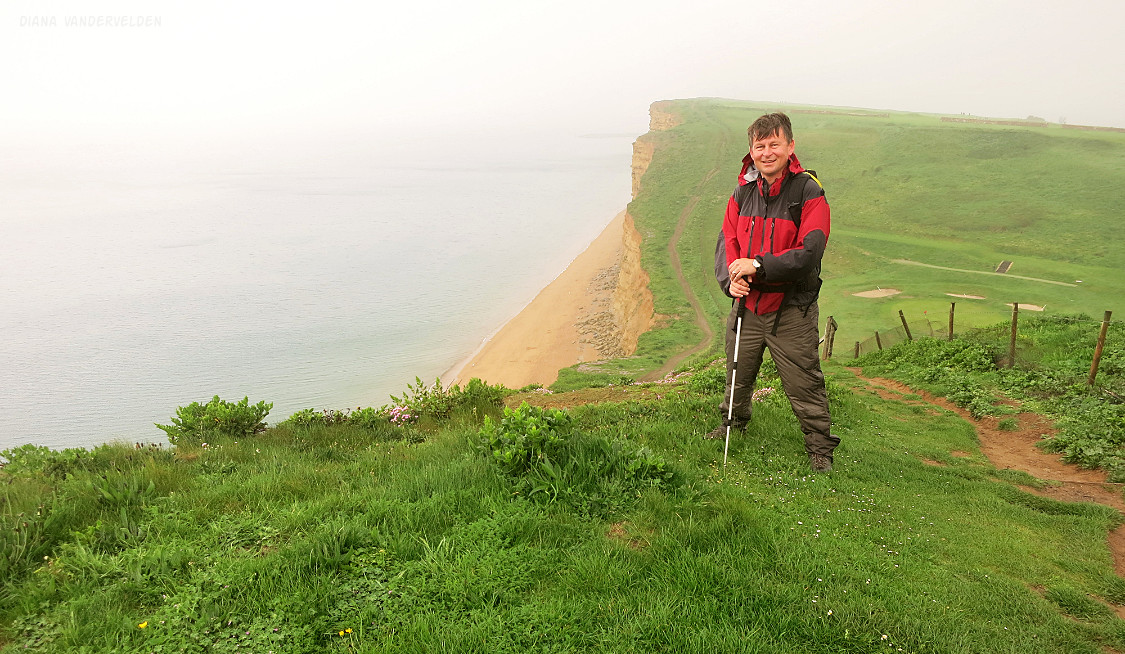 Near the next rivermouth we detoured inland a bit to have a look around the village of Burton Bradstock. 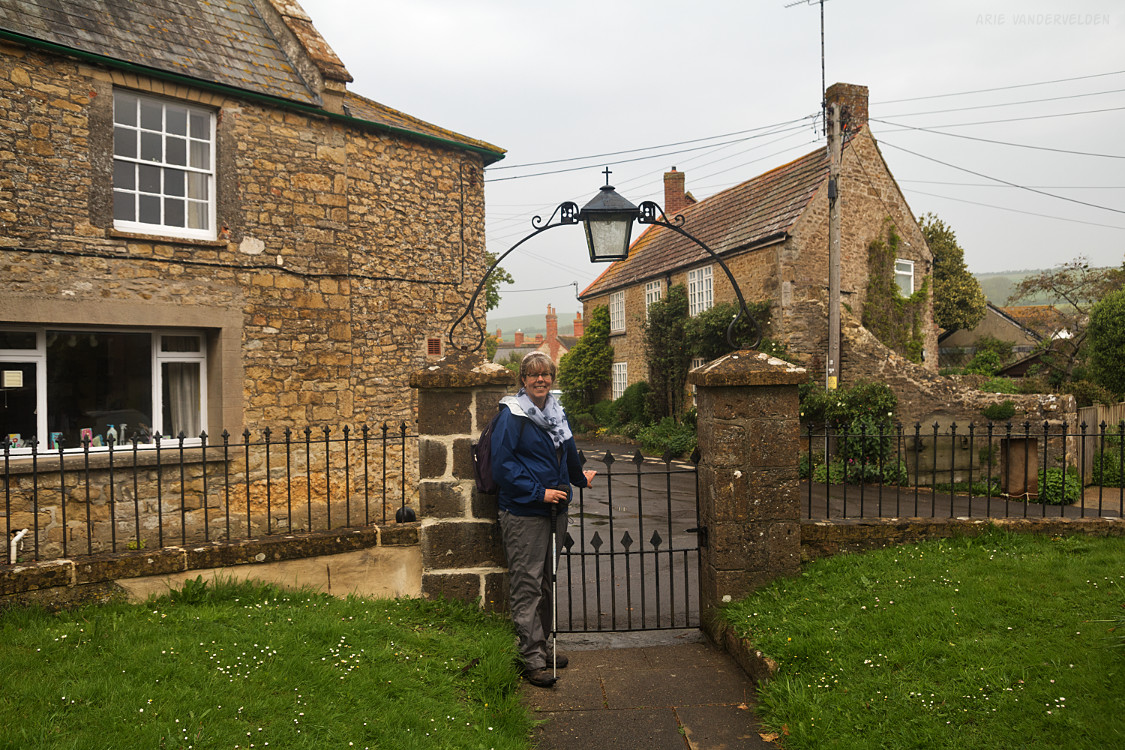 It’s a really pretty village, with houses made out of honey-colored stone, and cottages with thatched roofs. 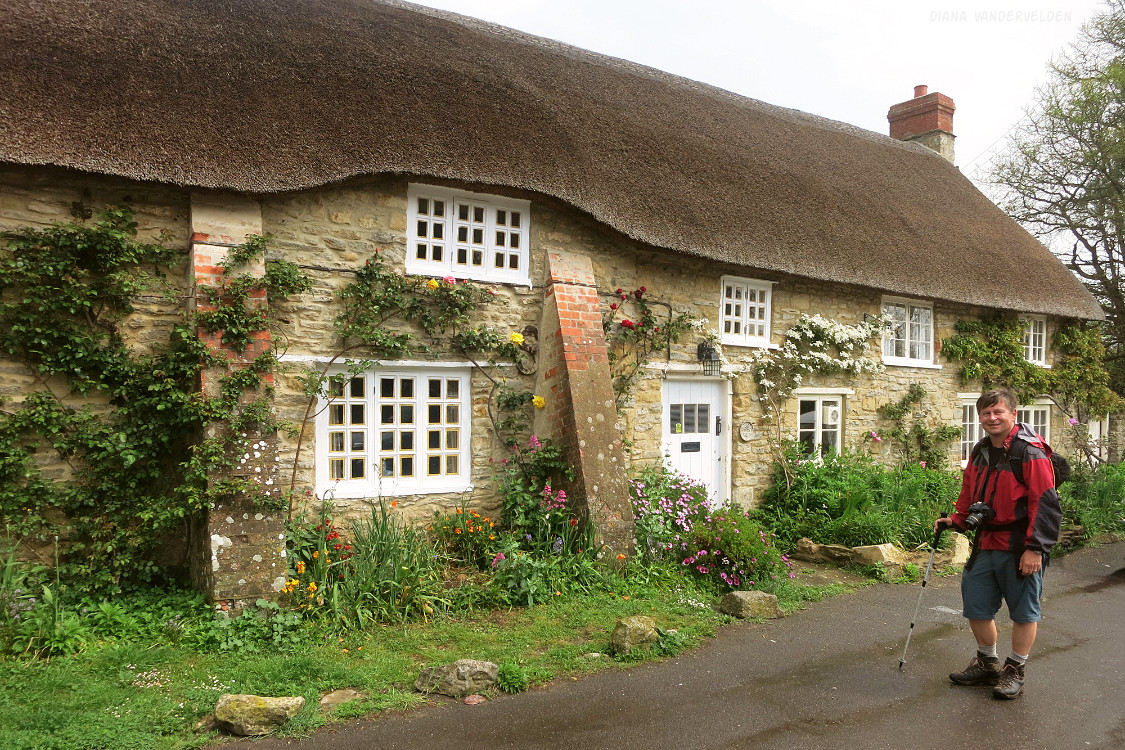 Burton Bradstock marks the start of Chesil Beach, a 20 mile long beach that is straight as an arrow and goes all the way to the Portland Peninsula near Weymouth.  Ian McEwan set his book “On Chesil Beach” in this area.  The the book was also made into a film. 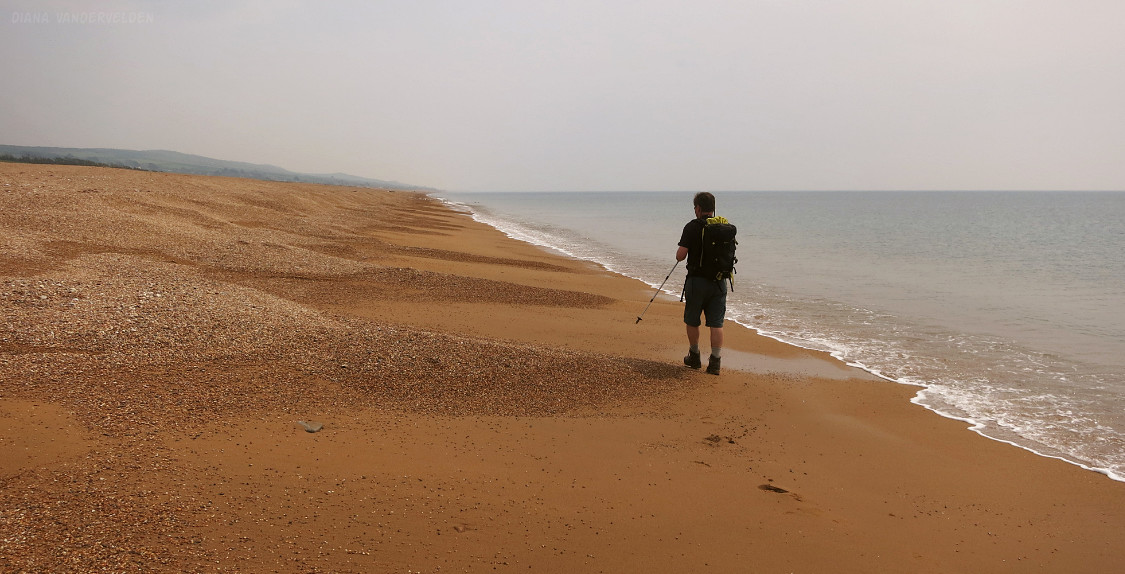 Initially the beach was sandy, but after a few miles it turned to marble-sized gravel which was very tiring to walk through. We picked up the trail behind the beach, which was grassy initially, but led back onto the beach, so more trudging through gravel.  Scattered along the beach were remnants of WW2 pillboxes, and we could spot more of them on the hillside behind the beach.  I suppose if the Germans had invaded, then this large beach would have been a good spot. 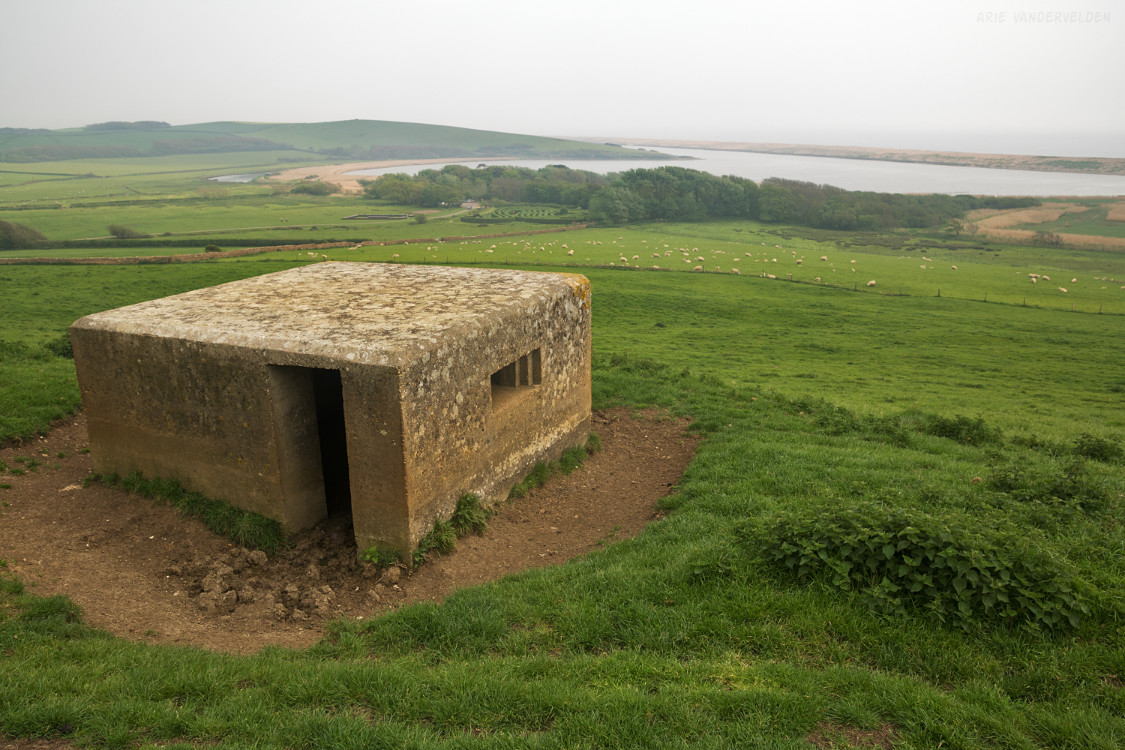 Ahead was a chapel on a hilltop. 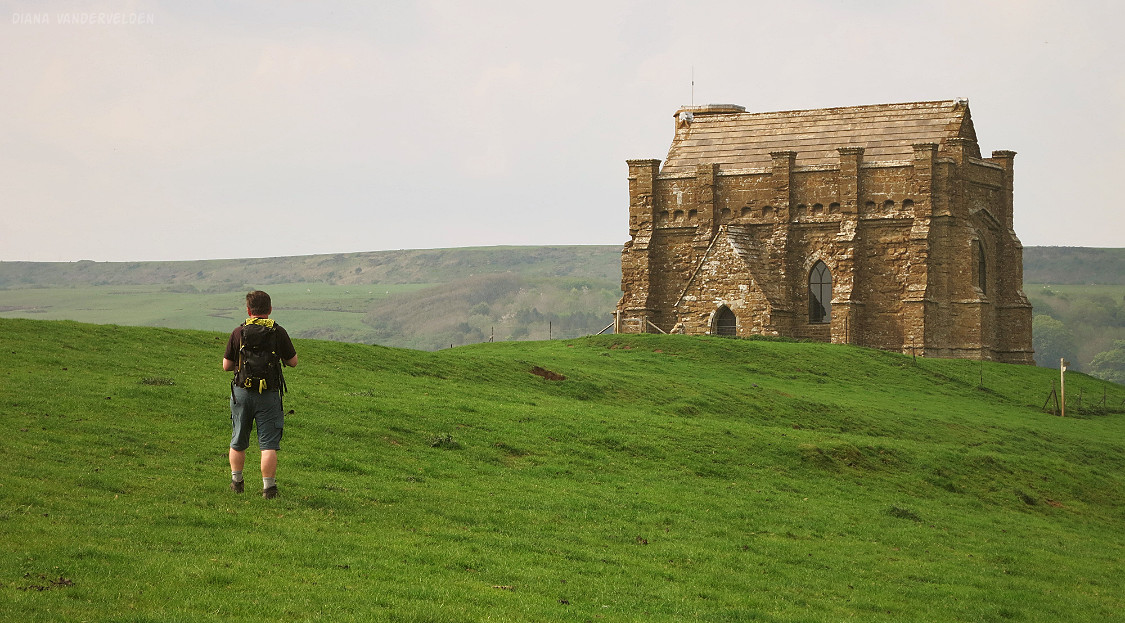 From the chapel it was a short walk to Abbotsbury, our destination for the night. 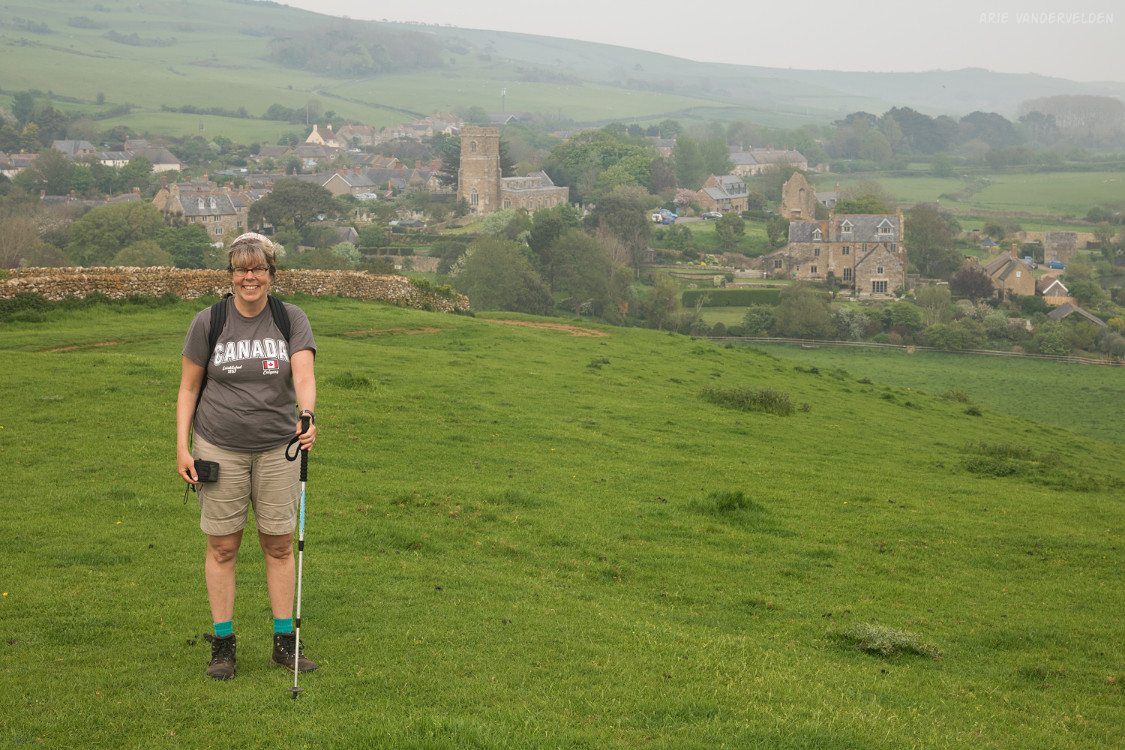 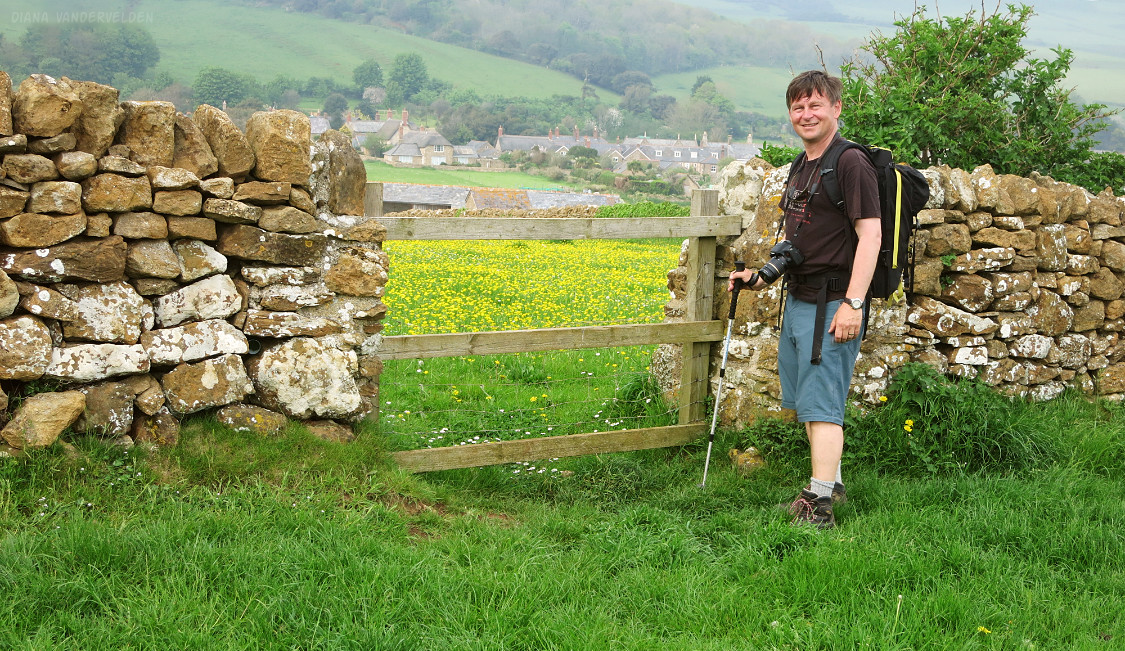 Abbotsbury has a big old church surrounded by teetering headstones, weathered and covered by lichen, the writing mostly illegible now.  As were were exploring the church grounds a thunderstorm rolled in.  Lightning filled the sky, and it started pouring.  It was quite dramatic. 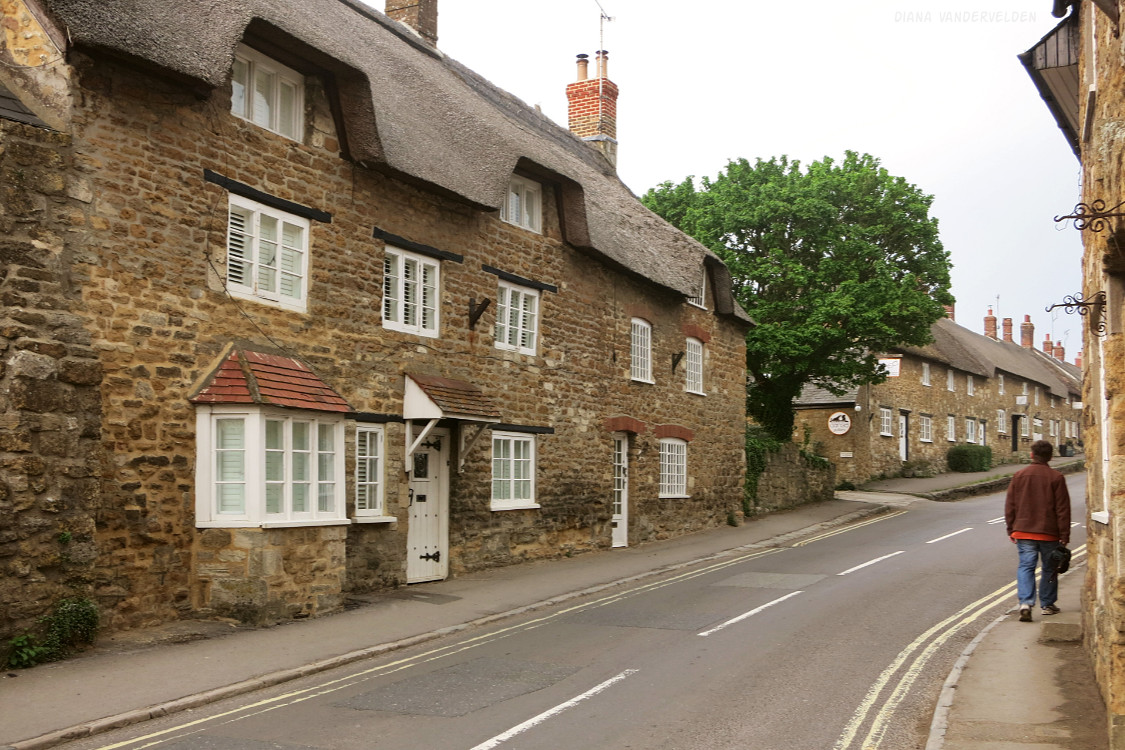 We stayed in a little B&B, run by an elderly lady. It’s an old farmhouse that is as chocolate-boxey-cute as you can imagine. The stairs are crooked, you had to duck your head in doorways, there are antique knick-knacks everywhere, and there are more doilies than I’ve seen anywhere else in my life. 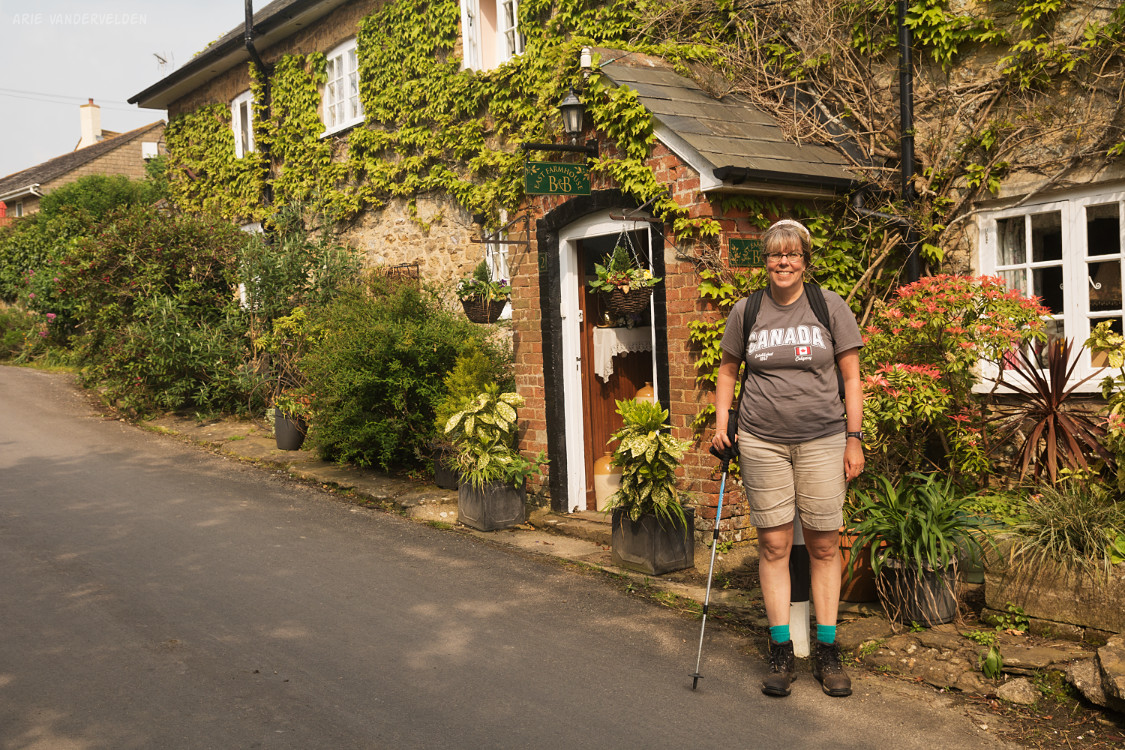 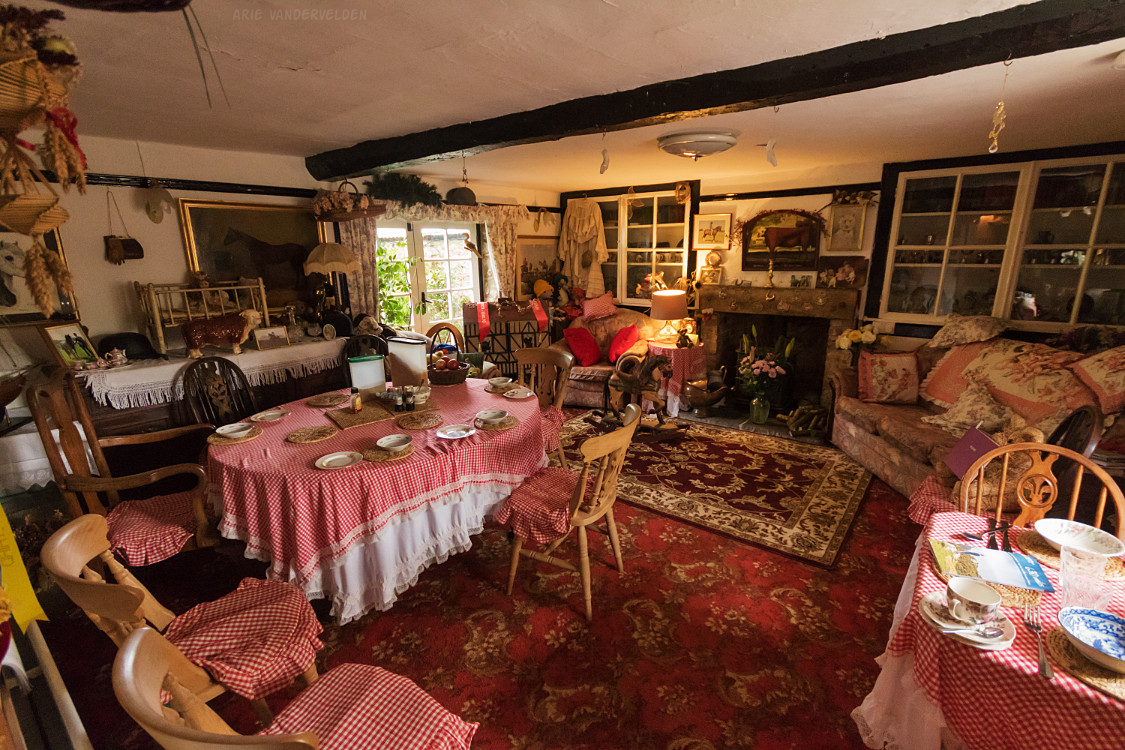 After dinner we found out that our B&B host only takes cash.  I just happened to be running short on cash, and the village of Abbotsbury did not have a cash machine.  We asked the bartender at one of the pubs, and he shhugged.  But the local drunk at the pub overheard us.  “Ah yes,” he said, ” you must be staying at Wendy’s.  Yes, she’s lambing her ewes right now.  Yes, she does like cash.  Well, you just go down to the Swan Inn (the other pub down the road where we had dinner) and ask for cash back on your credit card.”  So off we went, with the village drunk in tow.  He was a very friendly fellow, and he kept asking us the same questions again and again.  The bartender at the Swan was very friendly and helped us out.  So. disaster (or at least embarrassment) avoided. 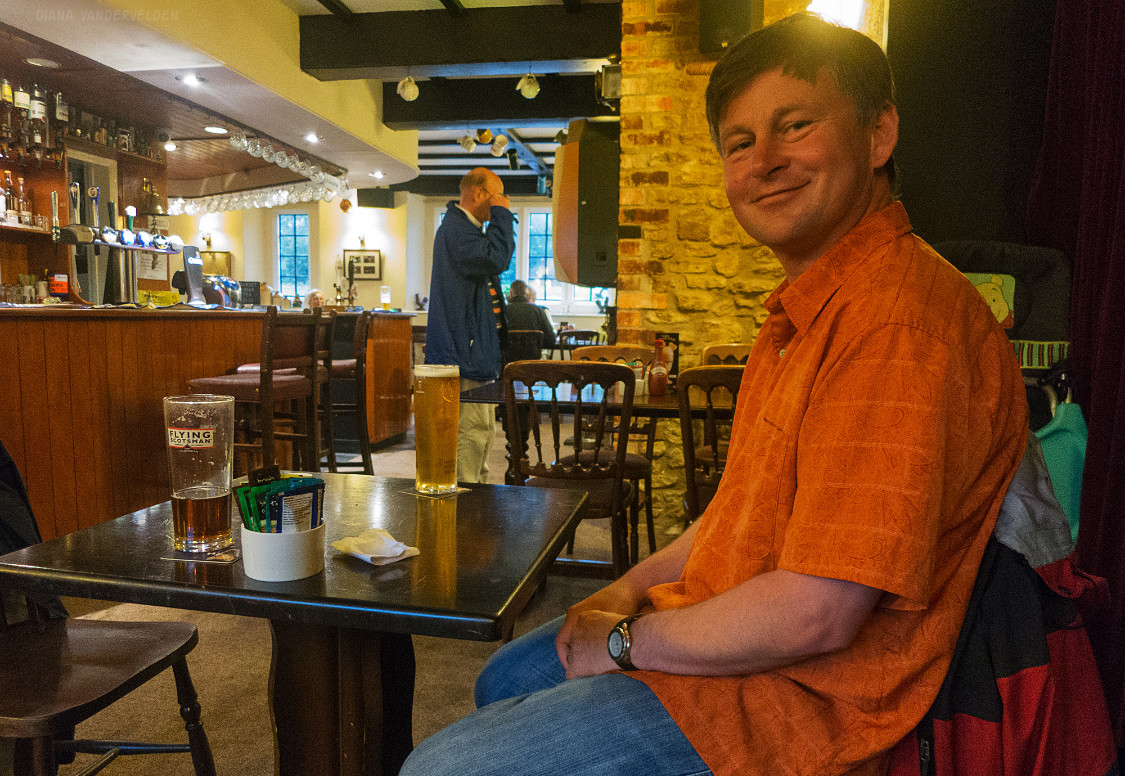 This hike began by crossing a number of paddocks.  The paddocks were separated by stone walls and gates, and we had to climb across a variety of livestock-impeding contraptions to get from one field to the next. 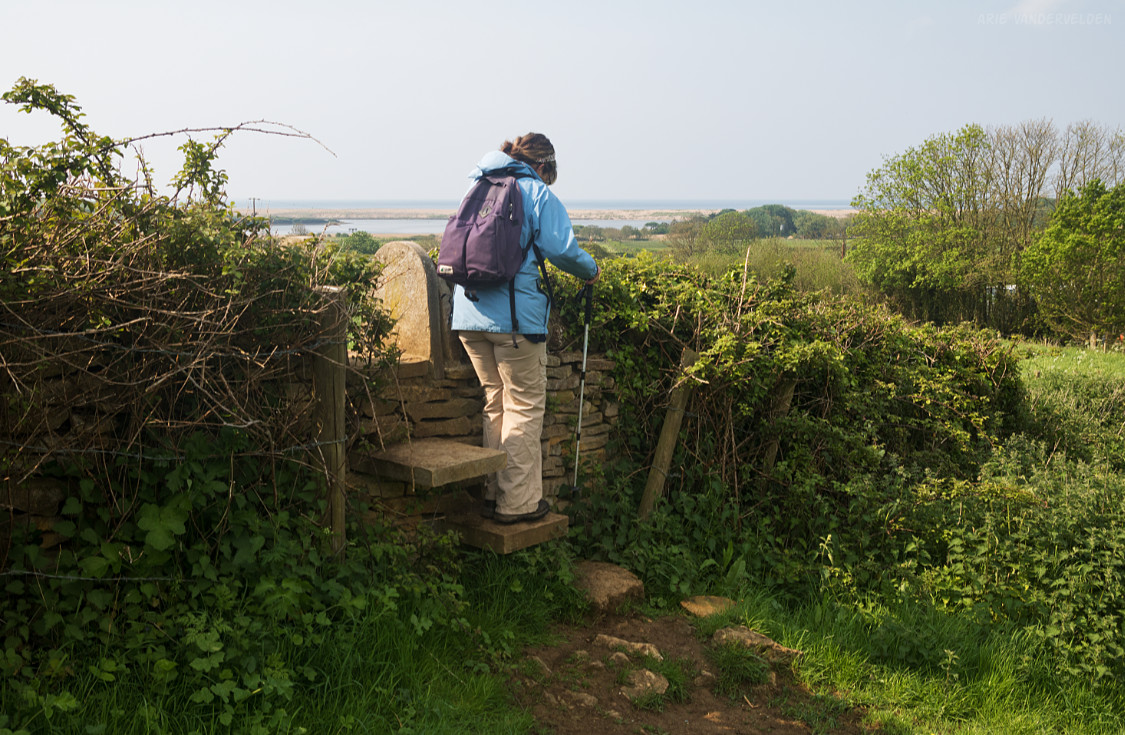 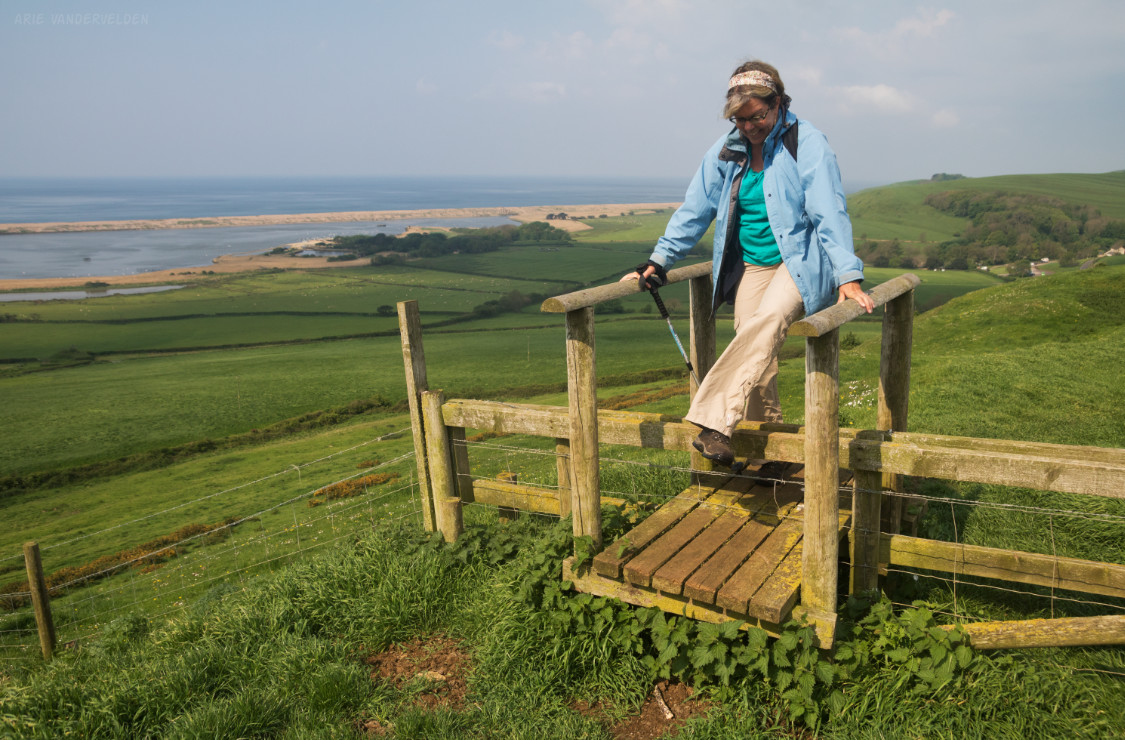 The fields were open, and we had good views towards the coast. 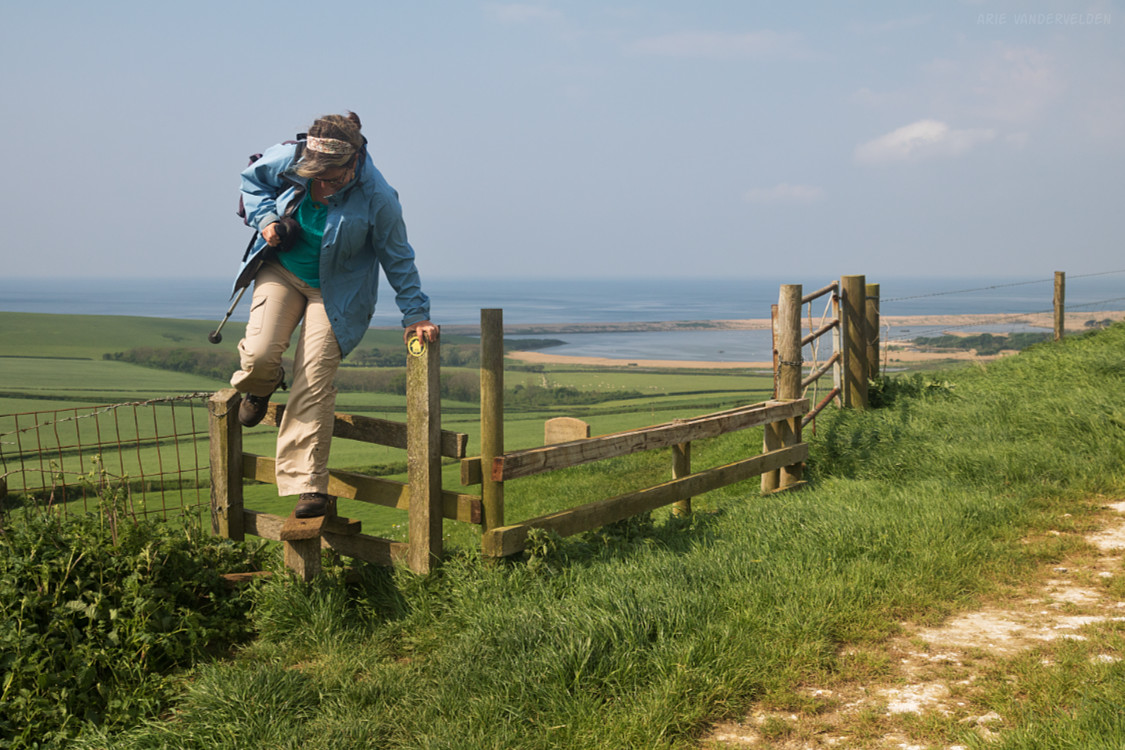 Beyond Abbotsbury, Chesil Beach has a lagoon behind it and there is no more beach access.  The hiking trail followed the shoreline of the lagoon. 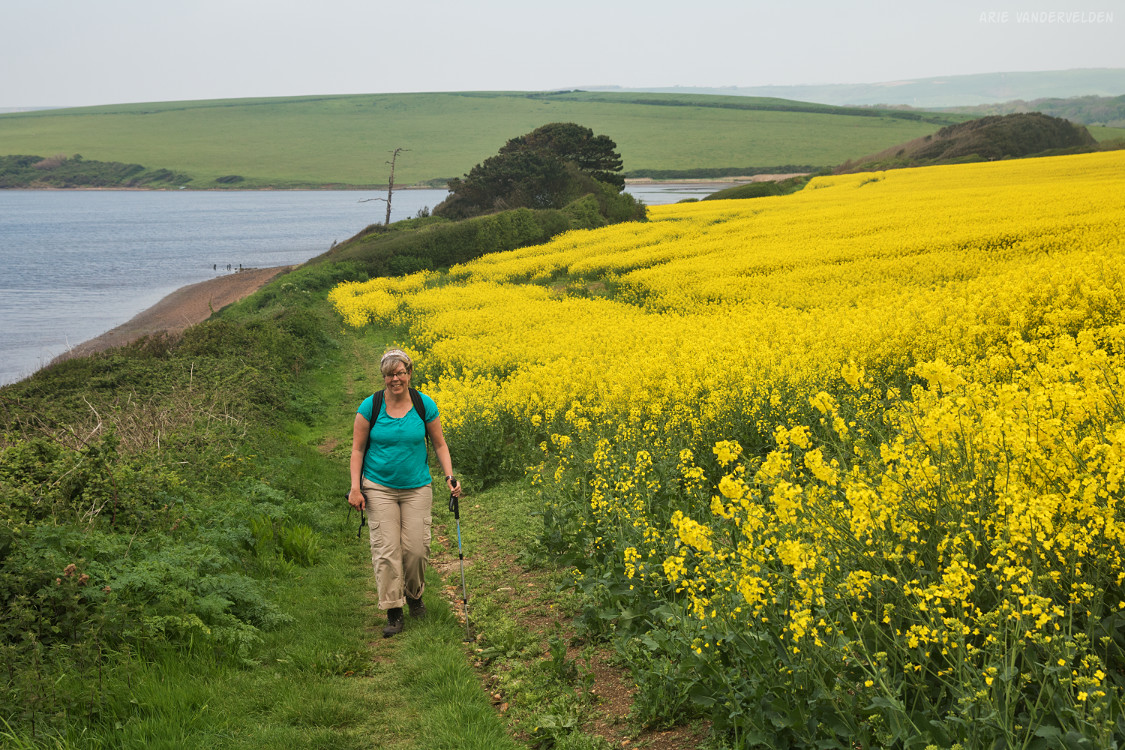 This day I wore shorts, and I had neglected to pack any type of long pants.  This turned out to be a mistake because the trail was quite overgrown with stinging nettles in places.  I shimmied through parts where there was a narrow passage, and in more overgrown sections I used my hiking pole as a weed-whacker.  Even so, my calves were red and sore when I got to Weymouth.  So, lesson learned: always bring long pants.  The last bit into Weymouth was quite muddy, thanks to the thunderstorm of the night before. 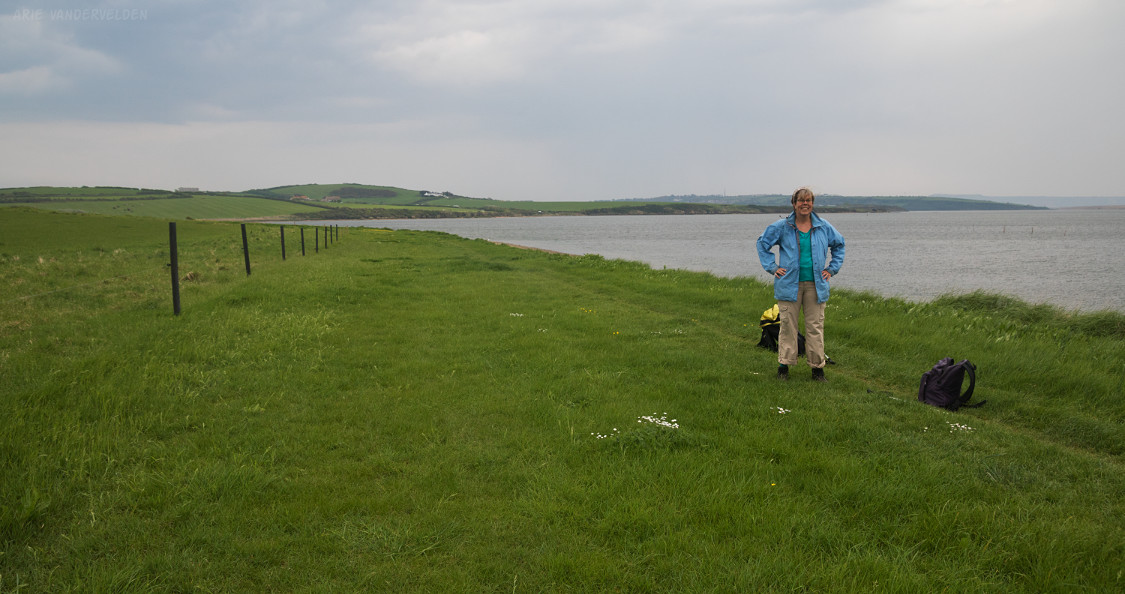 Weymouth is a pleasant, family-oriented coastal town with a huge sandy beach.  It’s the kind of place where people come to eat fish-and-chips on a bench facing the sea, being eyed carefully by hungry seagulls.  Kids eat salt taffy and watch the local Punch-and-Judy show.  It’s all in good fun. 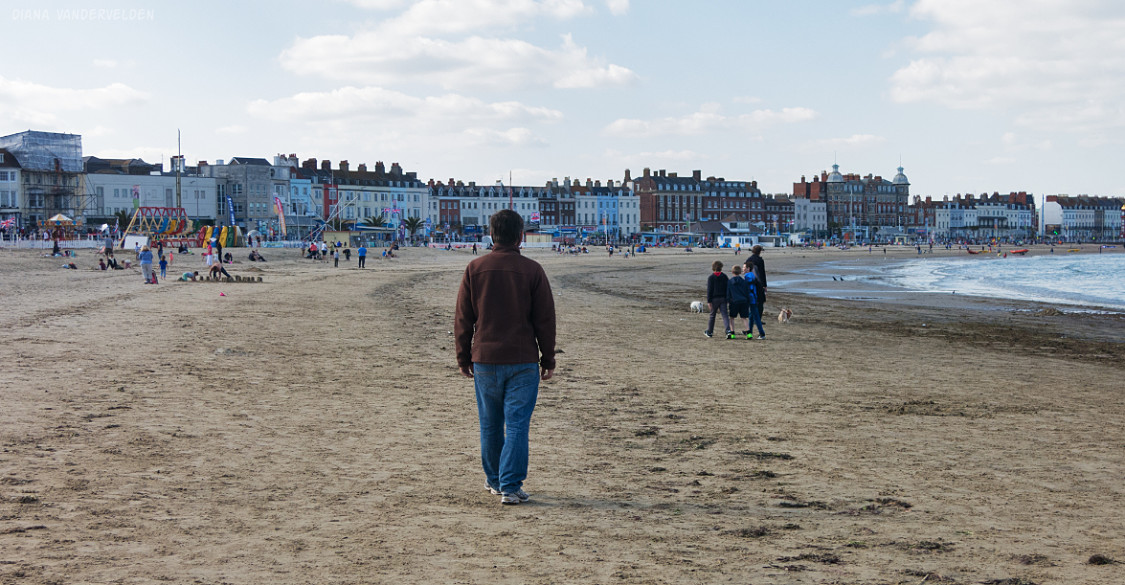 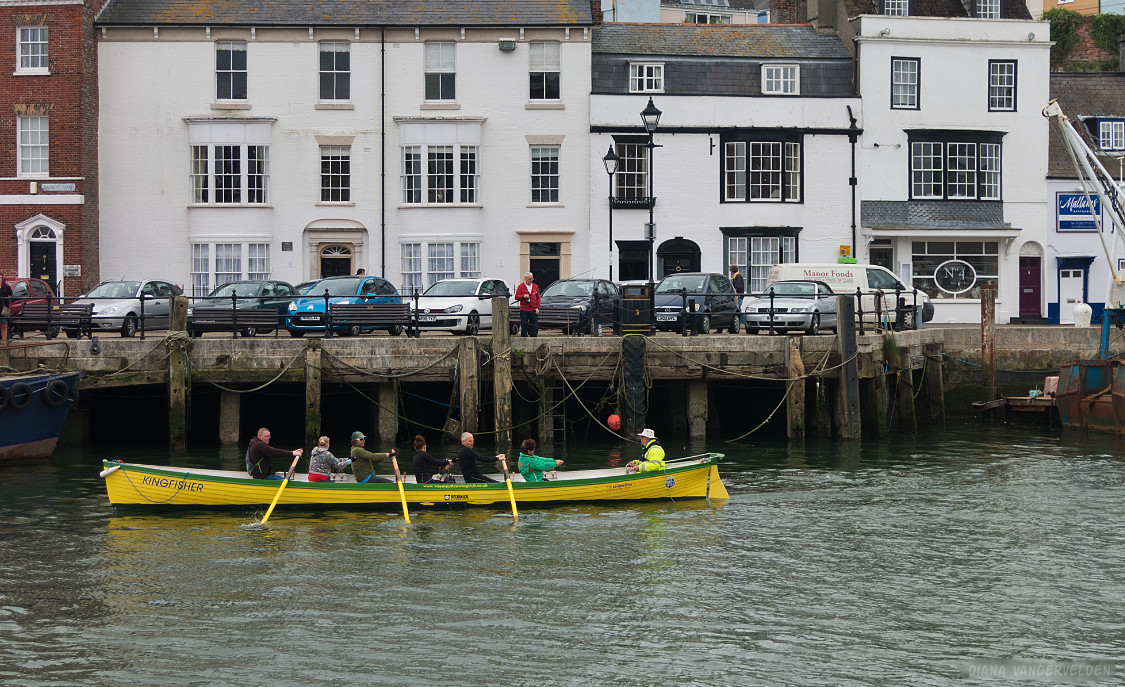 Our B&B room was tiny, but it had a wonderful view of the sea.  When we opened the window we could hear the waves lapping the shore. 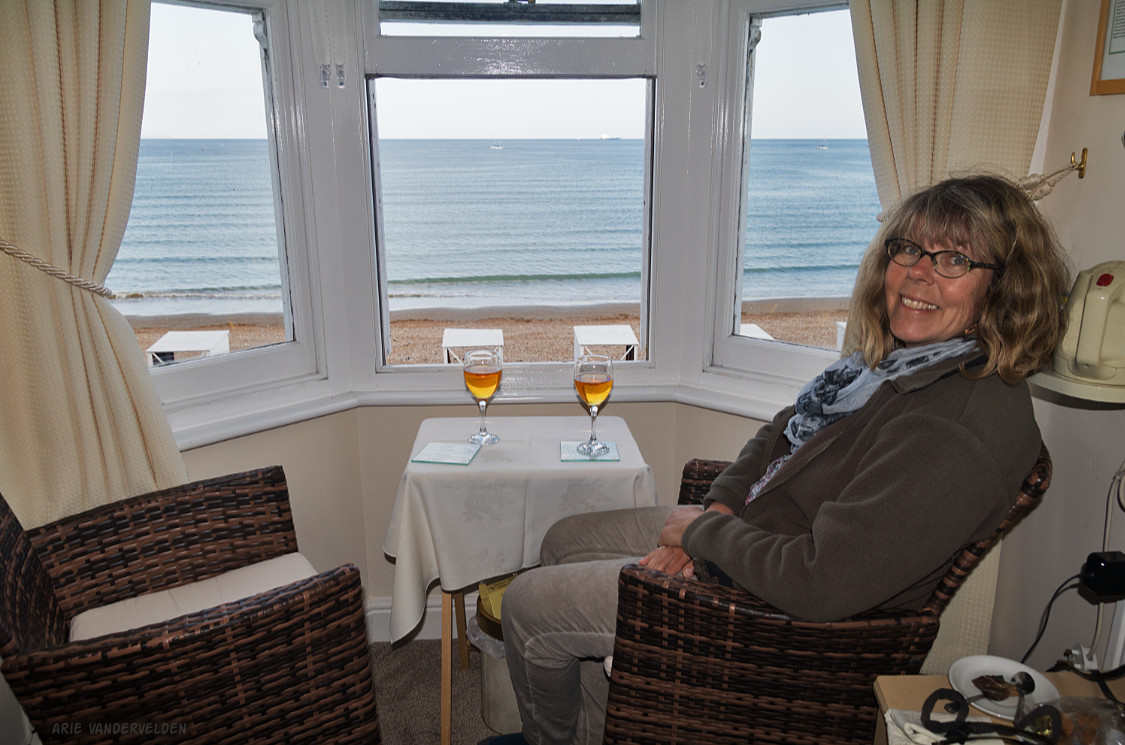 This leg of our journey began along the esplanade, and then crossed some easy rolling terrain.  It was a beautiful sunny day and we made quick progress. 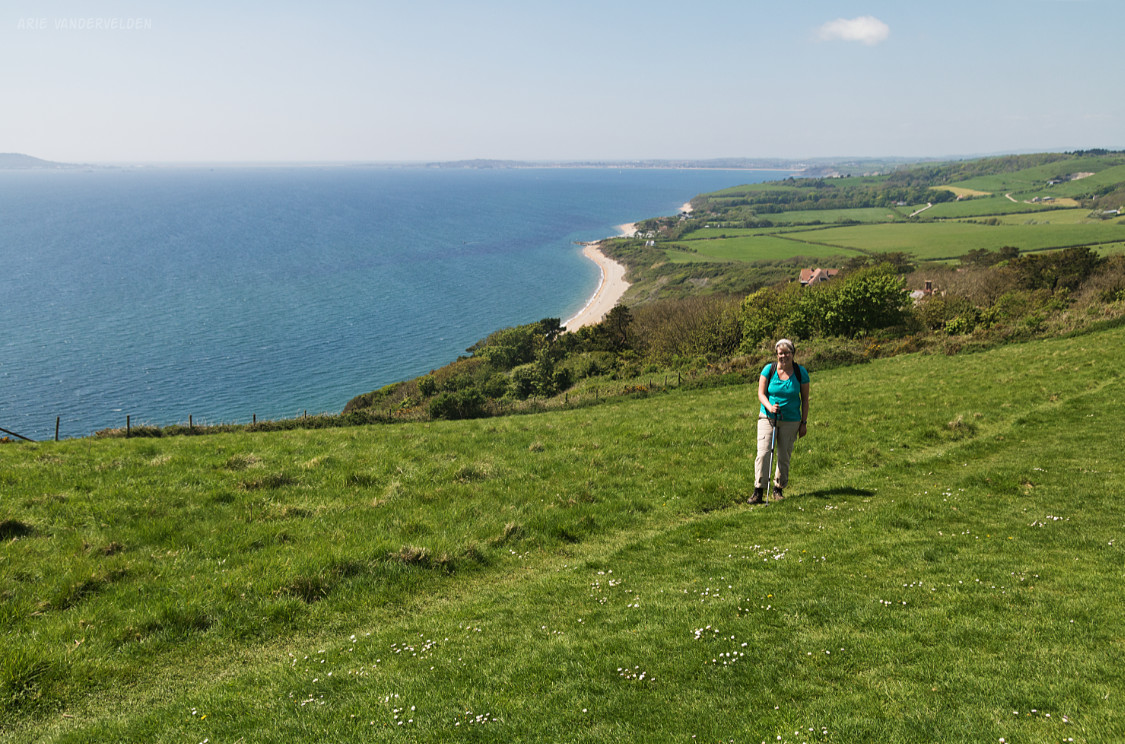 Here, as in other places in Britain, coastal erosion eats away at seafront real estate.  This slump block looked very fresh. 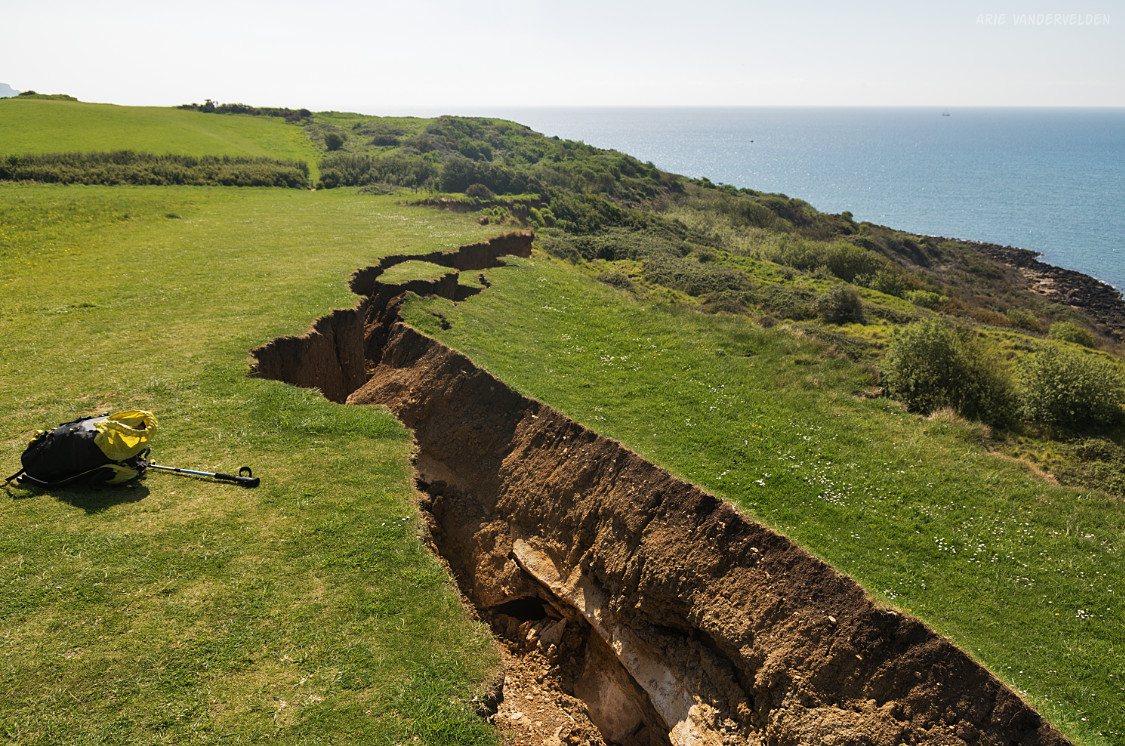 The hiking was very enjoyable. 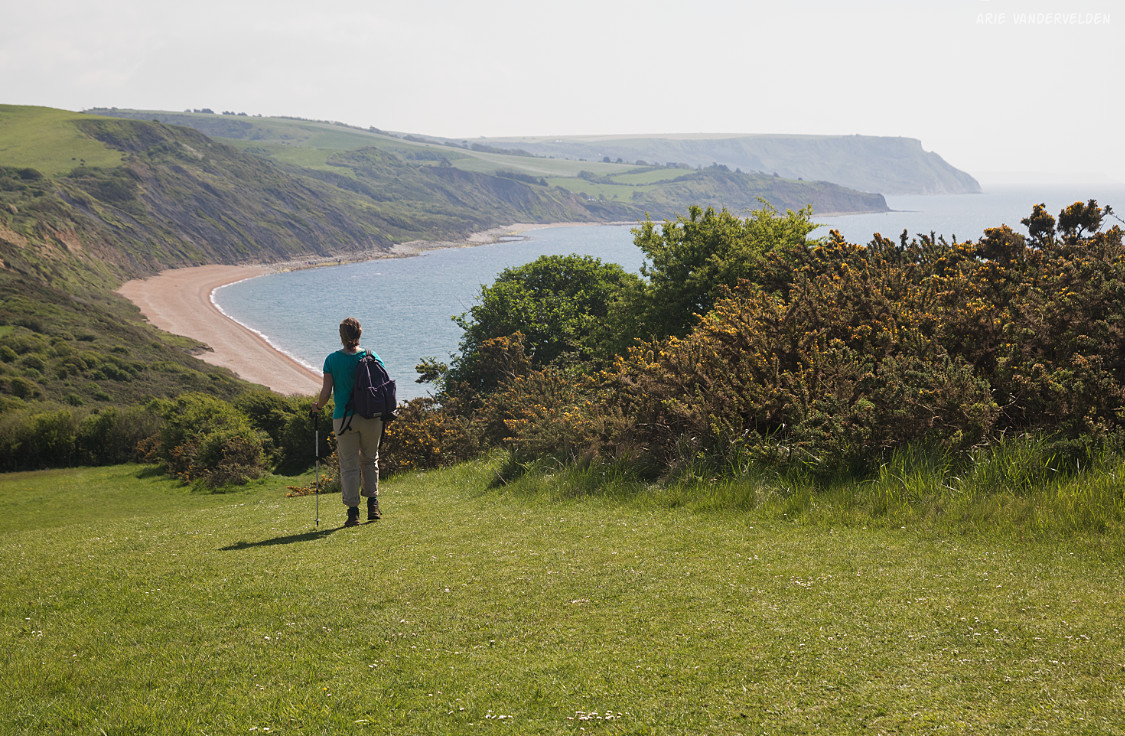 Only a few more miles to go! 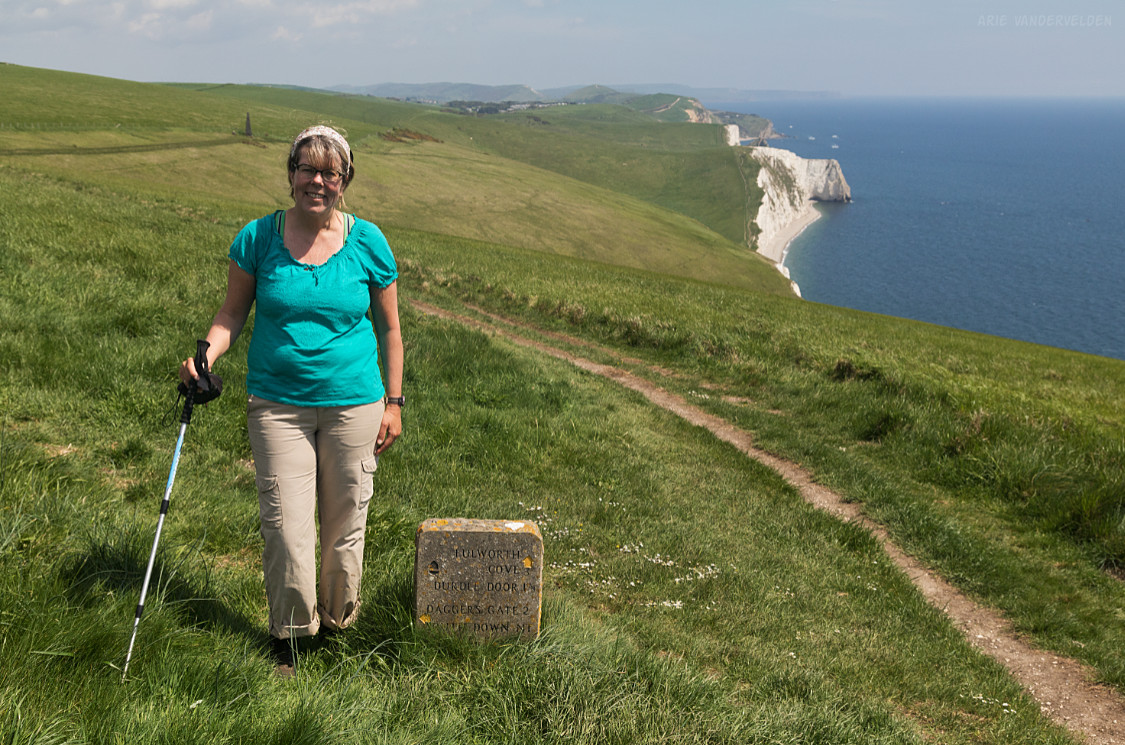 Ahead were bright-white chalk cliffs. 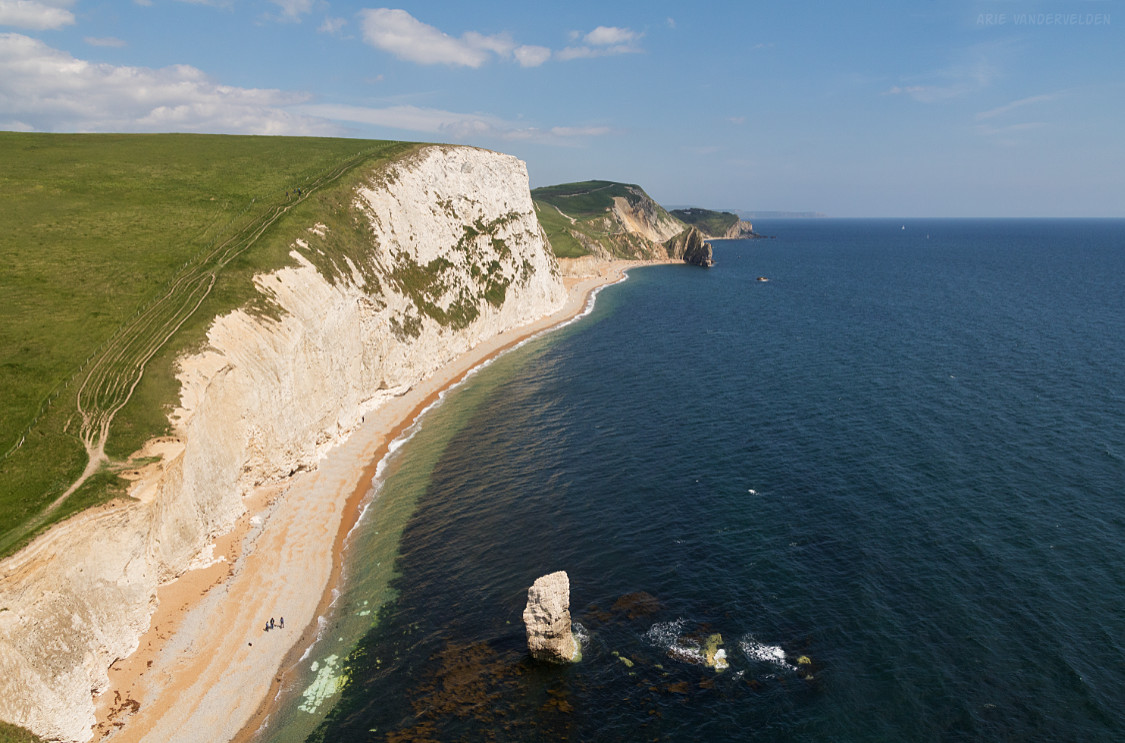 The terrain was really rolling here and there was a lot of up-and-down hiking.  Not difficult, but a leg-burner for sure.  This area along the trail is known as “scratchy bottom”.  I dare not ask why… 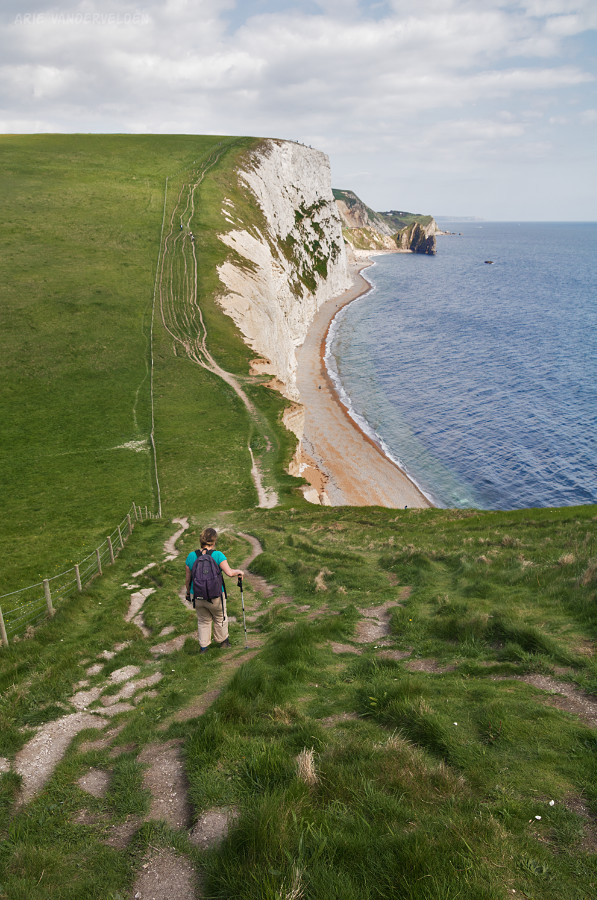 Our destination: Durdle Door.  This archway just outside of Lulworth is one of the most celebrated landmarks along the Dorset coastline.  Not surprisingly it was quite busy with people.  The geology of Durdle Door is quite complex.  The arch is made of steeply tilted Jurassic strata that are in fault contact with the Cretaceous chalk cliffs. 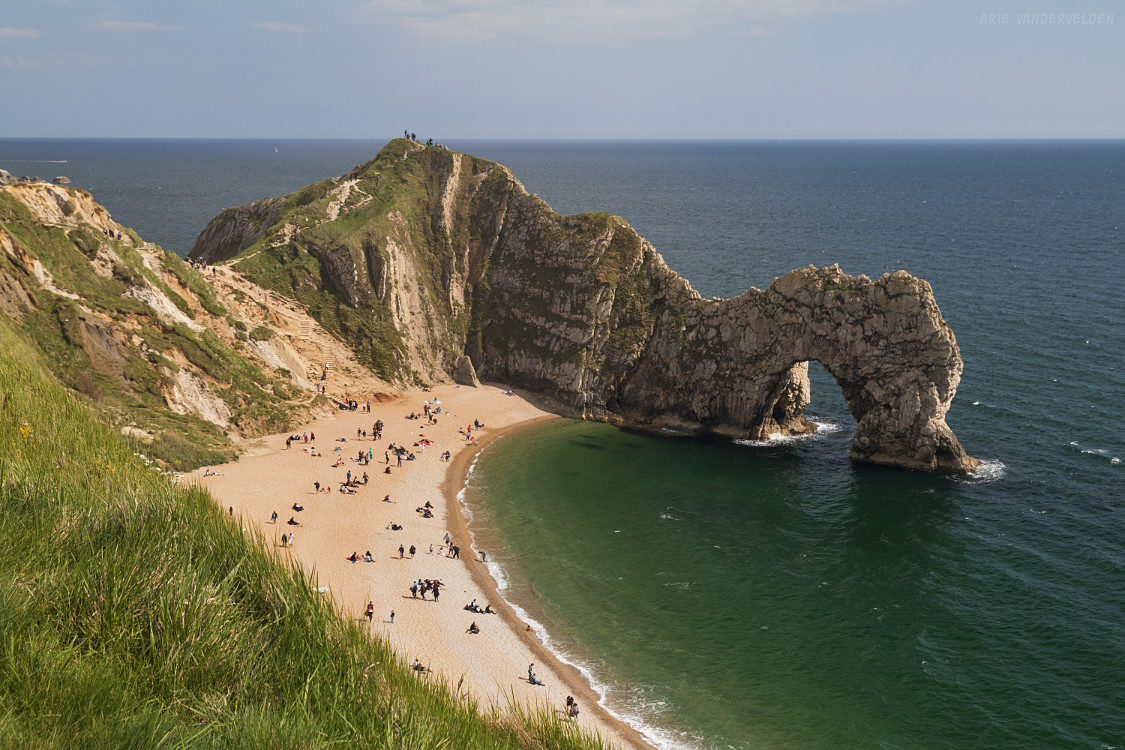 From Durdle Door it was a short walk to Lulworth, where we checked in to our B&B. 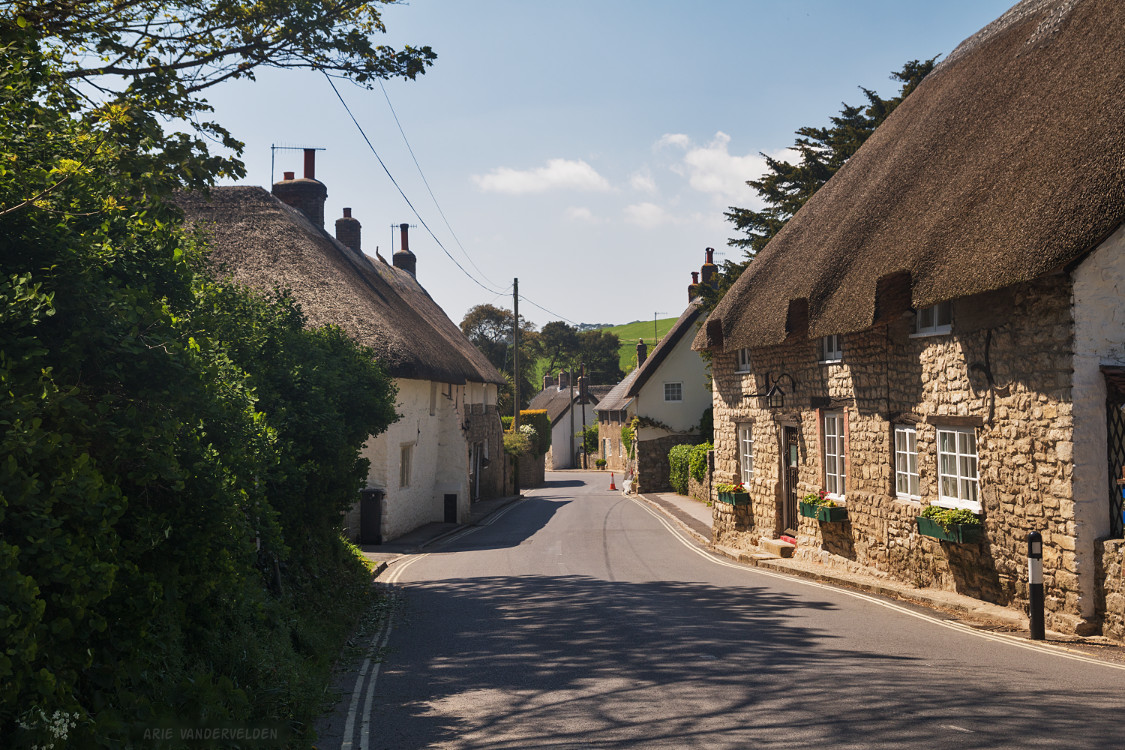 As we were having dinner at the local pub, a light bulb suddenly exploded violently.  Luckily nobody was sitting directly beneath it. Later that evening Diana read that the pub is known to be haunted by ghosts.  Spooky! 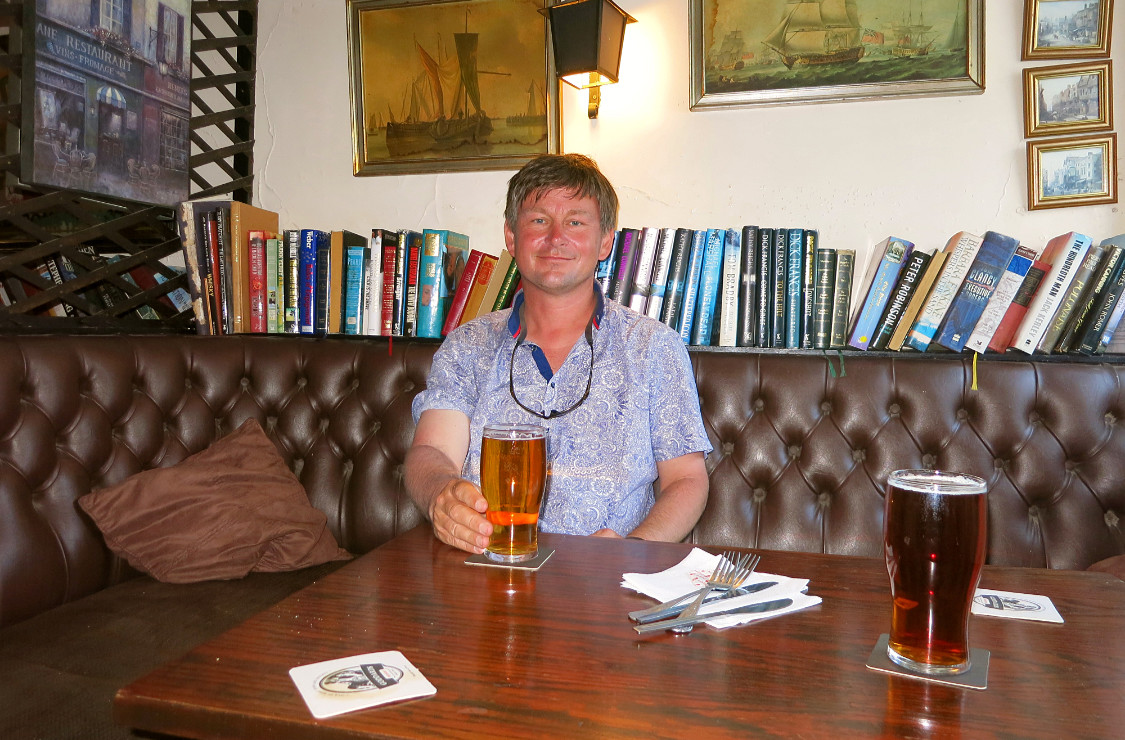 Staying at Weymouth, it is possible to hike around the Isle of Portland in a day.  The loop is about 15 miles from downtown Weymouth and is supposed to have excellent coastal views.  We did not hike this, and that’s probably a missed opportunity.

For those thinking of continuing on beyond Lulworth: be aware that the coastal path cuts through the Matravers military firing range.  It is generally open during the weekends but it may be closed during weekdays.

We stayed at the following accommodations: