Britain’s Jurassic Coast is a classic and well-known hike.  It is part of the Southwest Coastal Path that circles the counties of Somerset, Devon, Cornwall, and Dorset.  We hiked the trail in the spring of 2016, starting from Exmouth, Devon, and ending up in Lulworth, Dorset, a distance of 75 miles or 120 km.

We took the train from London to Exmouth, changing trains in Exeter. 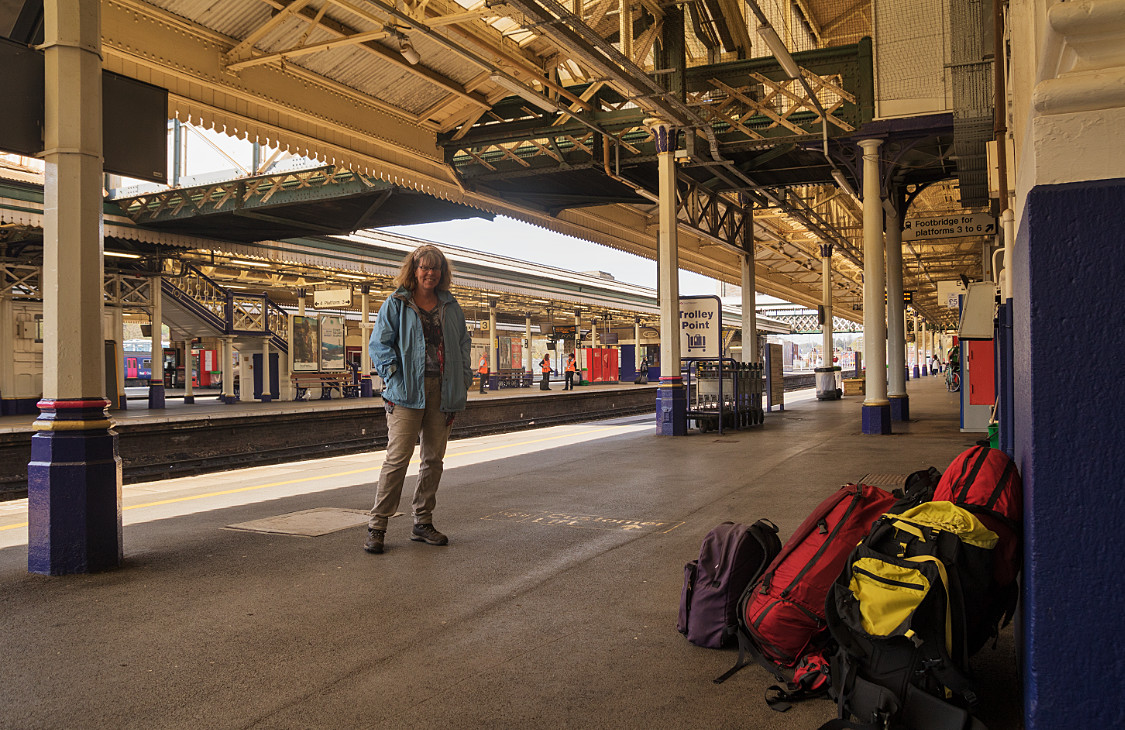 We stayed at the Manor Hotel.  We had a nice view from our room. 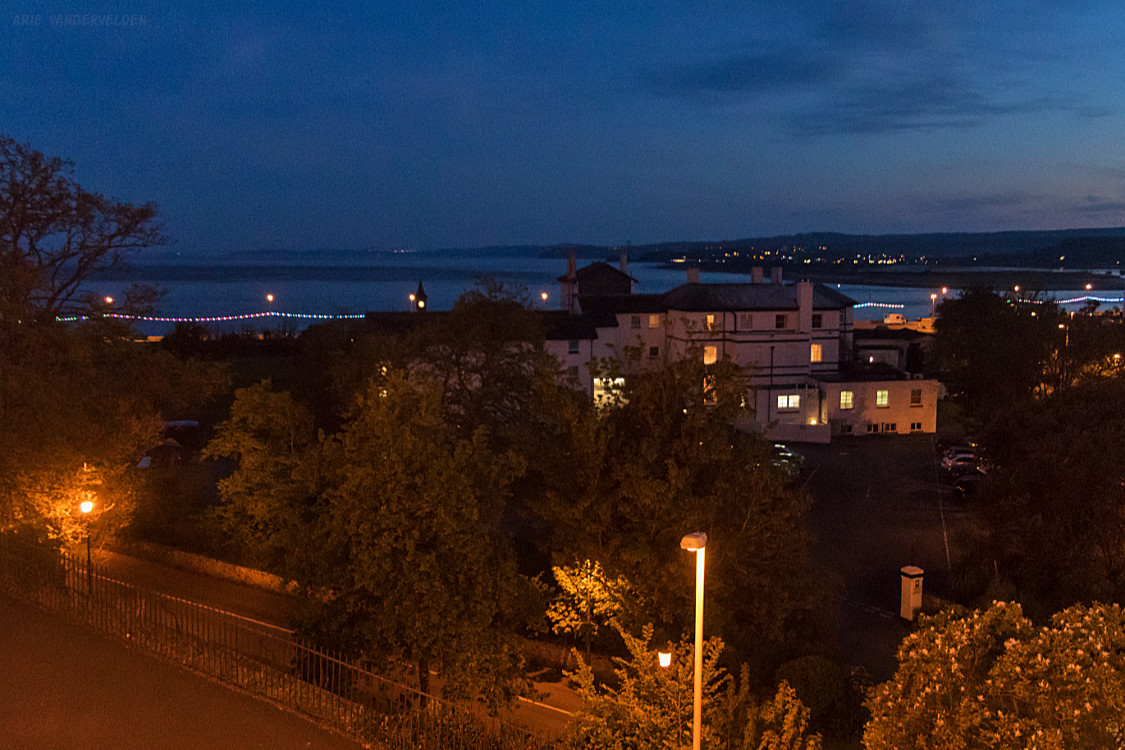 The trail starts along the Exmouth esplanade (seafront paved walkway), and at the end of town it goes up a headland called Orcombe Point. 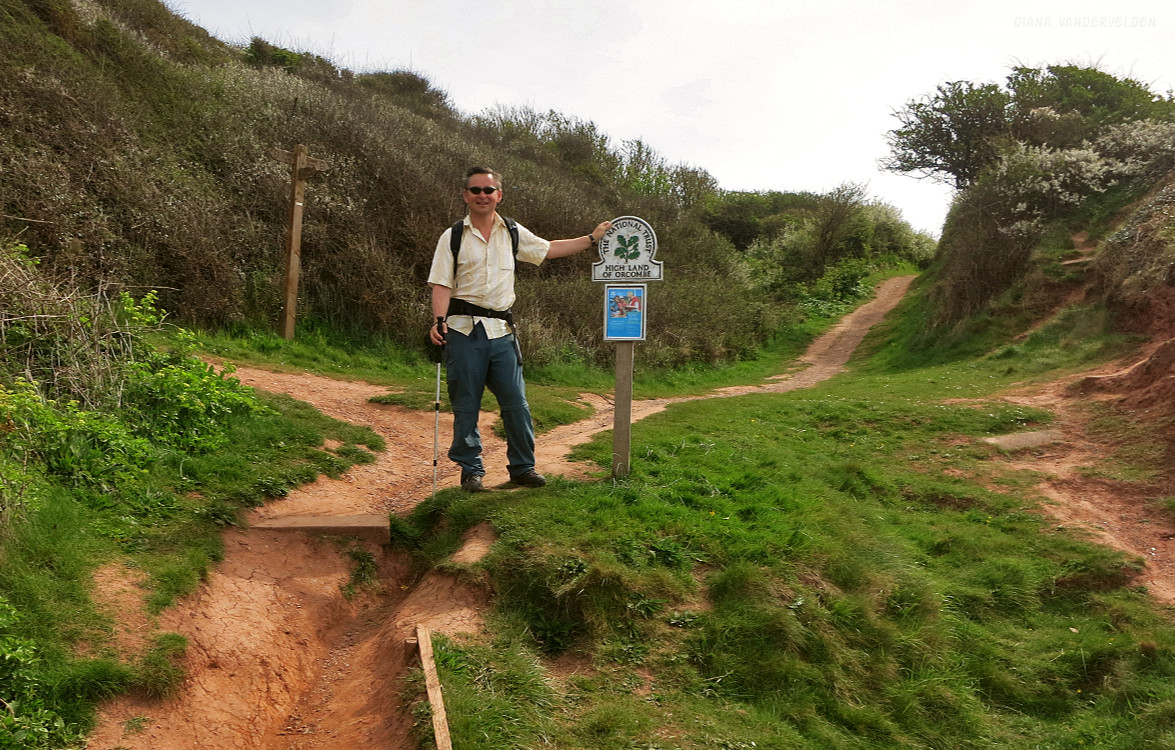 Orcombe Point has a view back towards Exmouth.  At the viewpoint is is the geoneedle, a pyramid of local stone that demonstrates the geology of the area.  It has Triassic rocks at the bottom, Jurassic rocks in the middle, and Cretaceous rocks at the top. 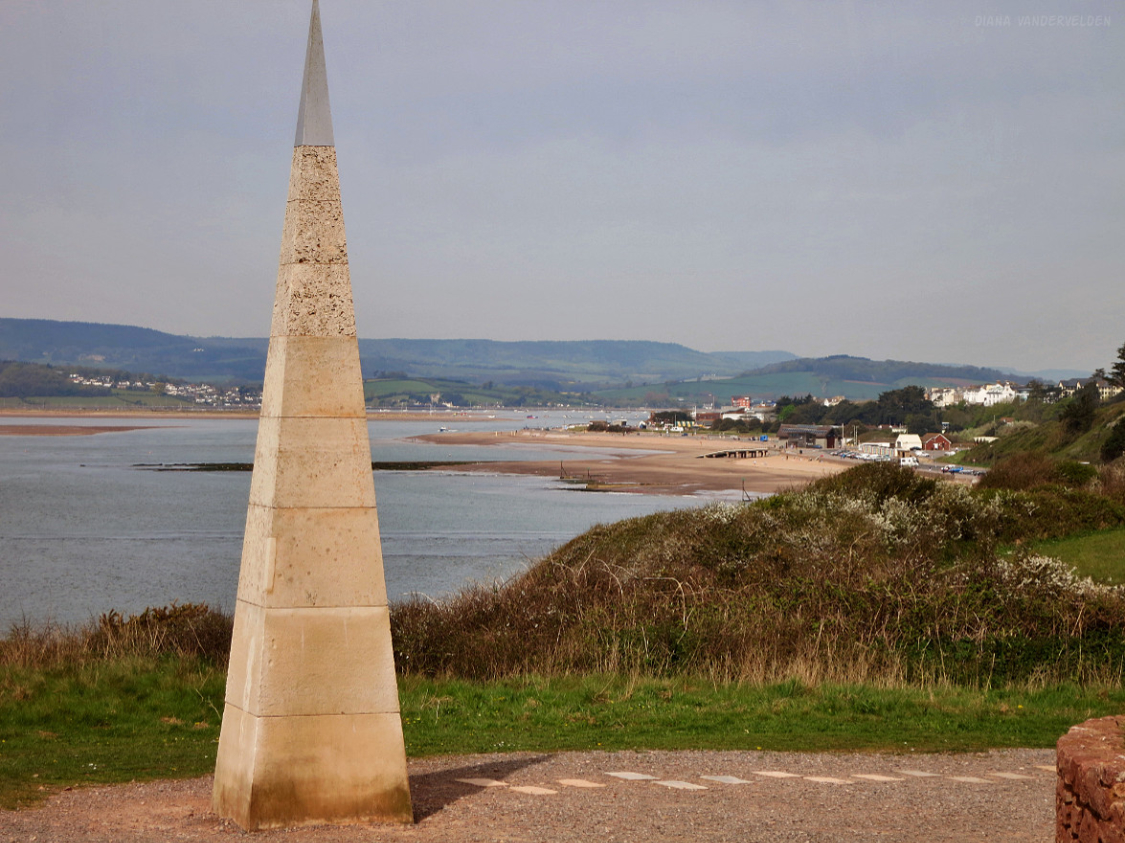 The Jurassic Coast hike starts out in Triassic rocks, goes across the Jurassic in the middle of the hike, and ends in the Cretaceous.  So, our trail would take us gradually from older to younger rocks.  In my opinion, this itinerary really should be called the Mesozoic Coast hike.

During the Triassic period, this part of England was part of the supercontinent Pangea.  Desert-like conditions existed, and the rocks exposed in the coastal cliffs are red desert sandstones. 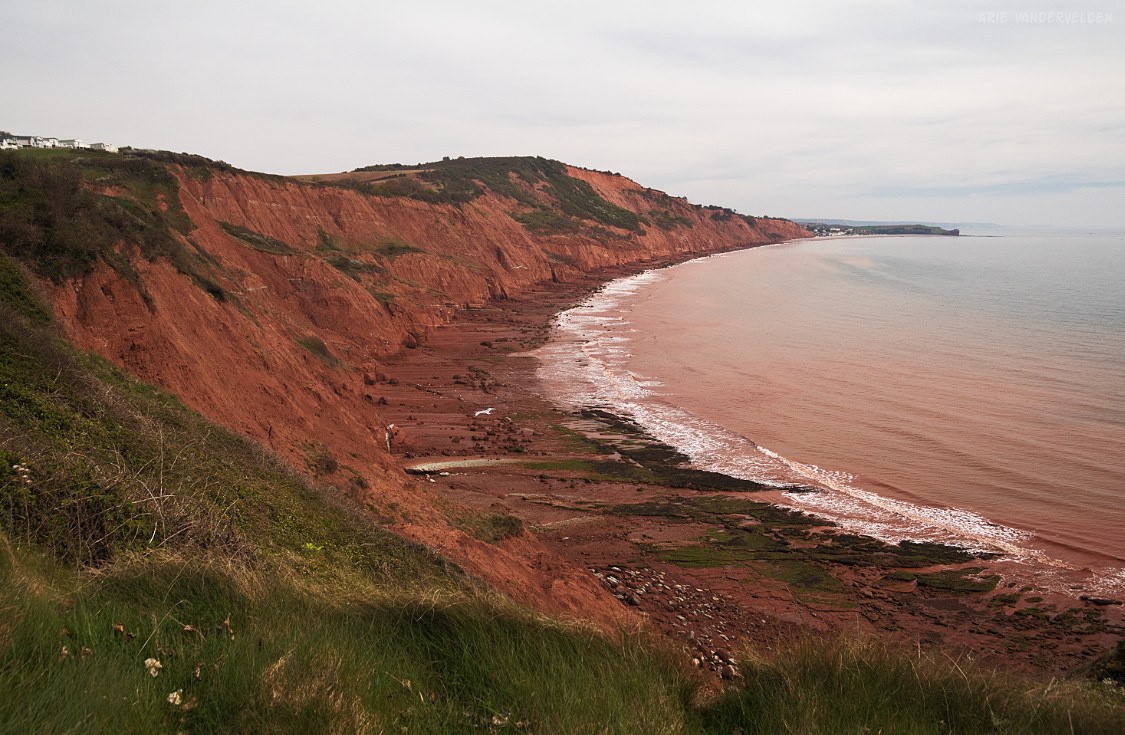 The trail led past the edges of farmers’ fields.  The red soils looked fertile. 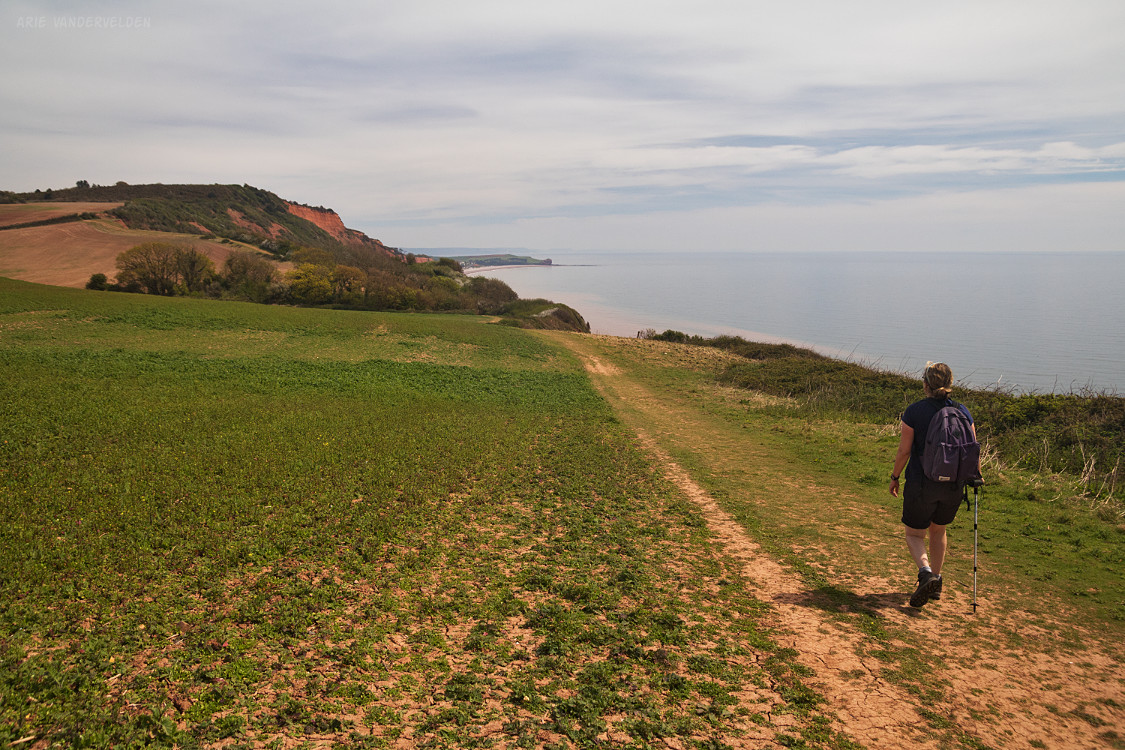 The hiking was generally easy, and there were some wonderful coastal views along the way. 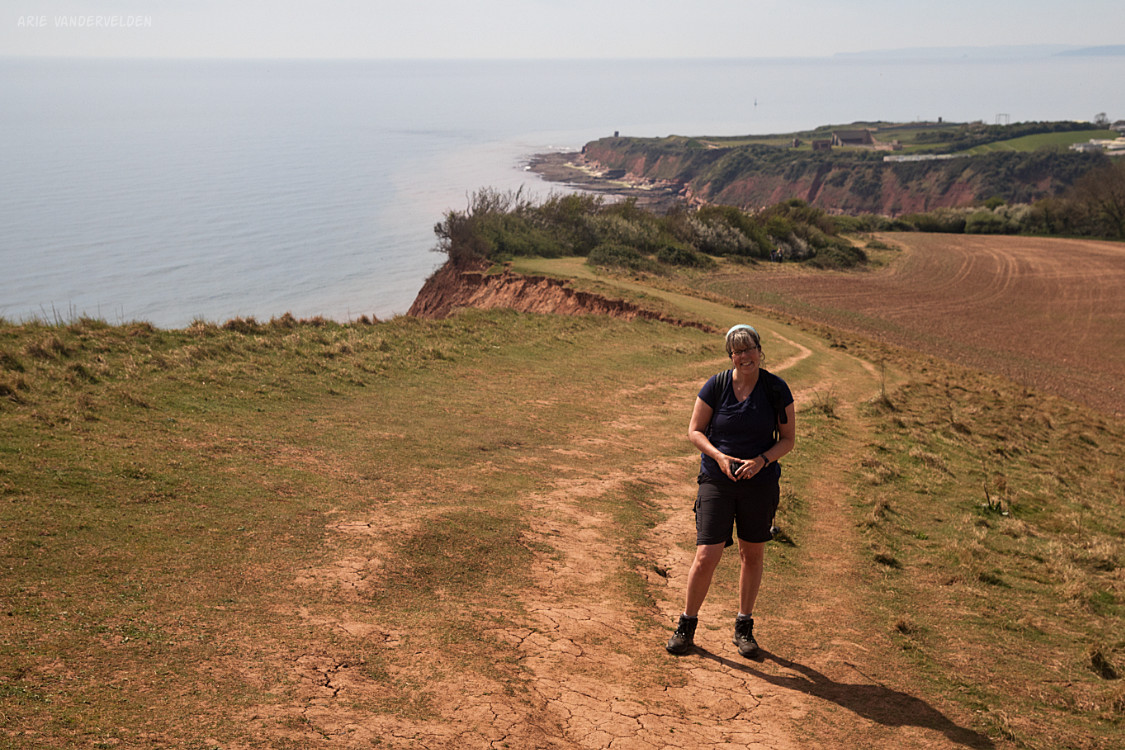 At the town of Budleigh Salterton there is a long shingle (pebble) beach.  We stopped to have tea and a scone. 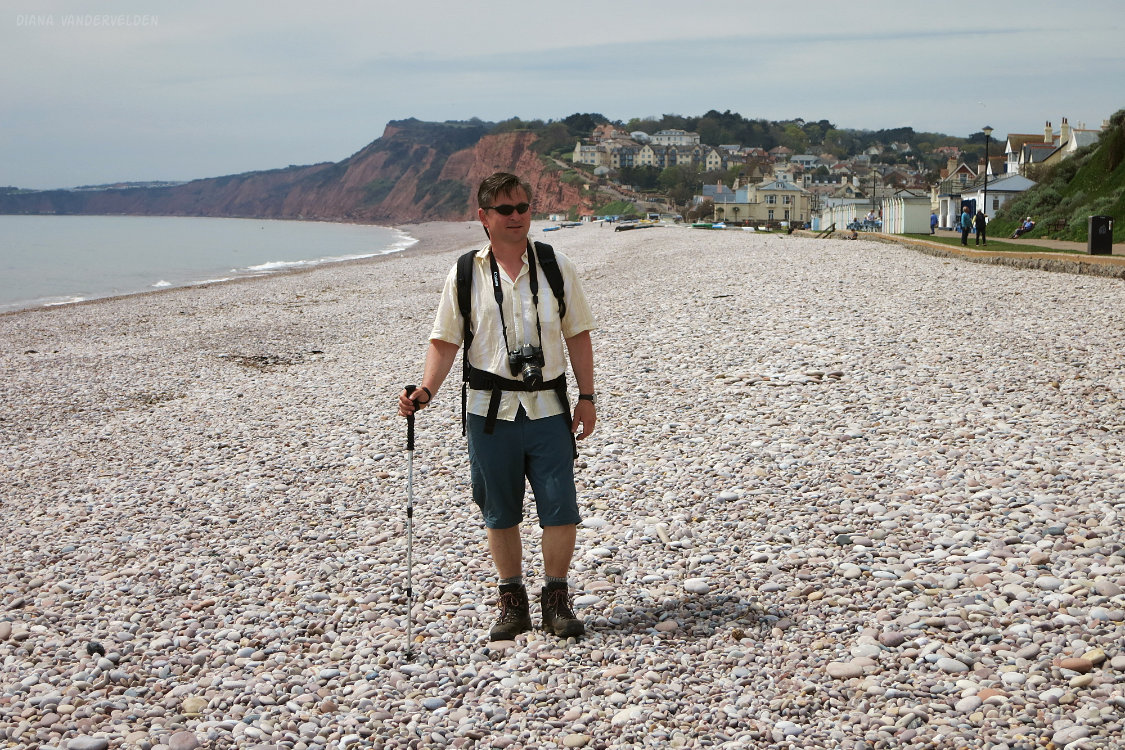 At the far end of Budleigh Salterton there is a rivermouth.  The nearest bridge is about half a mile inland, requiring a detour. 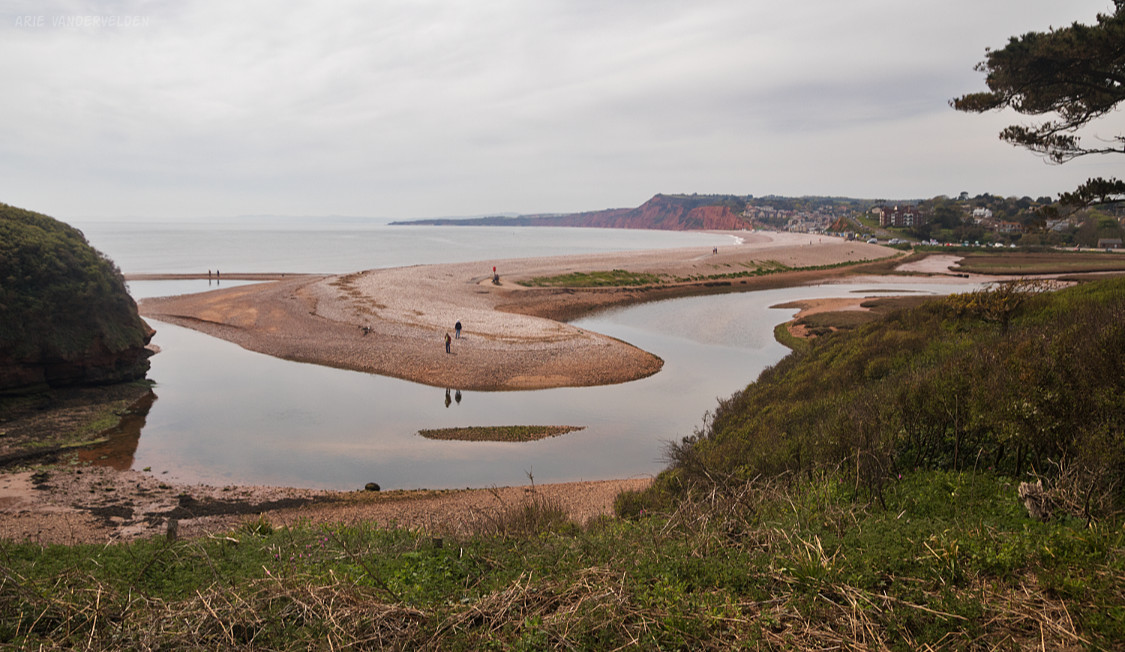 Ahead, the trail once again wound between the cliff edge and the edges of farmers’ fields. 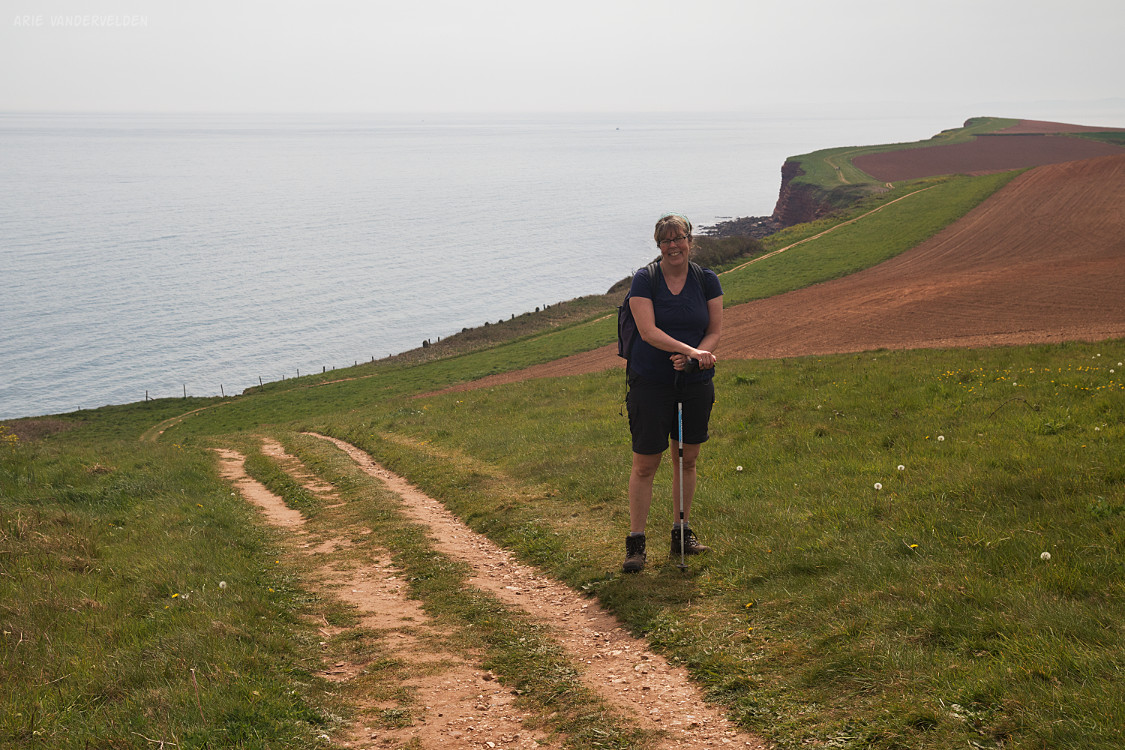 There were occasional views of the Triassic coastal cliffs. 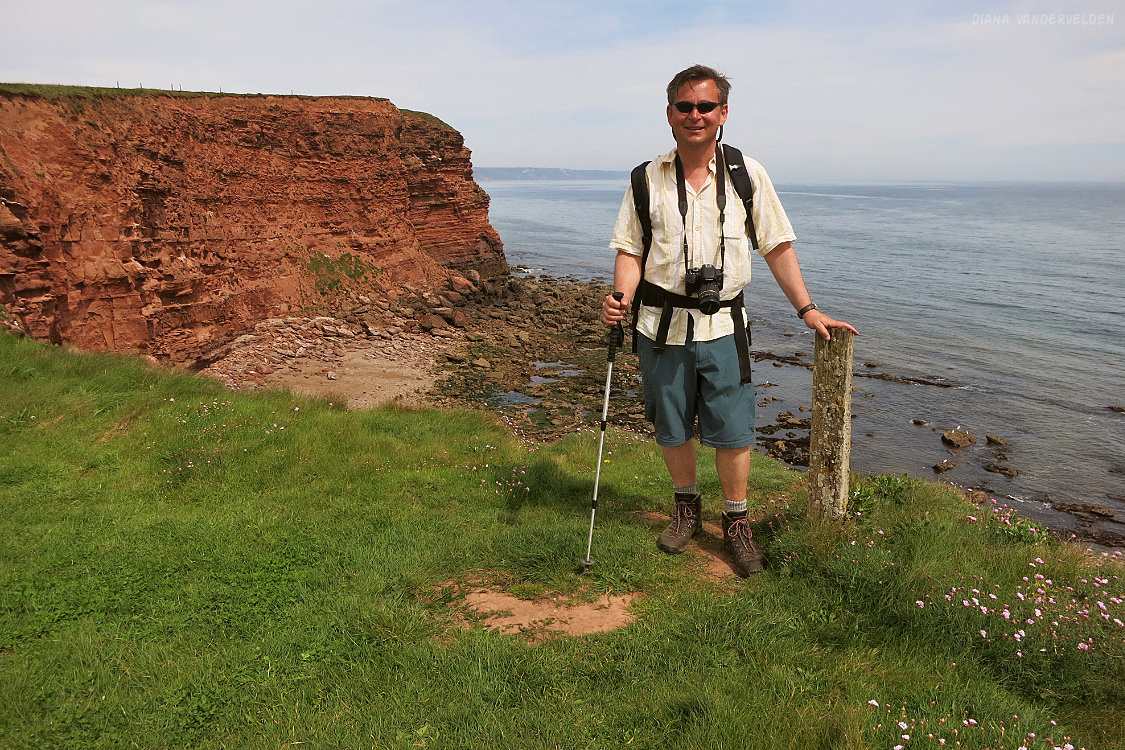 Inland are rolling hills, looking like a quilt of pastures stitched together with dry stone walls. 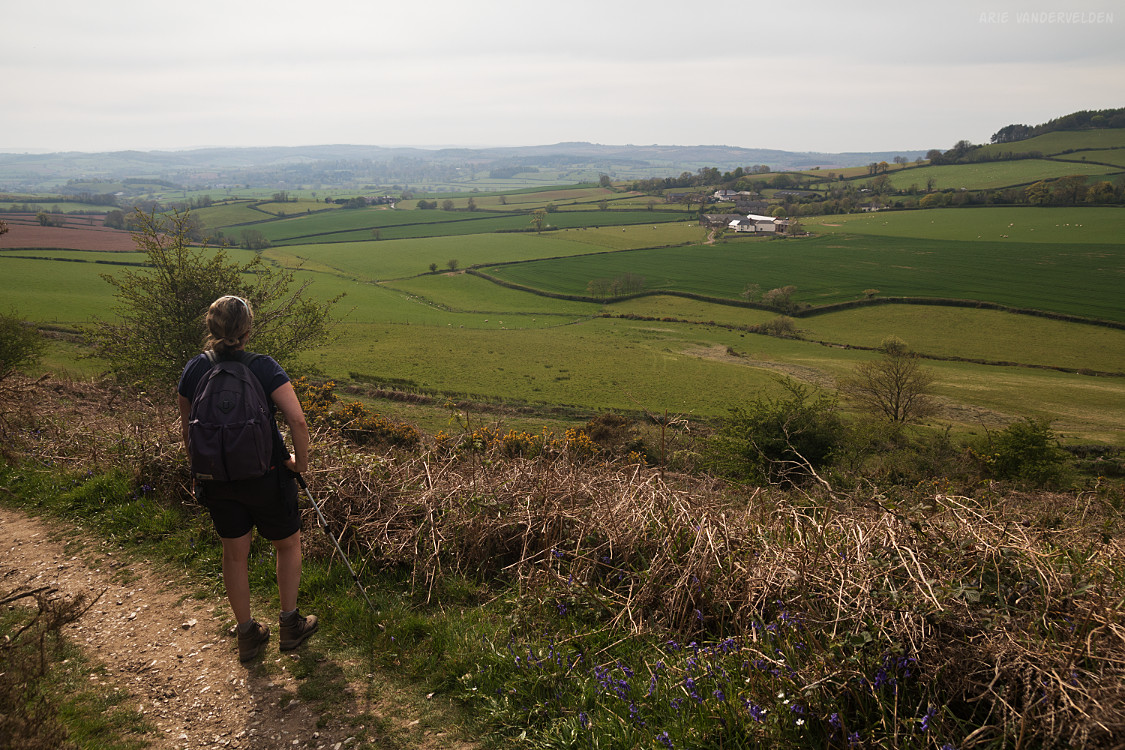 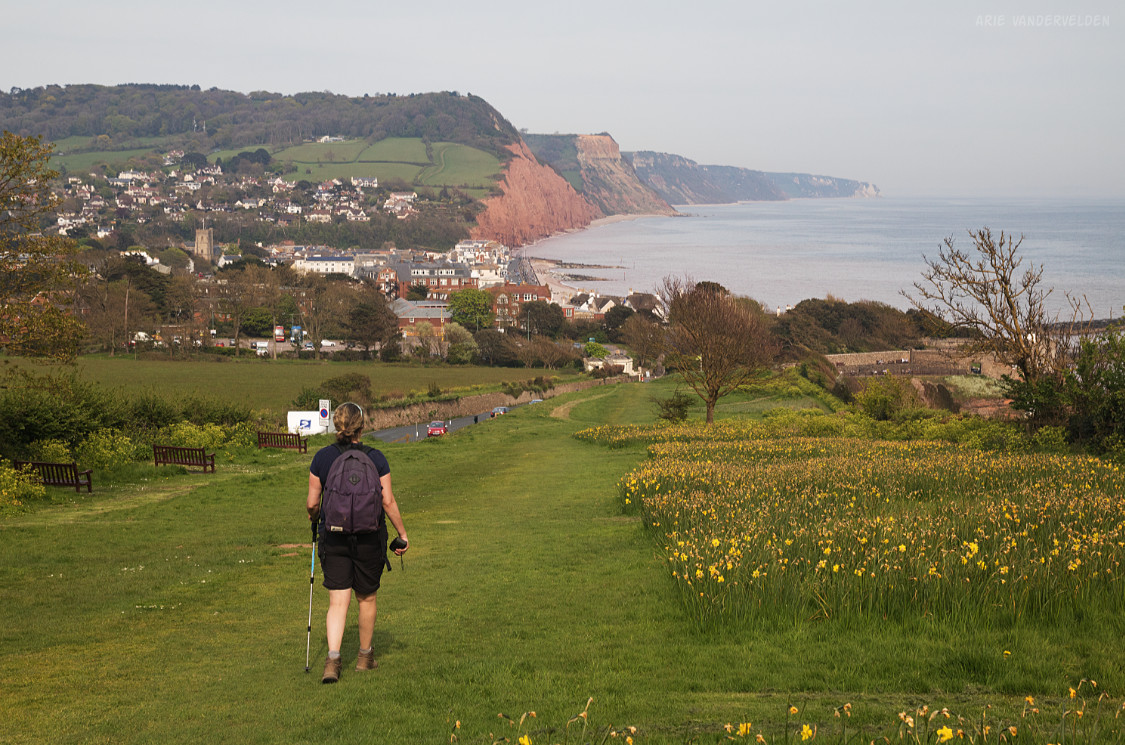 We stayed in Sidmouth two nights due to limited accomodation availability further down the coast.  I had booked a rather fancy hotel in Sidmouth.  The hotel is an old mansion, set in nine acres of botanical gardens, right in the middle of town.  The price was half of other, much simpler hotels in town.  I knew there had to be a catch, but given that it had good reviews we decided to take a chance.  When we arrived the catch revealed itself.  The hotel is run by Christians, and has a strong evangelical theme.  That was all fine with us, and we took some pleasure in secretly mixing up gin and tonics in our room, while down the hall a bible retreat was being held. 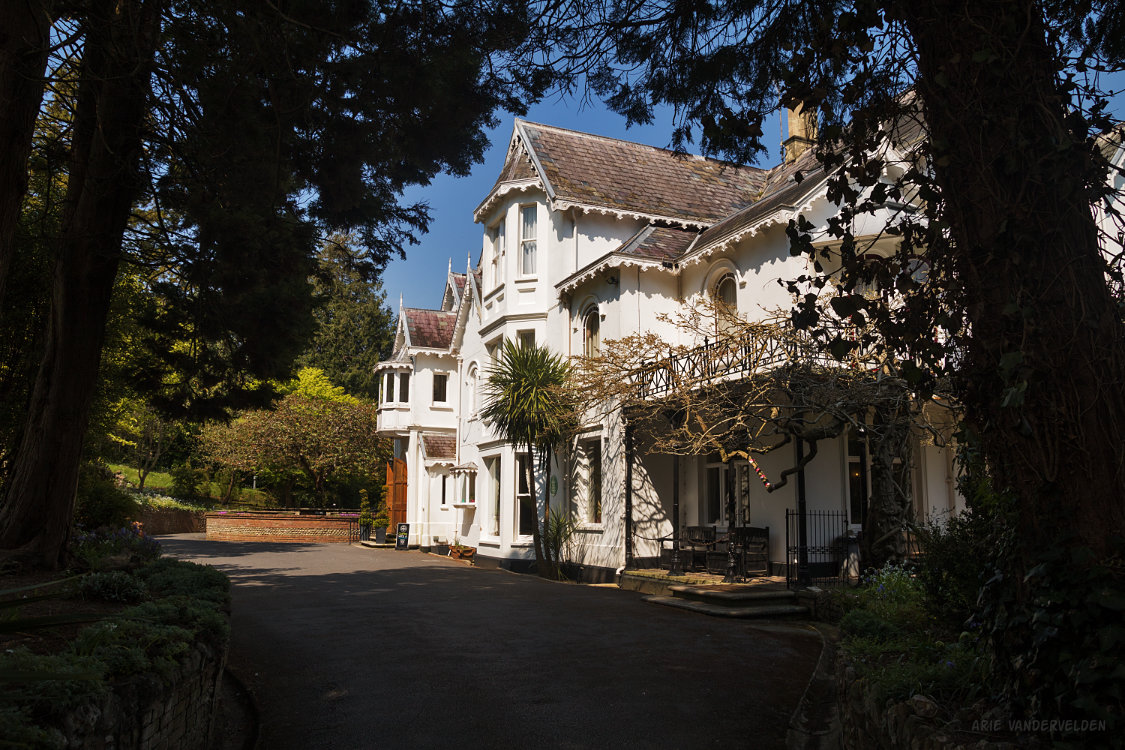 On our day off, we wandered up the red sand beach. 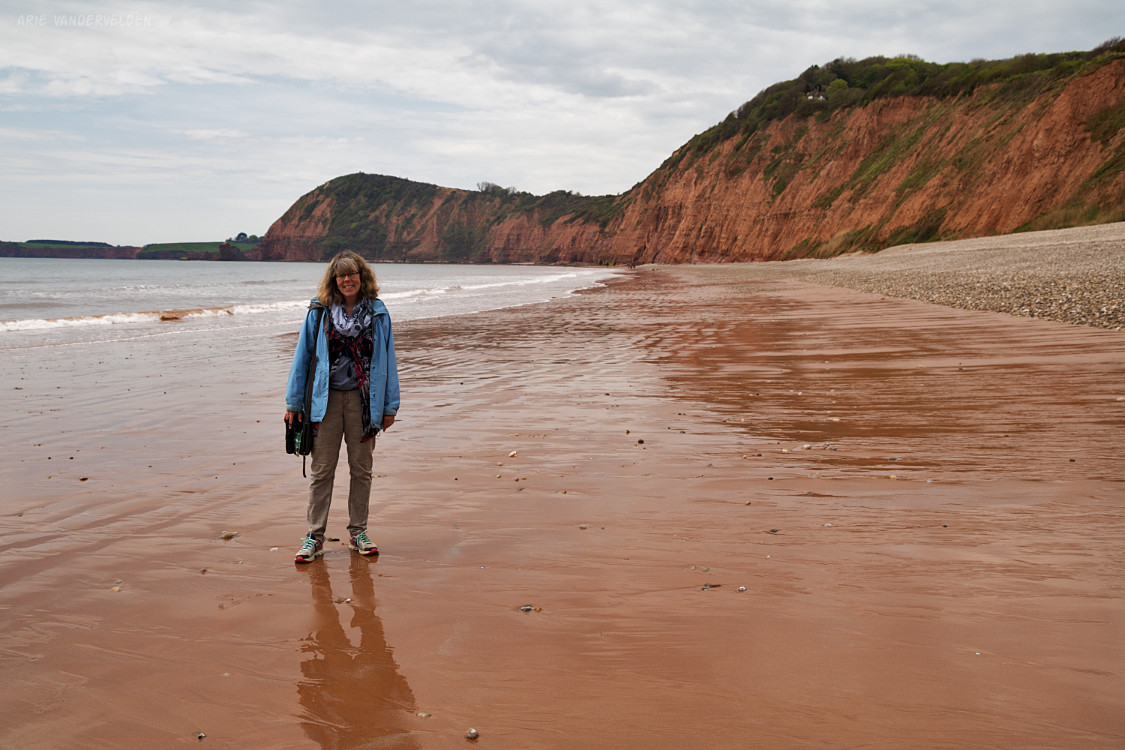 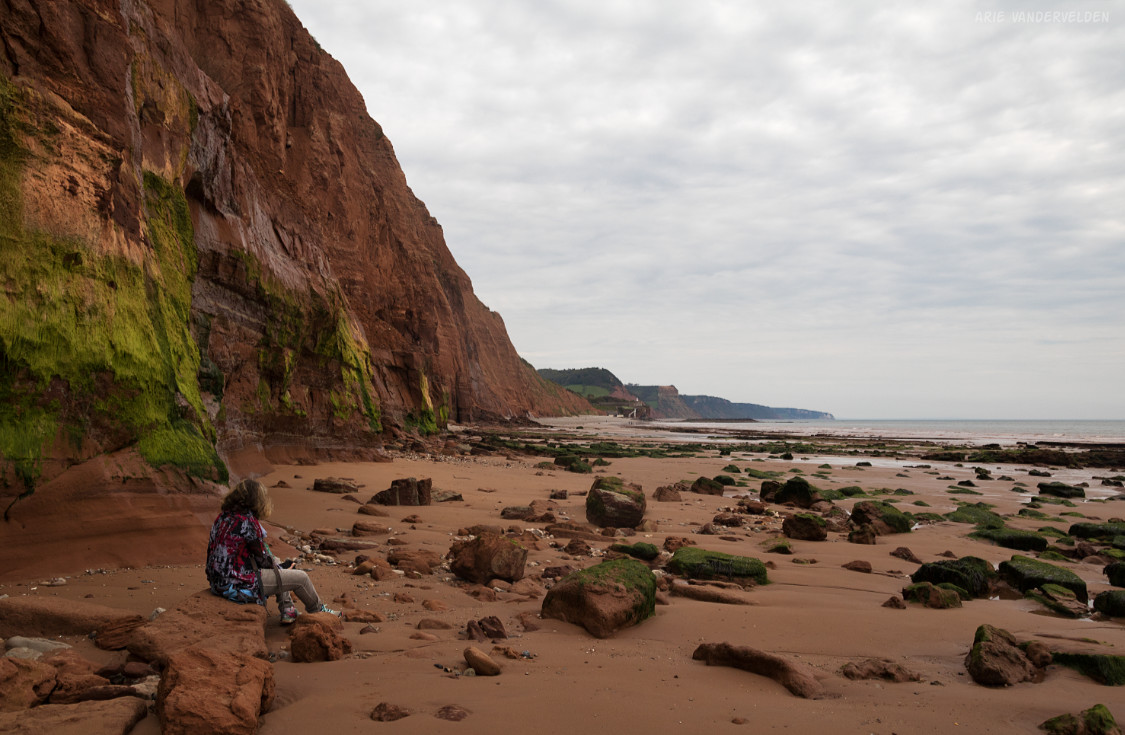 In the afternoon we visited a tearoom and had scones with clotted cream. 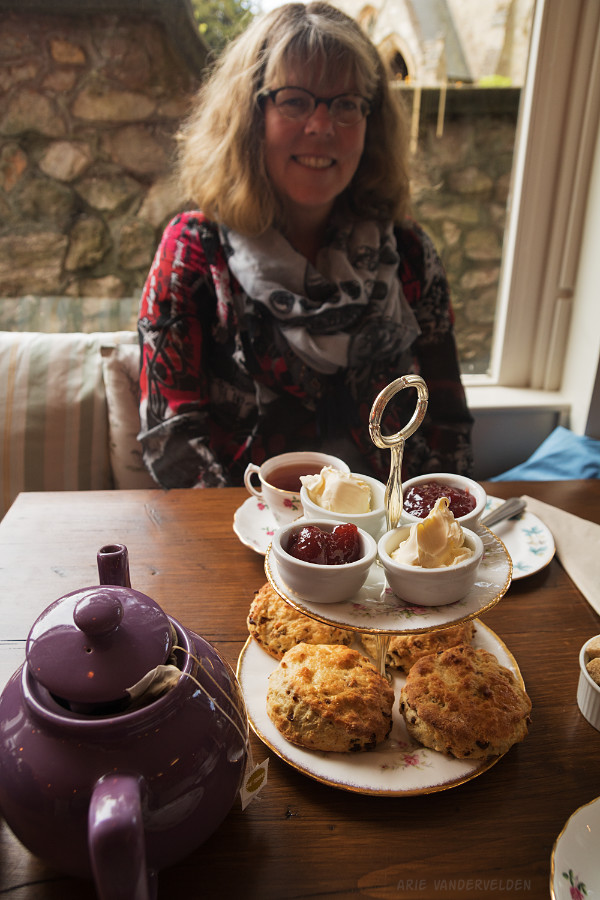 Right out of Sidmouth, the trail led steeply up a hill.  Near the top of the hill was a woodland carpeted with bluebells. 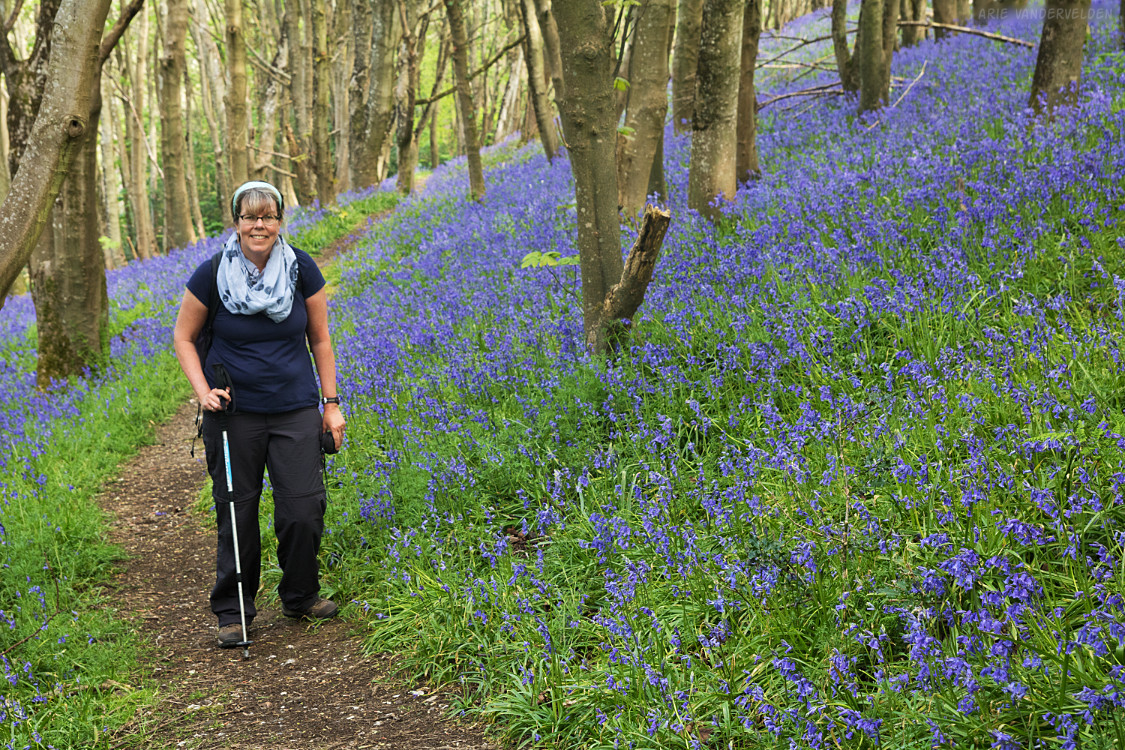 As soon as the trail reached the hilltop, it went right back down into another valley. 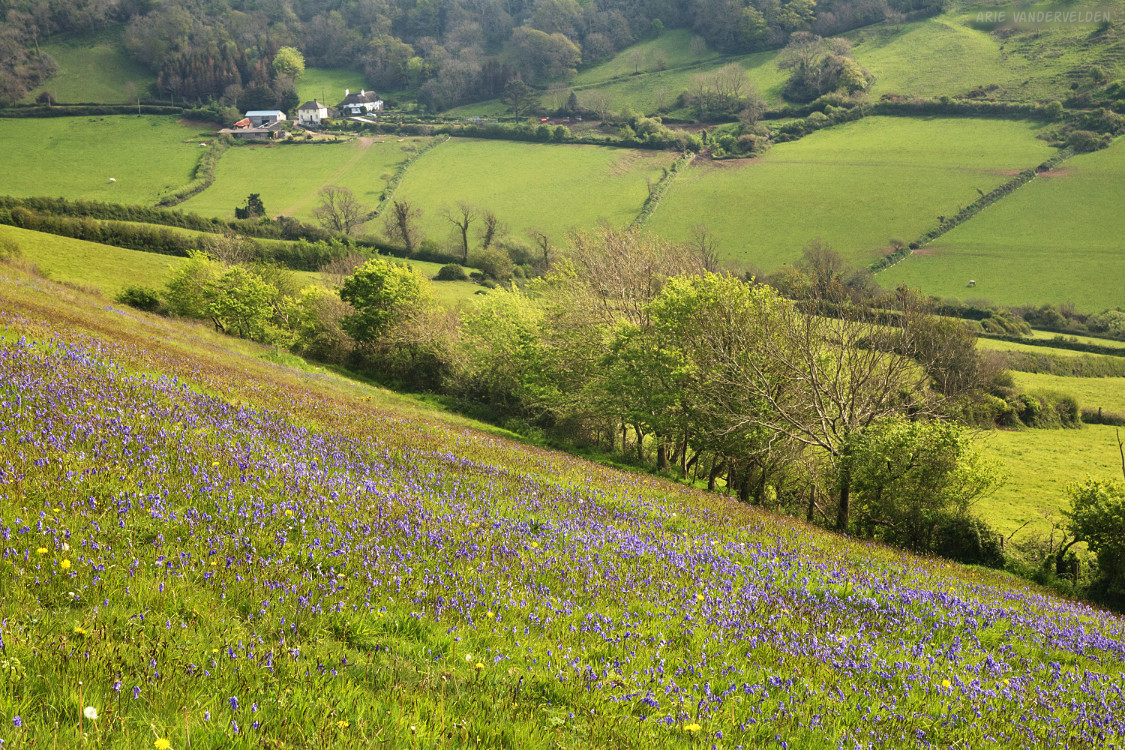 The scenery was very pretty here.  We are fans of the British real estate show “Escape to the Country”, and it felt like we were right in the scene. 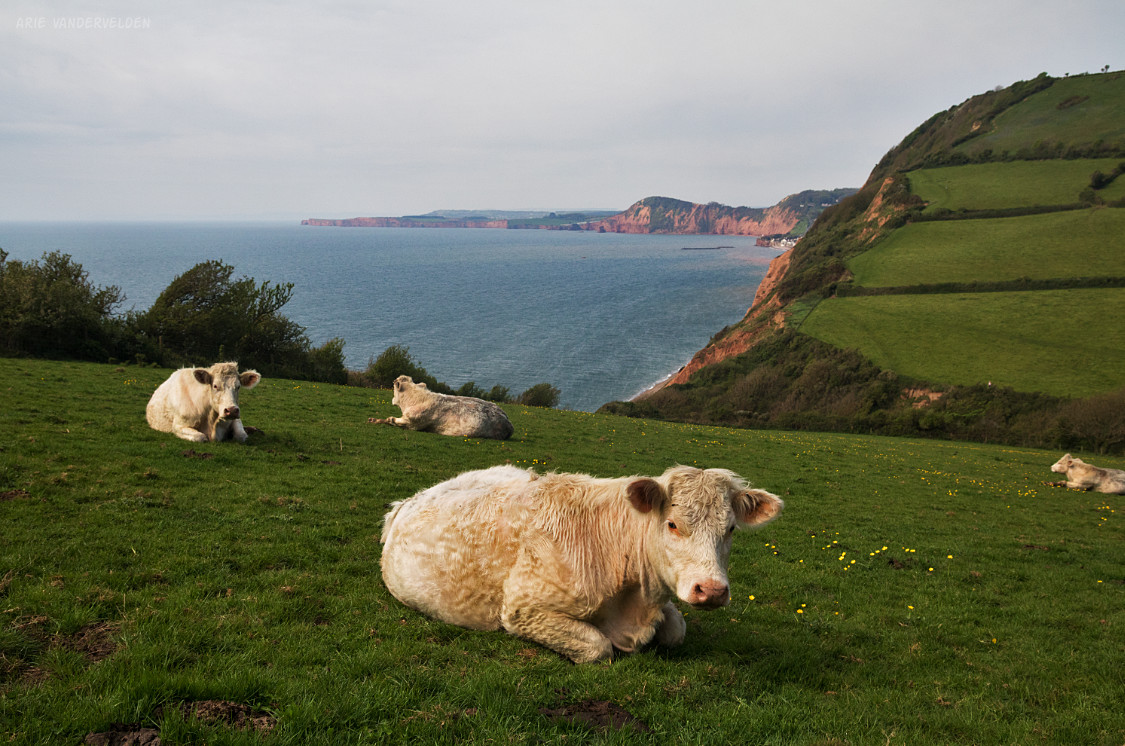 After the next hill, there was yet another valley and the trail descended right down to the beach.  It was a good spot for a cup of tea. 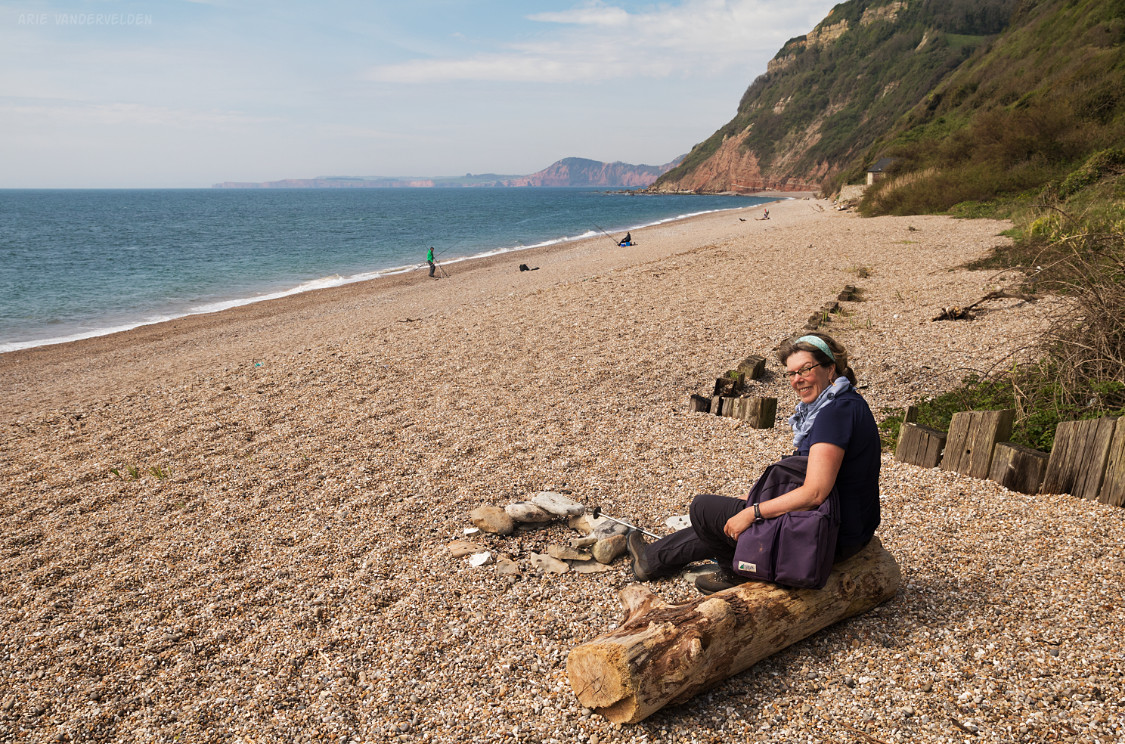 After our refreshment we had to climb right back up again.  The trails are stepped, which helps, but in many places the steps are more than a foot high which is tiring. 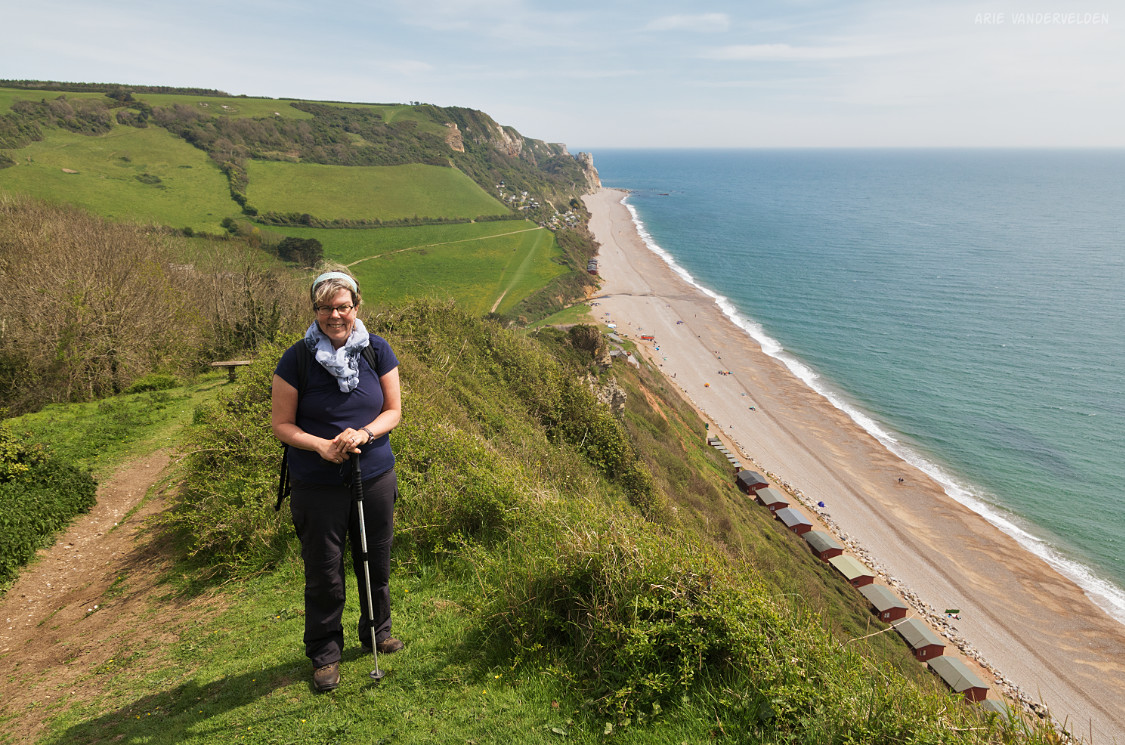 There was a nice view of the village of Branscombe. 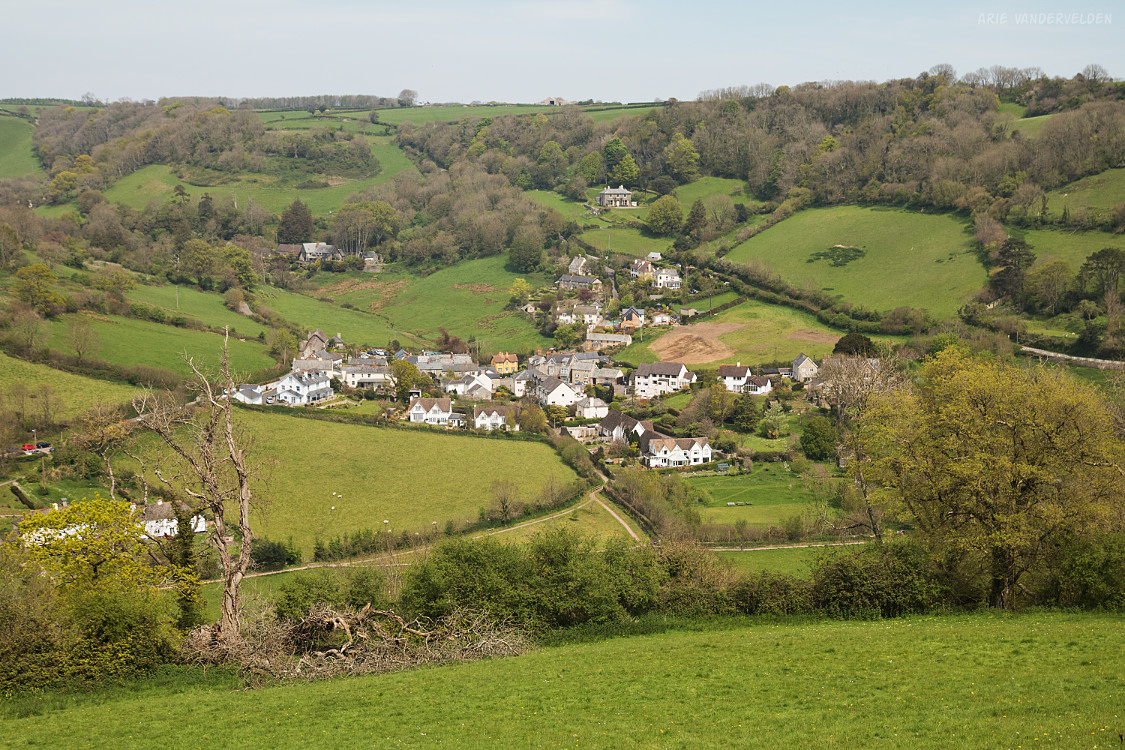 Near the village of Beer, white chalk cliffs suddenly make an appearance. 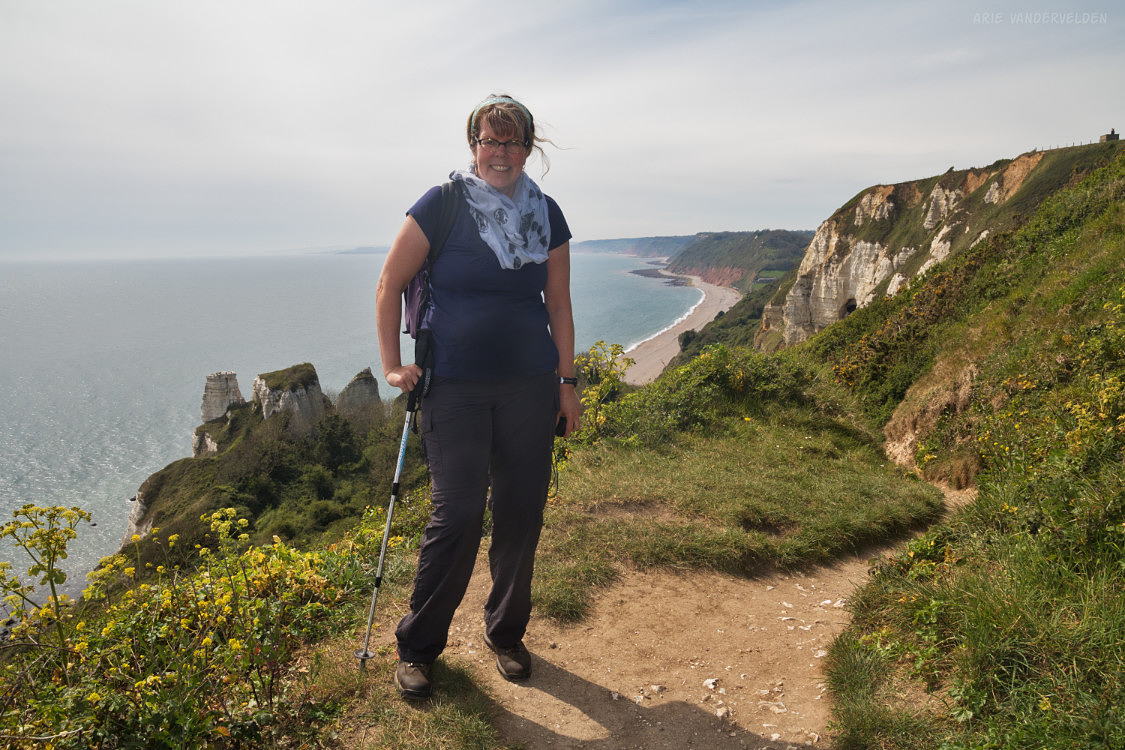 The Chalk cliffs are Cretaceous in age.  Here, the intervening Jurassic rocks are missing.  Diana took this photo looking down the coast towards Seton.  In the foreground are the white chalk cliffs of Beer, and in the distance near Seaton are more red Triassic desert rocks.

We stopped for an ice cream in Beer, before hiking the final mile or so hike into Seaton, our destination for the evening. 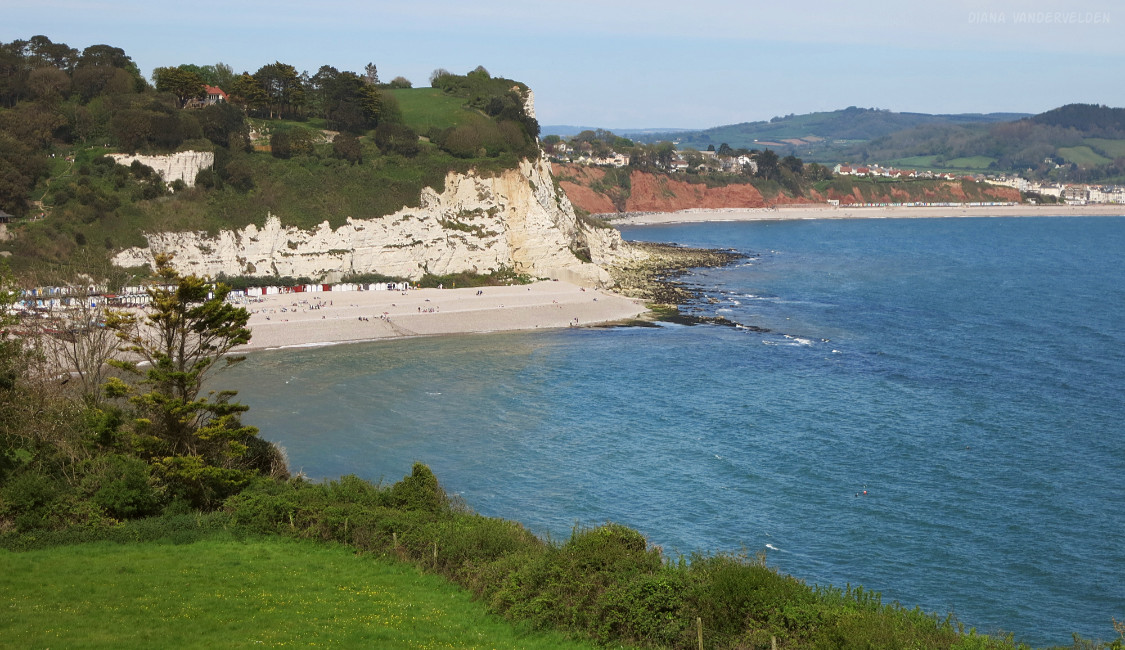 The Jurassic Coast trail is located in the south of England. 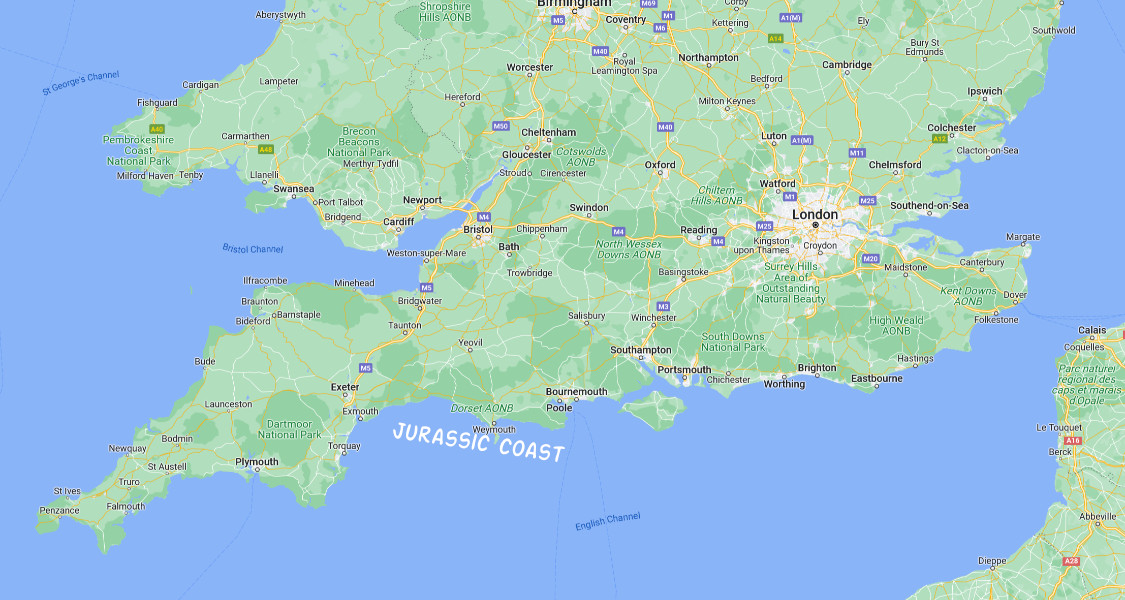 There is a good train connection from London to Exmouth.  A bus connects Lulworth with Wool and Wareham, both of which have train stations for onward travel.  Weymouth also has a train station.

Here are some tips for organizing a long-distance hike in Britain.  We had our luggage shuttled between accommodations by luggagetransfers.co.uk.  Here is a day-by-day guide to the southwest coastal path.

We stayed at the following accommodations:

Go to part 2 of our Jurassic Coast hike.