This is part 2 of our Jurassic Coast hike.  Read part 1 here.

After a leisurely breakfast in our B&B and a nice conversation with the owner, we set off on the trail.  It began by crossing a golf course.  It felt like we were trespassing, but the way was signed.  After the golf course the trail entered an area called “the undercliffs” which are a series of slump blocks covered in dense vegetation. 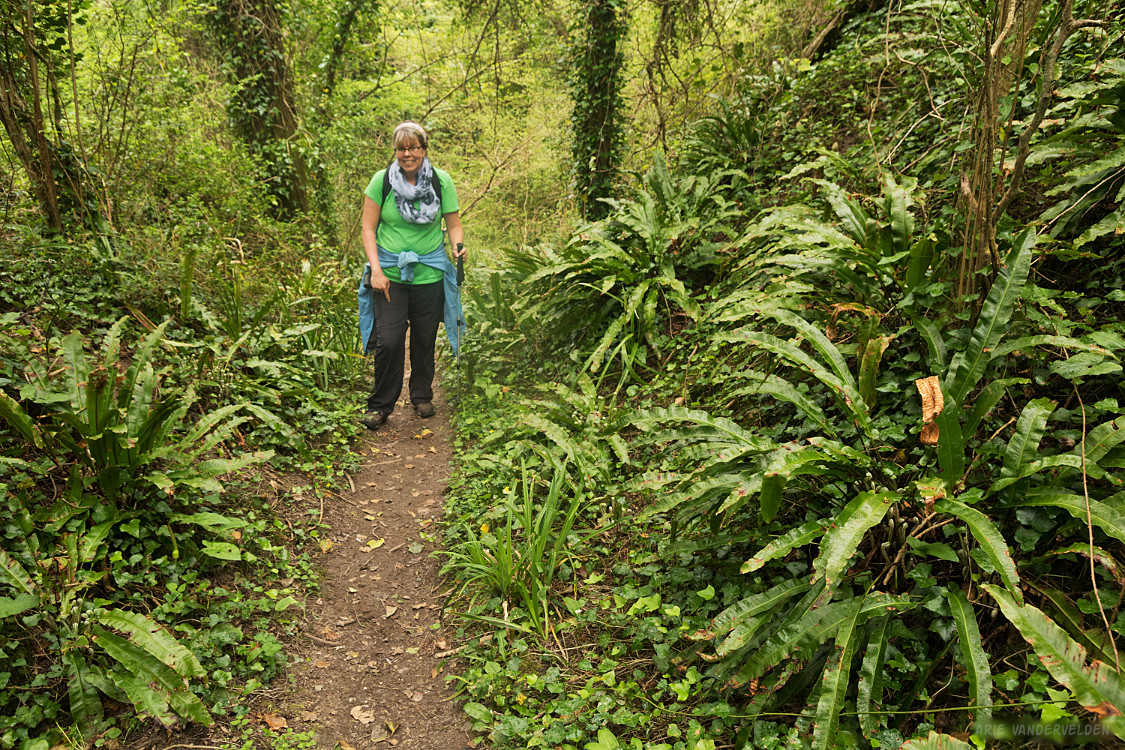 It had started as a cloudy day, and now it was starting to drizzle.  It didn’t matter because we were protected in the dense foliage.  It felt like hiking though a rainforest. 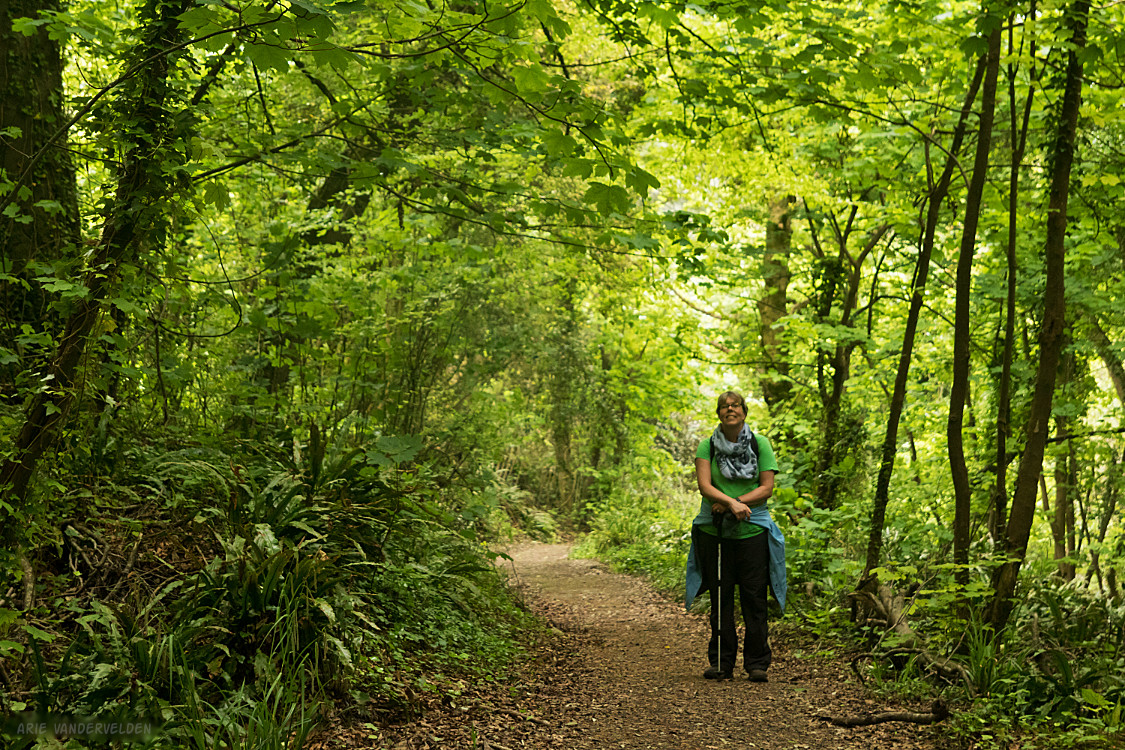 In some places there were nice flowers.  Birdsong abounded in the forest. 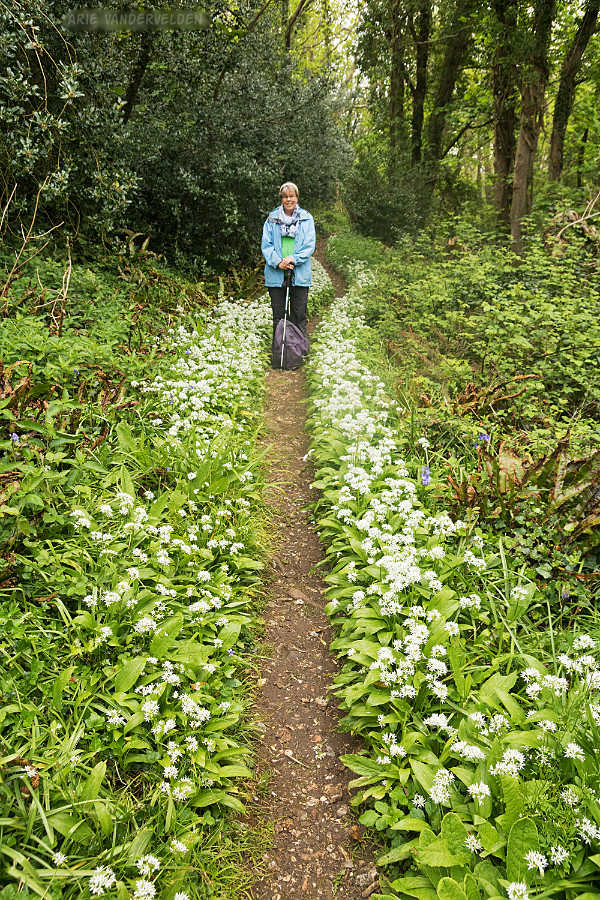 The route was very well signed.  “Follow the acorn” was our motto. 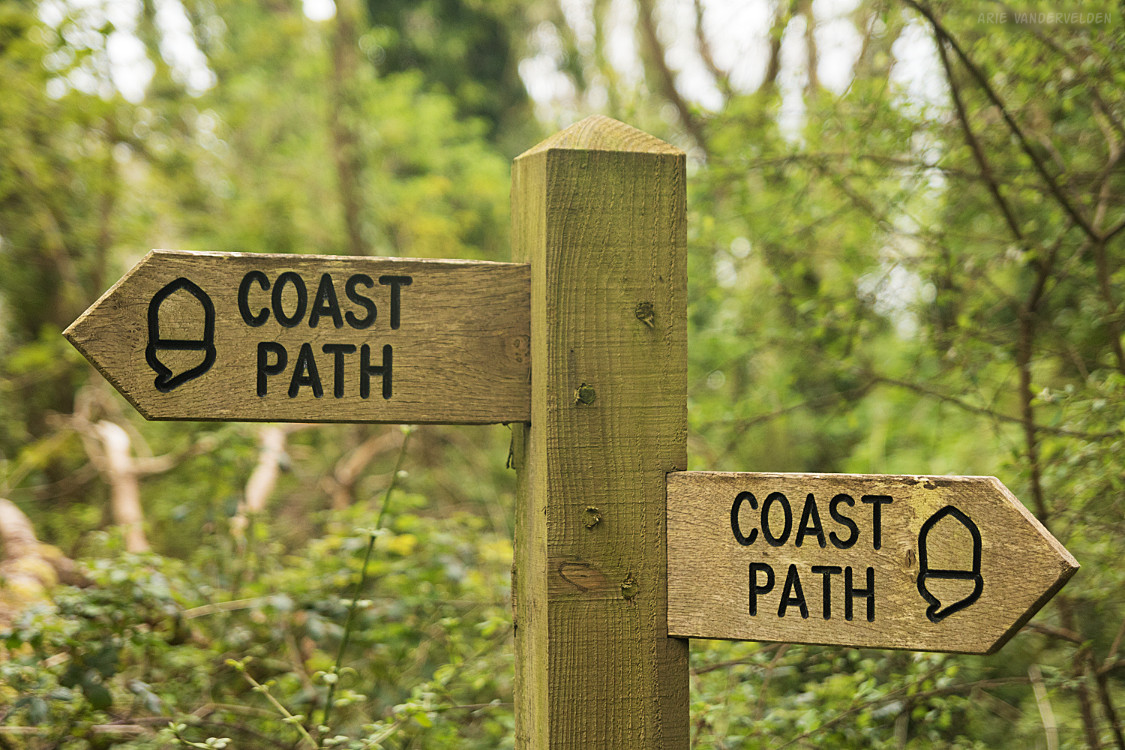 Somewhere in the undercliffs we crossed the border into Dorset, and we went from walking on Triassic rocks to the Jurassic. 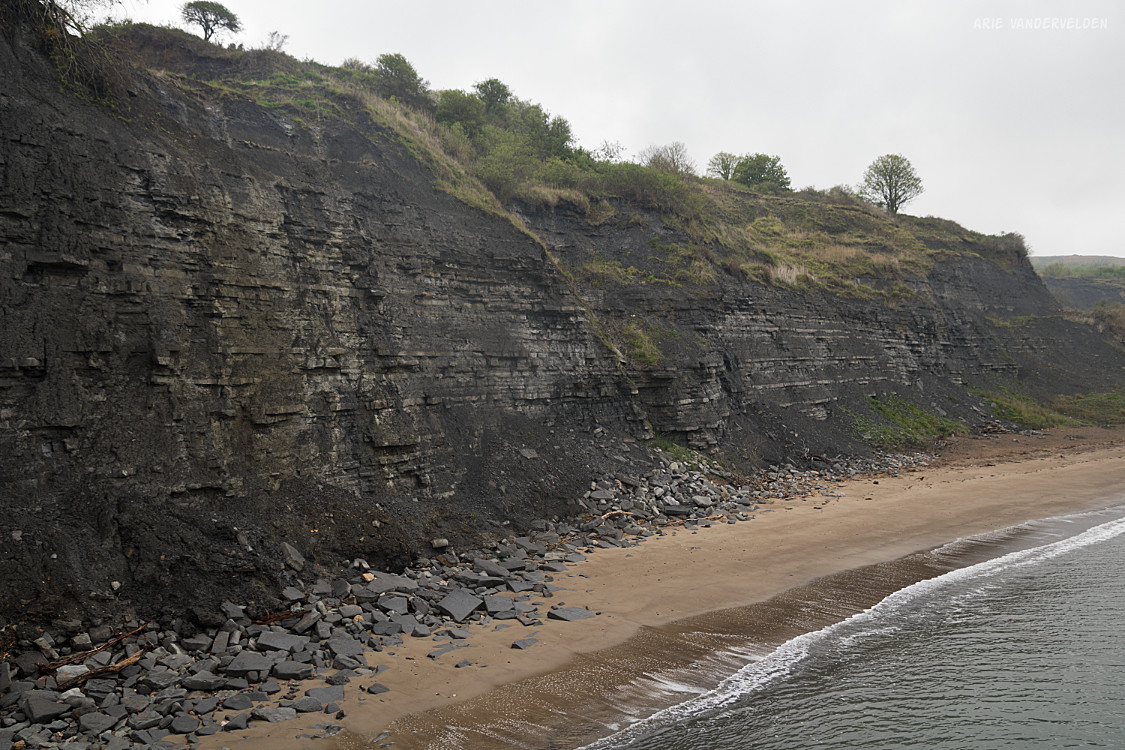 These cliffs of charcoal-grey rocks look somewhat unassuming, but they are packed with fossils.  In the Jurassic, the desert conditions came to an end.  Pangea started to break up, and England was covered with a shallow sea that teemed with life: plesiosaurs, mosasaurs, nautilus-like ammonites, snail-like gastropods, and squid-like belemintes.  Their remains settled on the sea floor and were well preserved. 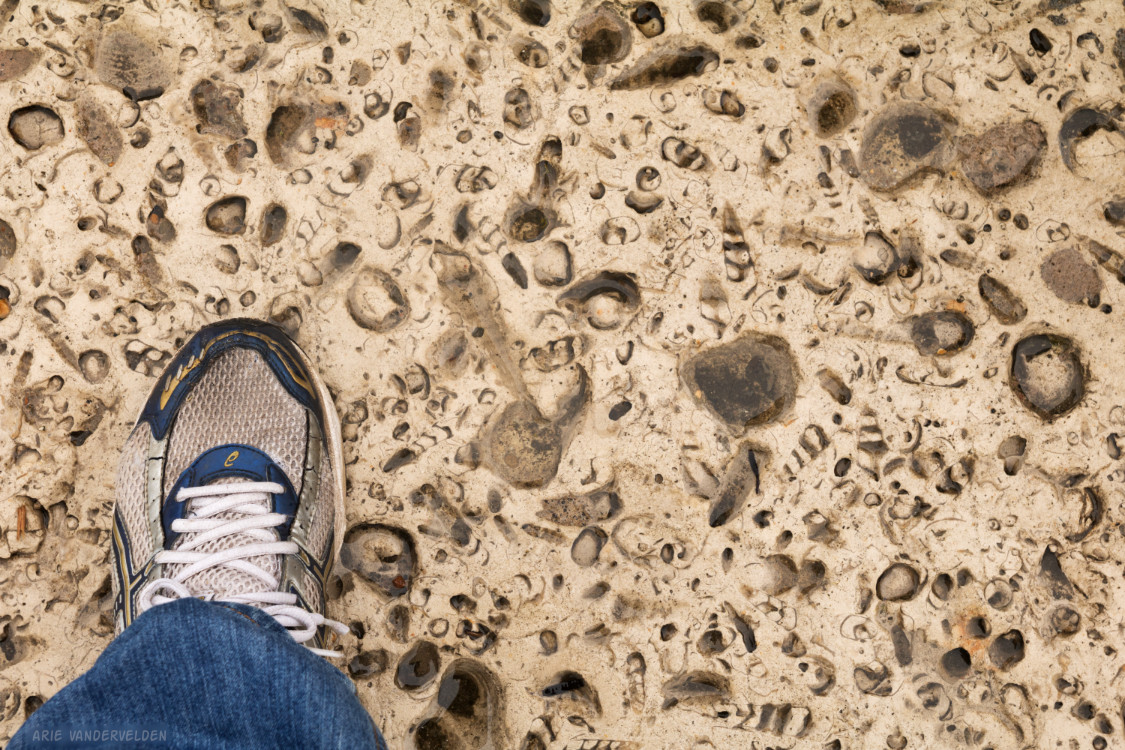 Lyme Regis is a nice little town.  It’s quirky, and not nearly as slick as I thought it would be given how popular it is.  Rambling little shops selling used books, antiques, fossils and rocks, and sometimes all three of those.  Its most famous resident was Mary Anning, a self-taught geologist who lived here from 1799 to 1847 and excavated fossils from the local cliffs.  Her contributions to the field of paleontology are immense.  Note the ammonite motif in the streetlamps along the esplanade. 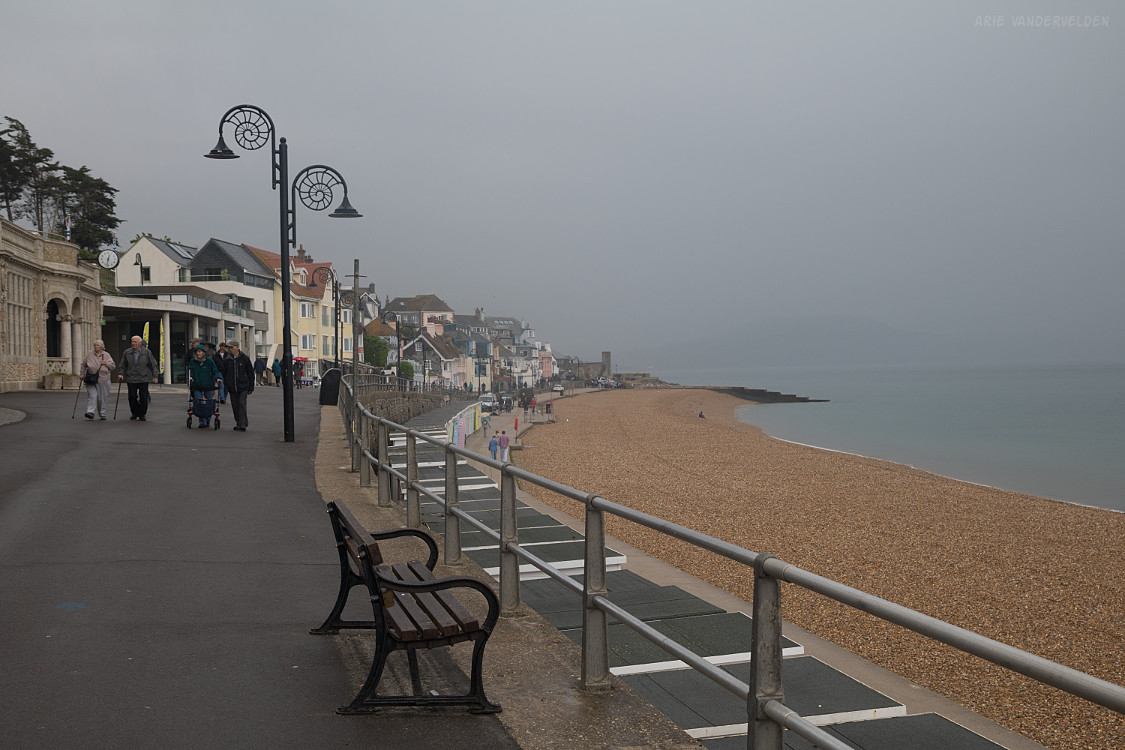 We stayed in Lyme Regis for two nights.  We had fun exploring the town on our day off.  At lunchtime we bought pasties (meat pies) from a local bakery, and at the local arcade Diana had her fortune read by Zoltar. 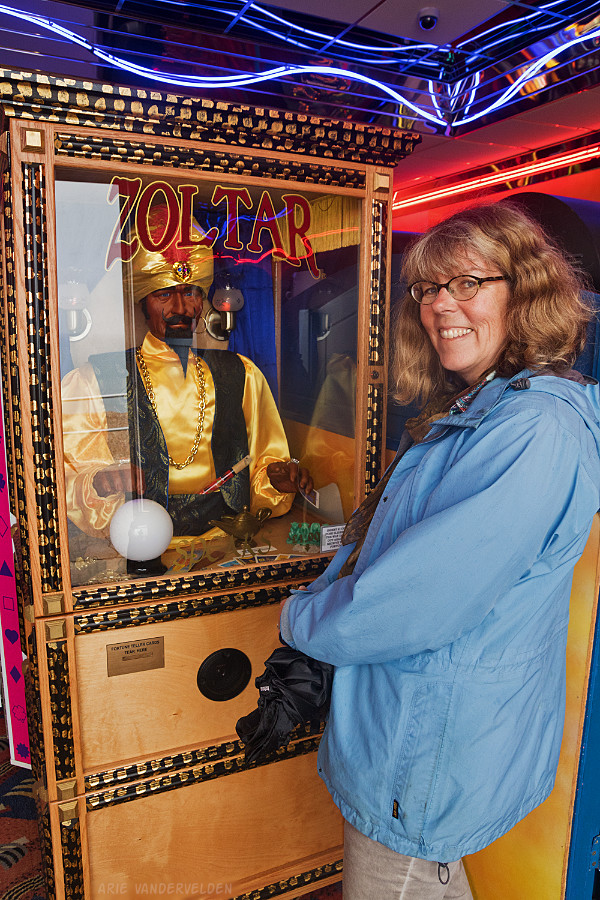 The breakwater protecting Lyme Regis’ harbor is called “The Cobb.”  Jane Austen visited Lyme Regis several times during her life, and she wrote about Lyme Regis and The Cobb in her books. 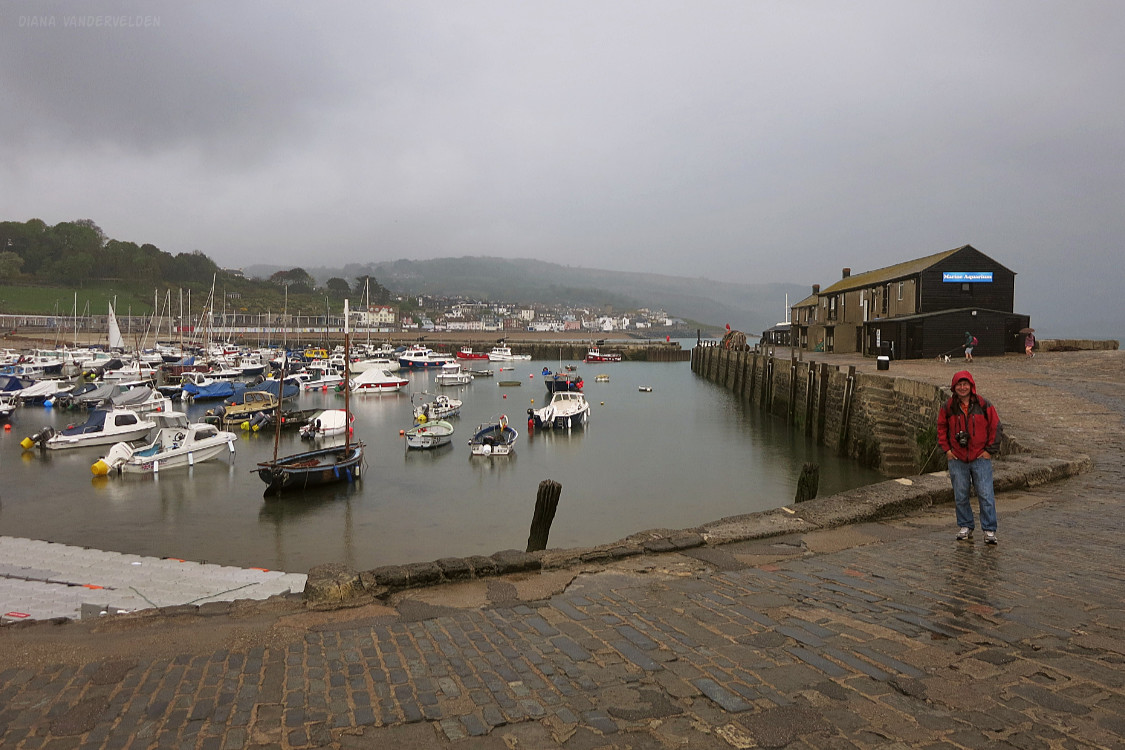 There is a small fishery at Lyme Regis, and we watched a fisherman land his catch of whelks and other seafood. 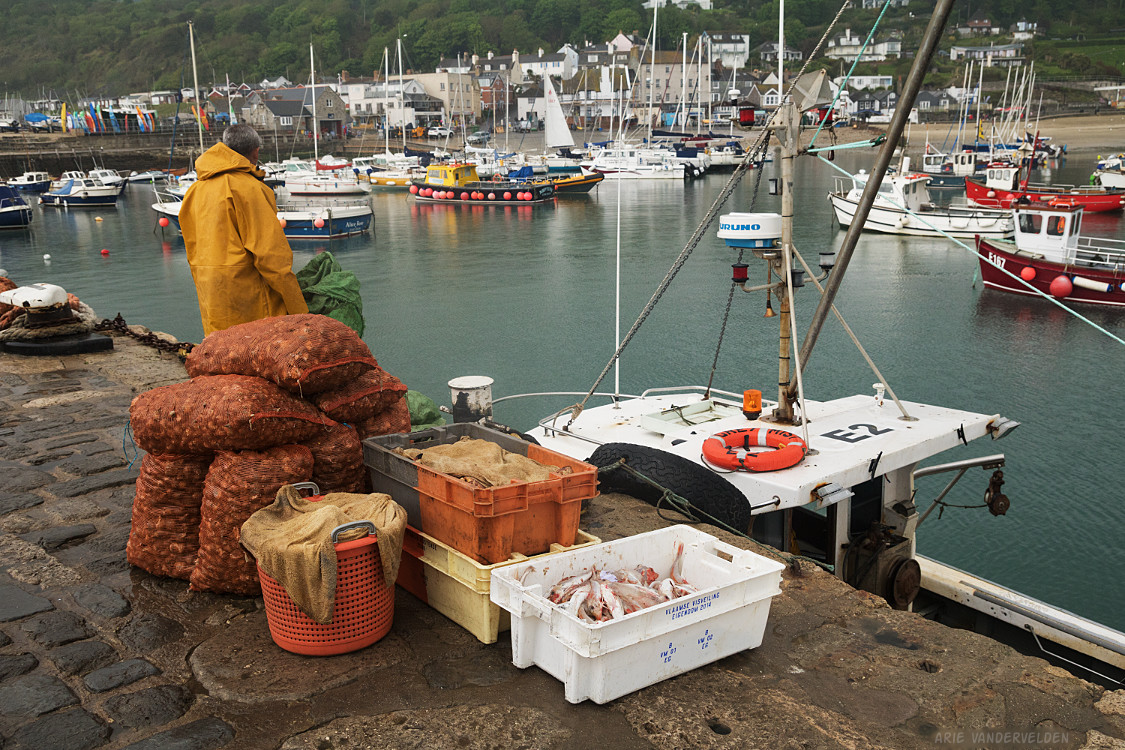 We started out hiking in a steady soaking rain.  The trail initially followed some busy roads that led to the town of Charmouth.  Beyond Charmouth there were some detours due to active landslips, but eventually we joined the coastal path.  It led through woodlands filled with bluebells.  It was foggy and drizzling, which made the scene quite magical. 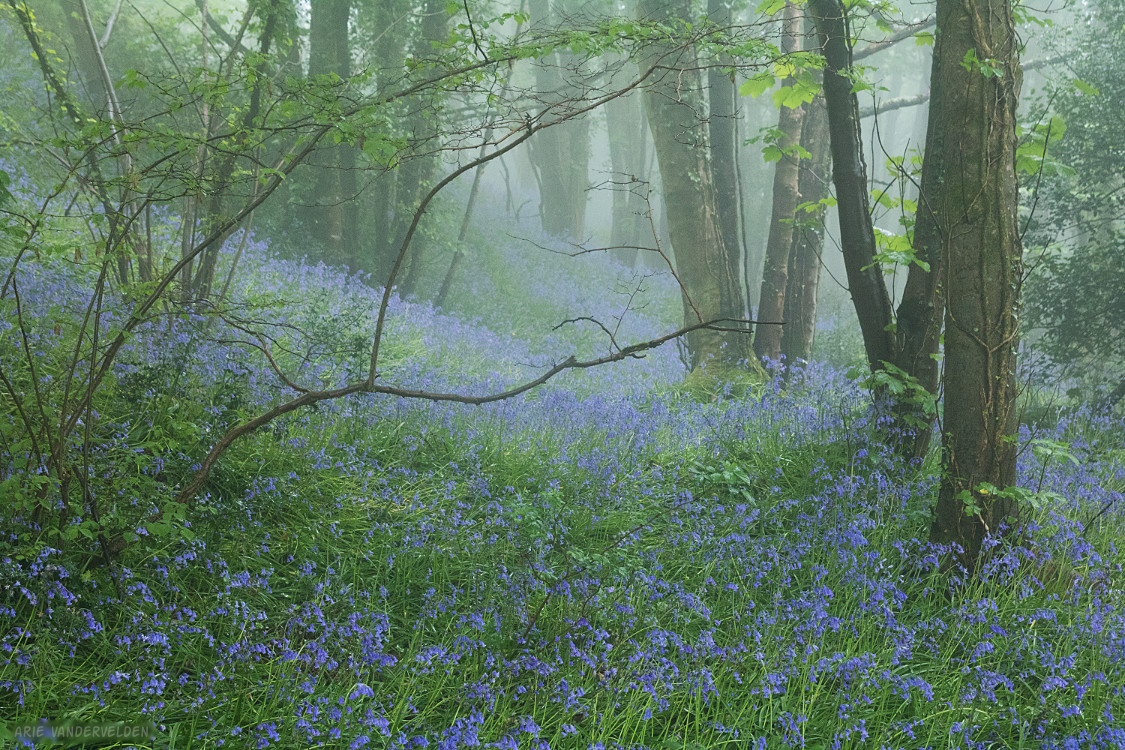 As we approached Golden Cap the clouds started to lift, and the landscape around us revealed itself.  We were quickly shedding layers of clothing.  Golden Cap is the tallest hill along this section of the coastal path. 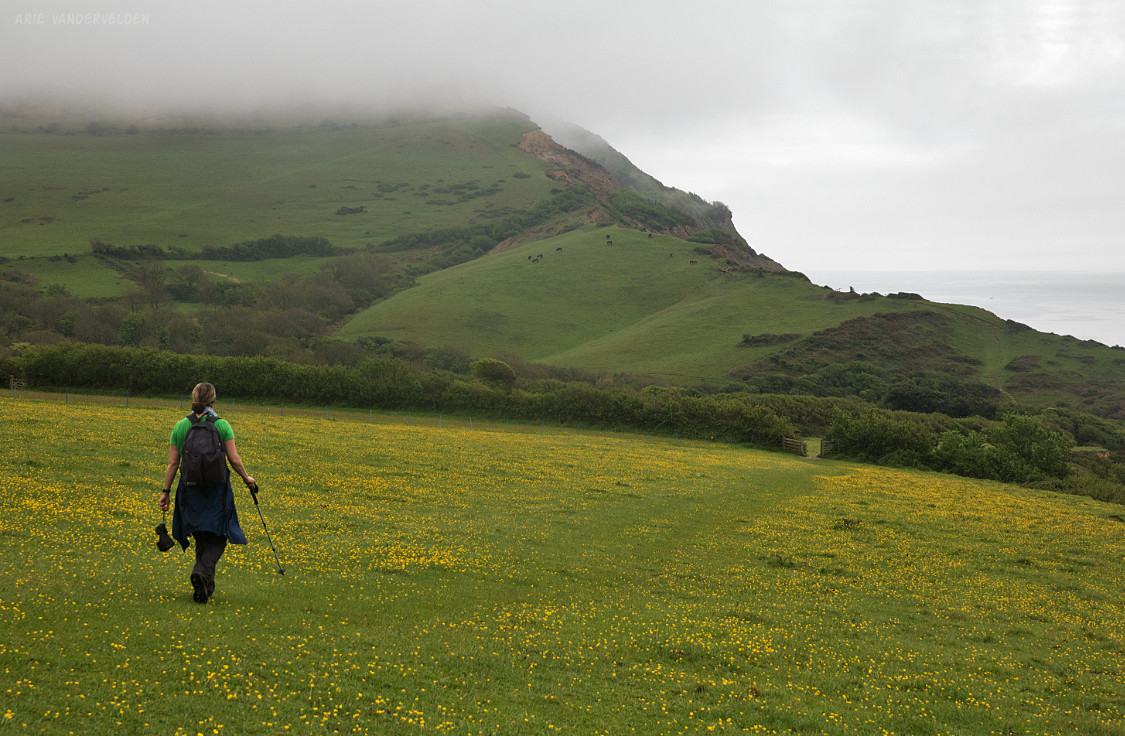 Near the top we got a good view back towards Charmouth and Lyme Regis. 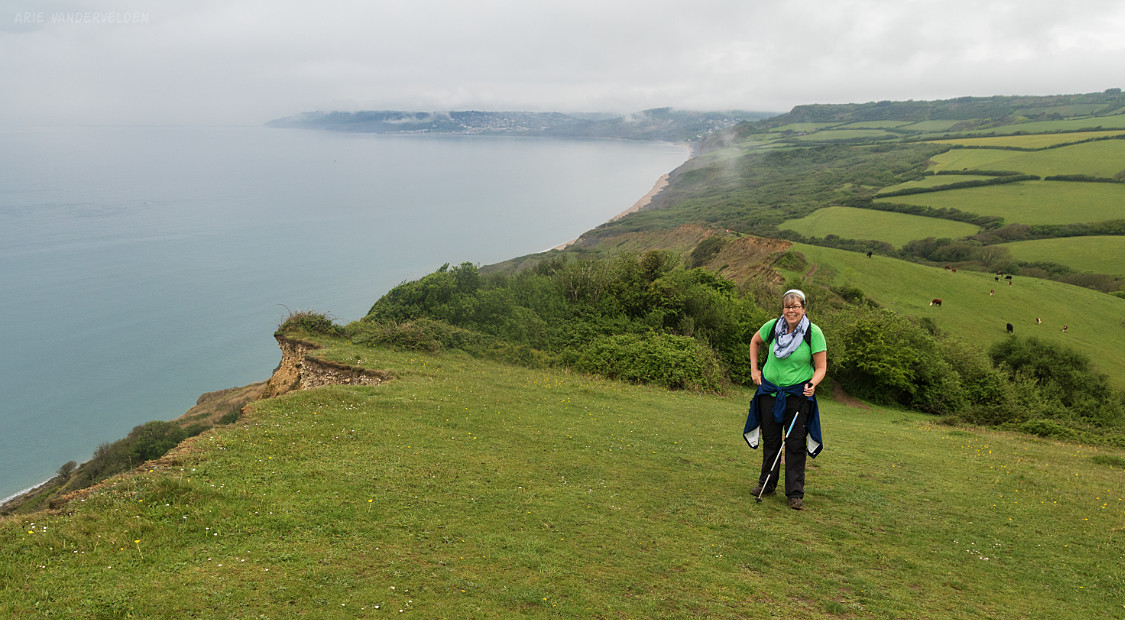 I took some pictures looking east, towards Seatown. 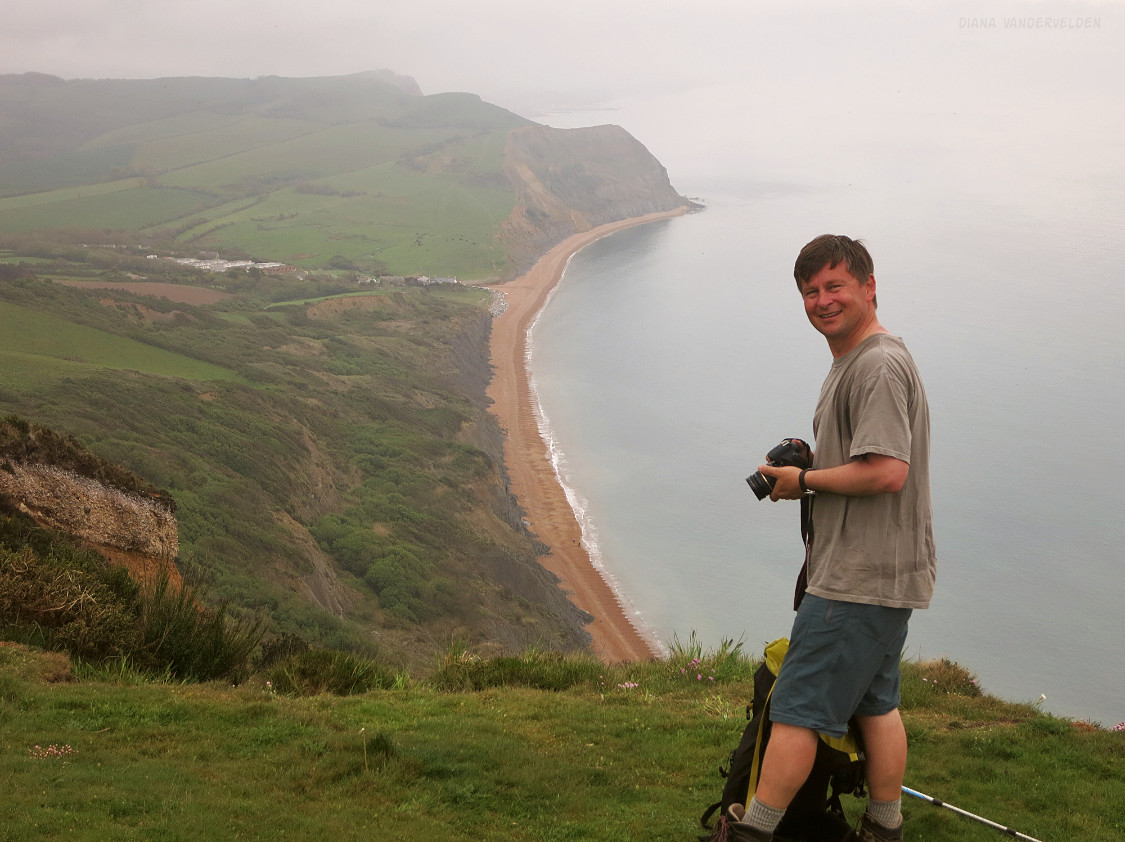 We walked on the beach at Seatown and stopped for a snack.  The light was very moody. 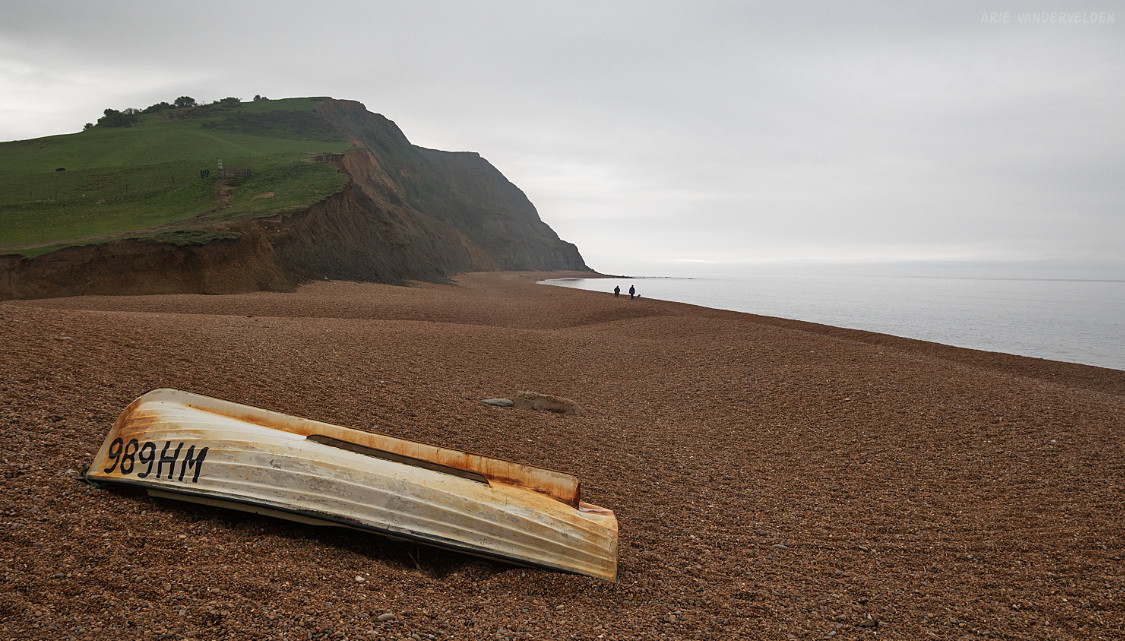 Across the next hill the fog rolled in.  I tried to navigate the best I could, but at one point I did get somewhat confused about which way to go.

Just as as thought we were lost, some other hikers appeared out of the fog.  They recommended a cream tea at a farm just down the way.  It sounded like a good idea so we hiked in the direction they pointed, and found the farmhouse. 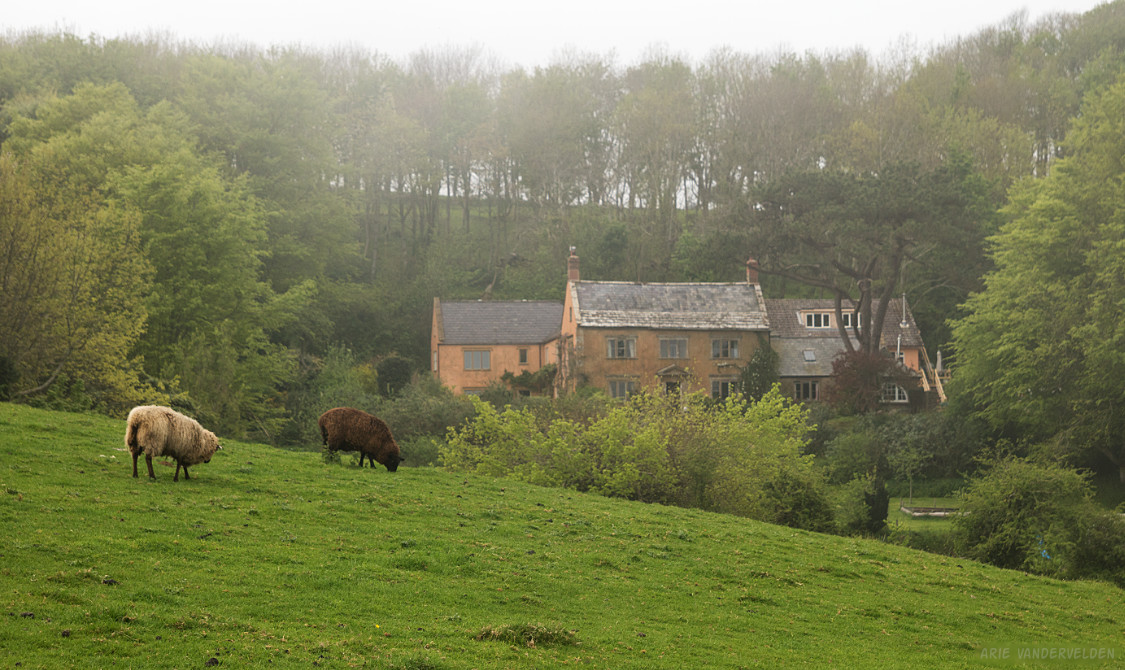 Homemade scones, homemade clotted cream, homemade preserves…. yum. We lingered for a while, and then hiked the last little bit to our destination: West Bay. 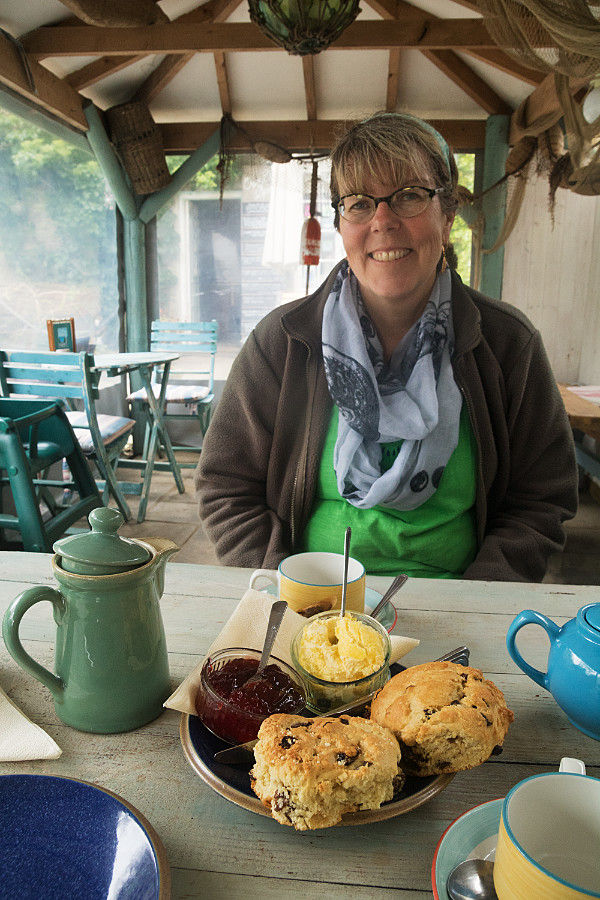 Continue to part 3 of our hike.