After spending several days hiking in spectacular Petra, our next stop in Jordan was Wadi Rum.  Wadi Rum is a desert area made famous by renegade British soldier T.E. Lawrence.  Parts of the 1962 epic movie ‘Lawrence of Arabia‘ with Peter O’Toole were filmed here.

We drove to Wadi Rum village, a scruffy and dusty little town that’s the staging area for trips into the desert.  We had booked a one-day-one-night itinerary with Rum Stars, a local outfitter.  We met Abdul, our Bedouin guide, and after some formalities he directed us and and two American tourists into the back of his pickup truck.  We drove off into the desert.

It was a full-day itinerary with numerous stops along the way.  For our first stop we scrambled up a boulder slope to a water seep, where supposedly T.E. Lawrence once stopped to fill his canteen.

The location of T.E. Lawrence’s spring has some geological significance to it.  The lower slopes are made of Precambrian granite, and the granite is uncomformably overlain by Cambrian sandstone.  From a distance, the Precambrian granite looks pinkish-grey and weathers into a moderate slope.  The overlying sandstones form steep cliffs and look yellowish-red.  T.E. Lawrence’s spring occurs right at the unconformity.  The sandstones are more porous and permeable than the underlying granites, and as such any water is blocked from going deeper (aquiclude) and flows out to the cliff edge.  The spring can be seen as a line of green bushes along the cliffs. 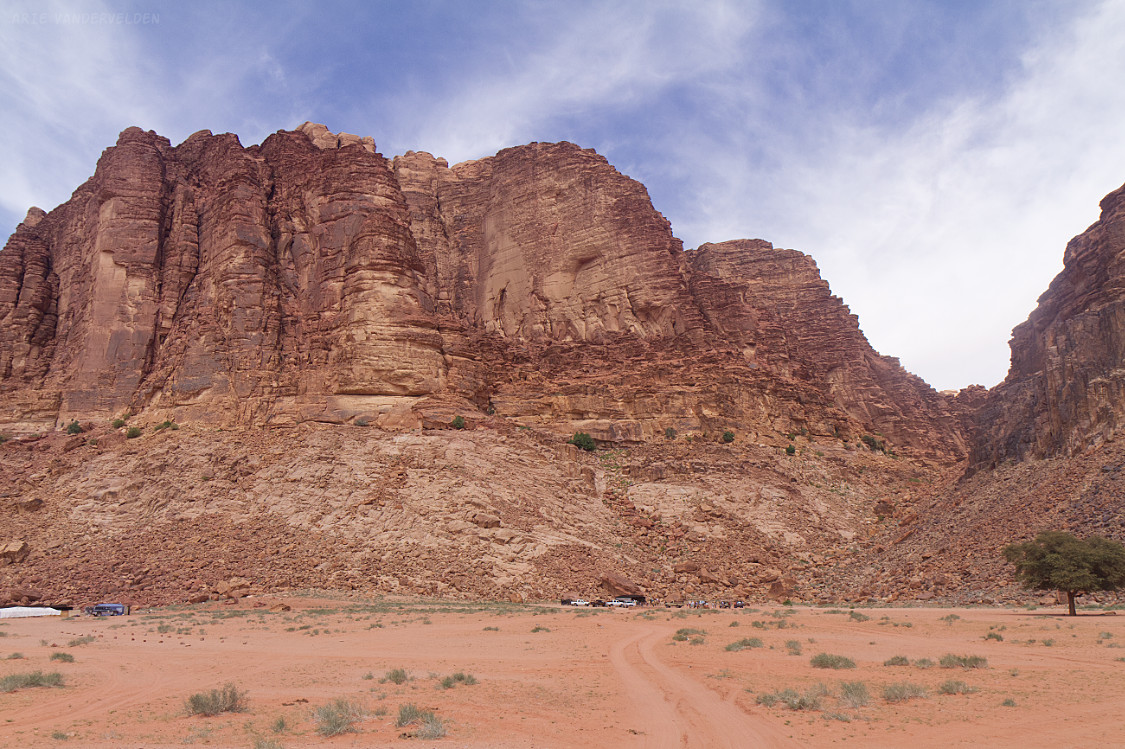 The following picture shows a close-up of the cliff.  The spring is right at the unconformity.  Note that blocks of reddish sandstone have tumbled down the upper cliffs and now form a pile of rubble on top of the granite.  The difference between the dark-red sandstone rubble and the underlying pale-grey granite is clearly visible.  T.E. Lawrence’s spring is at the bush in the center of the picture.

We climbed up to the water seep and sat on the Great Unconformity. 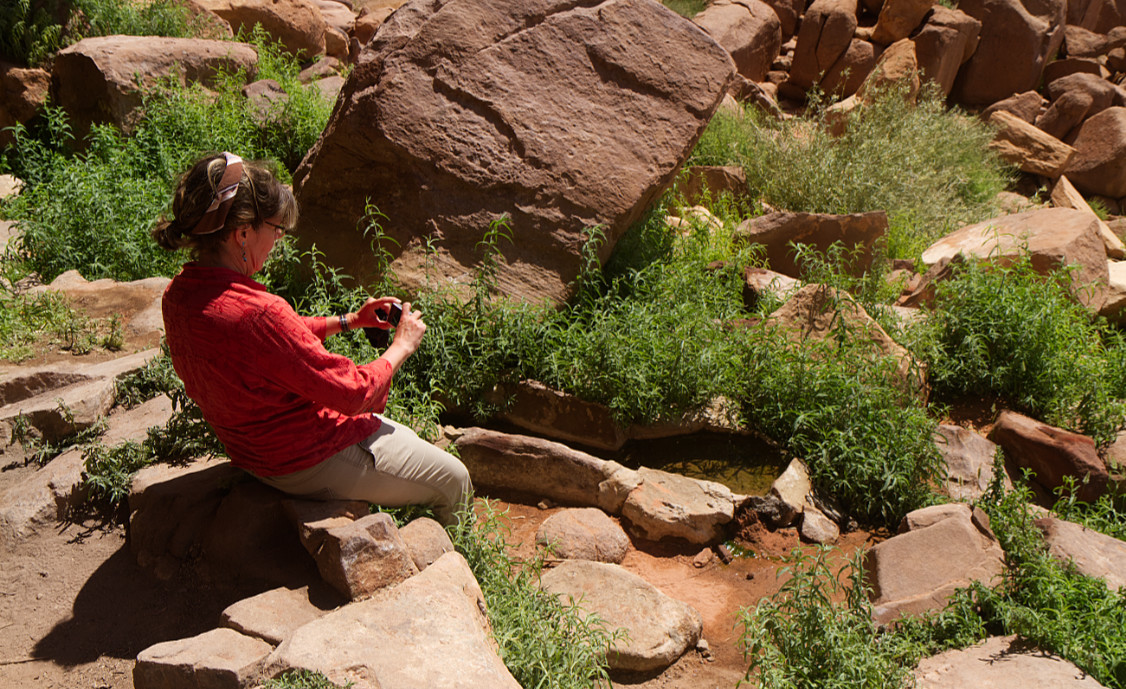 From the water seep there was a nice view of the valley.  Some people were just arriving by camel. 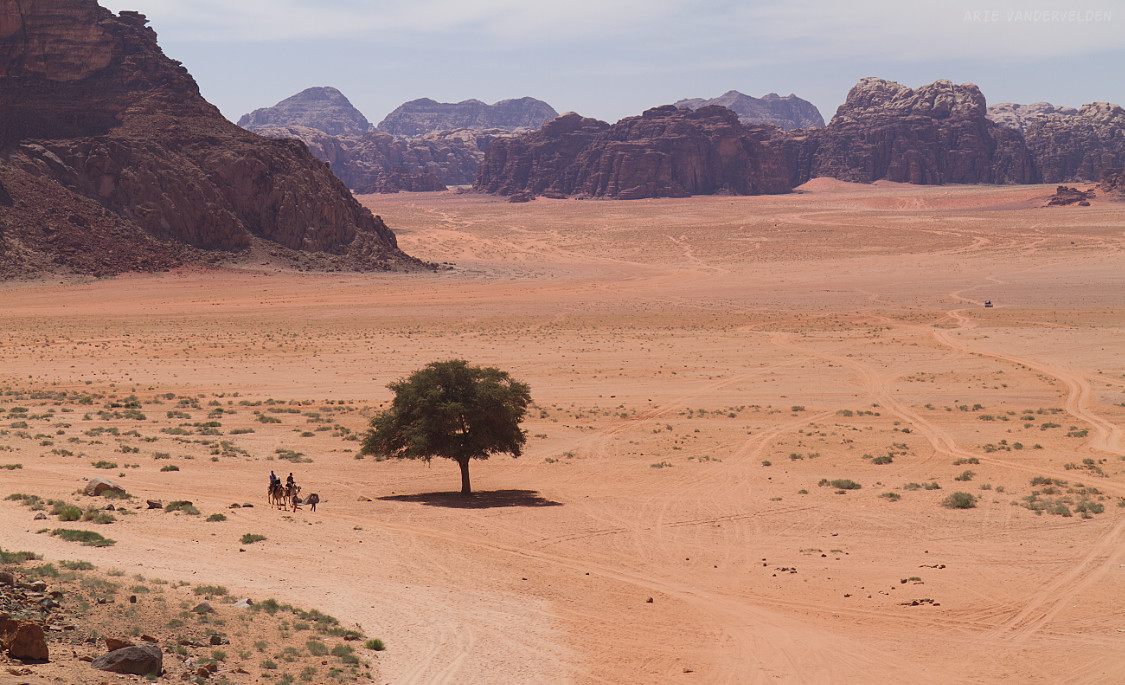 If the scenery at Petra somewhat resembles Arches national park in Utah, then Wadi Rum has some resemblance to Monument Valley.  At Wadi Rum, sandstone mountains rise up out of the sandy desert plain.  Each of the massifs is many kilometers long, and they are separated by kilometer-wide stretches of desert with very little vegetation.  Within the ranges are some narrower canyons.  Some dead-end while others slice right through the mountain ranges. 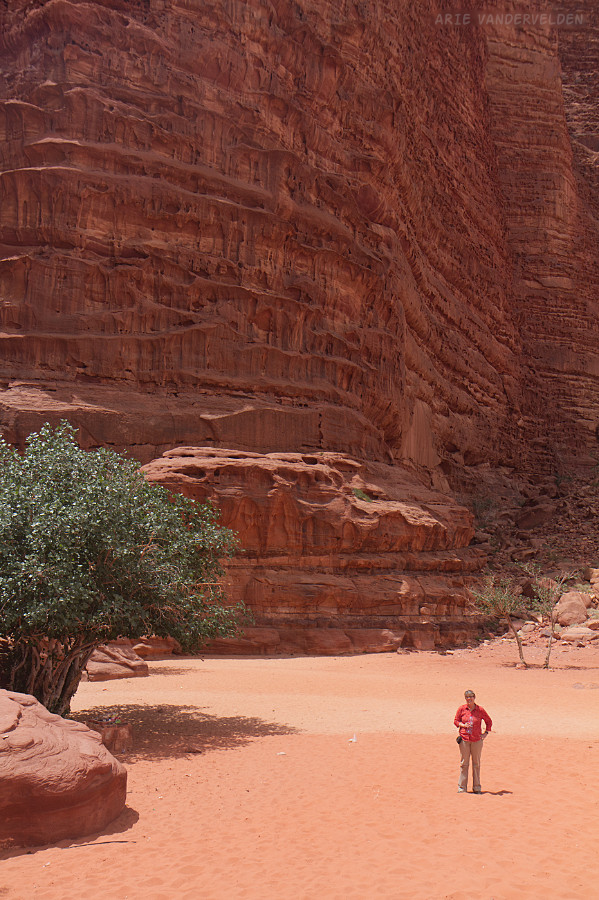 As in the American desert, the locals over the ages have left petroglyphs.  The ones at Wadi Rum feature camels rather than horses. 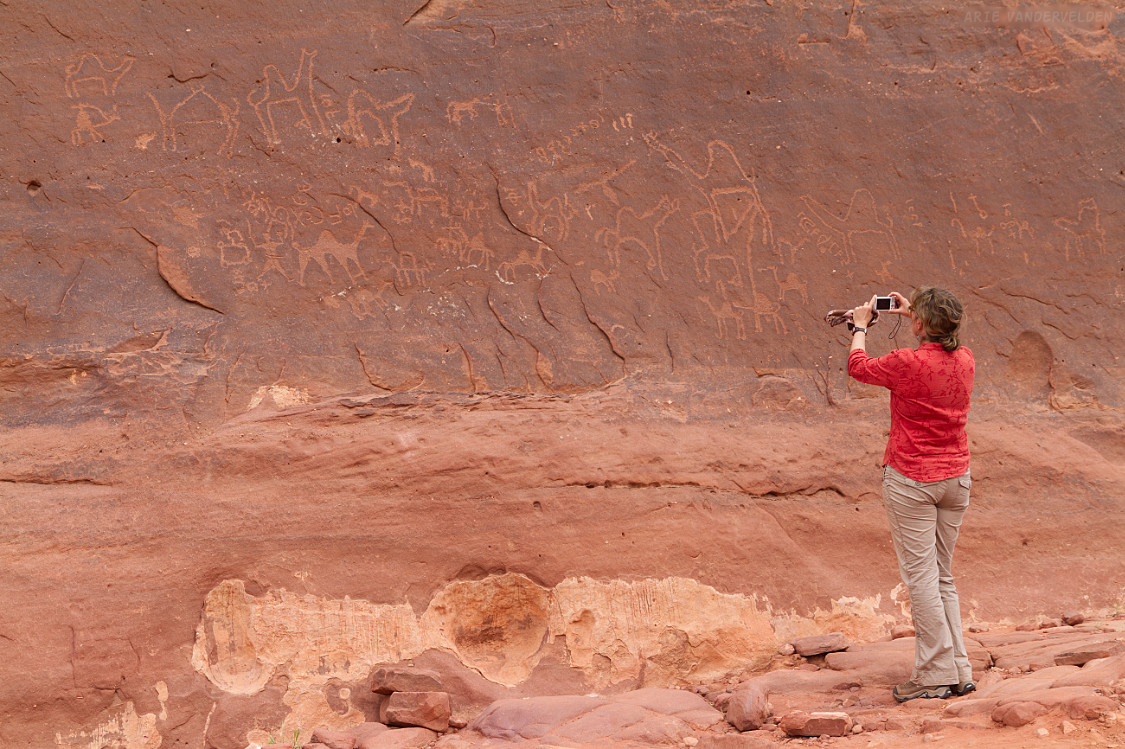 Other than pickup trucks, camels are still a popular means of transport. 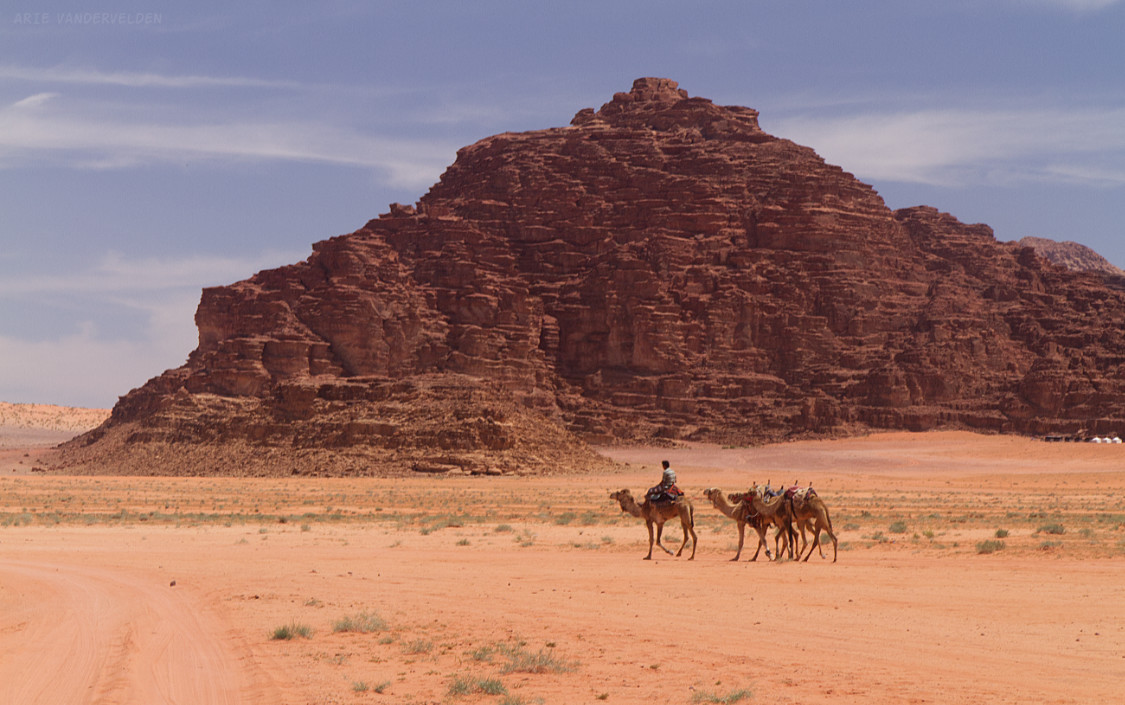 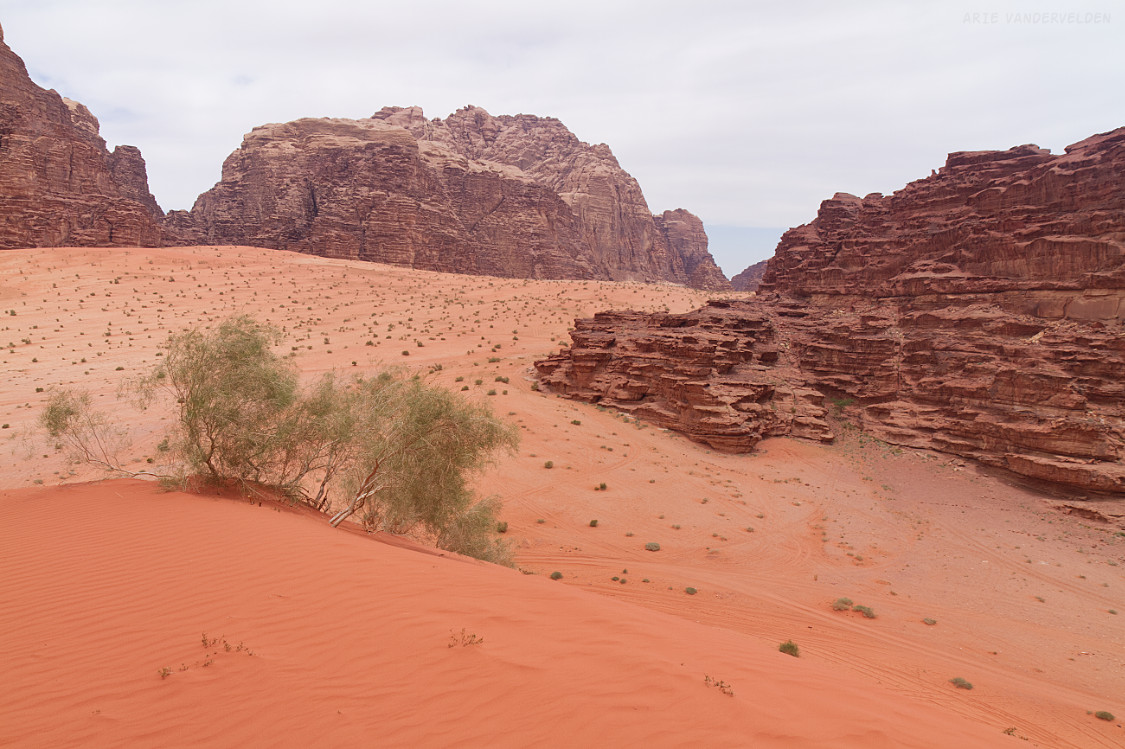 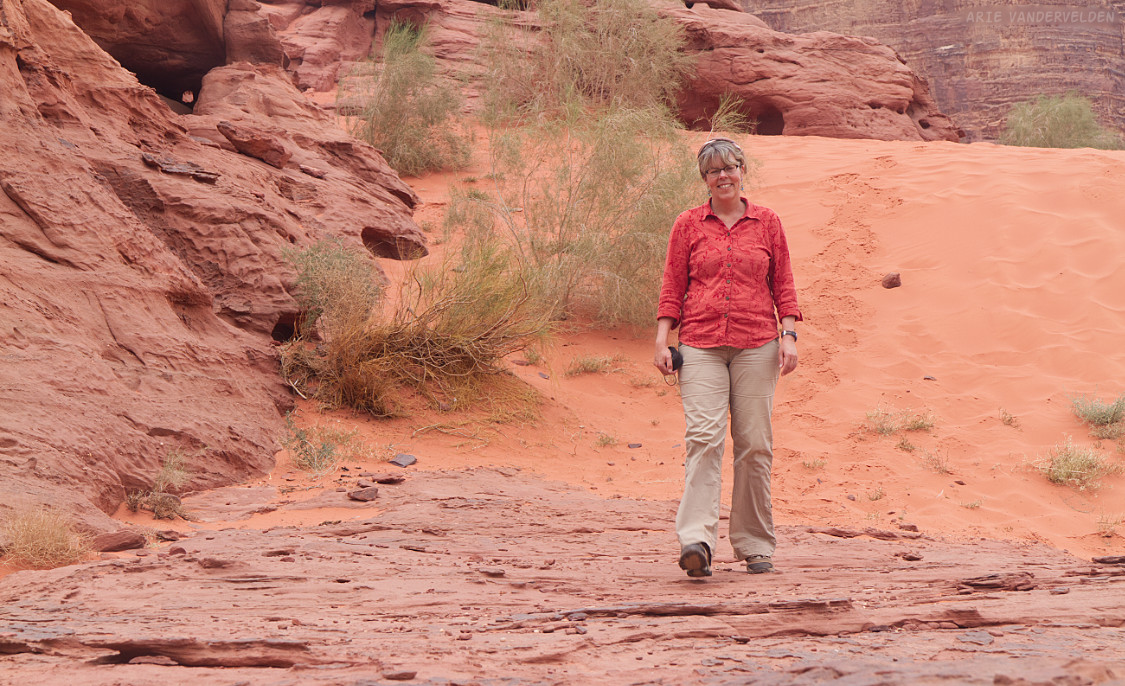 In a side canyon we stopped for lunch. 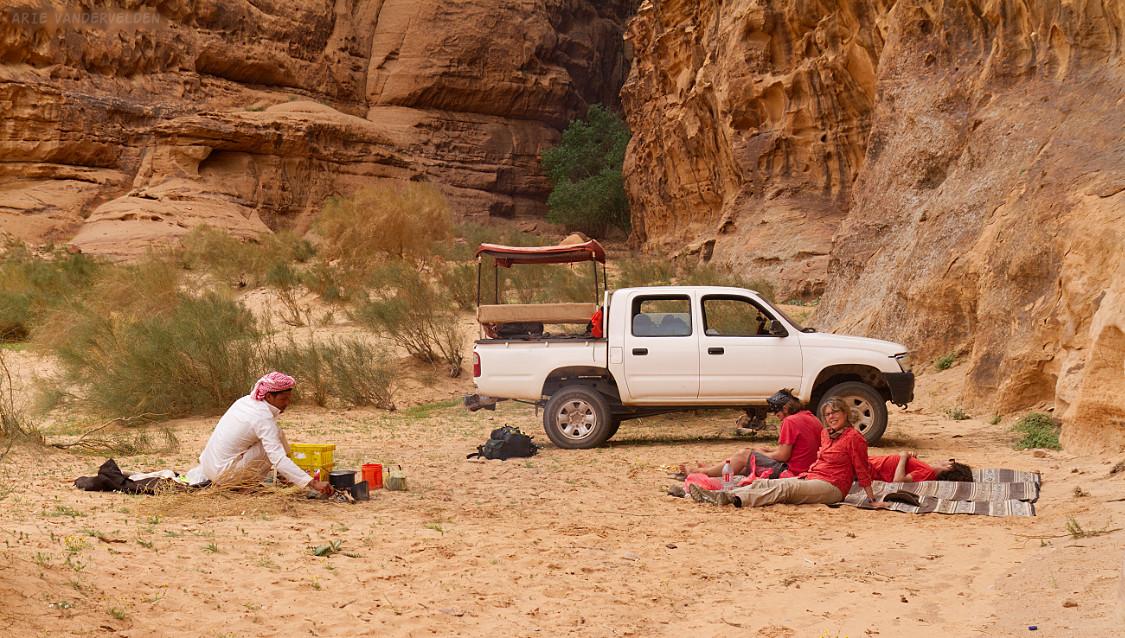 Abdul built a fire, brewed a pot of tea, and cooked up a stew. 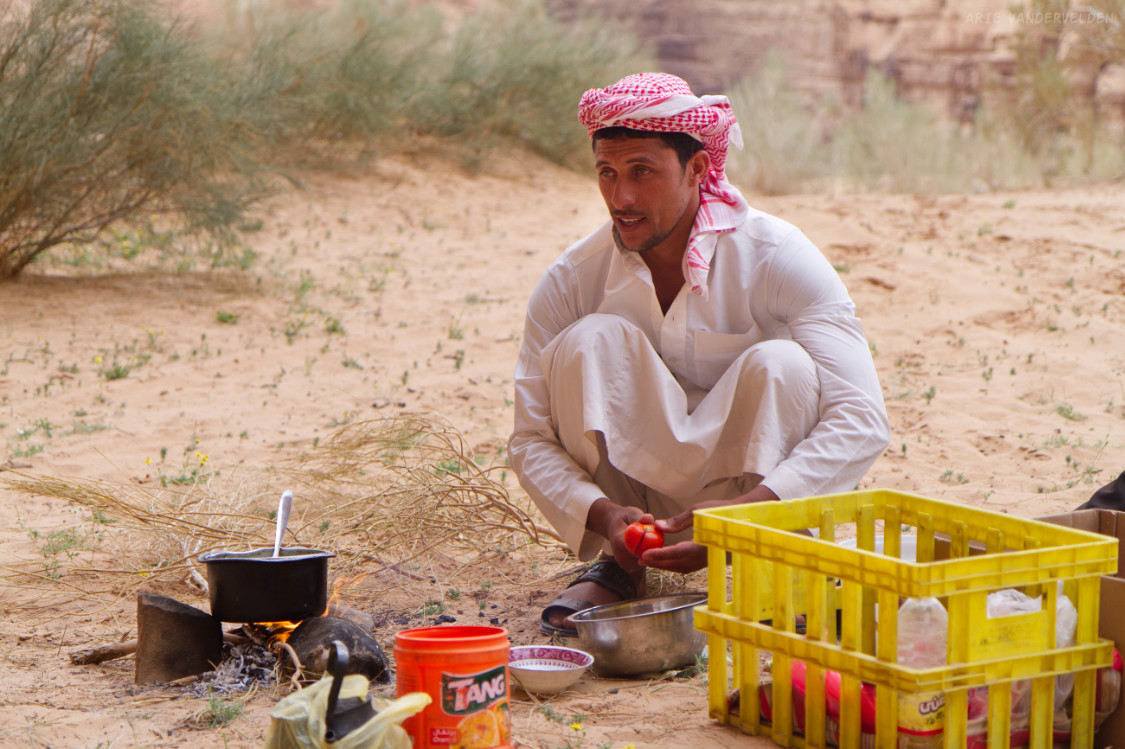 After lunch we relaxed for a while before continuing on. 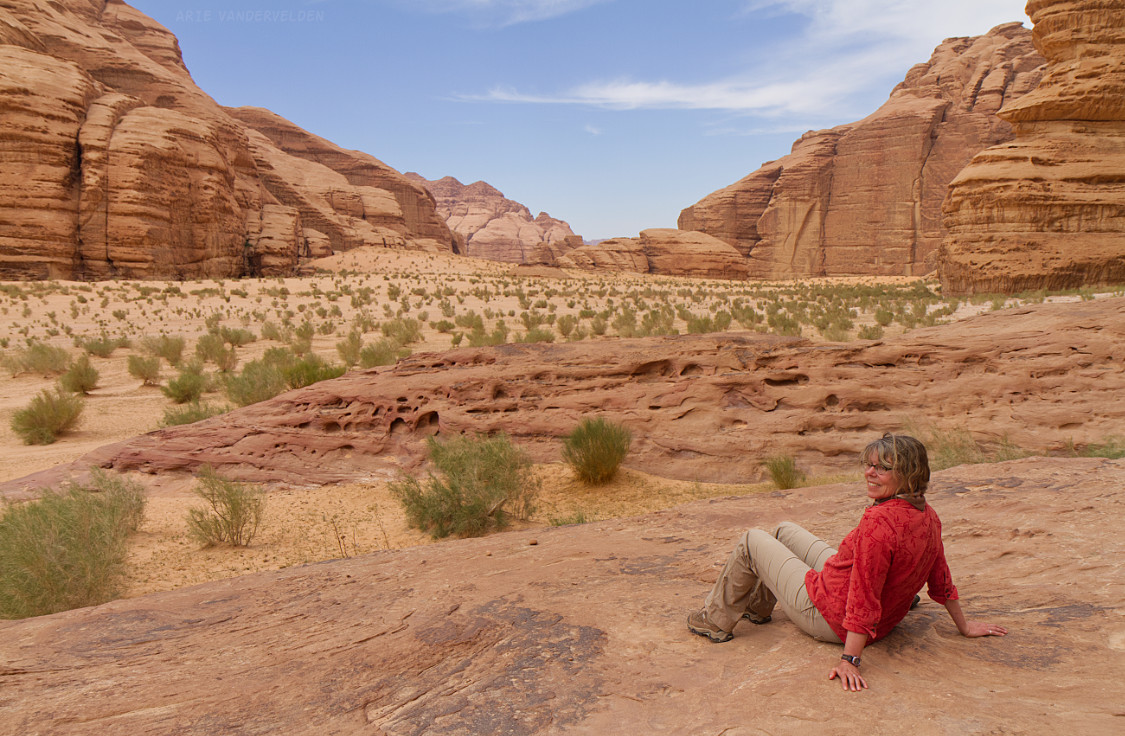 After lunch we jumped into the back of the pickup truck, and Abdul drove us around.  The scenery was great. 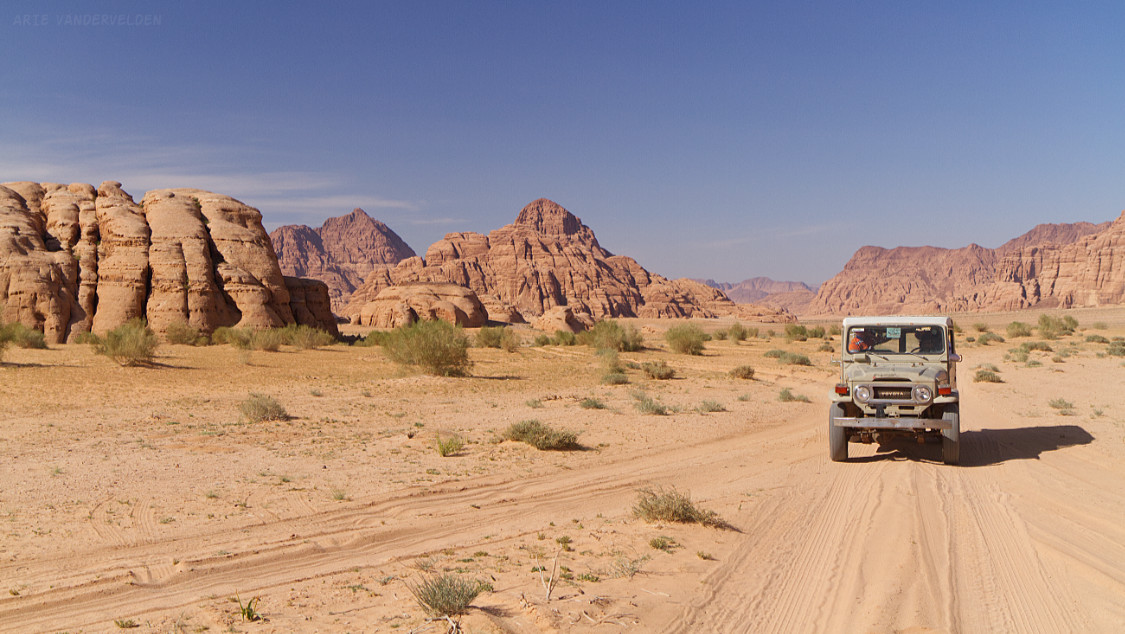 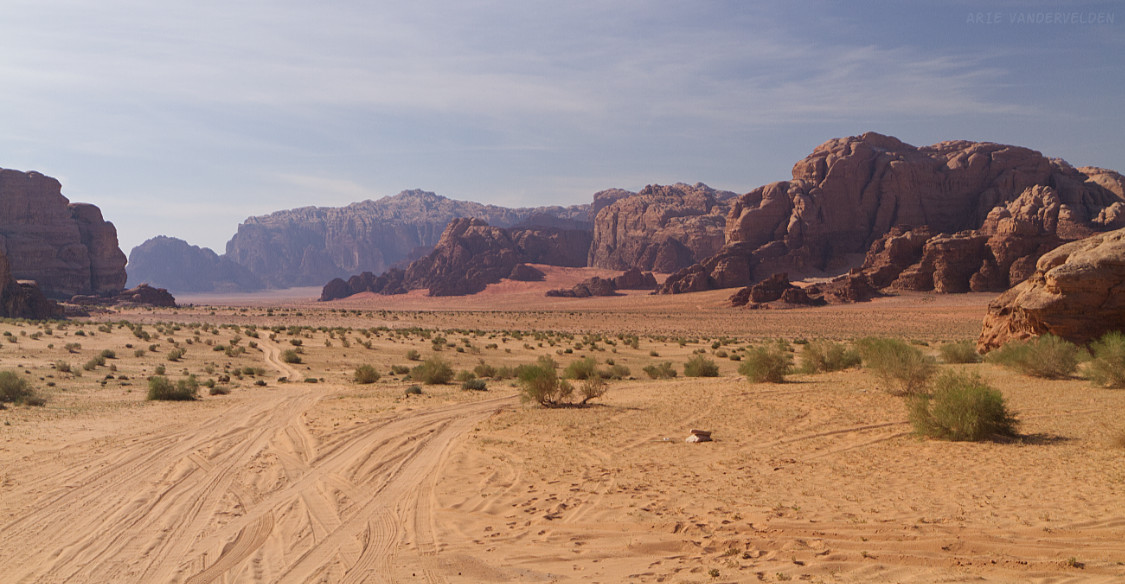 Earlier on in the day it had been overcast, but now the clouds were starting to part.  I put a polarizing filter on my lens to darken the sky. 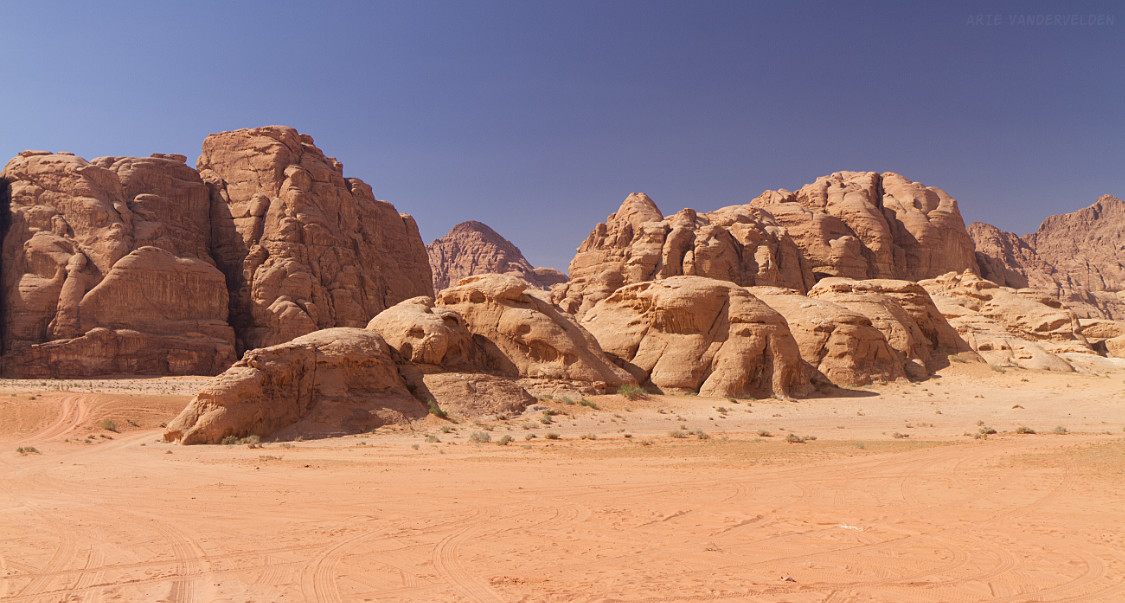 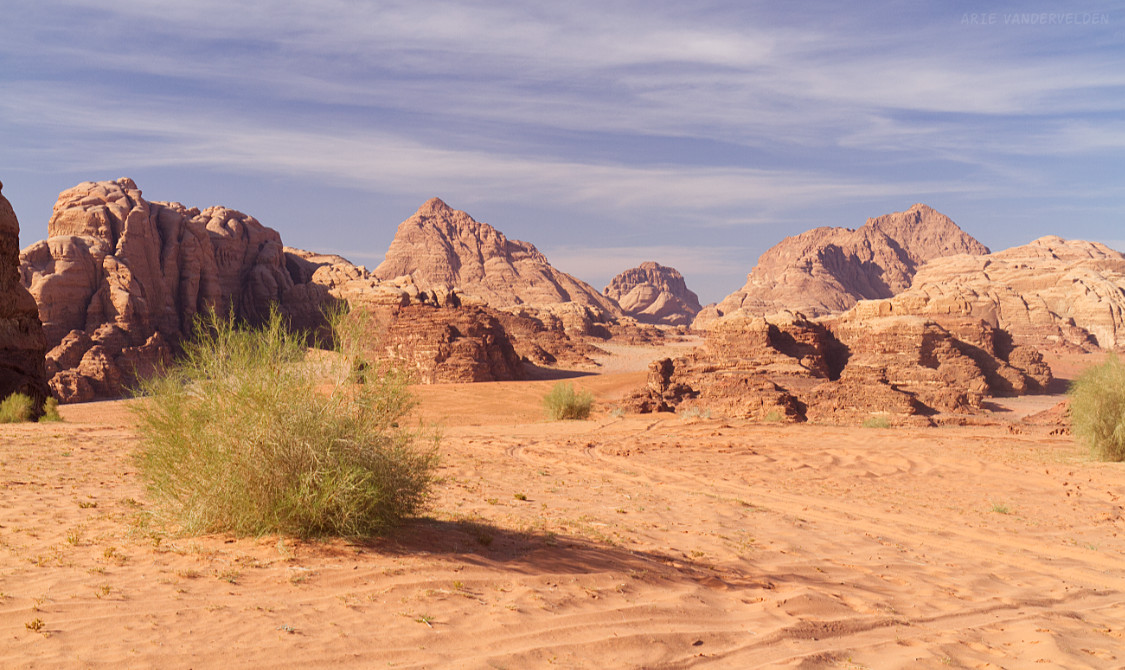 Go to part 2 of our Wadi Rum excursion.

We had pre-booked our tour with Rum Stars before coming to Jordan.  We booked through their website.  We had an awesome time and highly recommend them.

There are a lot of outfitters in Wadi Rum.  Some tourists just show up in Wadi Rum village and choose an outfitter.  There are touts along the road who will lead you to their outfitter of choice.

The village of Wadi Rum can be reached by car.  We left our car for the night in the compound of the outfitter.  We each packed a small overnight bag to take along, leaving extra stuff in the car.  All you really need is a water bottle, a sunhat, sunscreen, some clothes for the evening, a toothbrush, and a camera.

I recently read ‘Lawrence in Arabia‘, a book by investigative journalist Scott Anderson.  It follows the exploits of T.E. Lawrence, as well as those of German spy Kurt Prufer, Jewish agronomist-spy Aaron Aaronsohn, and American oilman William Yale.  The book chronicles the fall of the Ottoman Empire and the events of World War One in the Middle East.  It’s not a light read, but it is an exceedingly well-written and meticulously researched book on a fascinating subject.  I thoroughly enjoyed reading it.