Read part 1 of our Petra hike, where we explore the Siq, the Treasury, and we hike to Wadi Al Farasa.

We came back the next day and continued exploring the central area of Petra. 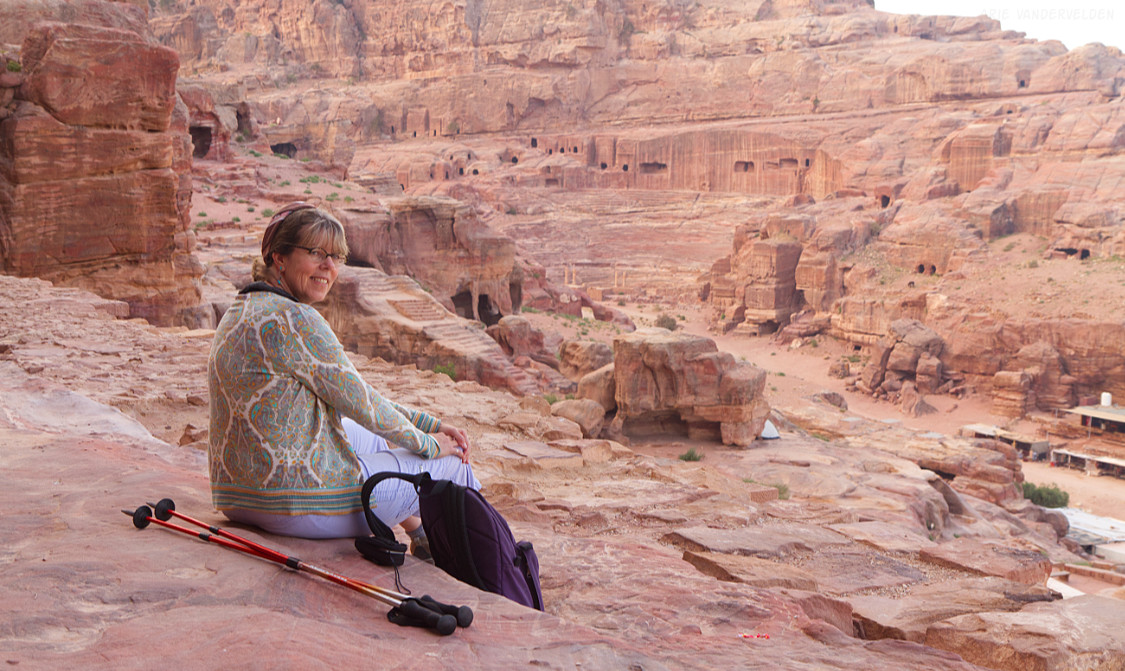 The weather had improved.  During our fist day of hiking the skies had been grey, it was spitting rain a bit, and it was windy at times.  On our second day we were treated to partially blue skies.  In the next photo, Diana looks at some of the Roman ruins in Petra. 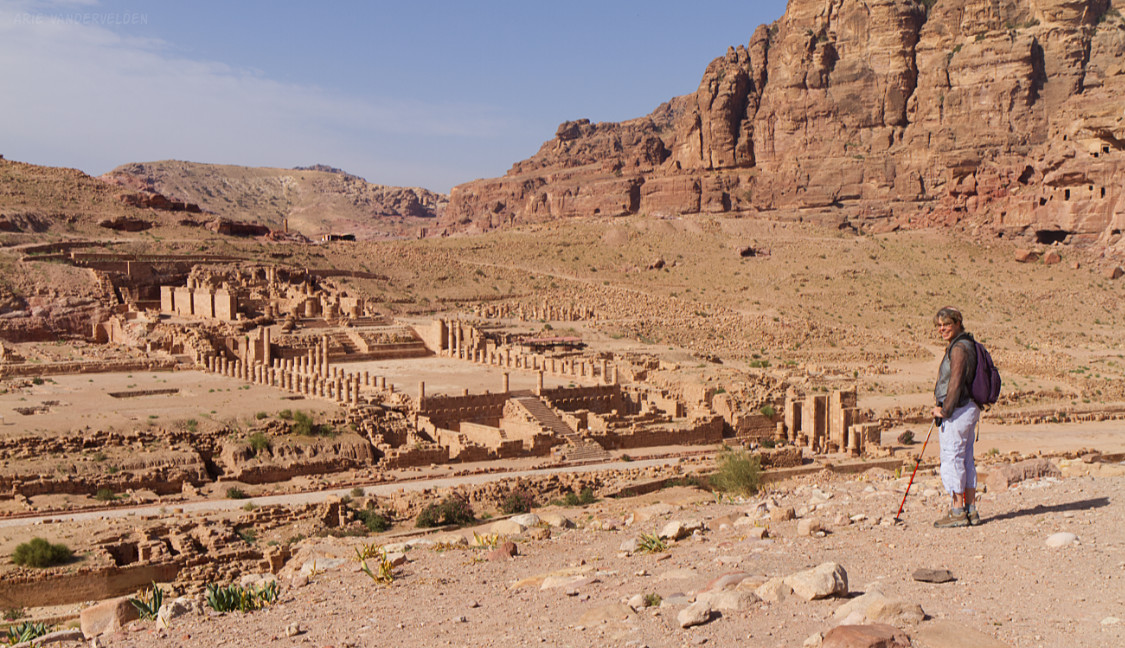 In the central area of Petra there are the remains of an early Byzantine-aged church.  The church has lavish floor mosaics.  One mosaic depicts a camel with cargo, helping visitors imagine the camel caravans that used to pass though. 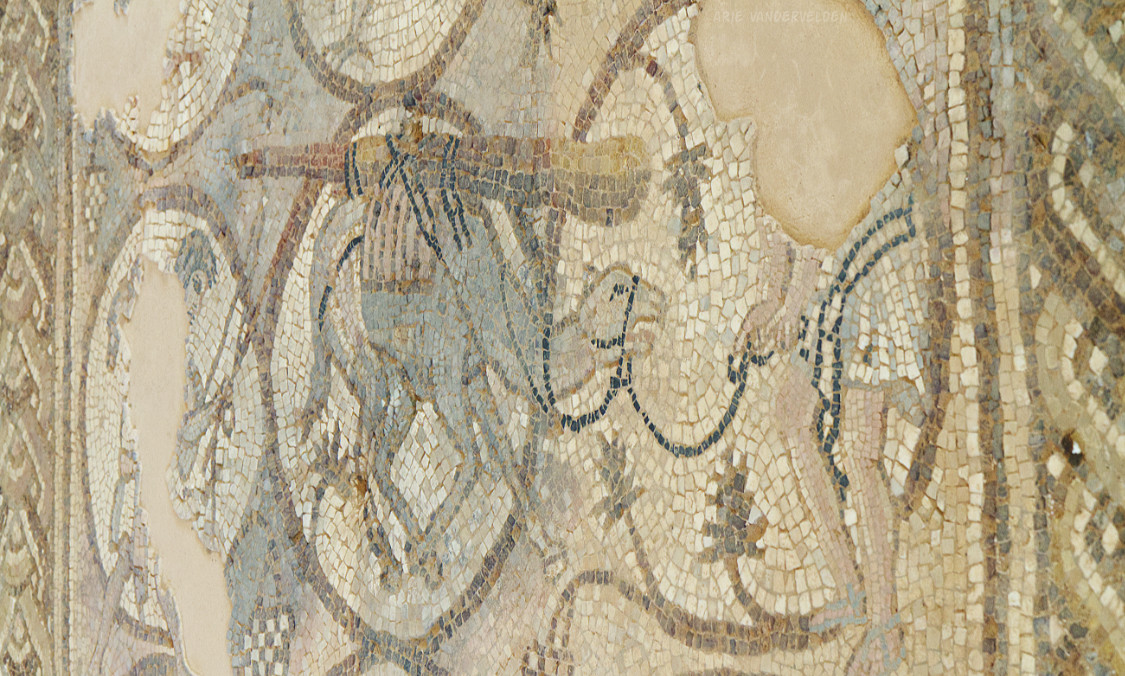 Flanking central Petra is a big rockwall with many elaborate tombs. 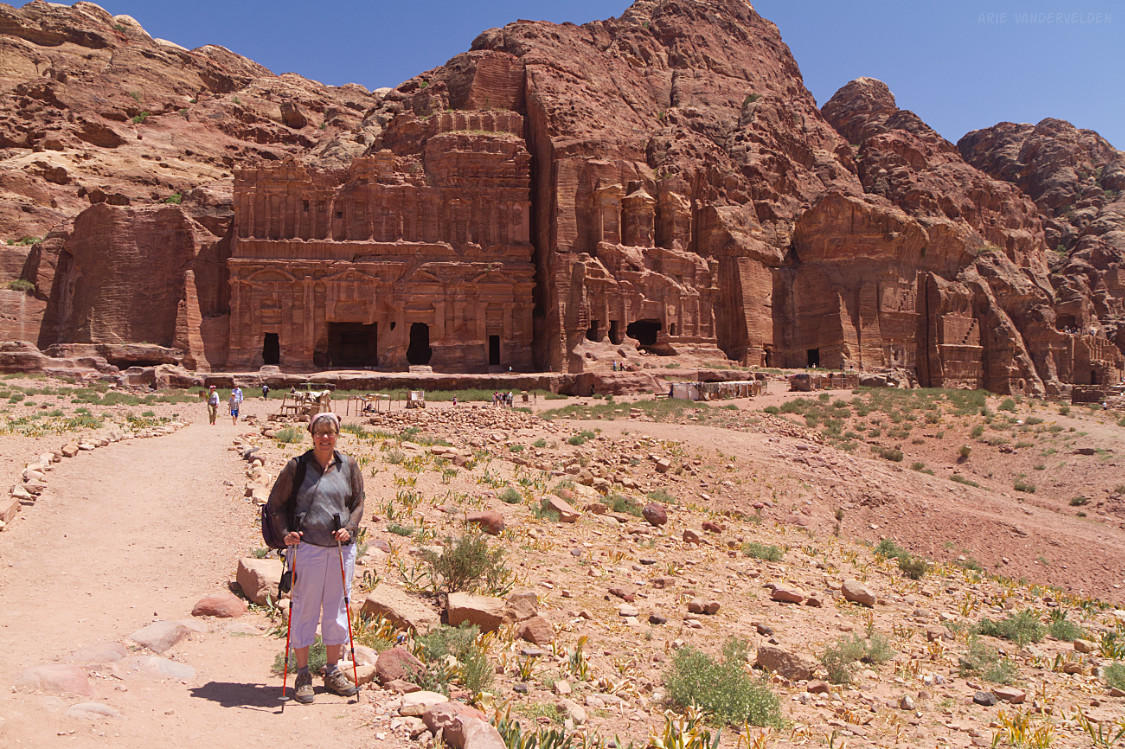 There is a smaller one named Silk Tomb, which was built in some very pretty sandstone. 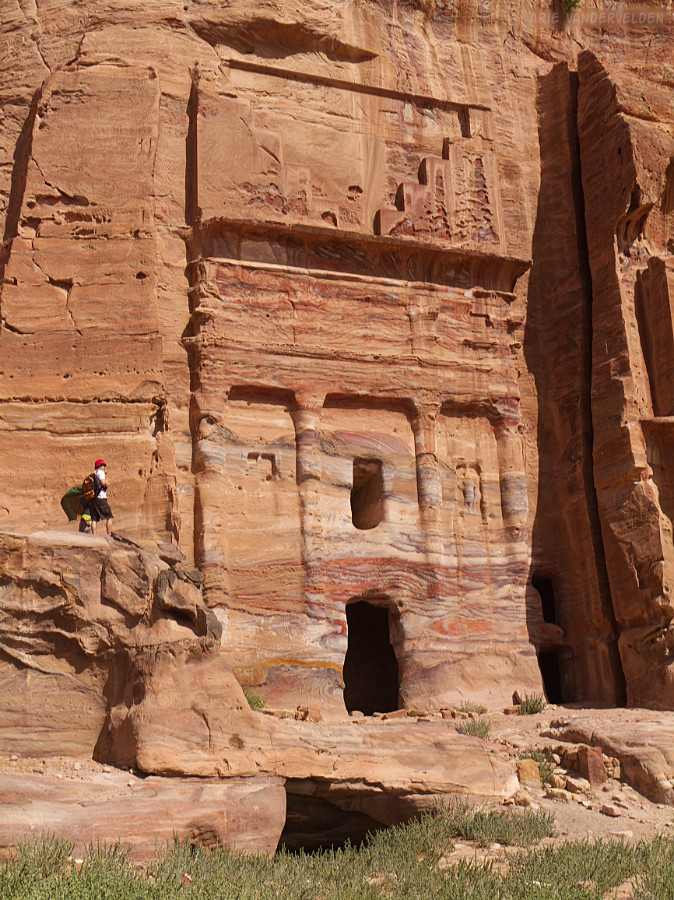 Behind this rockwall is a gap where a trail leads upwards.  This is the Al-Khubtha trail. 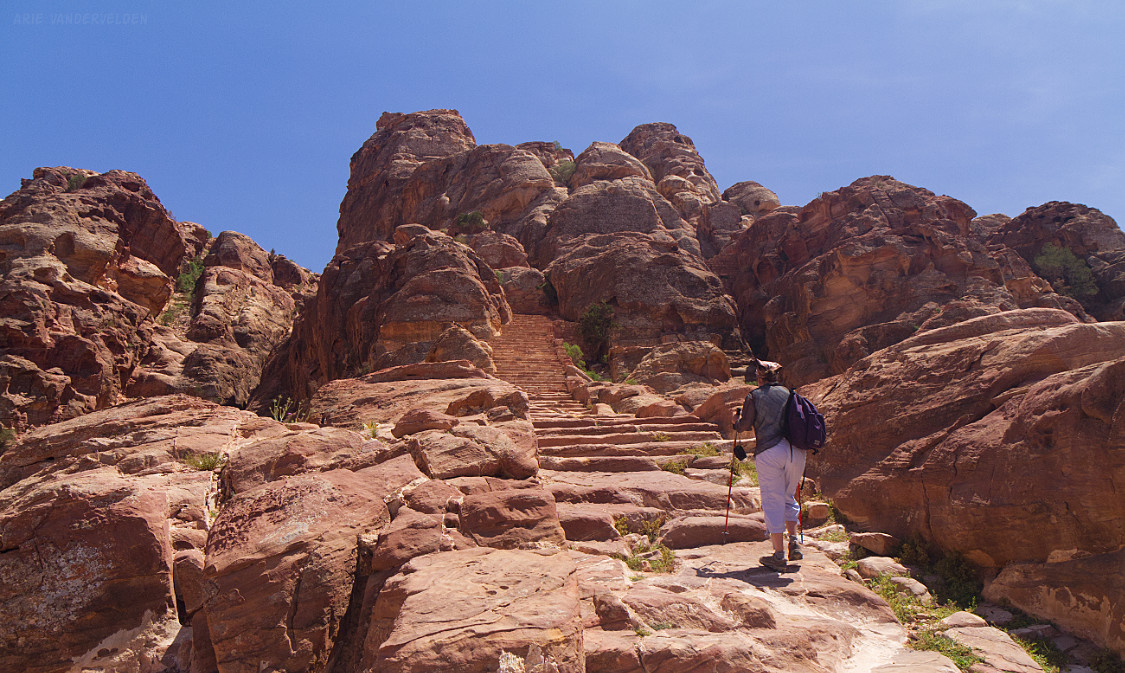 The trail goes straight up, but it’s wide and the steps really help. 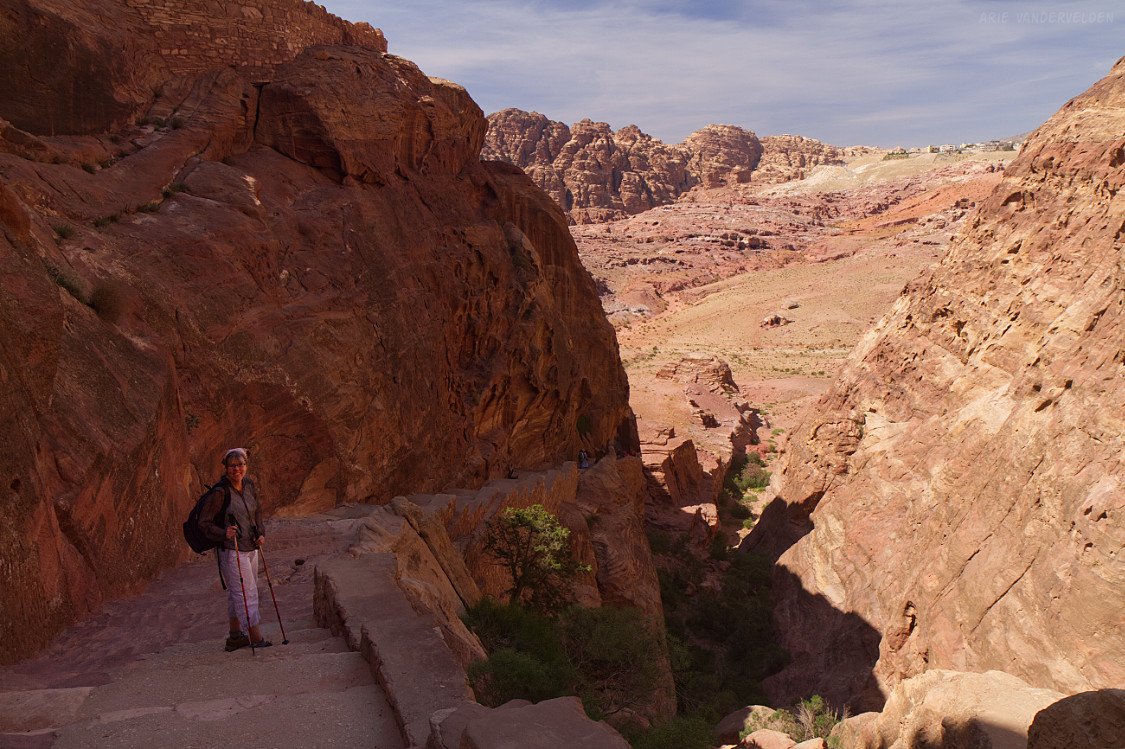 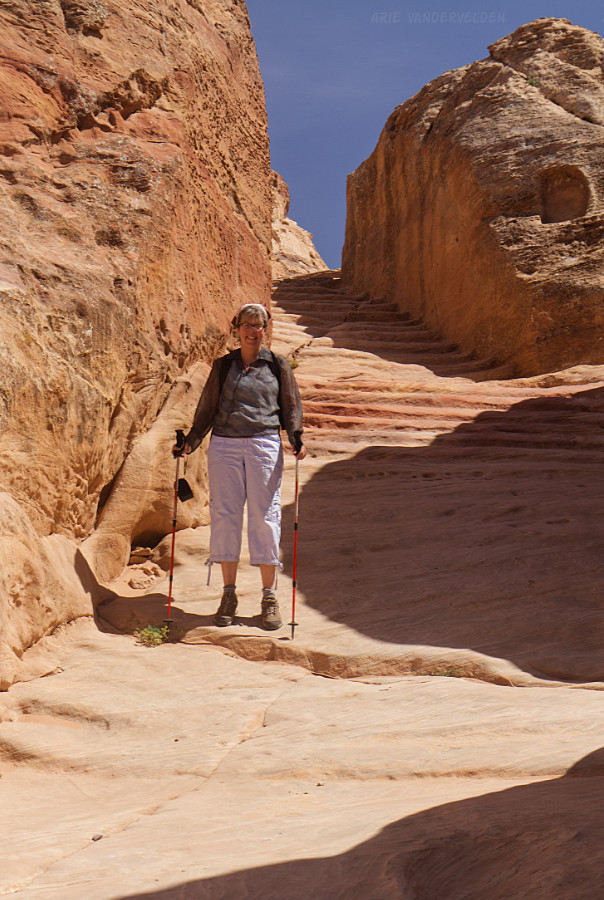 Eventually the trail levels off into a pretty desert. 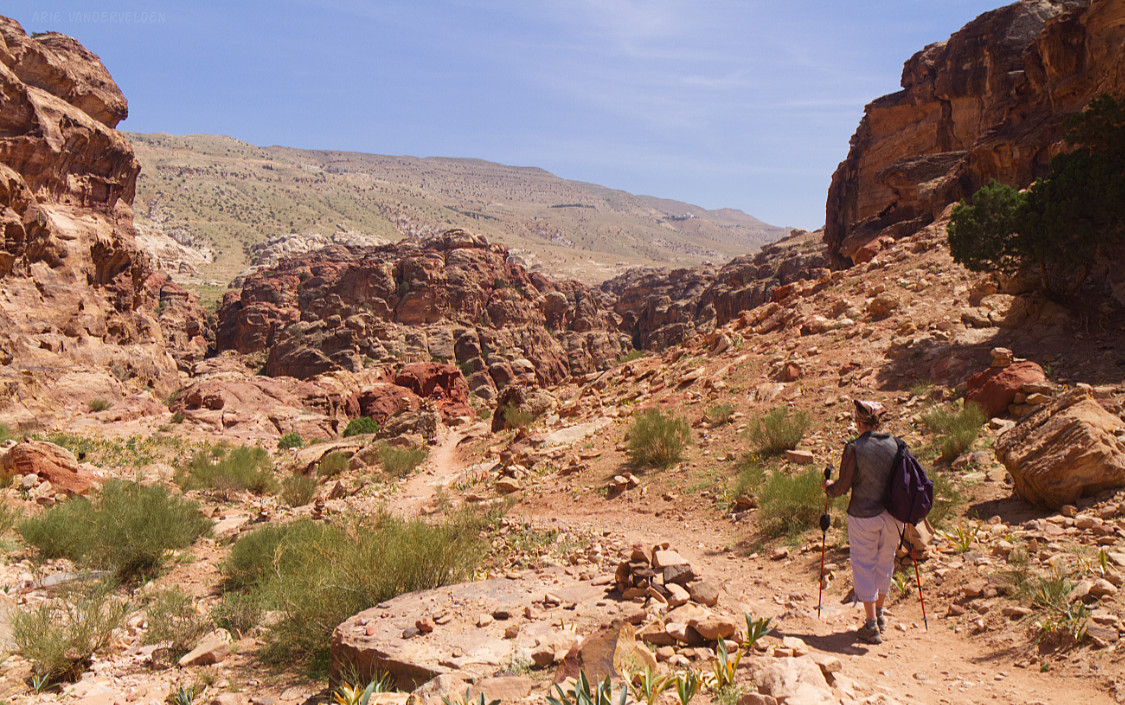 A short distance beyond the trail ends at an overlook which offers a bird’s-eye view of the Treasury, now in the afternoon shade. 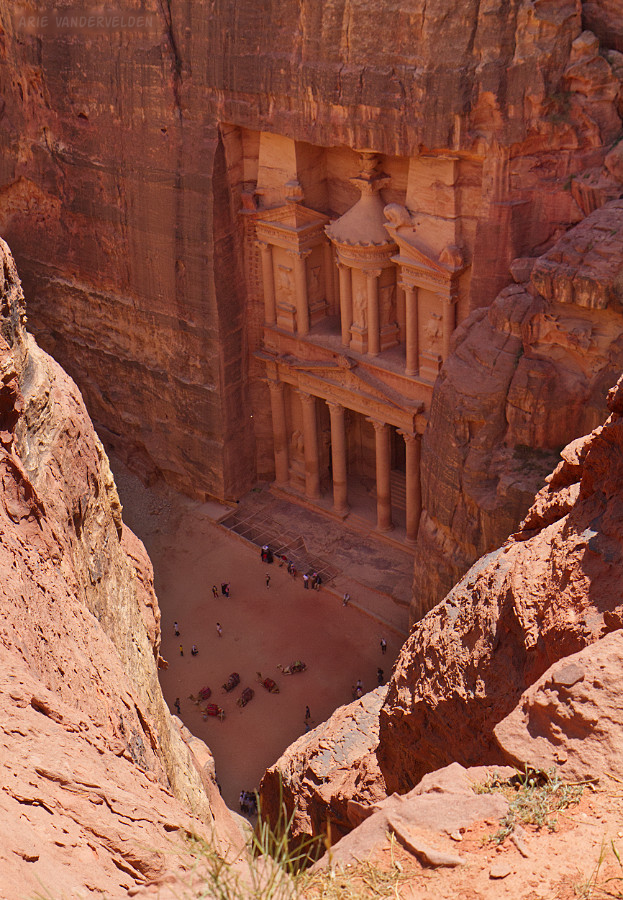 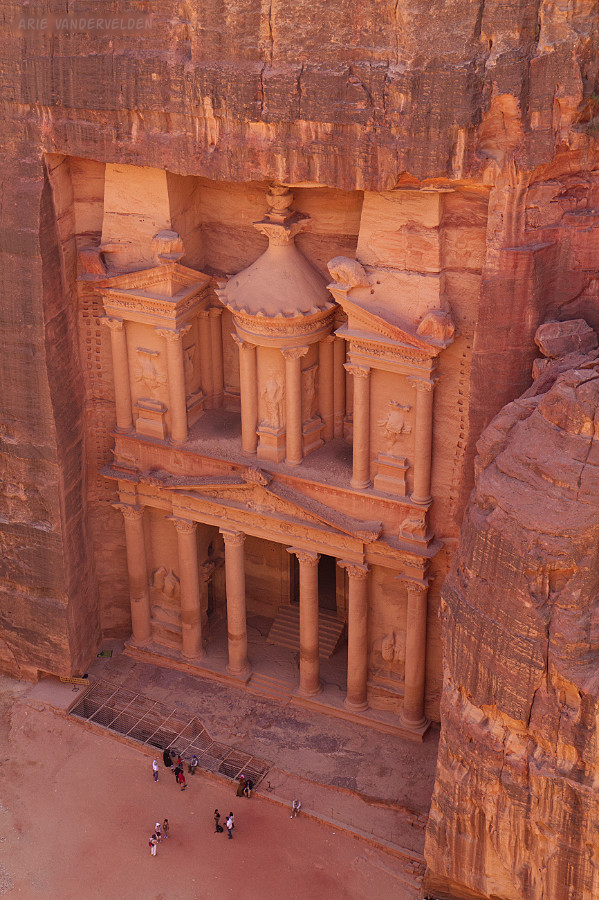 Back down in central Petra, Diana bought some trinkets from the Bedouin kids. 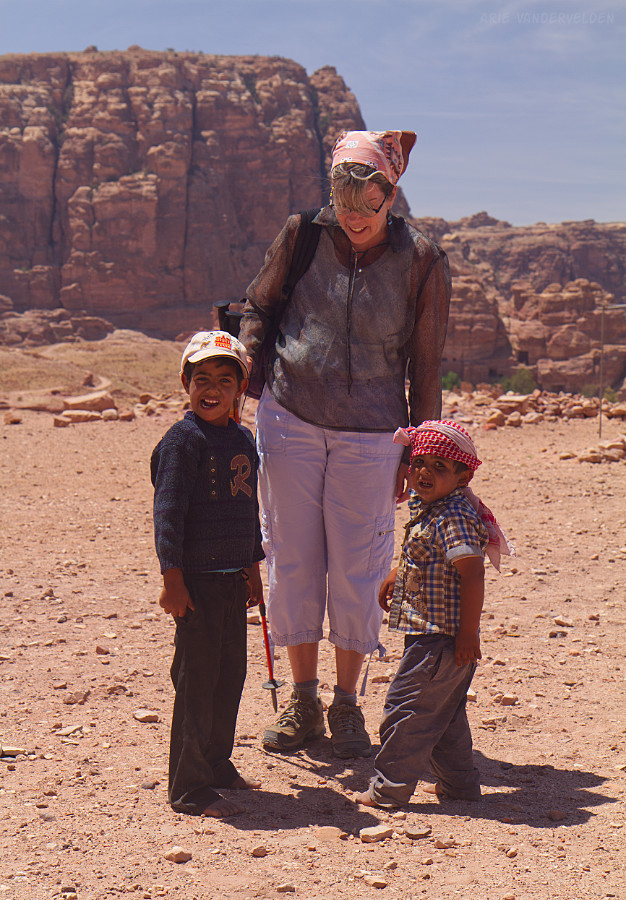 The Monastery is a standalone tomb some distance away from central Petra.  The trail starts behind the cafeteria and heads up a wadi with a sandy bottom. 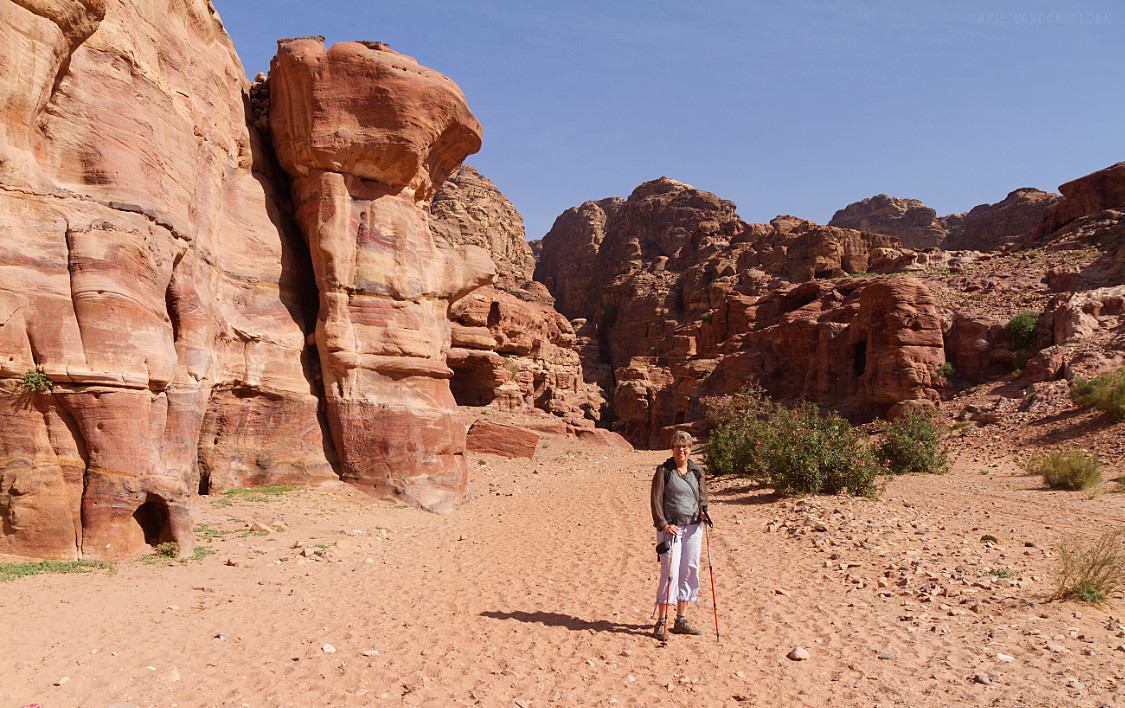 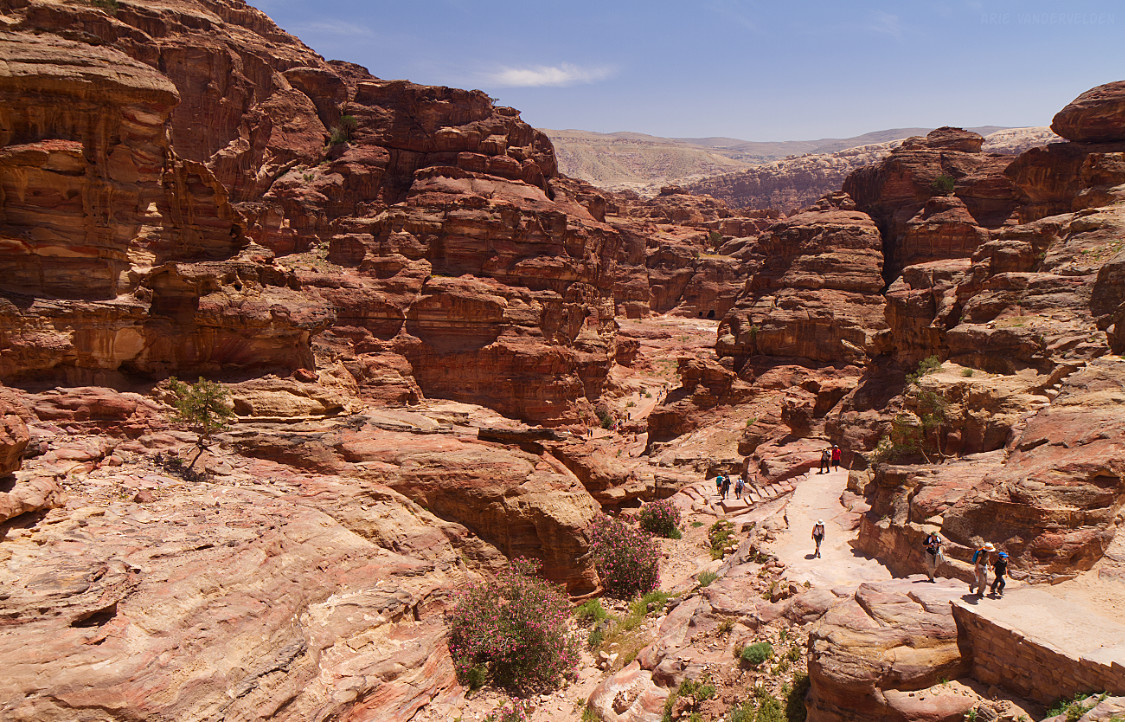 There are Bedouin who offer to take tourists up on donkeys.  It looked like a jarring ride, often perched over top of precipices.  I kept my feet on the ground and photographed the donkeys instead. 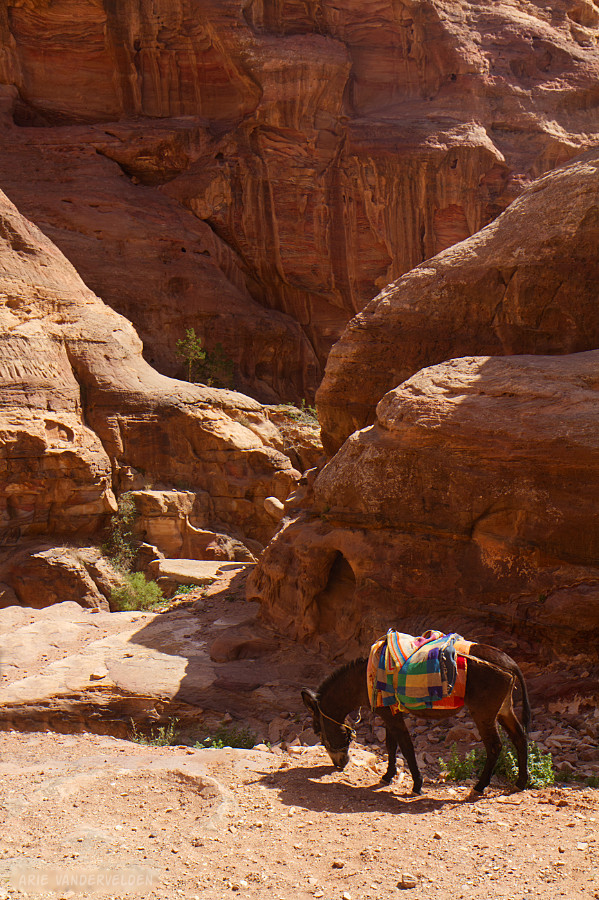 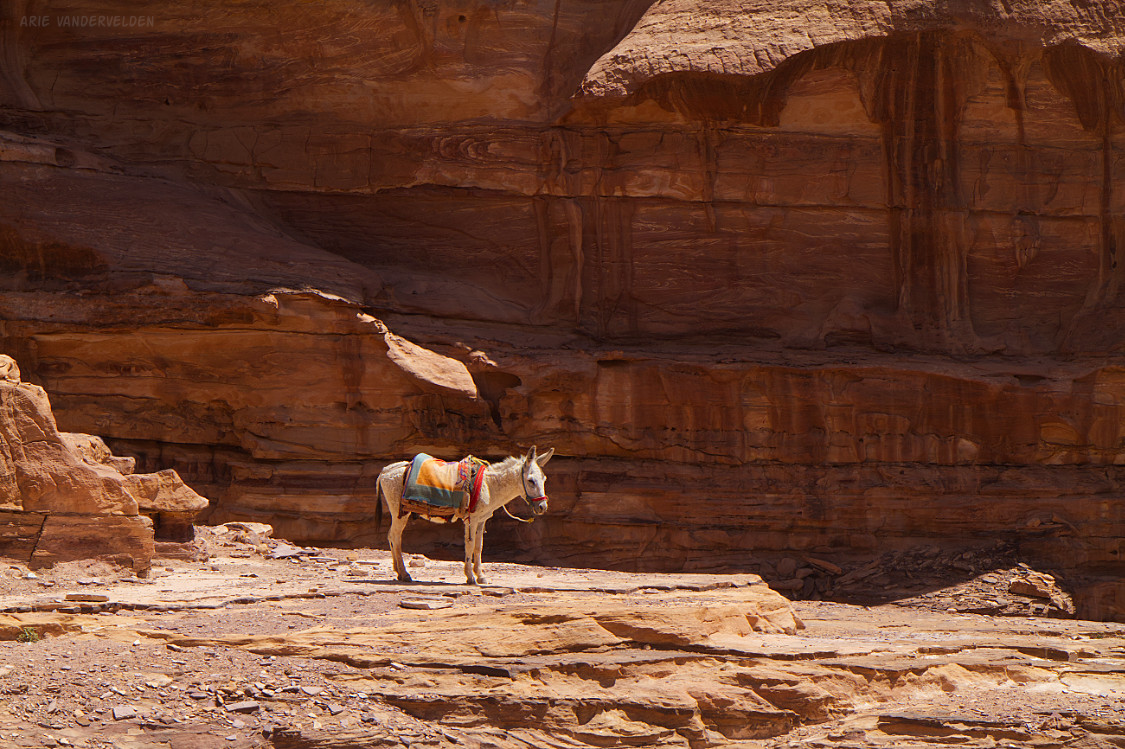 After about a kilometer or so the trail leveled off, and we arrived at the Monastery.  We wiped the sweat off of our brows and once again our jaws dropped open.  It is an impressive sight. 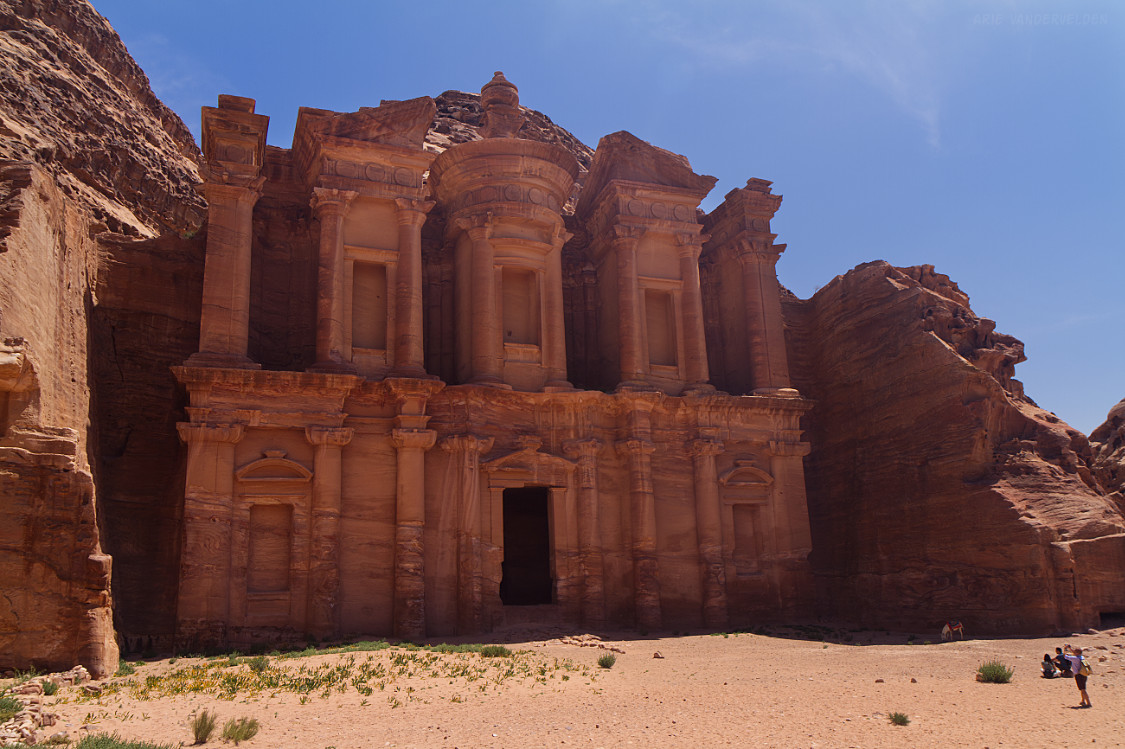 The Monastery (Ad-Dayr in Arabic) is a huge tomb, and immaculately preserved.  It is possibly a temple dedicated to Nabatean king Obodas I.

A trail led on, up a hill across from the Monastery.  There were signs promising “The best view in Petra!” and “The best view in the world!” pointing in various directions.  These signs were set up by enterprising Bedouin hoping to sell drinks to tourists.  We continued upwards to a flagpole with a Jordanian flag. 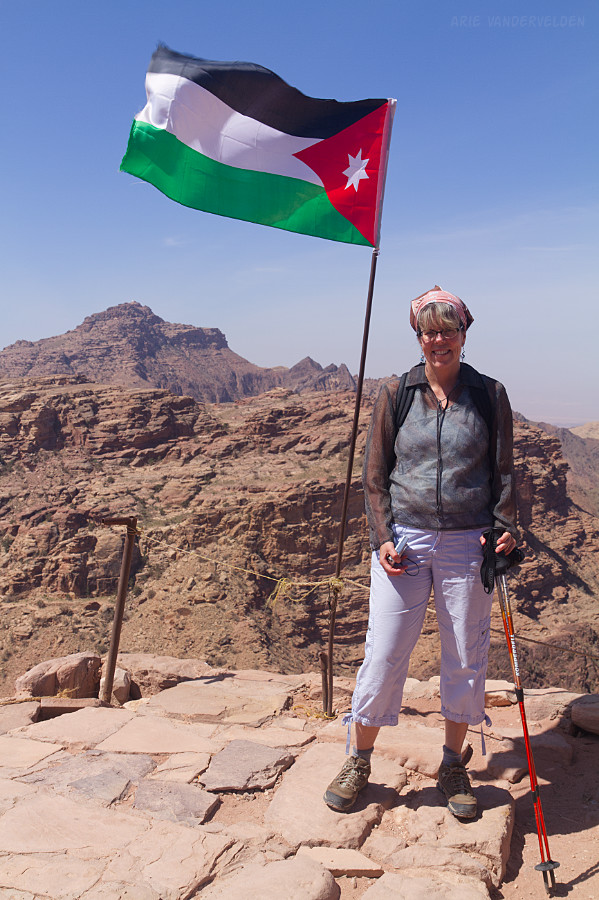 The best view in the world?  Maybe.  It certainly is impressive. 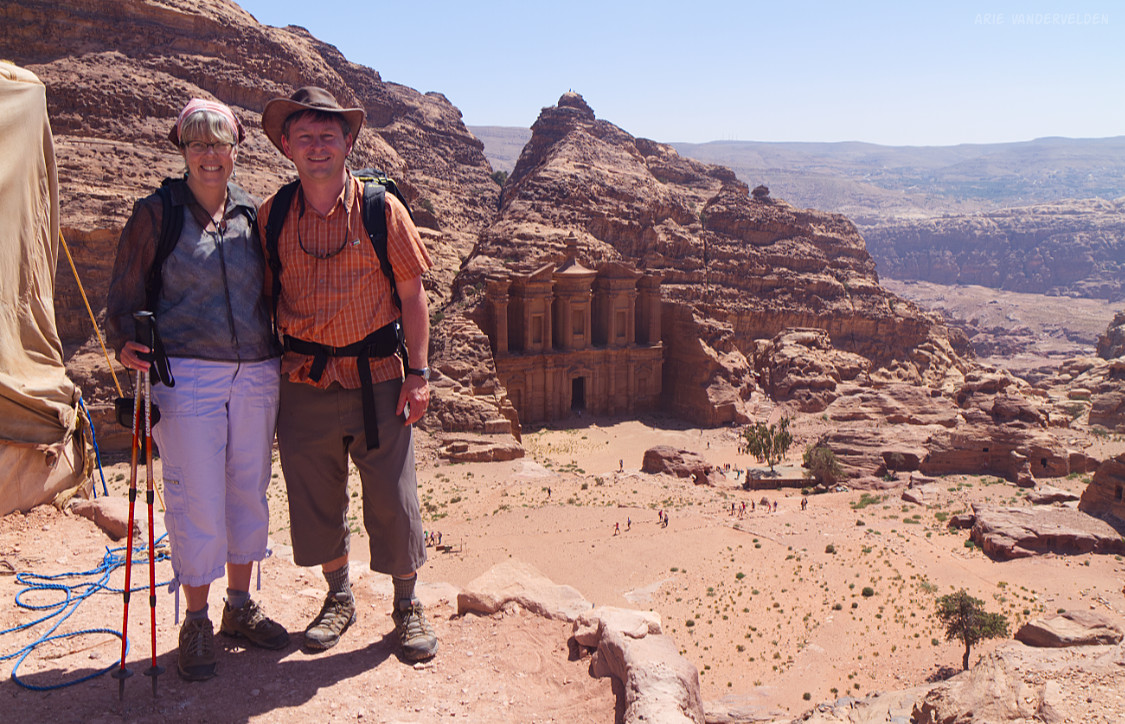 Diana shot this picture across the shoulder of a Jordanian tourist. 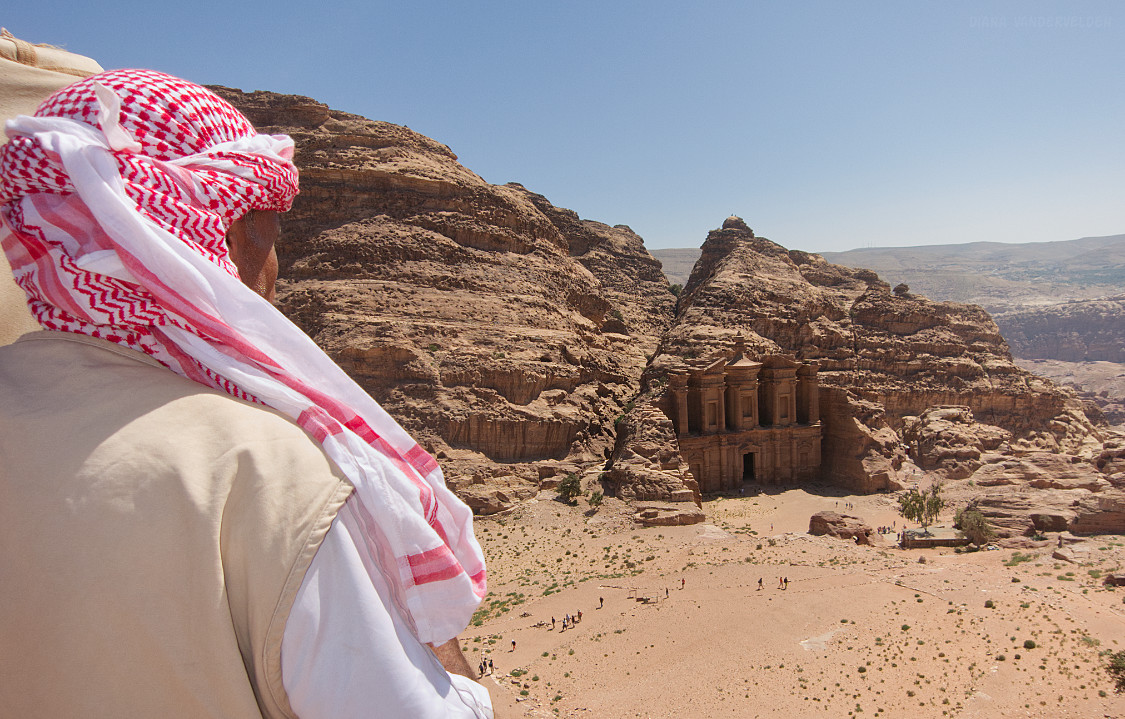 We hiked out the way we came: back to central Petra, to the Treasury, up the Siq, and then to Wadi Musa, the modern gateway town to Petra.

My last photo is Wadi Musa at sunset, looking towards the mountains that hide Petra.  No wonder this ancient city was kept a secret for many centuries. 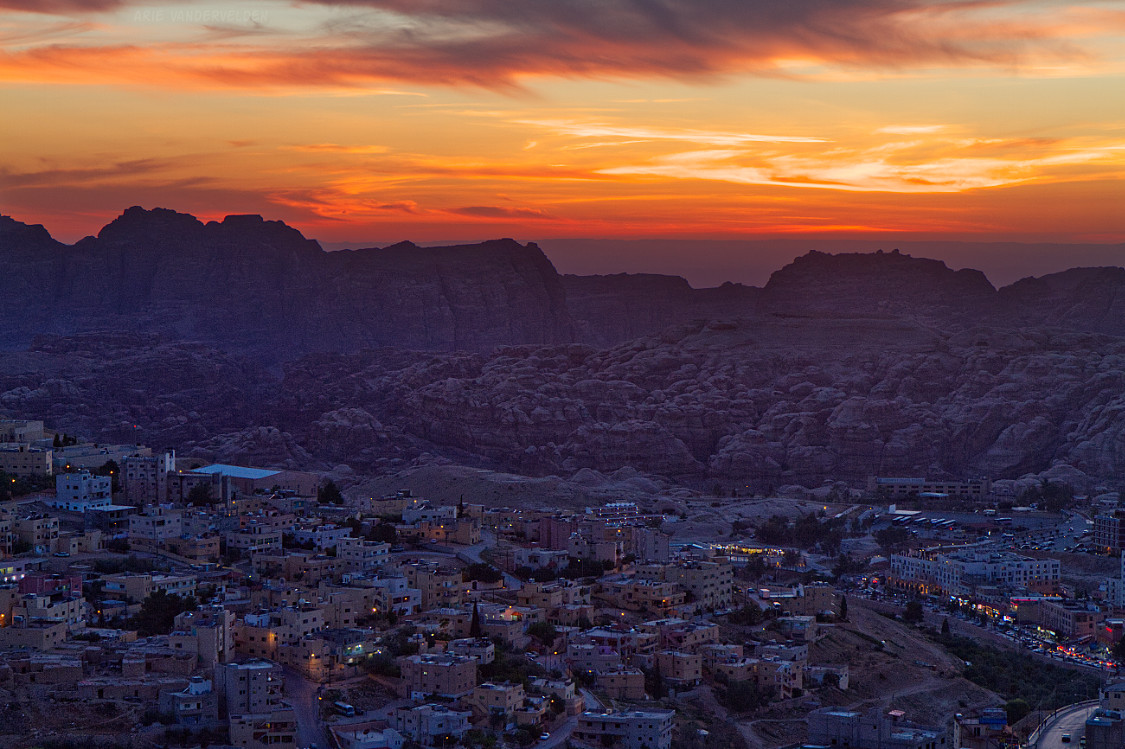