In part 1 of our trip we meet our guide Abdul, we scramble up to the Great Unconformity where T.E. Lawrence once filled his canteen, and we tour around in Abdul’s truck.

In the late afternoon, Abdul dropped us off at the mouth of a narrow canyon.  He told us he’d drive around the mountain and meet us on the other side.  Diana, the two American guys and I set off down the trail. 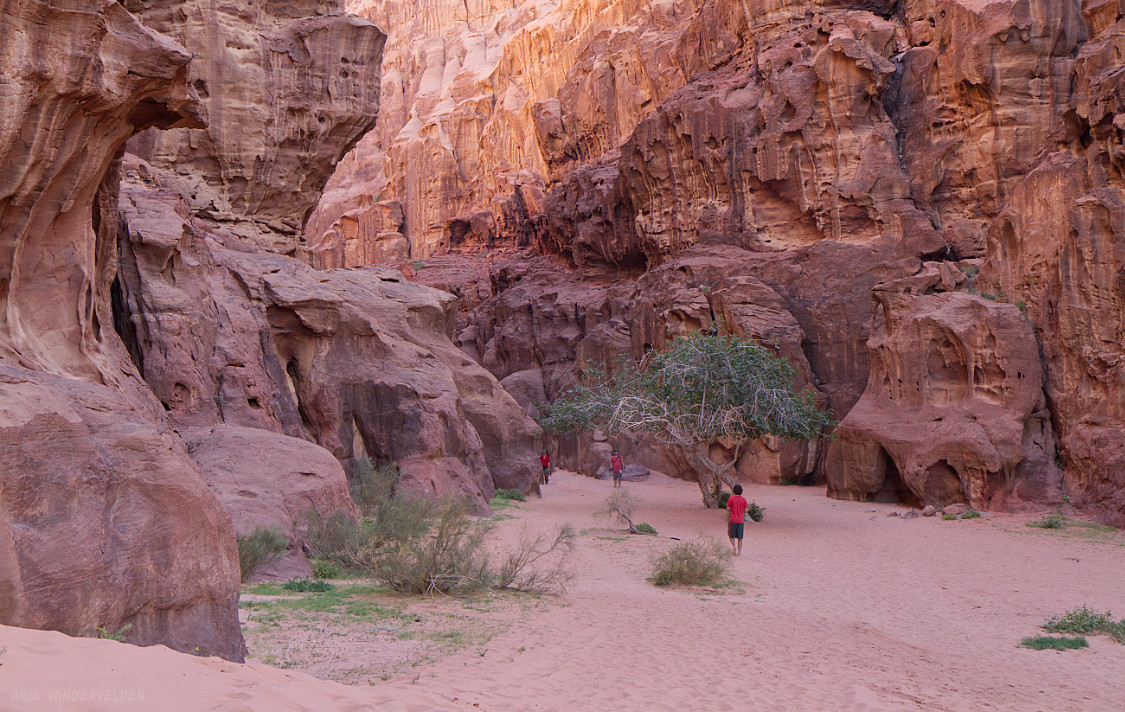 Soon the sandstone canyon walls closed in.  We trudged up the magenta-coloured sand. 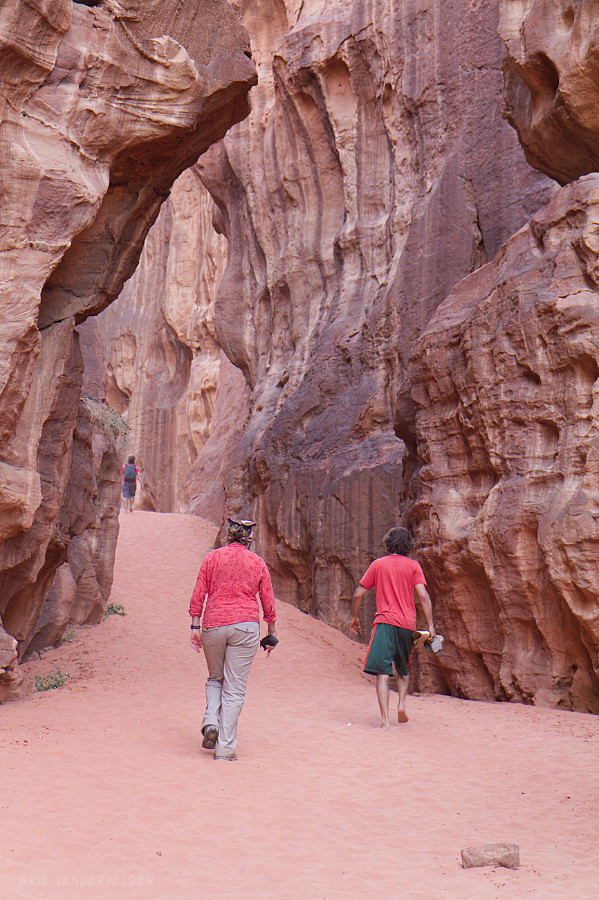 The sand ended at a small rockstep.  We scrambled over the top, and on the other side the sand was downsloping, and we could see the canyon exit. 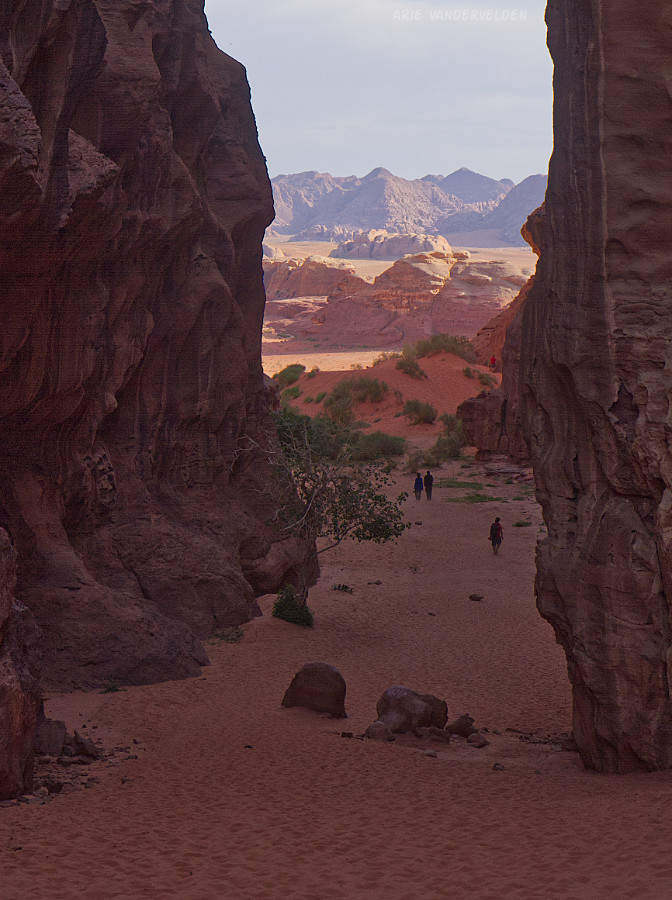 Diana talked to the two Californian tourists as we walked along. 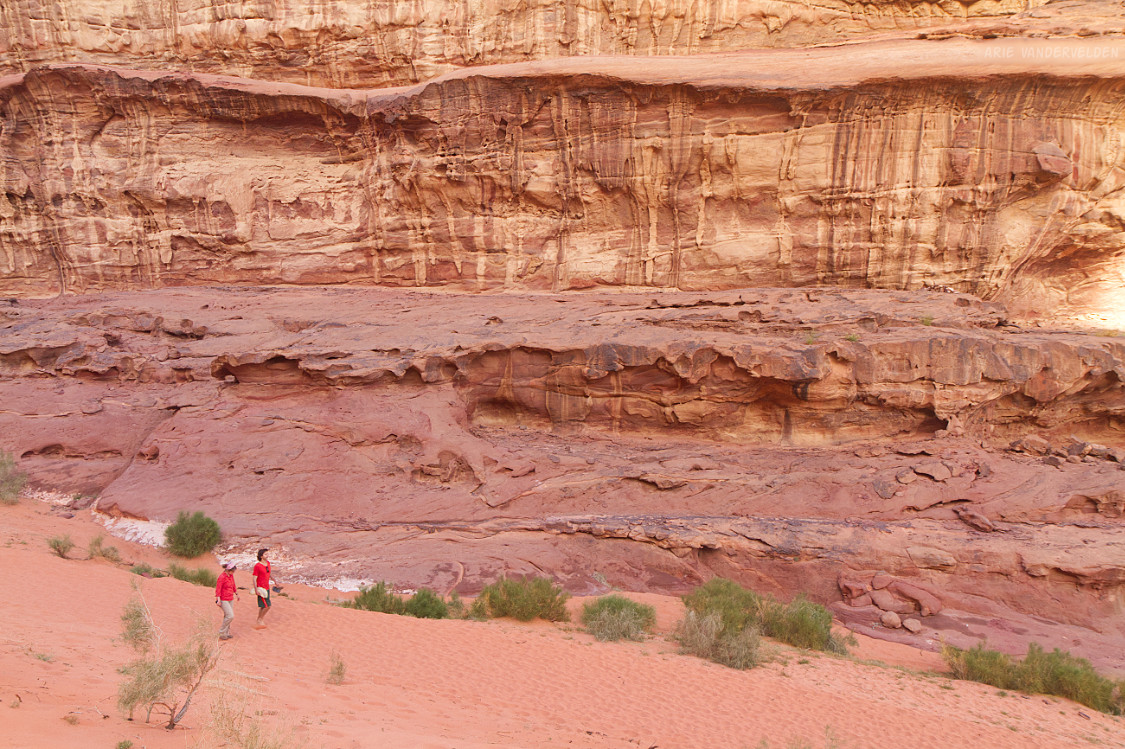 By now the sun was getting low in the sky, and the scenery was superb. 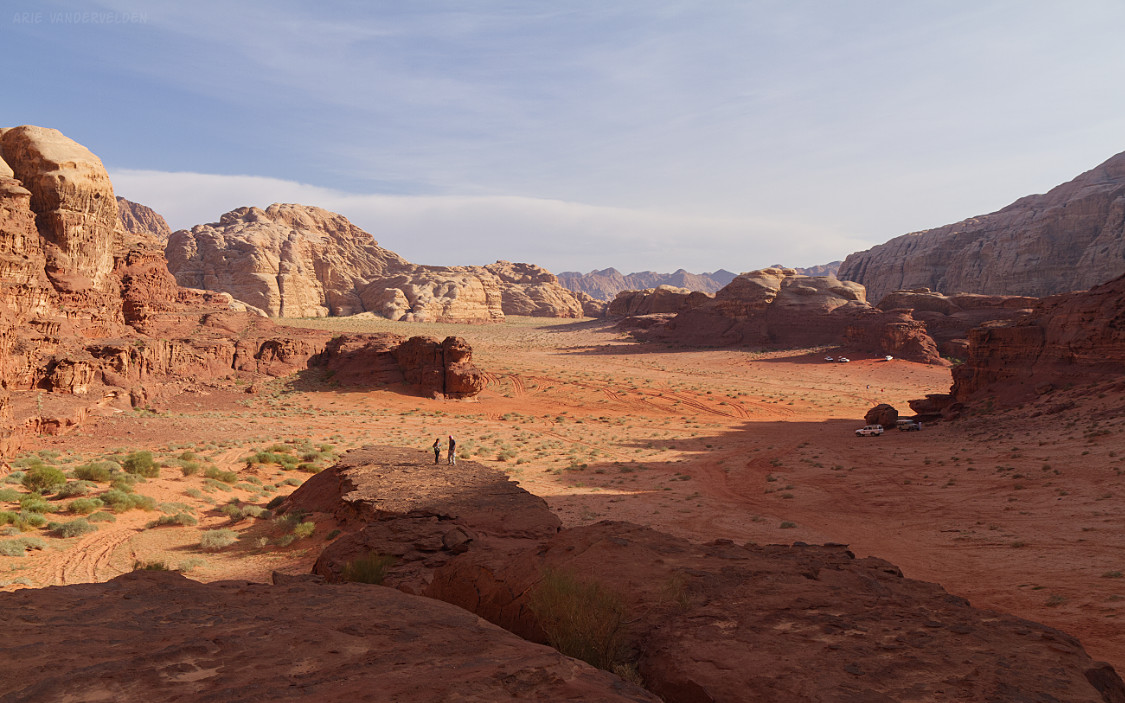 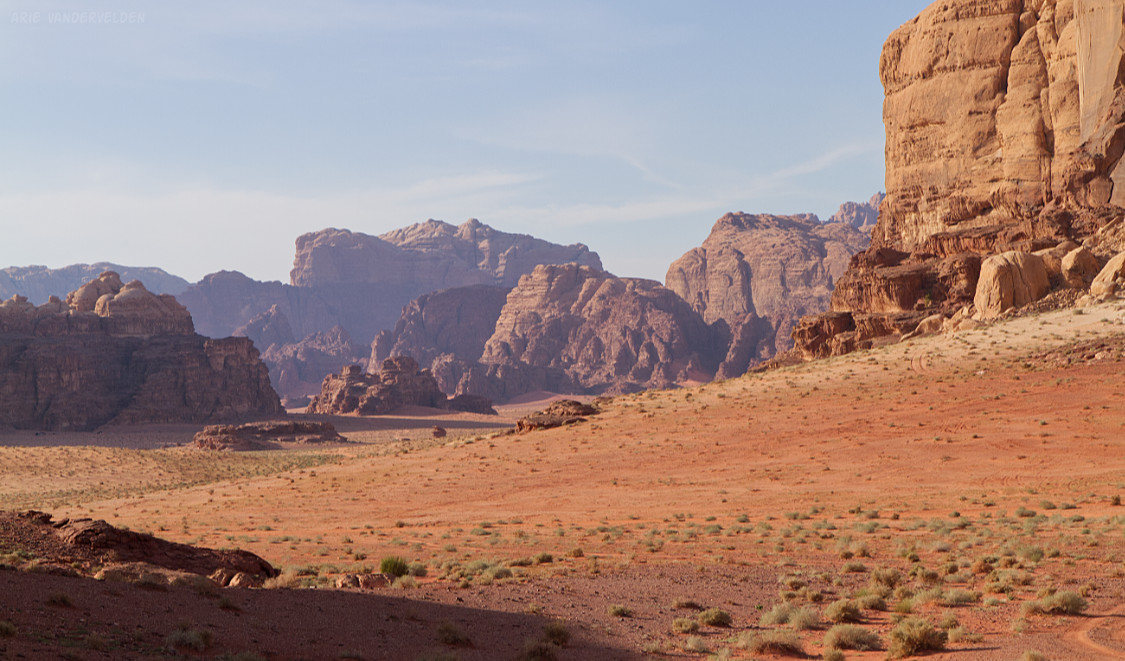 Across the valley, Abdul and some other Rum Stars guides were waiting and brewing up tea.  The Bedouin brew a black tea, to which they add some mint and copious amounts of sugar. 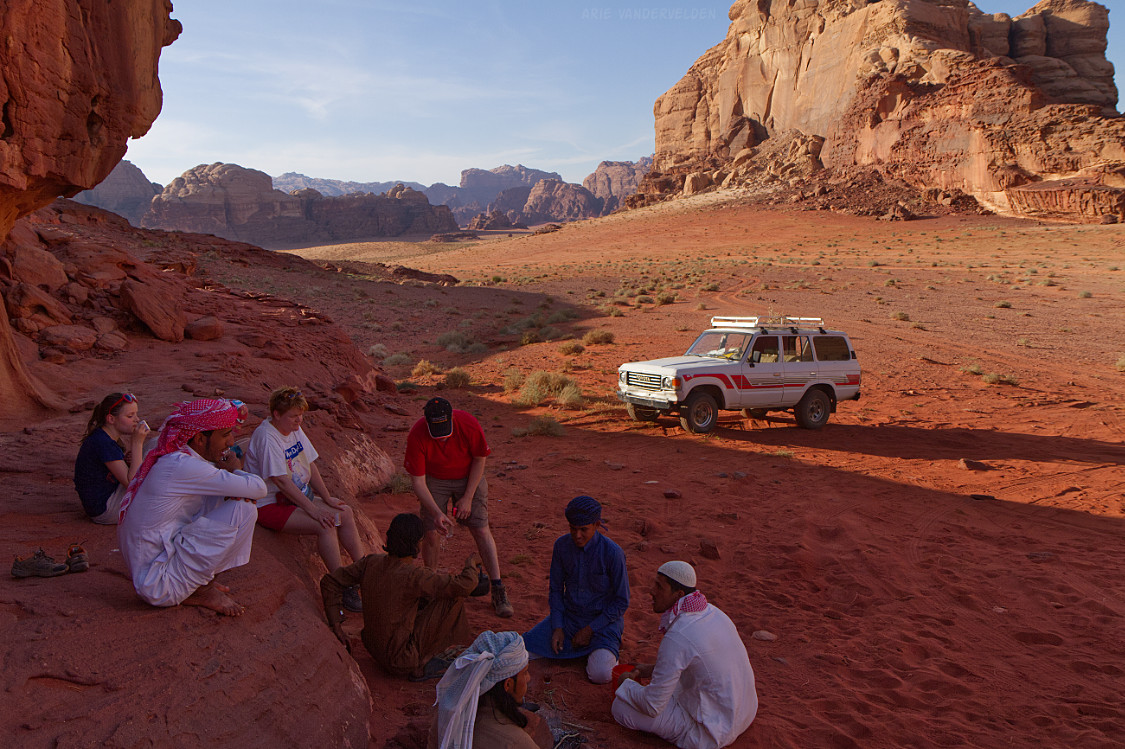 Abdul drove us to a sunset spot.  We climbed up to a sandstone ledge, sat down, and enjoyed the views. 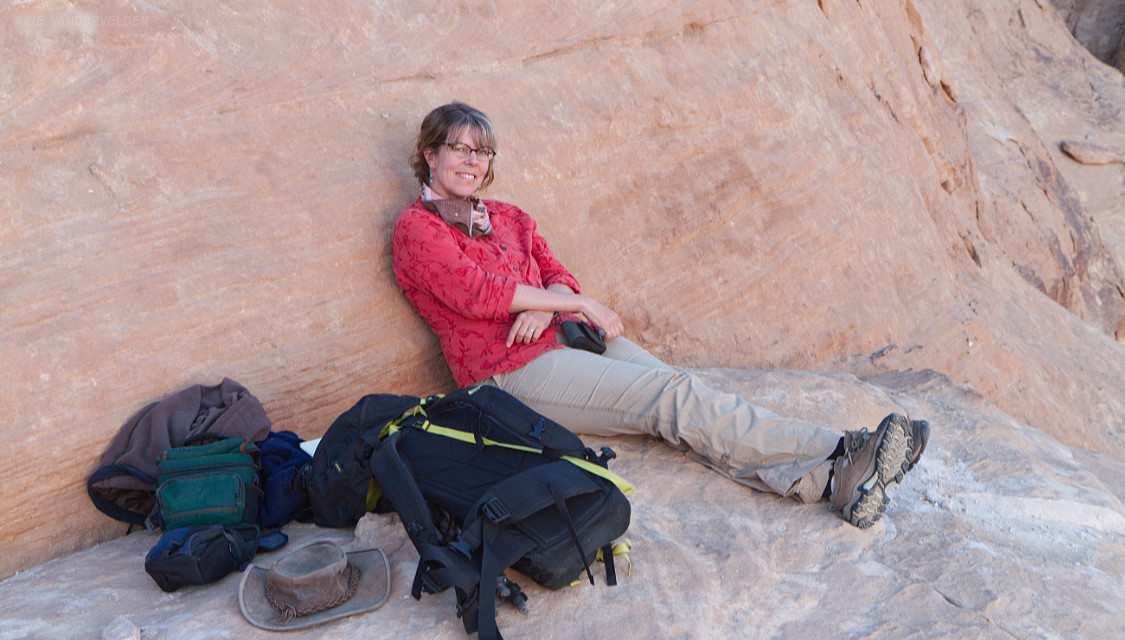 From our perch we looked straight towards the west, where the sun was setting behind some mountain ranges.  I enjoyed taking pictures. 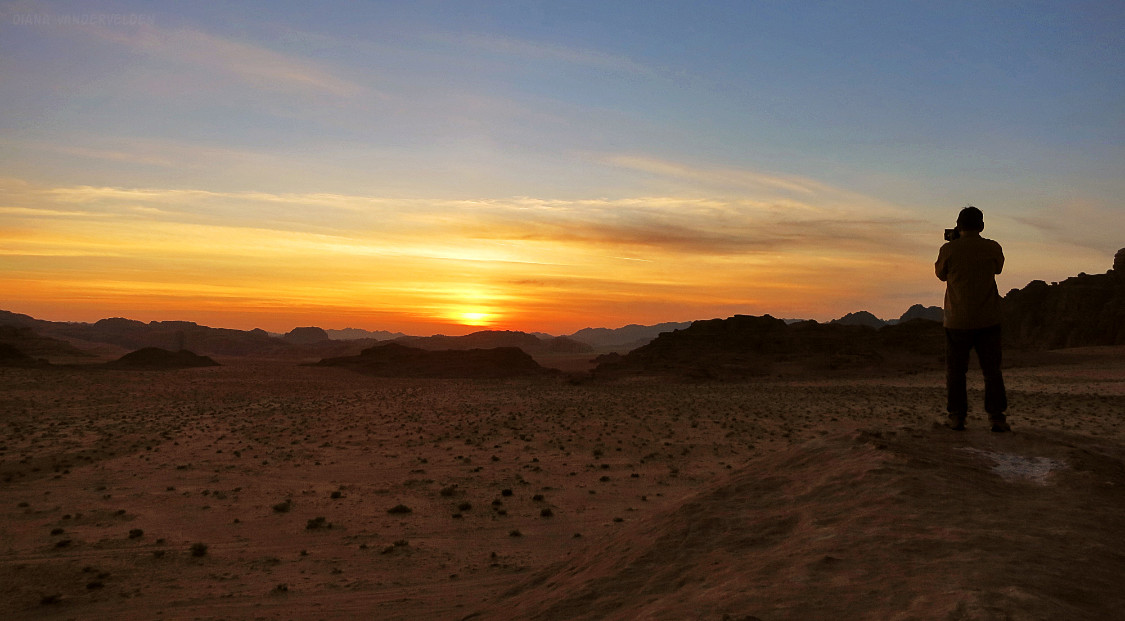 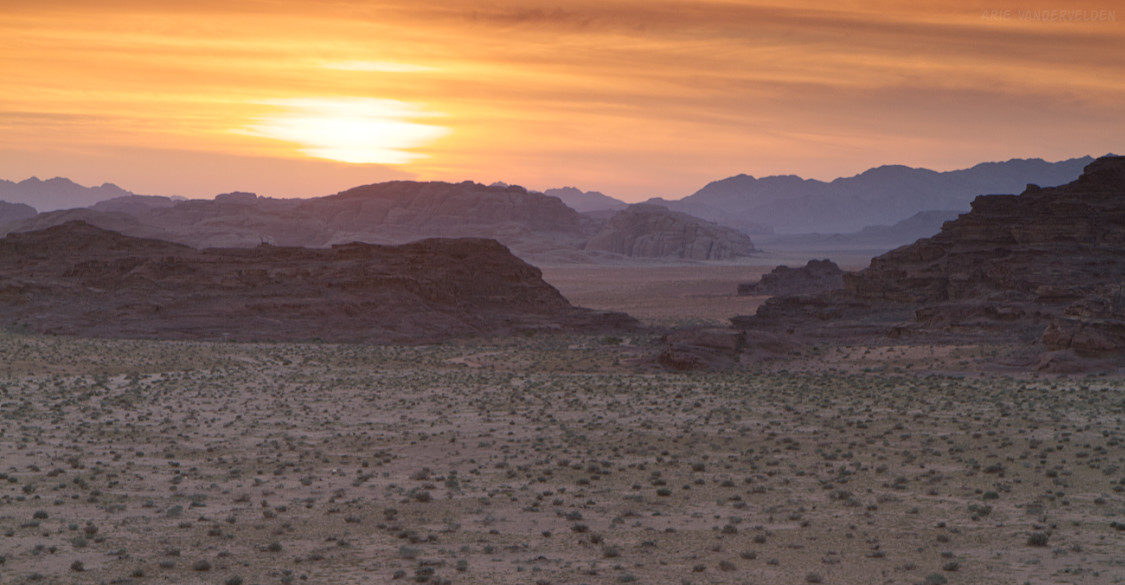 Below us some shepherds passed by with their herd of goats.  The shepherds cast long shadows in the low light.

Once the sun was down, we got into the truck and drove to the Rum Stars camp.  We settled into our sleeping tent (which I didn’t take a picture of – doh!) and then headed over to the mess tent.  The food was fantastic.  Afterwards the guides picked up some instruments and entertained their guests with some folk songs. 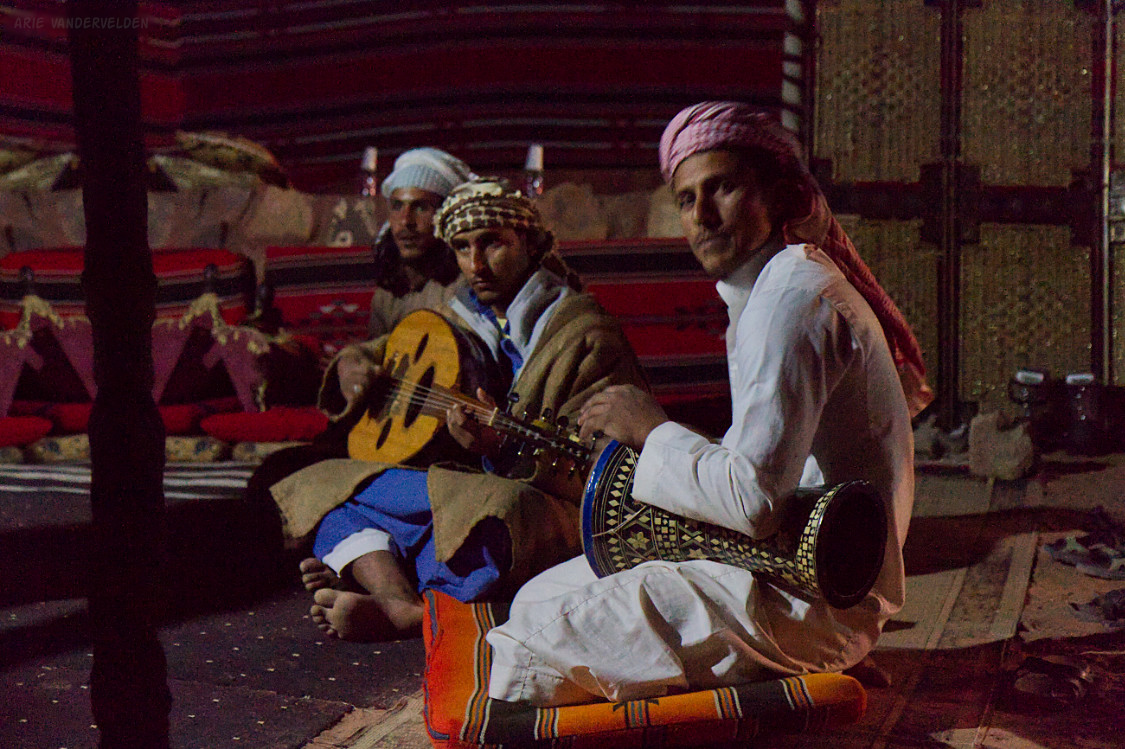 The guides played the oud and a drum while singing. 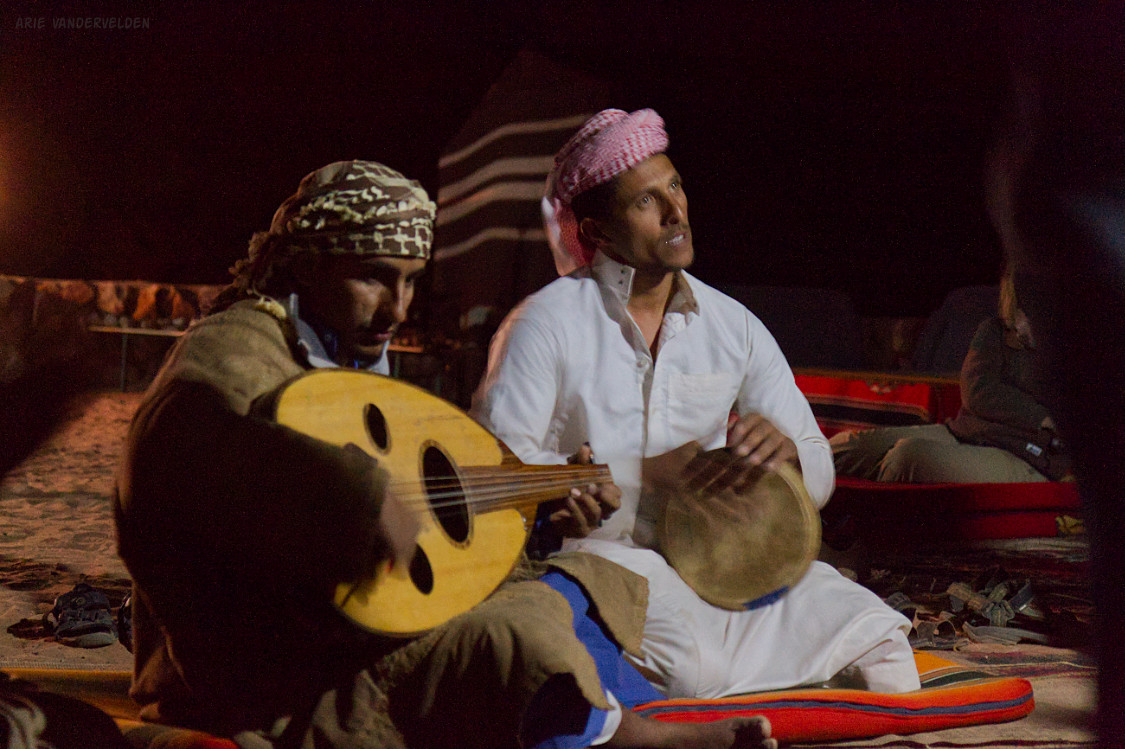 Afterwards we wandered outside into the desert.  There were a lot of stars.  I improvised a tripod for pictures. 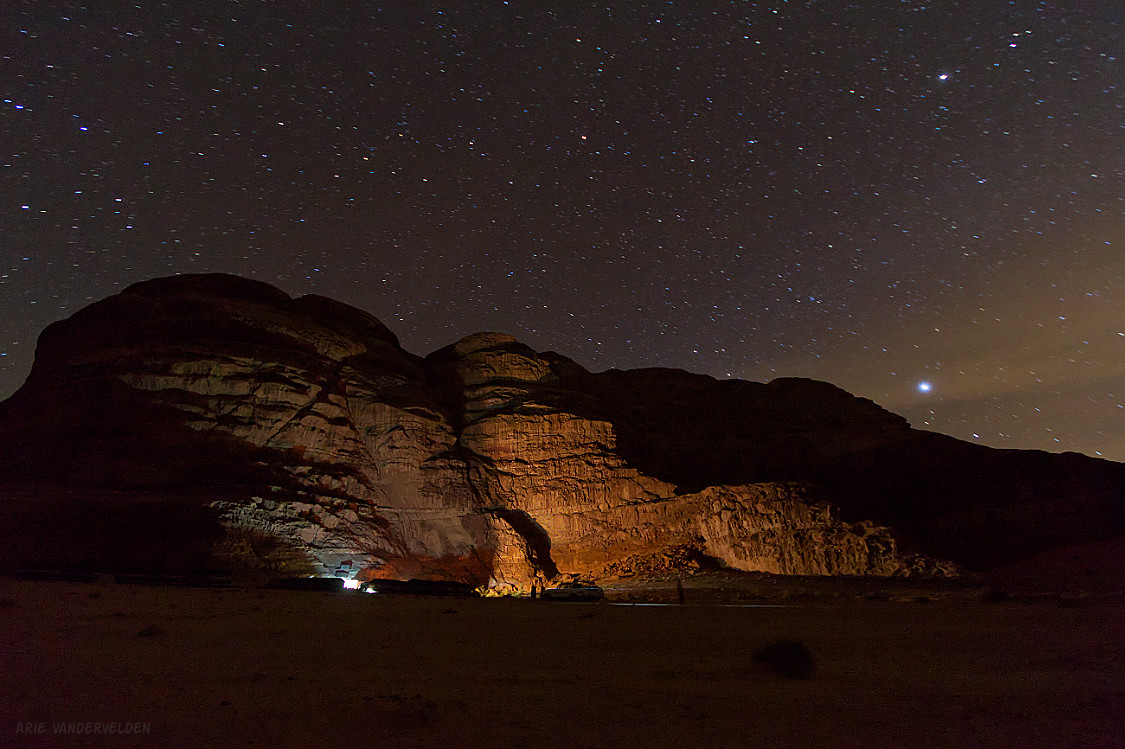 When we woke up in the morning and stuck our heads out of our tent, we spotted a camel-driver with several camels. 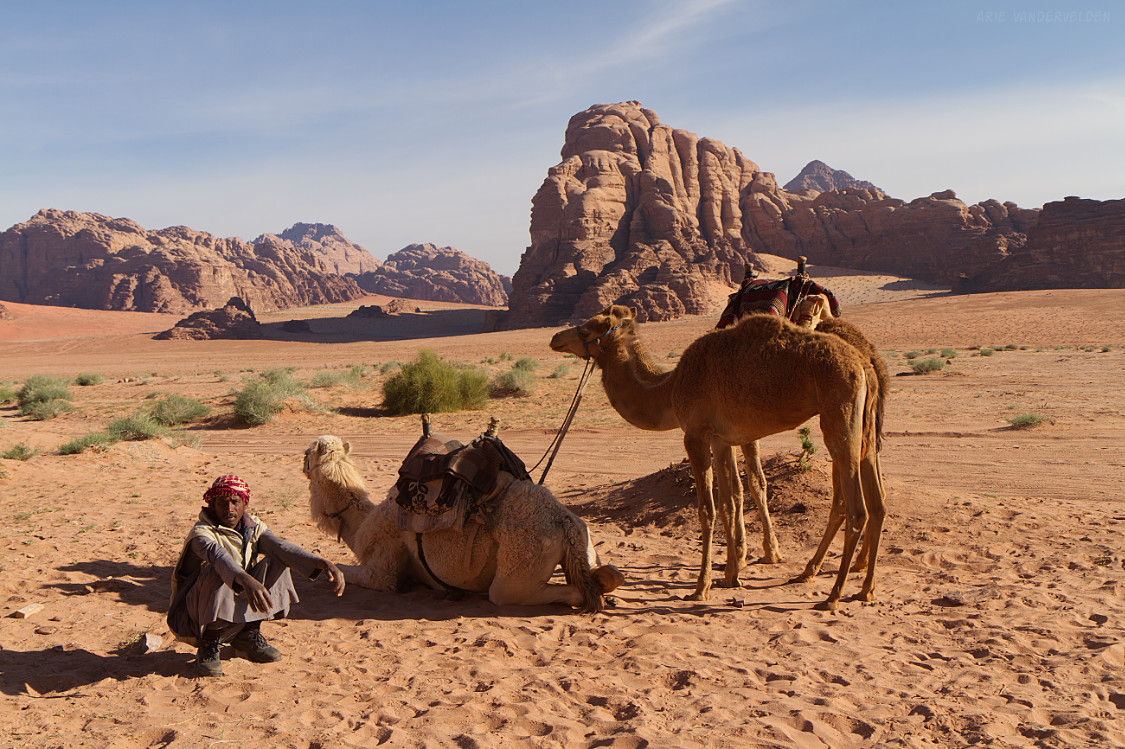 The camel-driver had come at dawn to pick us up.  Diana, I, and a German family had elected to go back by camel rather than by jeep. 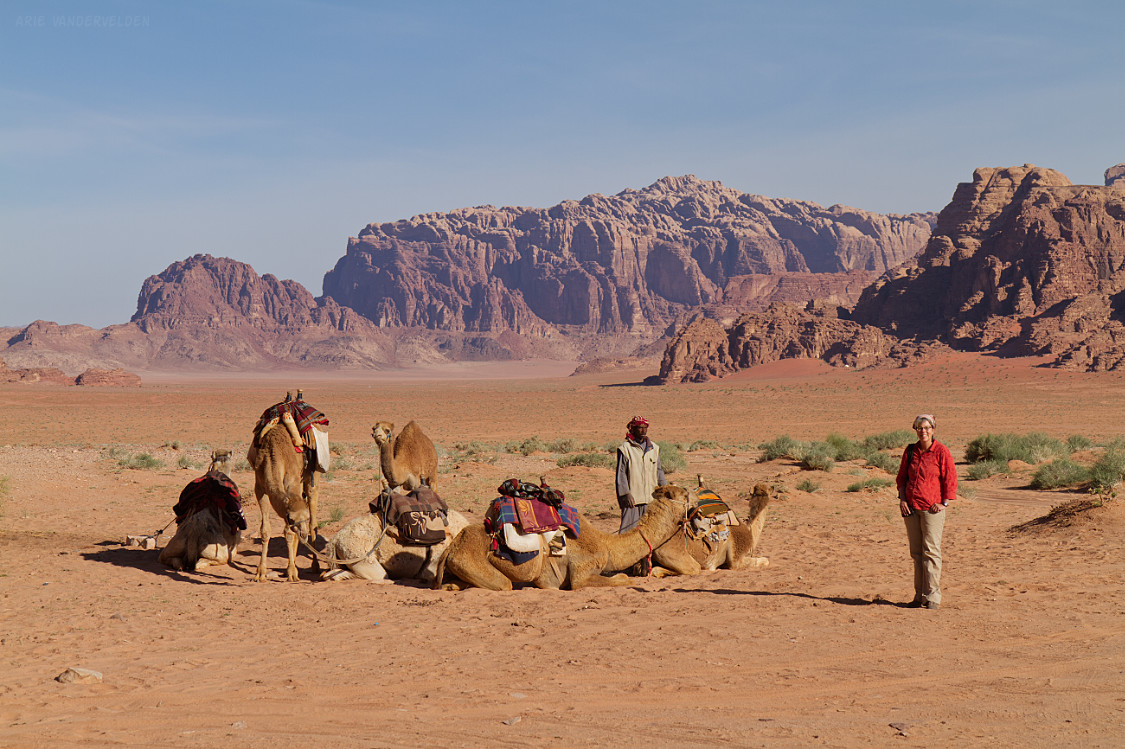 Diana was the first to mount her camel. It’s not easy getting in the saddle because even though the camel is crouching, the hump with the saddle on top is still pretty tall.   Once you’re seated in the saddle, the camel gets on his hind legs first, tossing you forward like a mechanical rodeo bull, and then it stands up on its front legs. 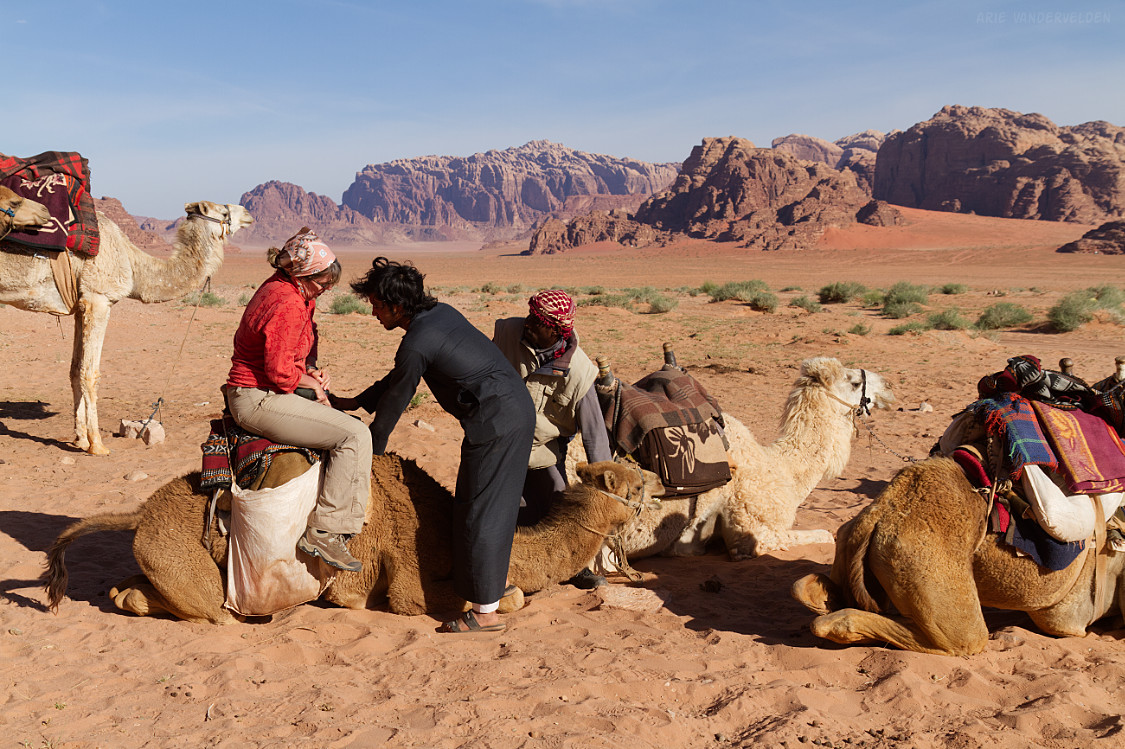 Once we got going I was surprised that the ride was pretty smooth.  It was not nearly as bumpy as I had imagined.  There are no stirrups to stretch your legs, but it helps to hook one leg around the front of the saddle.  Once we got going a ways I found a balance a bit more and I didn’t have to clutch the saddle horn for dear life.  Diana, though, said her arms were pretty sore after the ride.

In any case we did better than the German couple who, after an hour, decided to dismount, walk, and then get taken out by jeep (their young daughter, on the on the other hand, loved it and rode out with us the whole way). 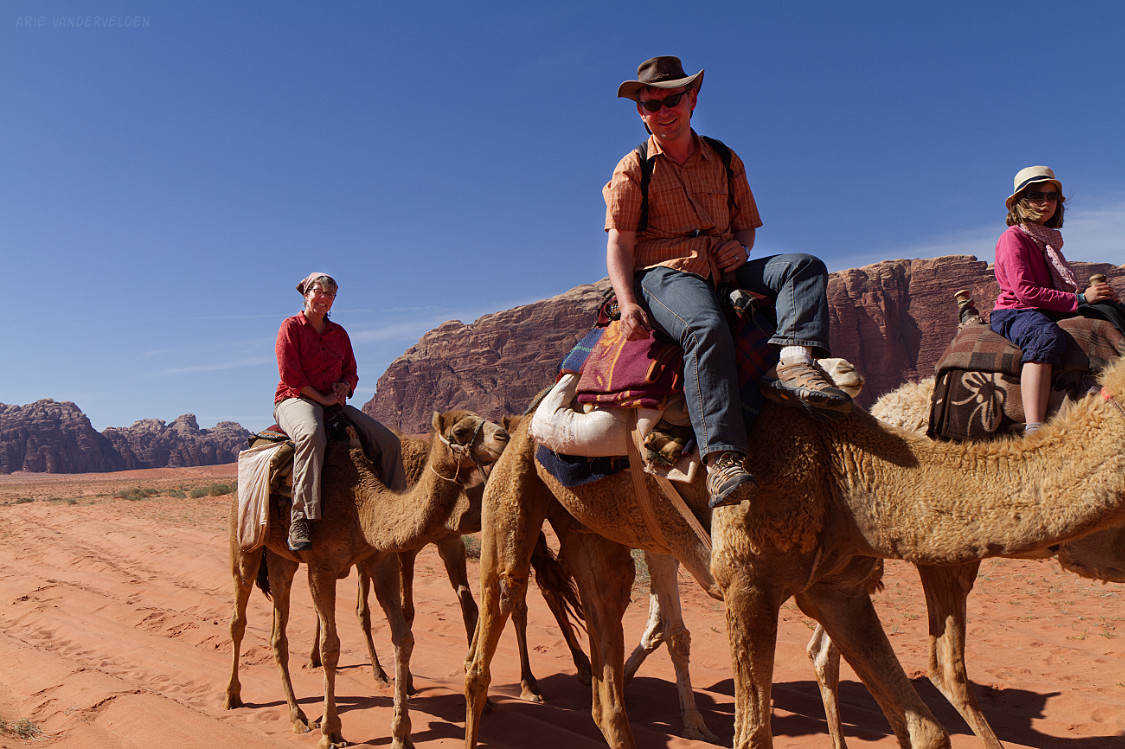 The scenery along the route was spectacular, and the weather was perfect: warm but not too hot, blue skies, and no wind.  We enjoyed the quiet and serenity.  Our camel driver made clicking sounds to spur on the camels.  We could hear the camels huge hooves churning through the sand.  Every so often the camels managed to find a tasty desert bush to tear out of the ground and munch on. 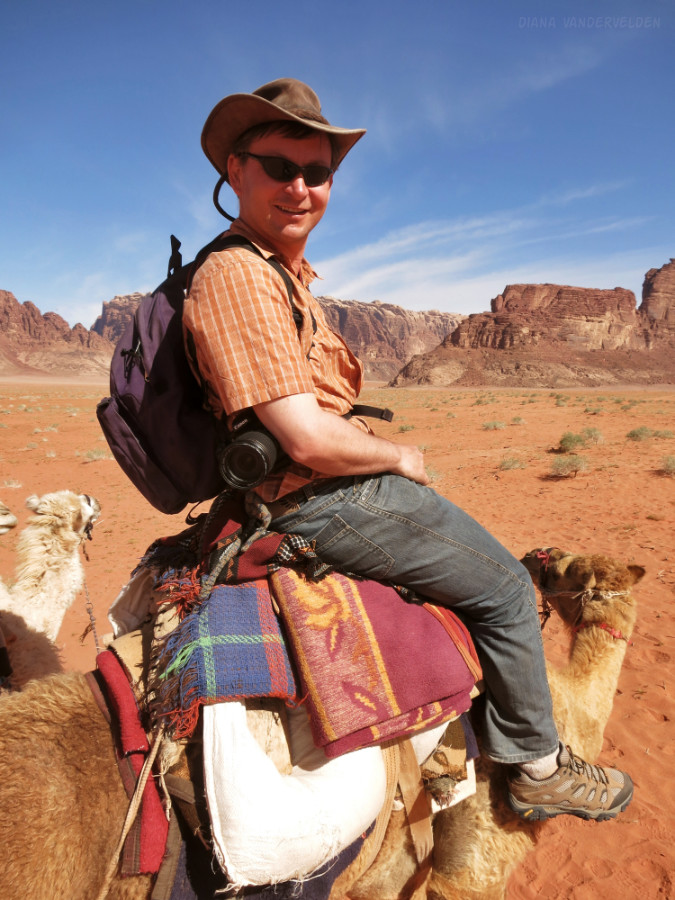 Diana was behind me. My camel must have had some indigestion because a few times it let out a large blast of gas, leaving Diana gasping.  For once I could blame the camel in all honesty. 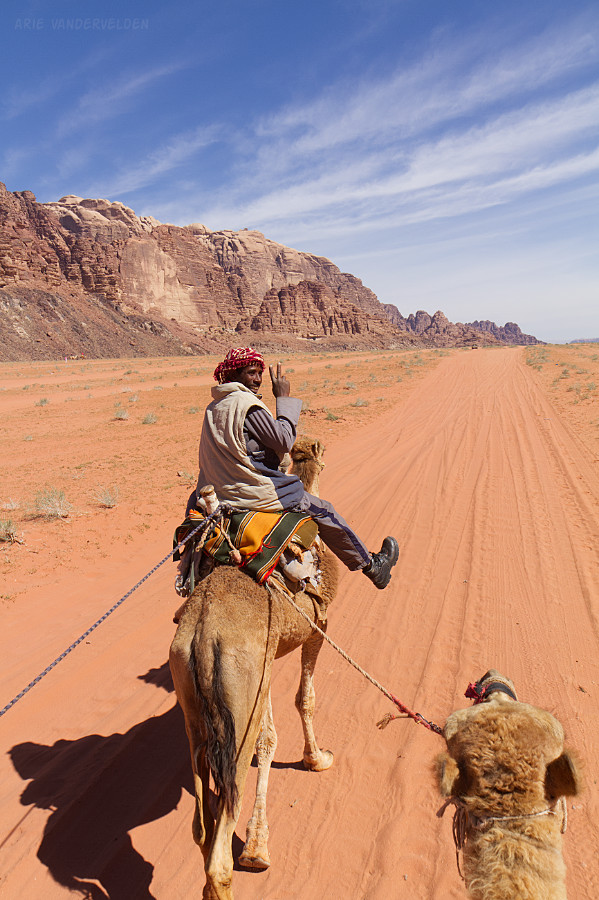 After several hours of riding we were back at Wadi Rum village and our car.  Riding a camel in the Arabian desert was a pretty neat thing to do.