Read part one of our drive across Canada here. 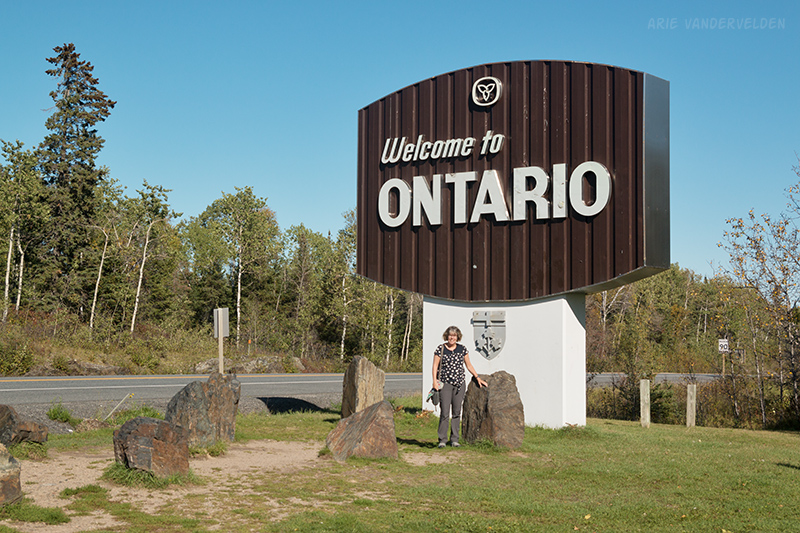 The first thing to say about Ontario is that it is deceptively large.  Driving 3750 km from Calgary to Montreal, you may think that by crossing the Ontario border you’re nearly there.  After all, you’ve crossed Alberta, Saskatchewan, and Manitoba.  There really is only Ontario to go because Ottawa to Montreal is just a short drive.  So, nearly there, right?  Wrong.  It’s 2000 km from Kenora to Ottawa.  Ontario is huge.

As we were taking pictures at the Welcome to Ontario sign we struck up a conversation with Jeff Laybolt, the “Wanderen Viking”.  Jeff is walking across Canada to raise money for diabetes research.  He started his walk in Nova Scotia and has walked across Quebec and Ontario.  Amazing!

Just beyond the Ontario border is Kenora.  We were surprised how pretty Kenora is.  There are beautiful old brick heritage buildings, and the town borders Lake of the Woods.  The town borders a bay, and there are nice public spaces and parks surrounding the bay.  Near downtown is a harbour with float planes tied to a dock.

Lake of the Woods is huge, and fishing is a big deal here.  On the far side of the bay is Husky the Muskie, Kenora’s mascot. 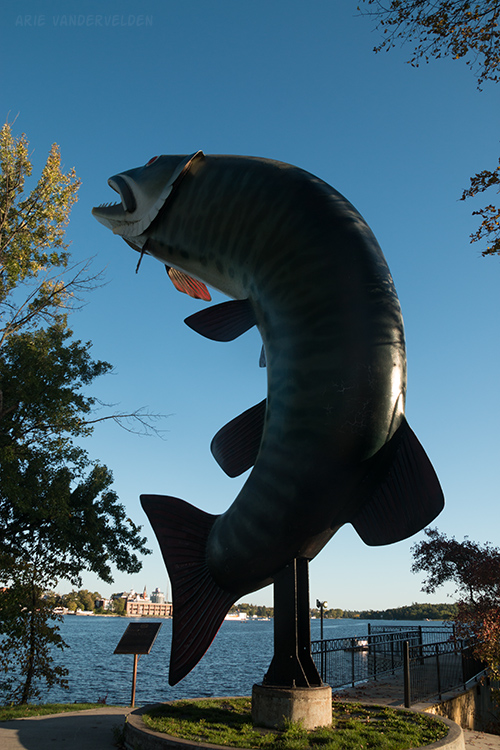 After our stroll through Kenora we drove on to Rushing River Provincial Park, about 25 km down the road.  The campground was set on a pretty lake.  Around the lake were scenic granite bluffs covered in lichen.  This was our first night camping on the Canadian Shield. 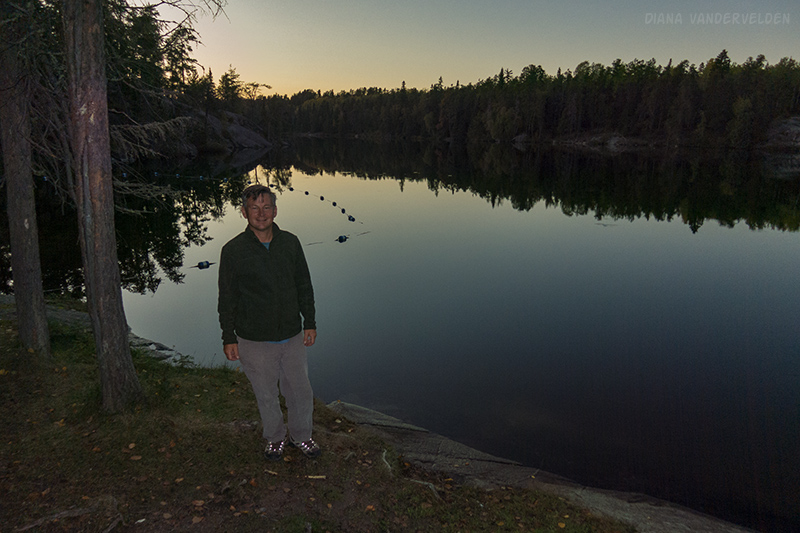 It had been a nice sunny day.  After a pretty sunset we enjoyed looking at the stars.  I think my camera may have captured a bit of aurora as well. 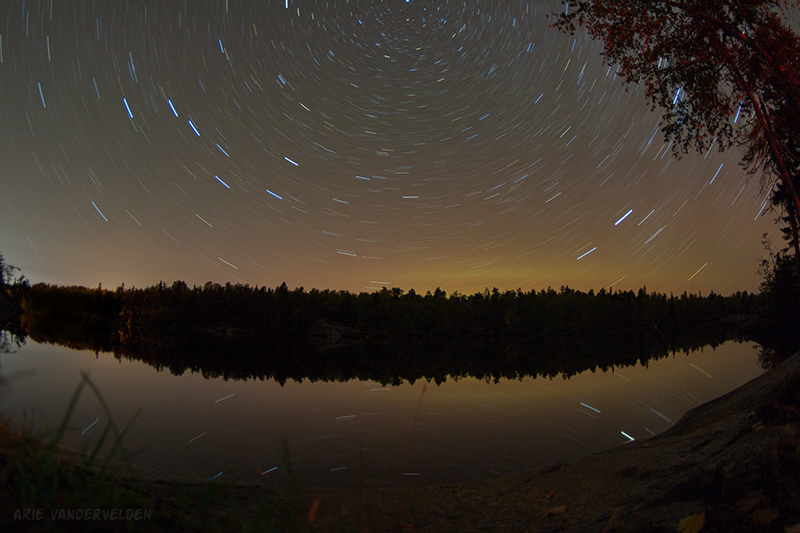 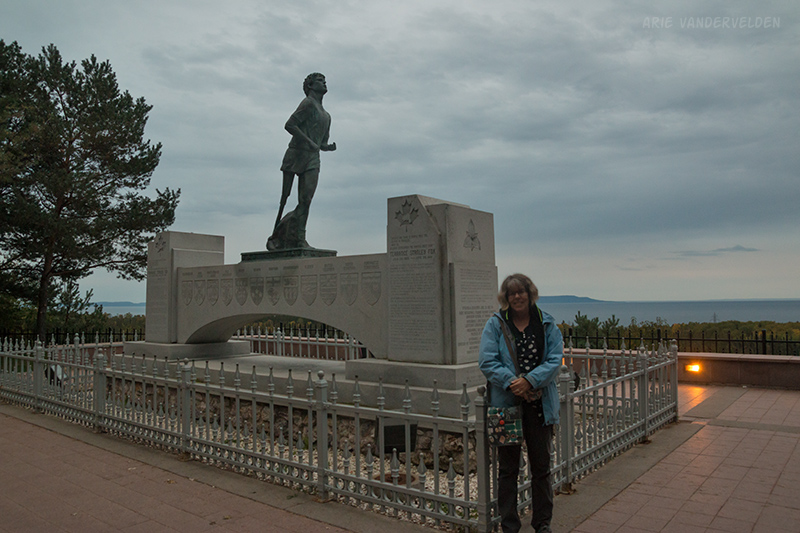 From the memorial we caught our first glimpse of Lake Superior.  Our destination for the night was Sleeping Giant Provincial Park, which is located on the tip of a peninsula that juts 30 km out into Lake Superior.  We were hoping for some nice scenery.  Instead, the gravel road that goes down the skinny peninsula has been built so that nowhere along the length of it is there a view of Lake Superior.  The park’s campground is set on a small lake, not Lake Superior.  Disappointed, we left the next morning and continued along the trans-Canada highway, which skirts the north shore of Lake Superior.

Near the town of Rossport there is a campground called Rainbow Falls, on the shore of Lake Superior.  It was mid-afternoon and we could have driven further, but this campsite looked great and we decided to stay.  When planning our trip across Canada we picked some key things we wanted to do and see (you can’t do it all), and camping along Lake Superior was at the top of my list. 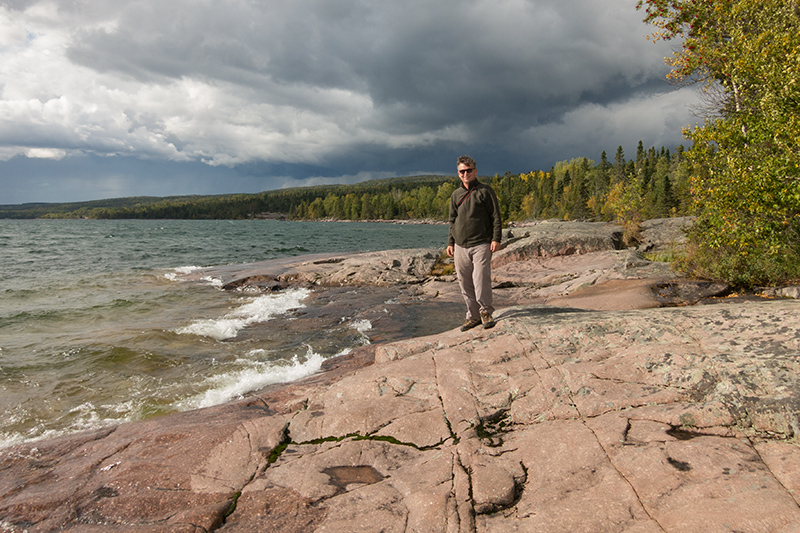 The campsite was spectacular.  Dramatic clouds swirled around, and at one point we huddled in our camper while a rainstorm swept through.  We had some nice sunny spells too. 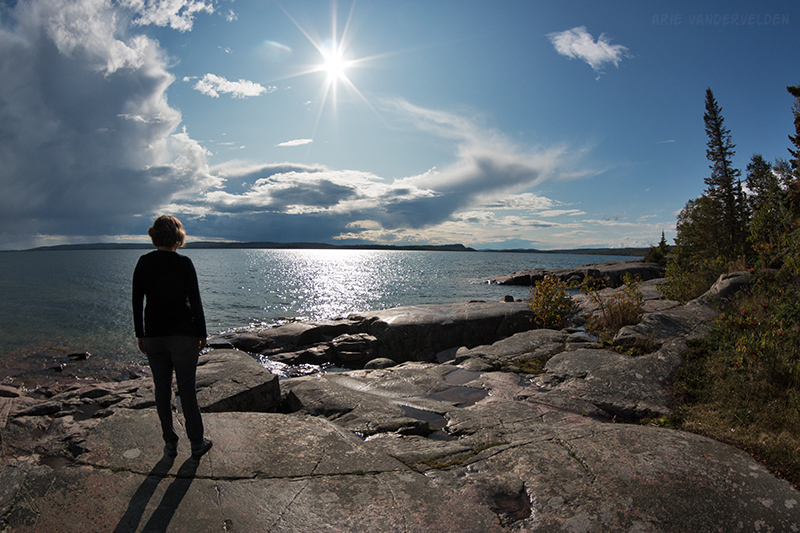 We plunked our campchairs on the rocks and cracked open some beers.  We watched the clouds and we listened to the surf crash on the granite shoreline. 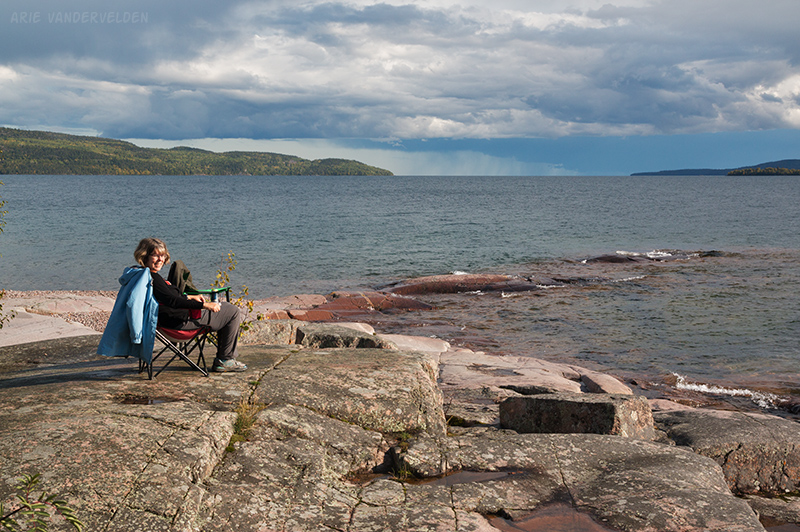 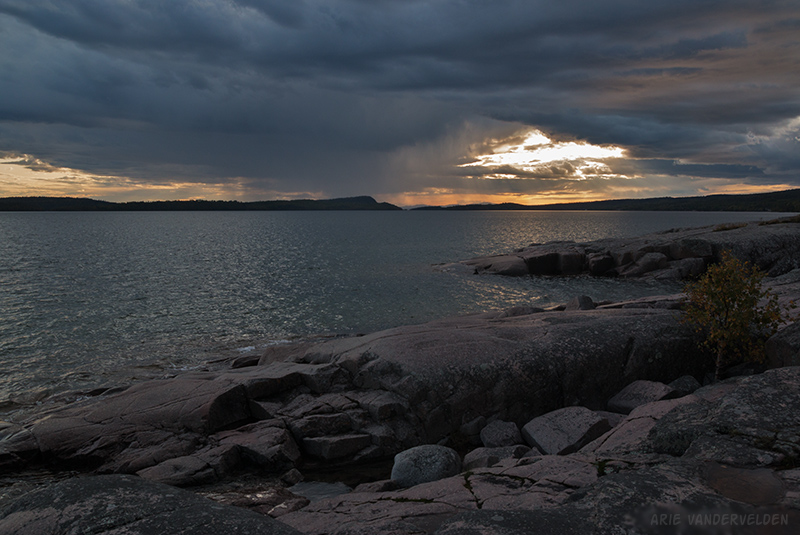 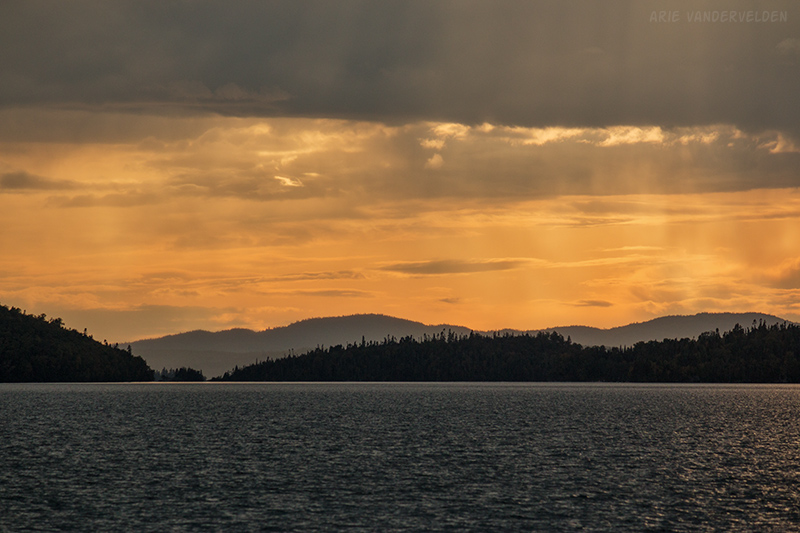 In the evening we roasted marshmallows on a campfire. 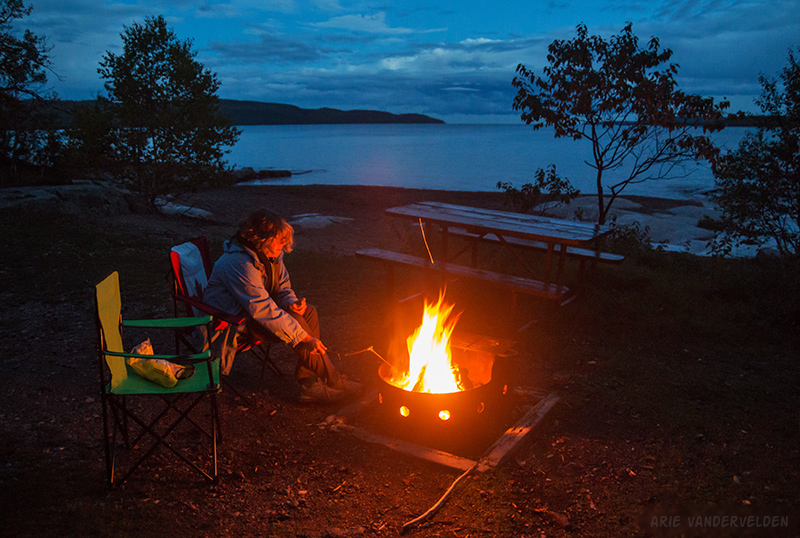 This was easily the nicest campsite we stayed at during our trip.  The next day we continued our drive along Lake Superior’s north shore.  We stopped at Terrace Bay, where we looked at Aguasabon Falls and strolled down the local beach. 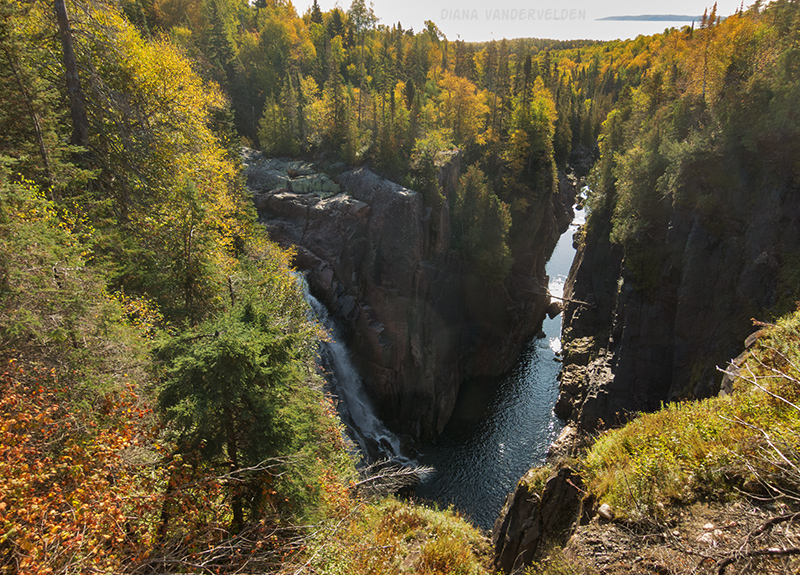 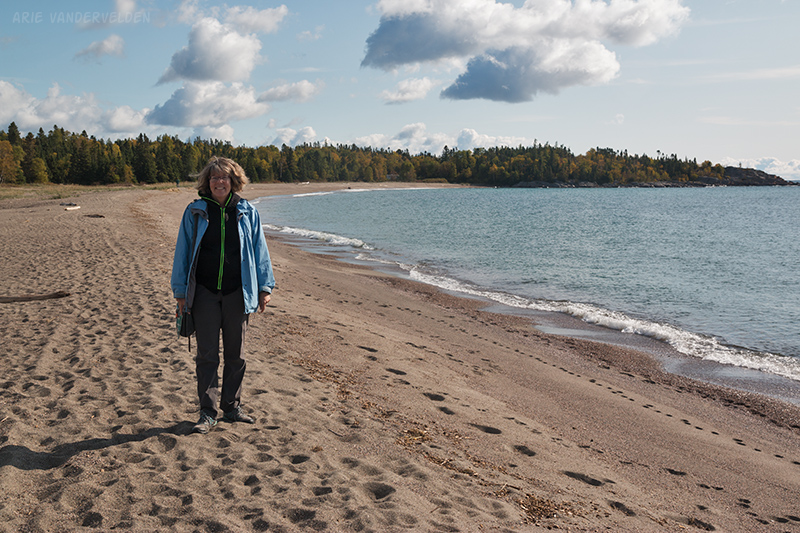 At the town of Marathon we found an overlook with a spectacular view.  Below was a cobblestone beach with logs piled on them.  Large waves, driven by a strong wind, were crashing.  Standing here I found it hard to believe I was looking at a lake, rather than an ocean.  The locals told us that there is a community of surfers here. 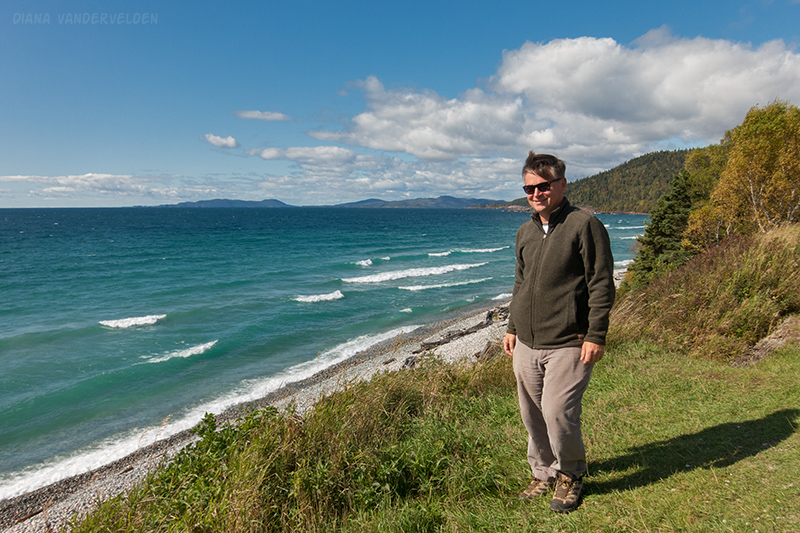 It was a bit windy for picnicking outside, so I parked the RV so that we would have a view. 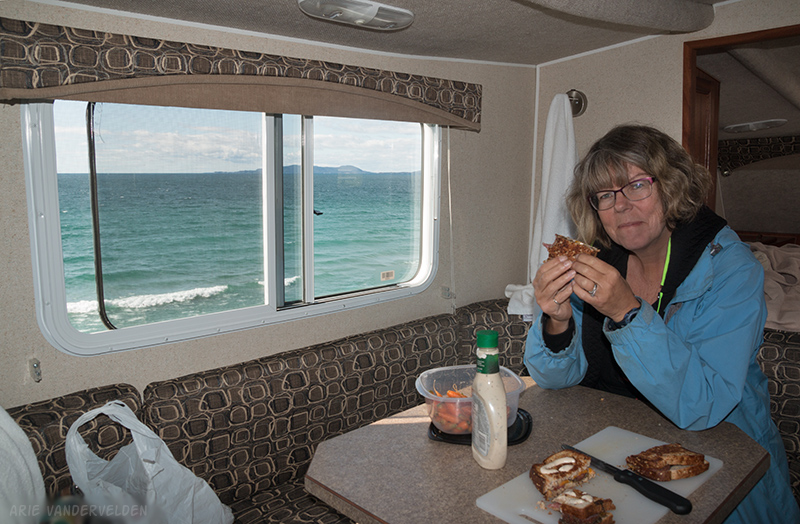 We drove on to Pukaskwa National Park, where we found a campsite in some sheltered trees.  From our campsite we could hear the roar of the surf, so we set out to investigate.  A boardwalk led to Horseshoe Bay, which had a pretty sandy beach. 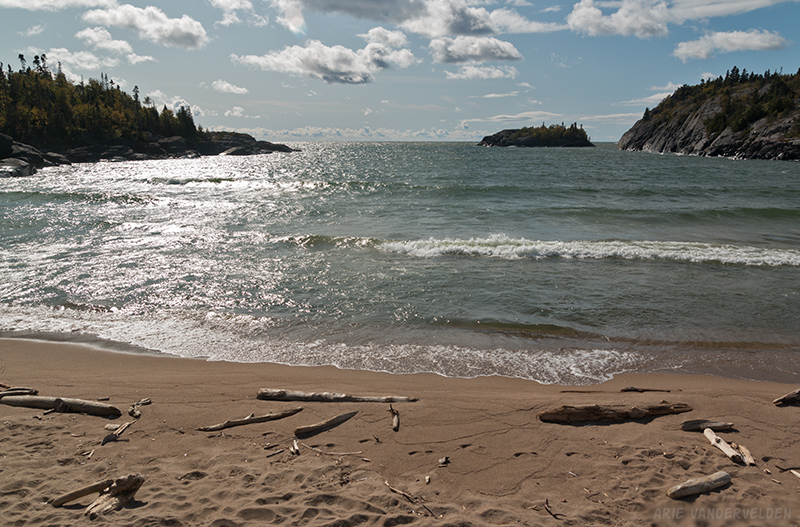 Here an easel had been set up, with a poster that showed paintings by group-of-seven artists Lawren Harris, A.Y. Jackson, and A.J. Casson.  The paintings depict scenes from this area. 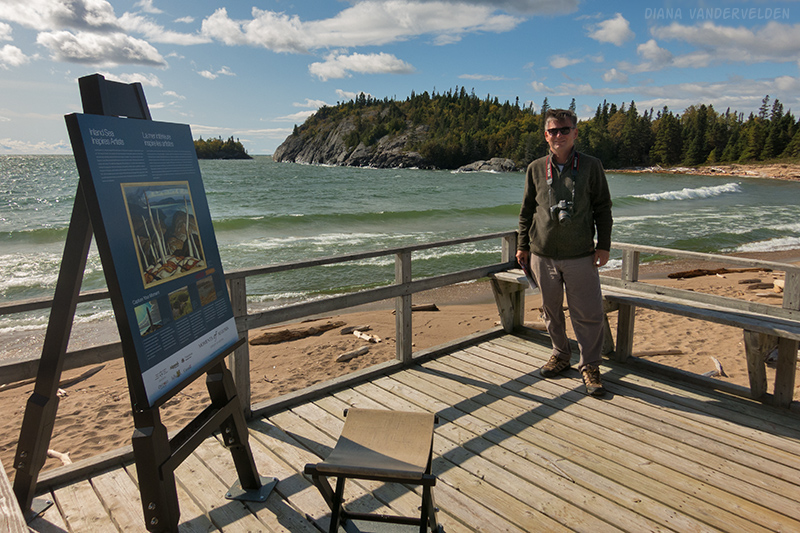 We hiked on.  Just north of Horseshoe Bay is another sandy beach with piles of logs. 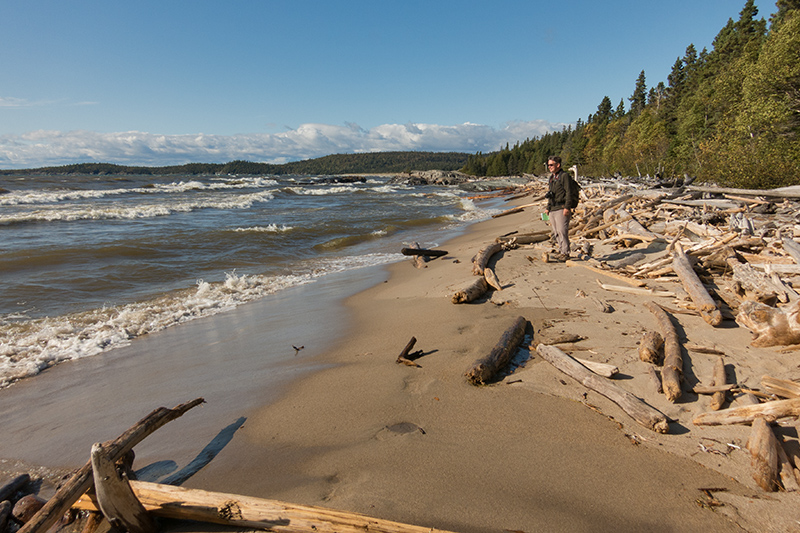 To the south there was a trail across a headland. 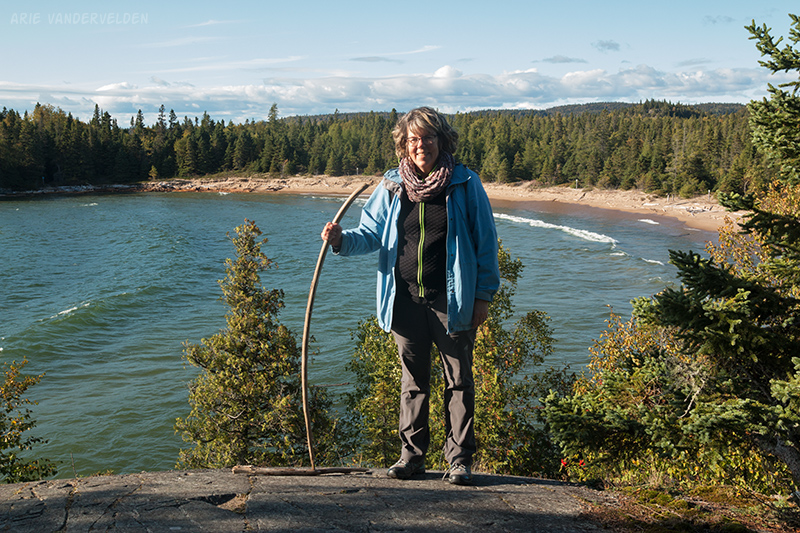 Pukaskwa National Park is a pretty spot.  The scenery oozes group-of-seven.  I am glad we visited.

The next morning we woke up to rain.  We decided to do some driving, and as we made our way to the southwest the weather got worse.  We stopped briefly at Wawa, but gusty winds and pelting rain urged us to keep going.  We ended our day at Pancake Bay, just north of Sault Ste. Marie.  By now the weather was easing up, and we were able to go for a sunset walk along the sandy shore. 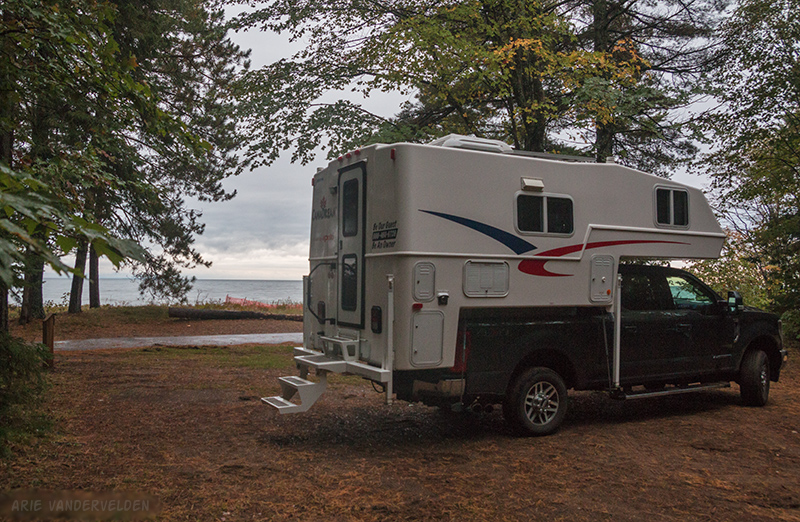 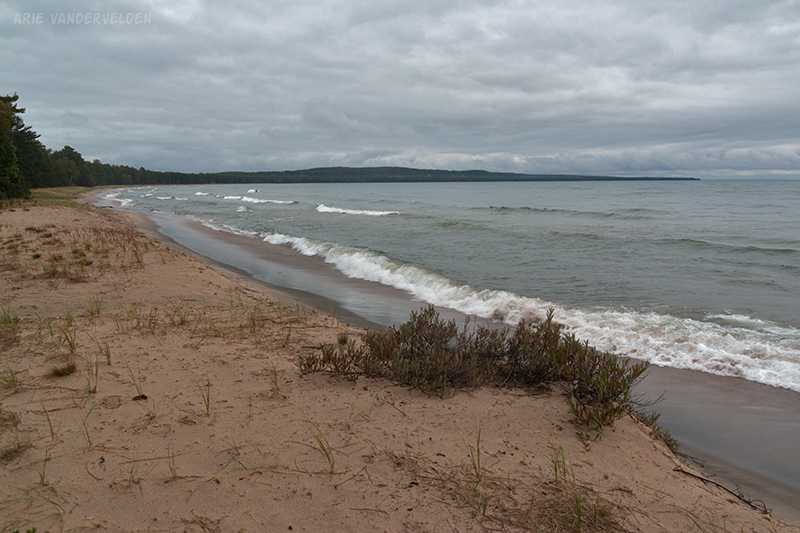 The following day we woke up to sunshine.  We drove to Sault Ste. Marie where we did some shopping, and then drove on.  We pulled over for lunch at a town called Bruce Mines.  By accident I turned off before the main exit into town, but this wrong turn led to a wonderful spot overlooking North Channel, which is essentially an arm of Lake Huron. 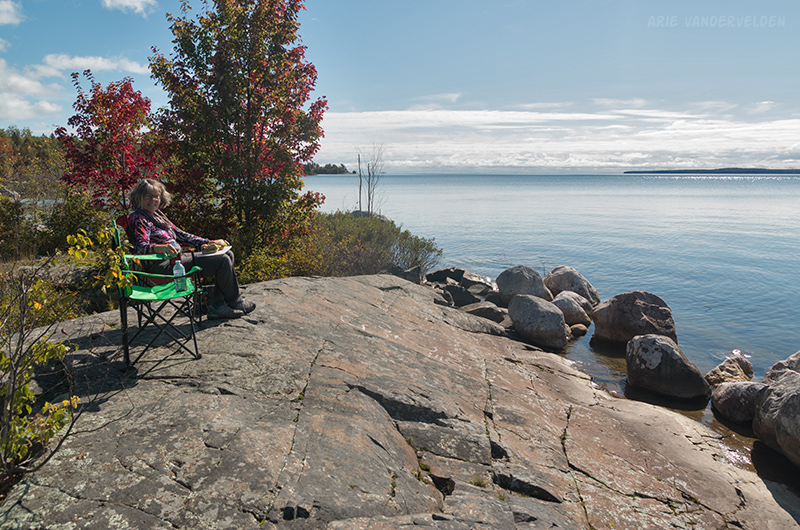 We made ourselves some sub sandwiches, and we set up the camp chairs on a granite bluff overlooking the lake. 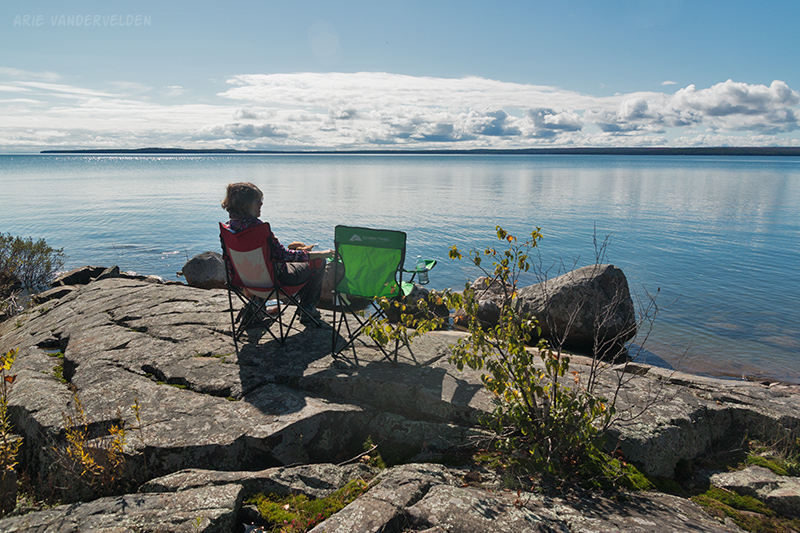 We enjoyed soaking up the sunshine.  There were some pretty fall colours here. 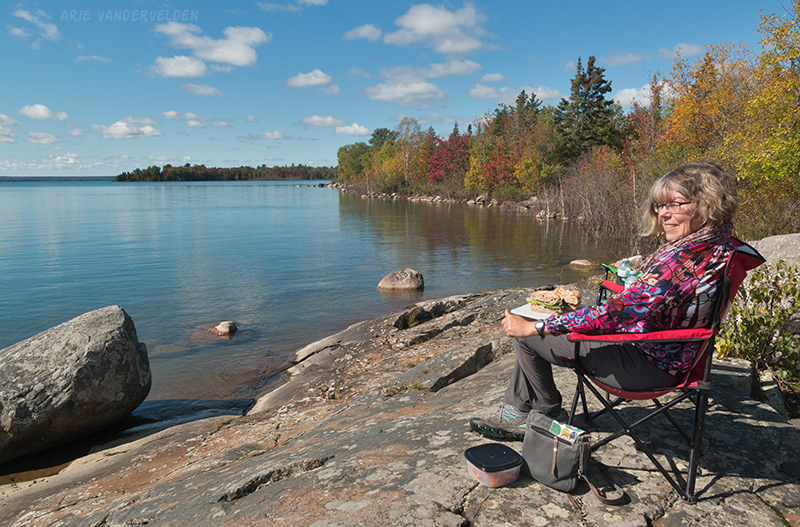 As much as I would have liked to stay here, we had to press on.  Also, we were parked at a sign that said “no camping”.  We drove past Sudbury and found a small campground at a place called Cache Bay, on the shore of Lake Nipissing.  We arrived just in time for a colourful sunset.  After sunset a vivid orange glow remained on the horizon while the sky turned a deep blue. 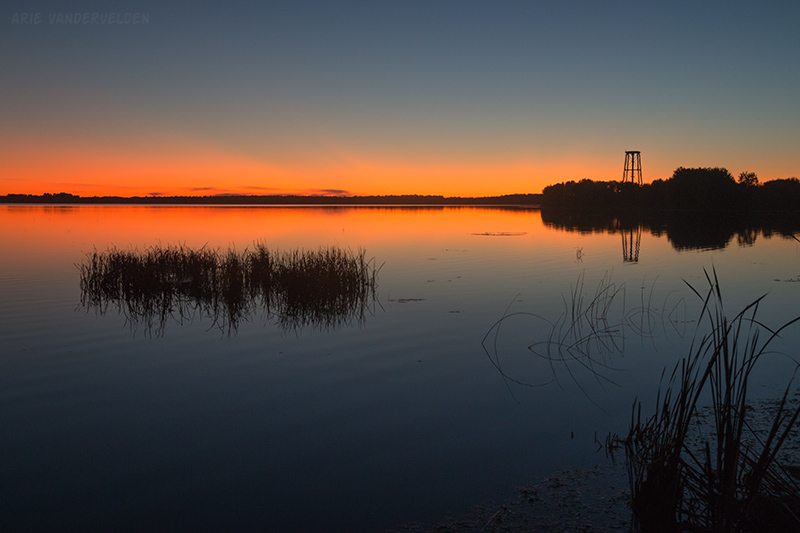 The following day we drove towards Ottawa.  We crossed the Quebec border at Portage du Fort. 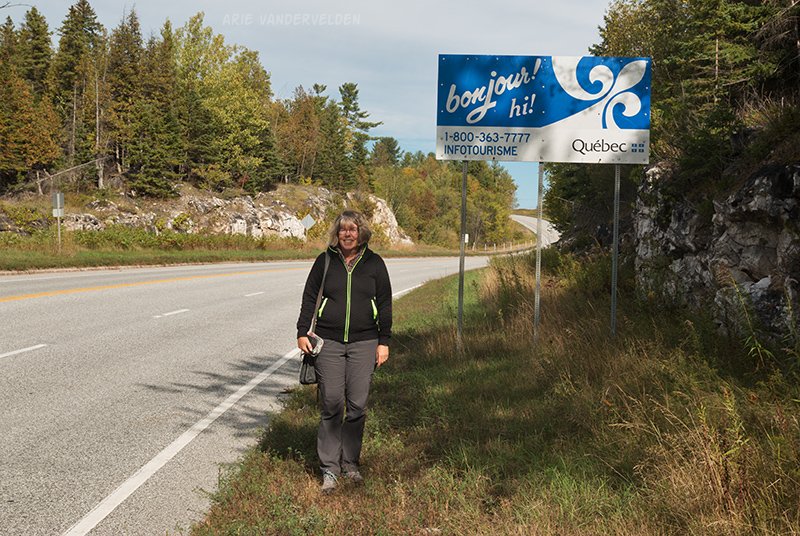 From here we drove eastwards, through Gatineau, and camped somewhere between Ottawa and Montreal.  The next morning we drove to Mirabel, dropped off the RV, and that was it.

That’s all you saw of Quebec, you ask?  Not quite.  After dropping off the RV we headed to St. Jerome to cycle the P’tit Train du Nord cycle path (part three of our journey).

In Ontario, most provincial parks close around September 15.  Just a few stay open until October 15.  All parks have a web page where the closing date is indicated.