In late September and early October we drove an RV from Calgary to Montreal.  Well, not all the way across Canada, but halfway.  We clocked 4502 km in total.

We rented an RV from Canadream.  At the end of the season they offer relocation specials: deep discounts on one-way trips towards the east.  I guess that during the summer season westward itineraries are more popular with tourists, and at the end of the season they need them back east.  Diana and I had talked previously about driving across Canada, and RVing sounded like a fun thing to do. 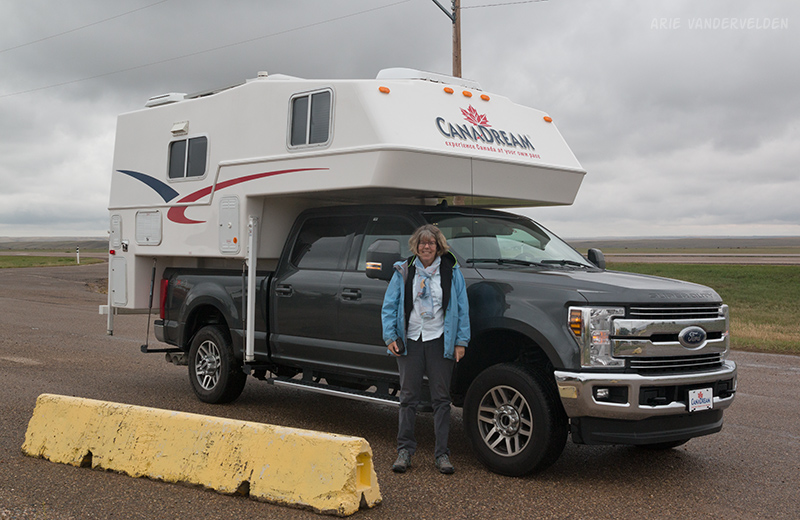 The Canadream location is just north of the Calgary airport.  The earliest we could schedule a pickup was 3 pm.  By the time the orientation was done it was 5 pm, and by the time we drove it back home, loaded it up with groceries and our luggage, and got on the road it was 6:30 pm.  It was dark by the time we reached Emerson Bridge, a campsite north of Brooks.  Sadly the campground was closed.  We found a place to camp in the nearby village of Duchess.

The next day it was pouring rain.  We drove to Medicine Hat and them on to the Saskatchewan border.  So, no pictures from Alberta….  So I will use two photos I shot earlier this summer. 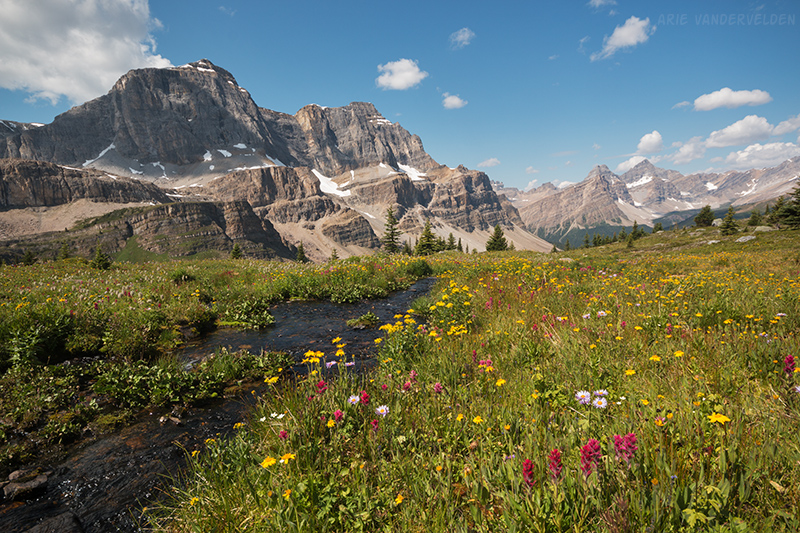 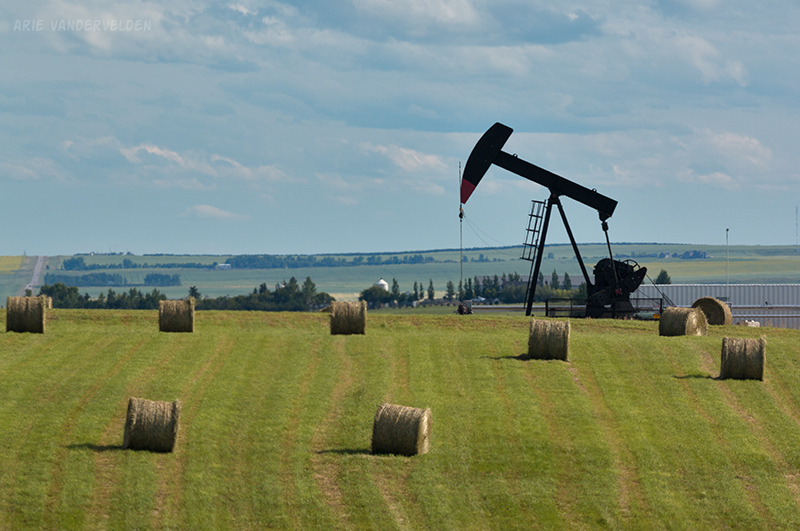 Some people say Saskatchewan is boring.  They say it’s flat, monotonous, and that there is nothing to see.  These people are wrong.  Saskatchewan is beautiful: there are rolling hills, skies that go on forever, pretty farming towns with old-fashioned grain elevators, and old homesteads with peeling paint.  Saskatchewan is a photographer’s paradise, and this province holds a special place in my heart.

We crossed into Saskatchewan along the trans-Canada highway. 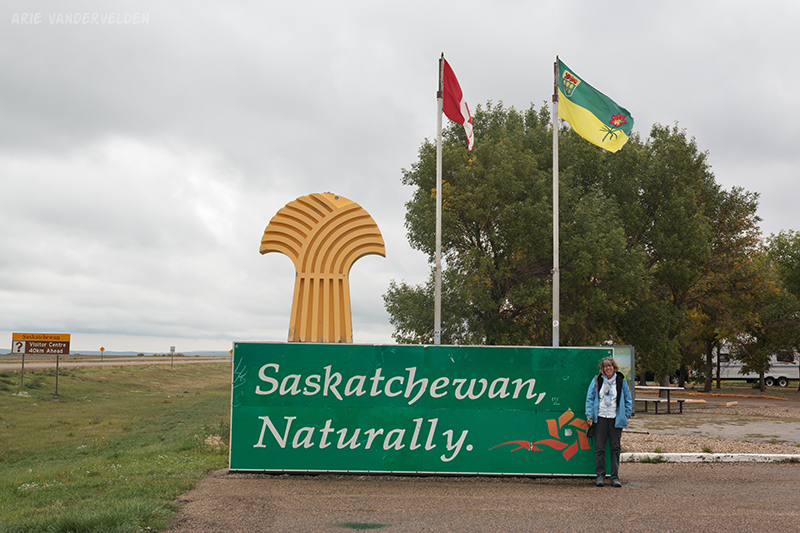 It didn’t take long to find some interesting photography subjects: a colourful Ford truck with a CPR emblem on its door, and an old threshing machine. 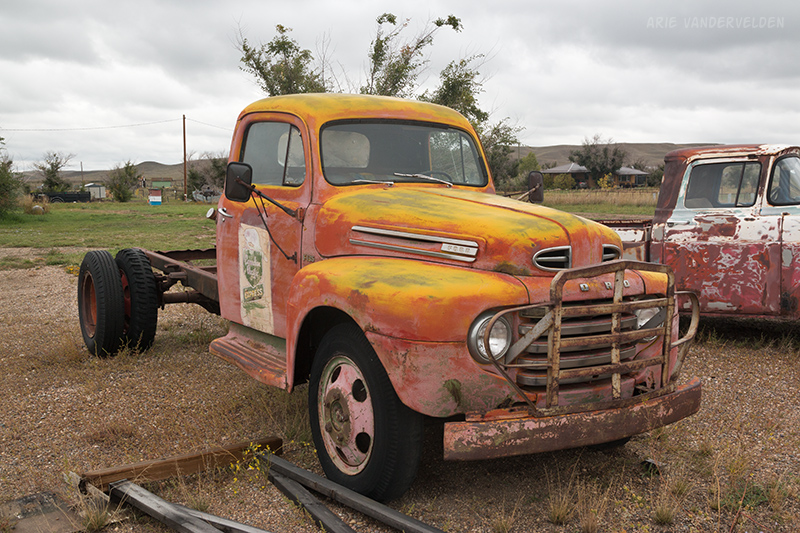 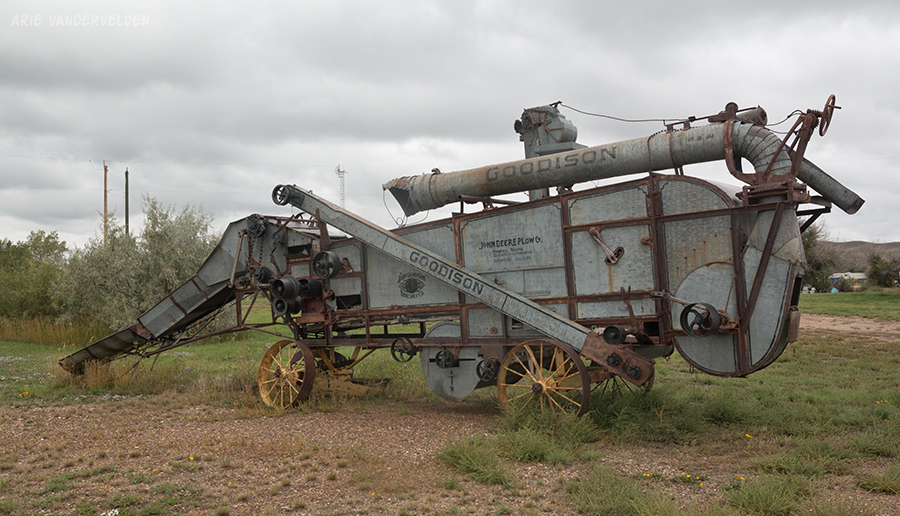 We turned south at Gull Lake, and east again on highway 13.  I thought a low-numbered road like this would be in good shape, but it’s a narrow and bumpy road.  By now it had stopped raining and the skies were starting to clear.  We stopped to take photos of grain elevators. 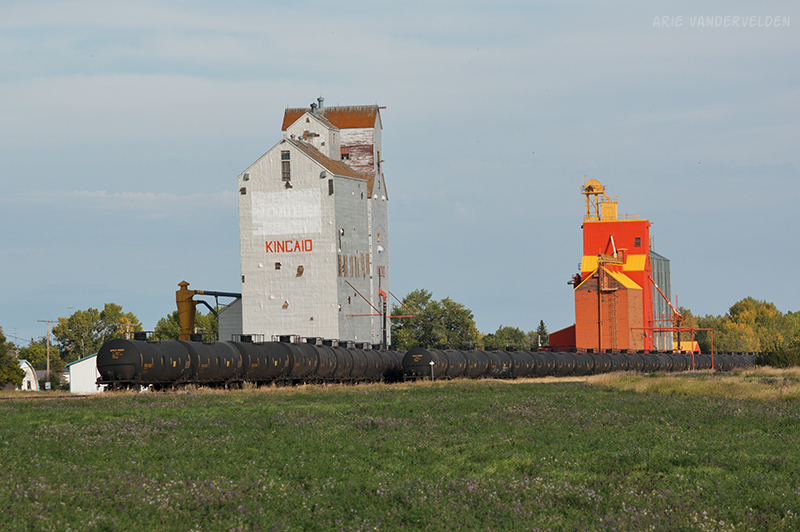 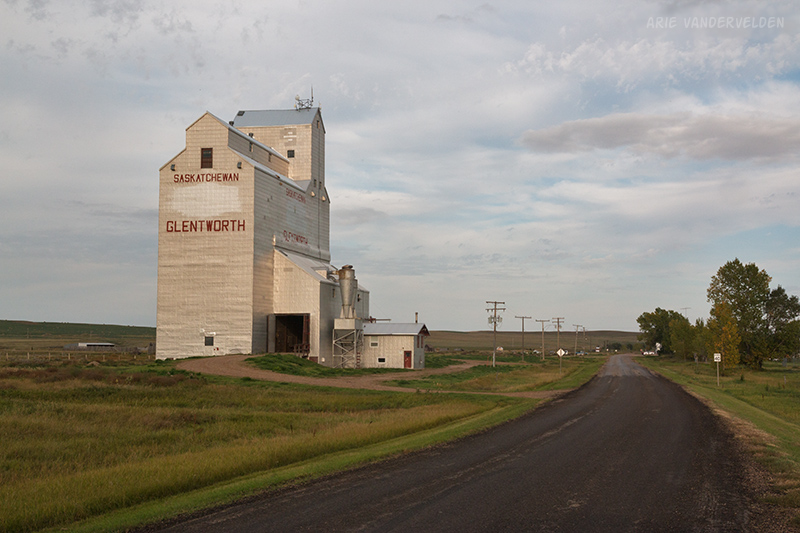 There were some pretty abandoned farmhouses. 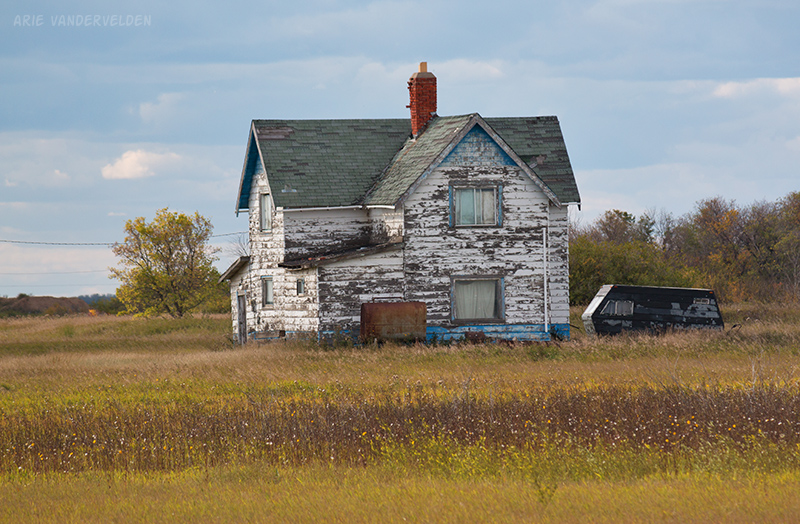 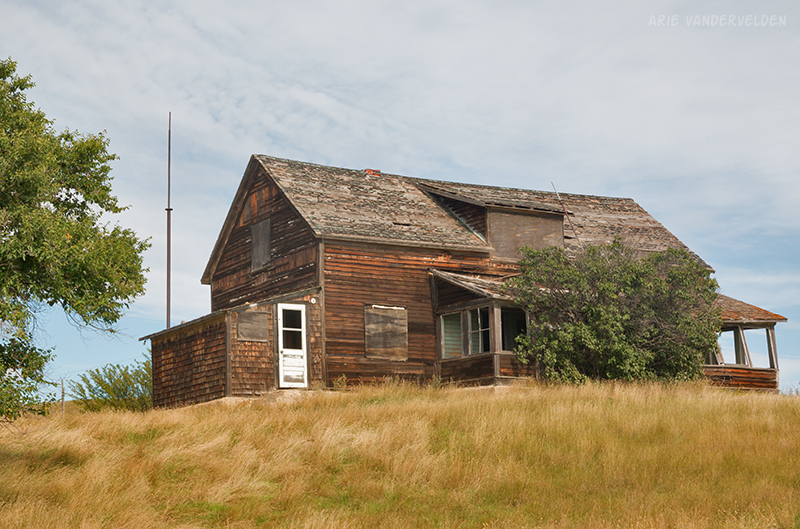 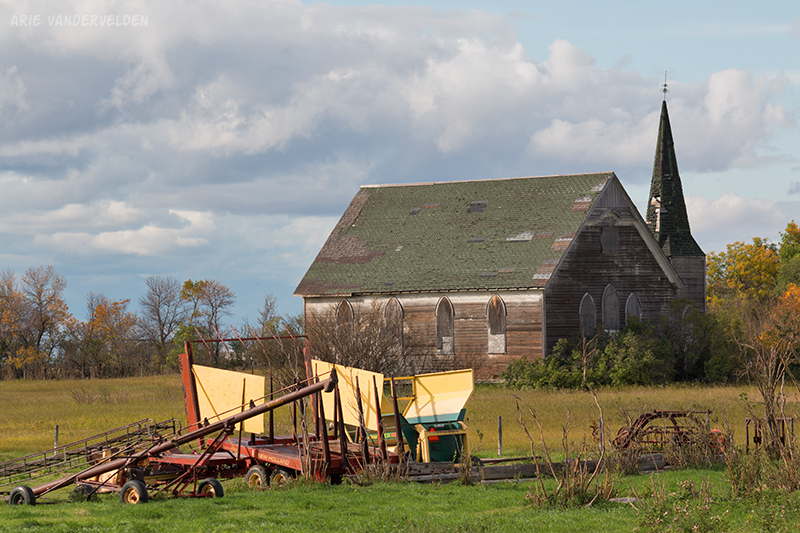 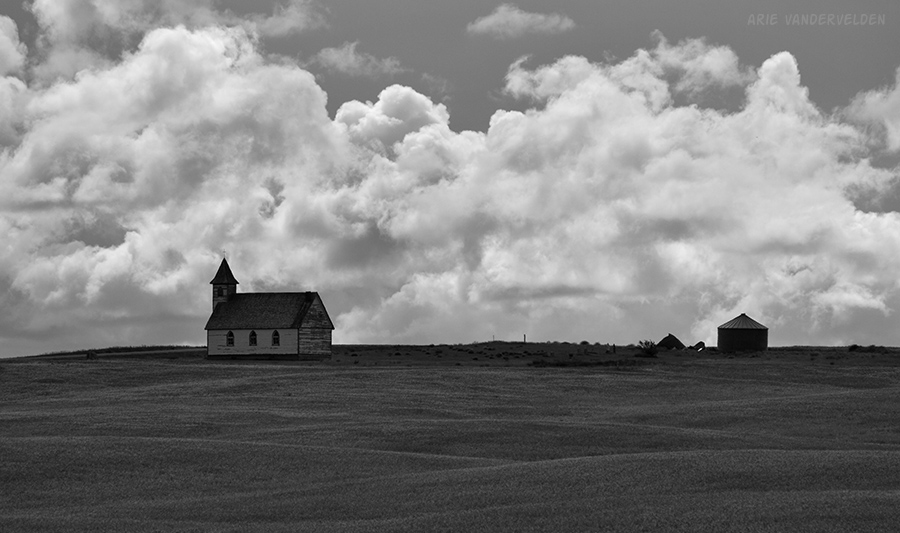 We were headed for Grasslands National Park east block, which is farther away than we thought it would be.  Late in the afternoon we thought we were pretty close, and then we saw a little sign indicating: Grasslands – 97 km.  We were glad we fueled the truck before leaving the Trans-Canada highway because there are very few services in this part of Saskatchewan.  We got there just before sunset. 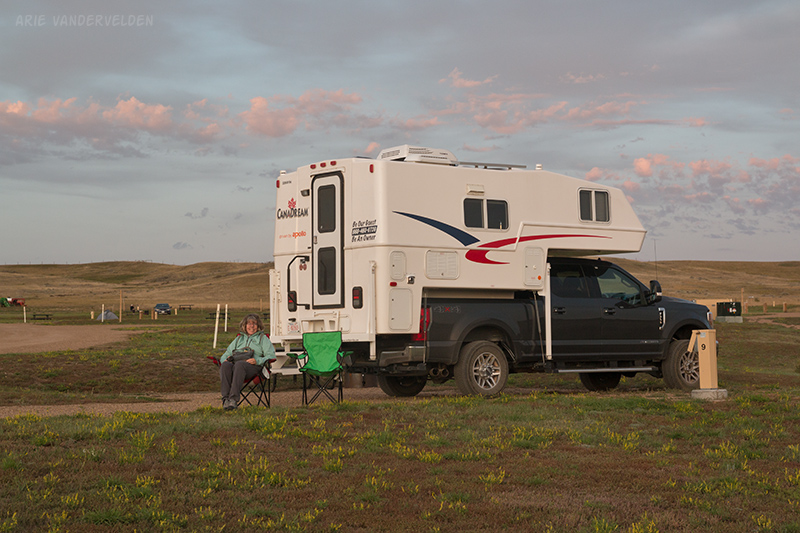 We had a nice view from our site. 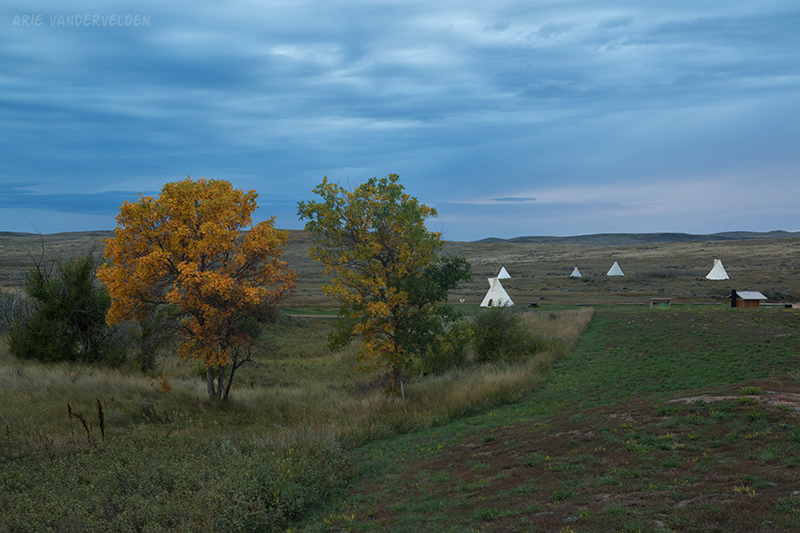 There were some tipis set up in a meadow. 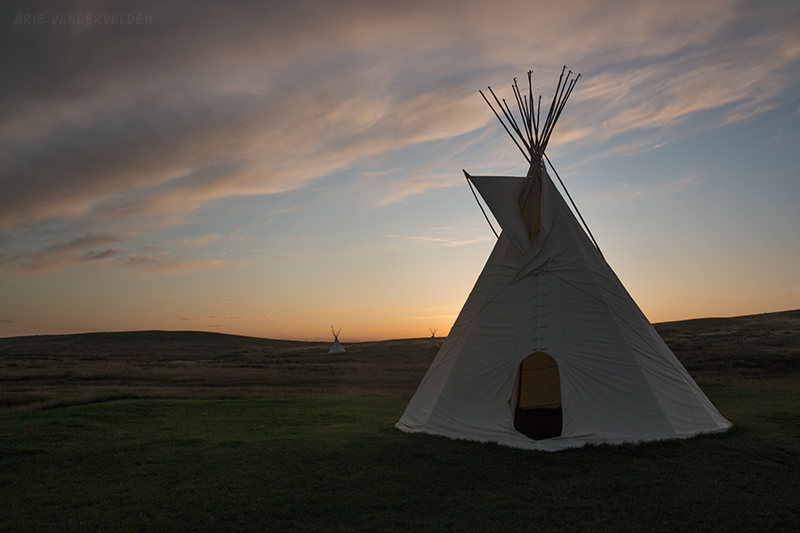 Grasslands is a national park, but it isn’t Banff.  Grasslands gets about 18,000 visitors per year and most of them go to the west block.  For comparison, more than four million people visited Banff last year.

The next morning we visited the small ranger station and chatted with the ranger on duty.  She gave us some maps, lent us some hiking poles, and pointed us in the direction of a hike called “Valley of 1000 Devils”.  Parks Canada rates this hike as being “very difficult” but in reality it’s an easy stroll. 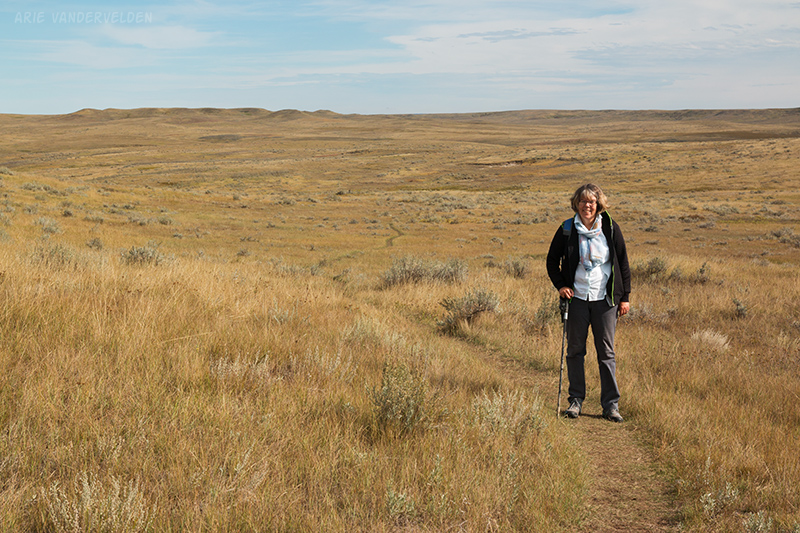 This 6 km (one way) hike starts by crossing – you guessed it – grasslands.  There is grass as far as the eye can see in all directions.  And the eye can see for a long ways out here.  There are no trees, no barbed-wire fences, no cows, no roads, no gas wells and compressor stations and pipelines.  Just grass and a few small shrubs.

It was a nice sunny morning.  The crickets were chirping, announcing the last few precious days of summer.  After an hour or two of walking I noticed something else: no noise from airplanes.  Grasslands National Park must not be on a major flight path.

Badlands begin to appear about halfway along the hike. 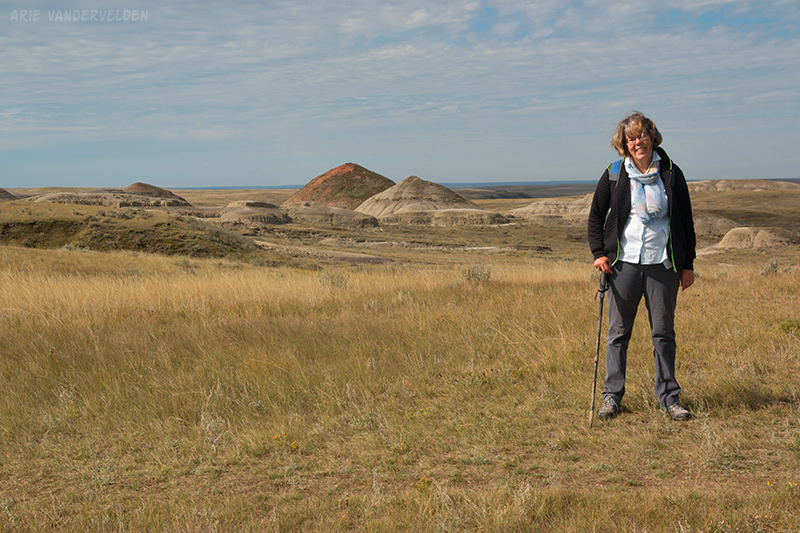 The hike ends at a bluff overlooking an area of badlands. 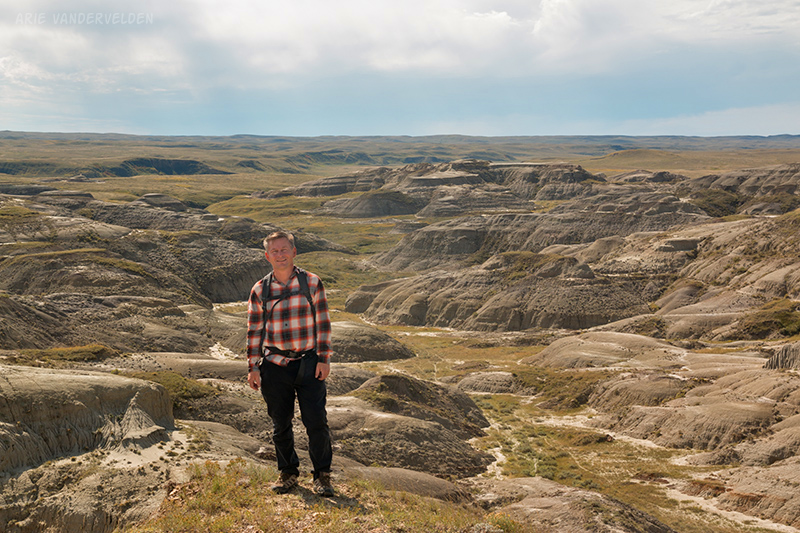 Just below this bluff is an exposure of the K-T boundary: the end of the Mesozoic era and the beginning of the Cenozoic era.  This boundary marks the extinction of the non-avian dinosaurs.  In the photo below it’s black coals. 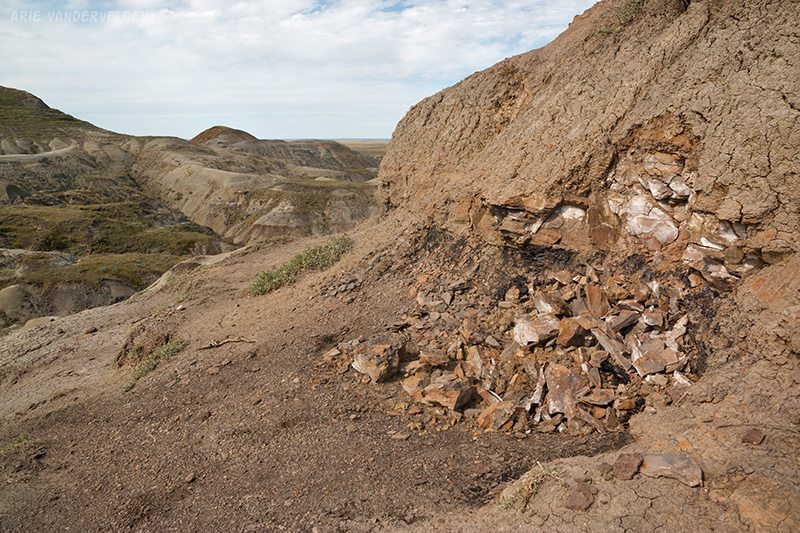 We hiked to the bottom of the canyon where we had a snack and looked for dinosaur fossils (lots of small fragments).  We then hiked back the way we came.  In Grasslands East Block is a scenic drive that has some nice viewpoints of the badlands we visited earlier.  There were some nice fall colours as well. 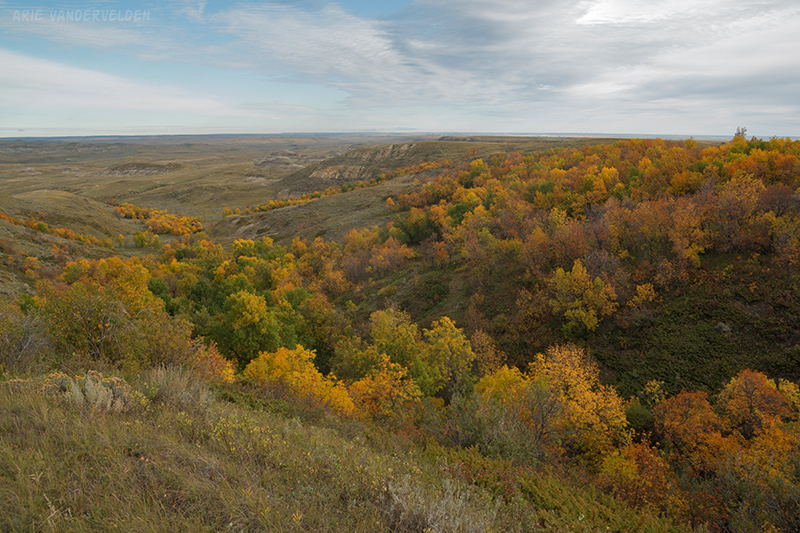 The road ended at a viewpoint with two Adirondack chairs.  We sat and contemplated the view.  The Earth really is round – you can see the curvature from here. 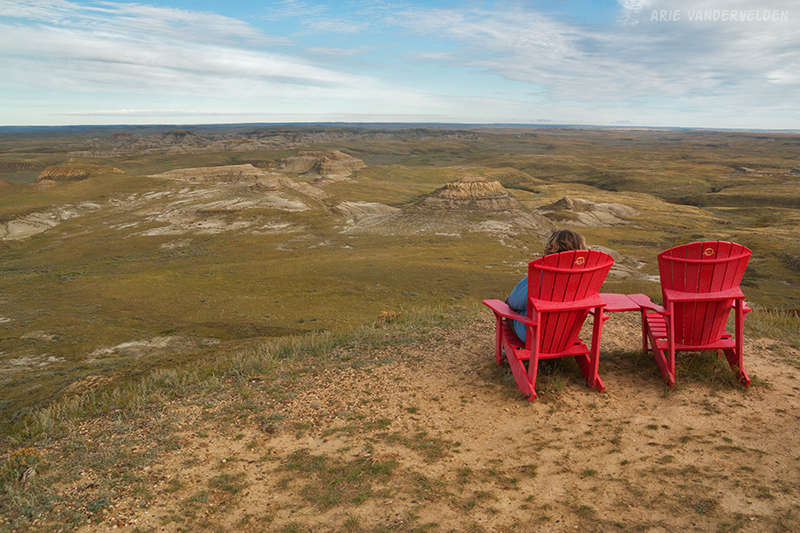 The next day it was time to go.  We had more driving to do. 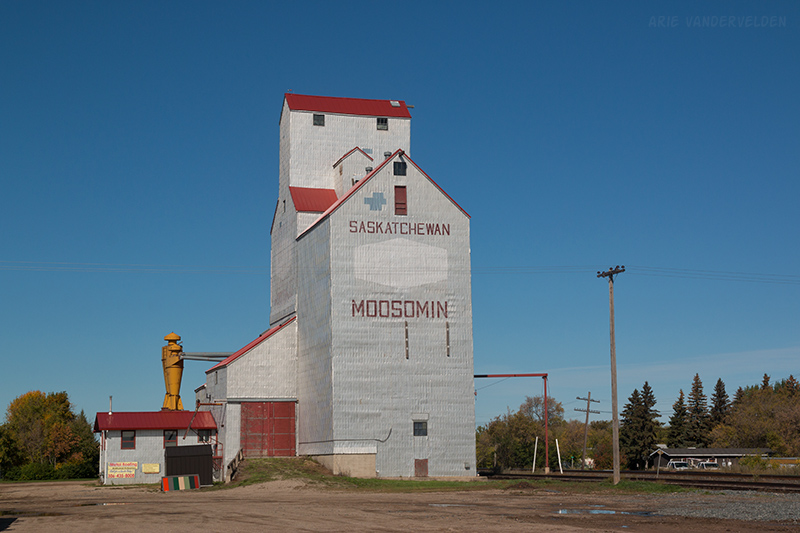 East of Weyburn we started seeing pumpjacks all around us.  Hundreds of them.  It went on for miles and miles.  I’m pretty sure it’s the Bakken Formation that’s being produced here. 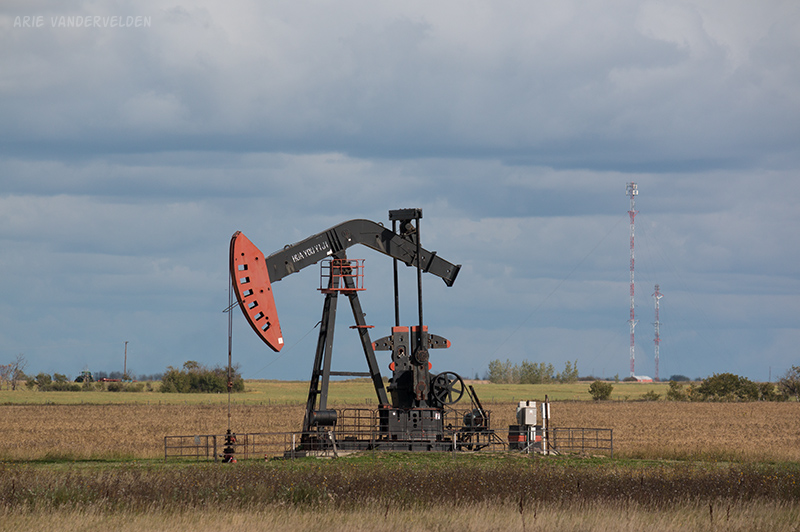 Our third night in Saskatchewan was spent at Kenosee Lake, near the Manitoba border.  Diana’s family had some friends who used to vacation here in the past.  It’s a pretty spot. 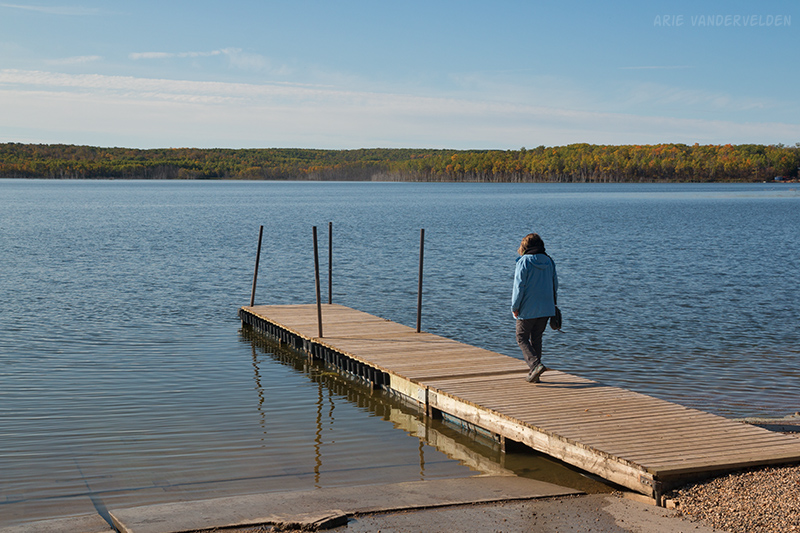 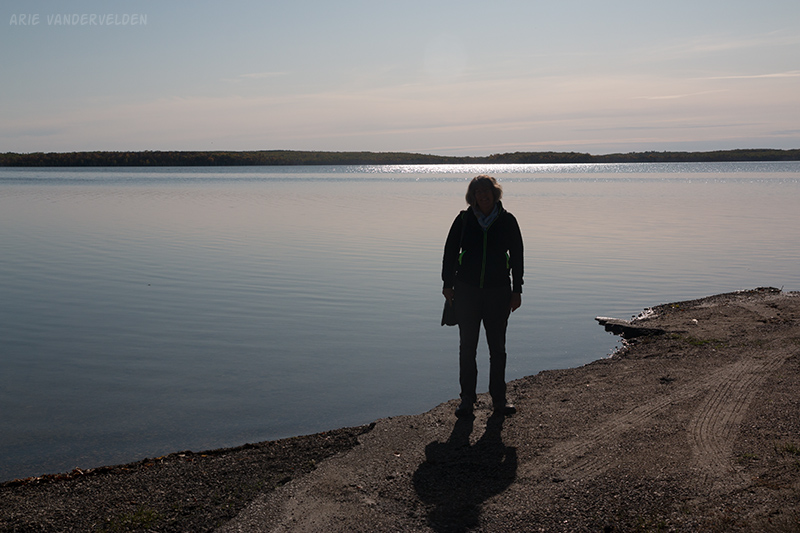 The water was still of swimmable temperature and I would have liked to stay here longer.  But our time with the camper was limited and we had to press on.  Manitoba here we come! 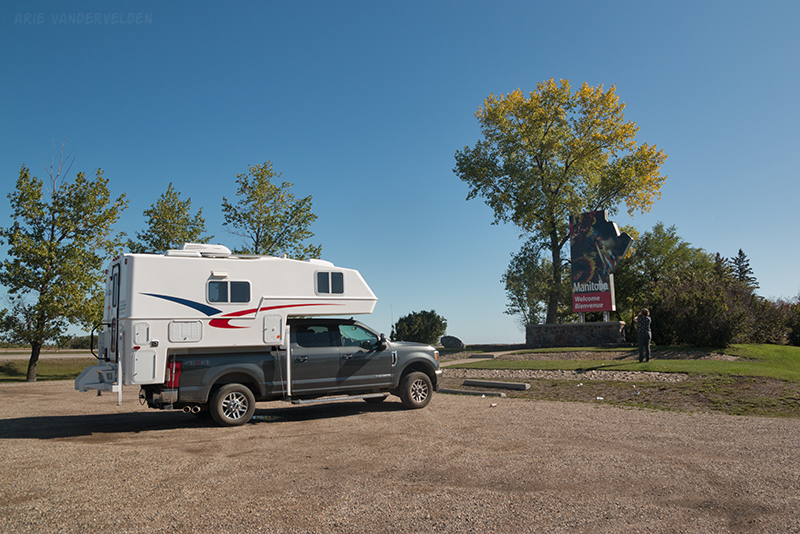 We only stayed one night in Manitoba.  We went to Grand Beach, on the shores of Lake Winnipeg.  We got there just in time for sunset. 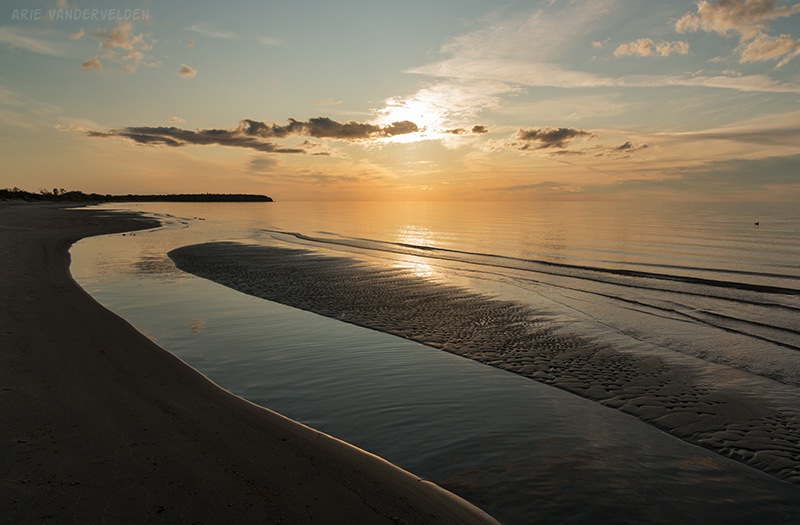 Lake Winnipeg is stupendously big.  Grand Beach is near the very southern tip of the lake, where it is narrow, and even here we could not see the opposite shore.  Grand Beach is essentially a barrier island with a lagoon behind it, and these are geographical features you usually find at the edge of oceans.

There was a pretty reflection in the lagoon. 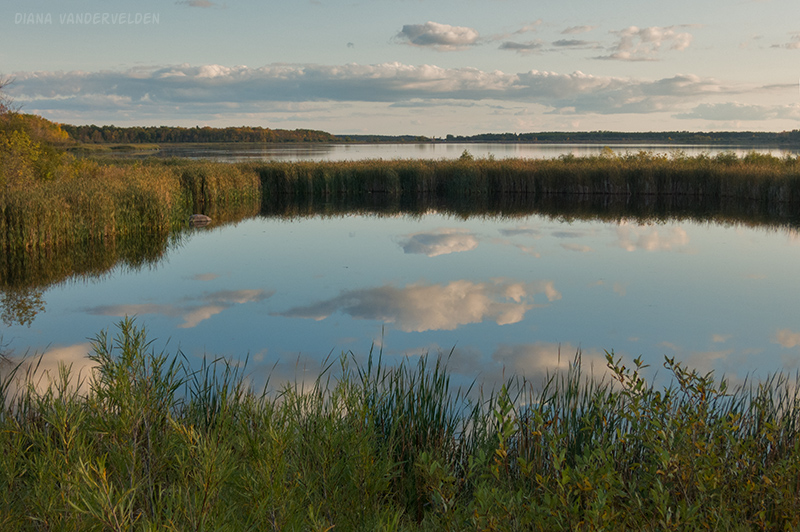 We returned the next morning for a beach walk. 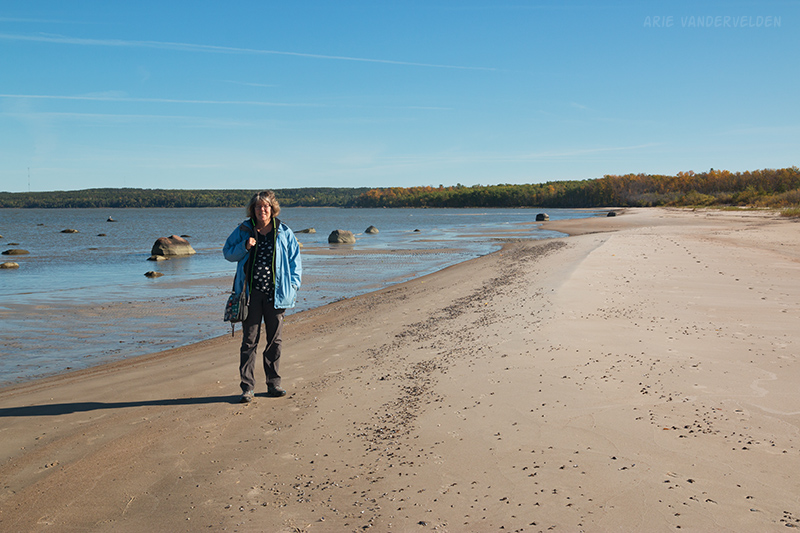 After our beach walk it was time to go on.  Ontario is next.  And Ontario is really, really big.  Read part two of our camping trip here.

As mentioned we rented a camper from Canadream.  The truck was virtually new and had all the mod-cons you can think of.  The camper was also brand new.

We should have checked campground closing dates.  A lot of campgrounds close after labour day even though there typically is plenty of fine weather in September and October.  Summer doesn’t end until September 21st.  So what’s up with that?

The first night we had planned to stay at Emerson Bridge, but it was closed.  We ended up staying in the village of Duchess on a lot between the store and the cardlock fuelling station, which was fine.  I have been to Emerson Bridge before and it’s a pleasant campground.

The second and third nights we stayed at Grasslands National Park East Block.  I really like Grasslands and I hope to spend more time here in the future.  It’s a beautiful place, rates are reasonable, the staff is friendly, and no hassles with closures.  Highly recommended.

The fourth night we spent at Kenosee Lake.  There is a nice provincial campground there.  We spent our time picking a nice site.  After we got set up we went for a walk trying to find a registration box.  We finally came upon a cryptic note near the entrance explaining that after labour day the campground was open to long-stay residents only, and that overnighters should camp at a campground across the road.  So we had to pack up and move.  Other than the hassle due to poor signage, I do recommend this campground.

The fifth night we spent at Grand Beach.  There is a beautiful provincial campground, but there was a small sign saying it was closed, even though nothing was roped off.  After some searching we ended up at nearby “Grand Palms Beach Resort”, which neither had palms nor beach access.  Sites here are small, and you better have your own toilet because urinals lay scattered about in the mud, a result of unfinished facilities.  They charged us more than $50 (the ‘suckers who didn’t know the provincial campground is closed’ rate).  Not recommended.