Our drive across Canada took us to Mirabel, Quebec, where we dropped off our Canadream RV at their depot.  Mirabel is just a few kilometers away from Saint-Jérôme, staging area for the P’tit Train du Nord cycle path which we did last year and very much enjoyed.  So we decided to spend a few extra days to cycle the path again.  Last year we were a little bit early for fall colours, but this time we were there pretty much right at peak colour.  We enjoyed the cycling just as much the second time around.

The trip begins by taking a van from Saint-Jérôme to Mont-Laurier.  It was a drizzly day, but otherwise fine cycling weather.  Saint-Jérôme is at the 0 km marker, and Mont-Laurier is at the 201 km marker.  There are distance signs every kilometer, so you count down as you go along. 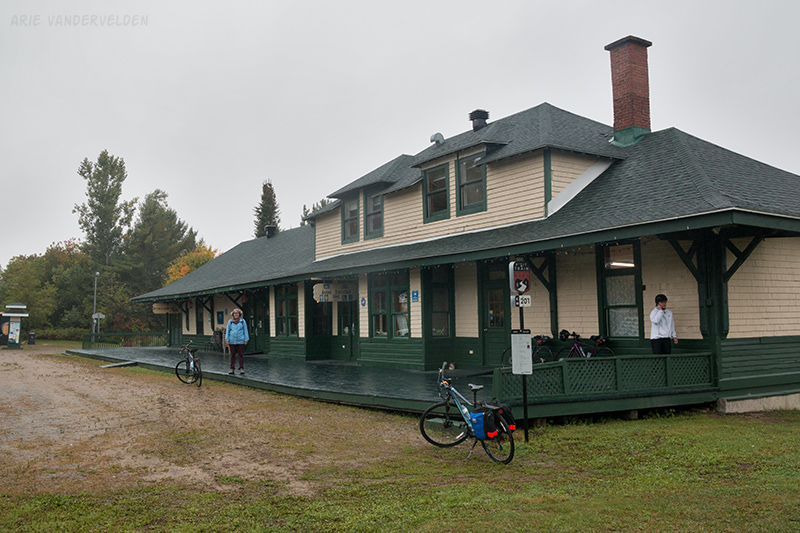 Outside of Mont-Laurier the trail passes Lac des Ecorces, a large lake. 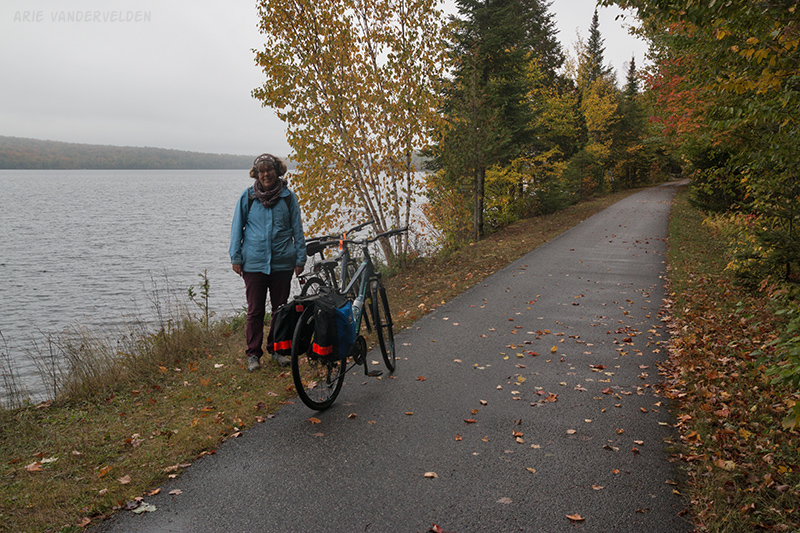 Here is Diana cycling across an old trestle. 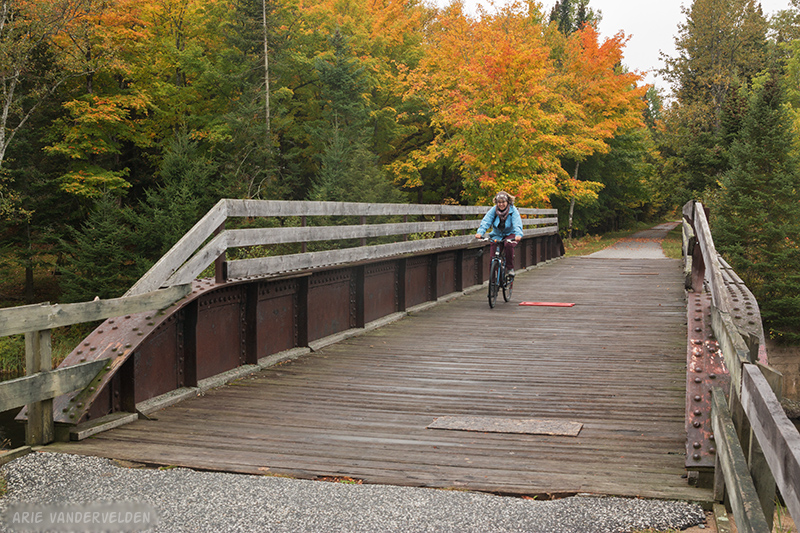 We passed green conifers, yellow birches, and maples that ranged in colour from green to yellow to orange to burnt-orange to deep red to deep purplish red.  Just to the right of Diana are some colourful sumac leaves.

On this trip I developed an appreciation for sumac.  The leaves are very colourful. 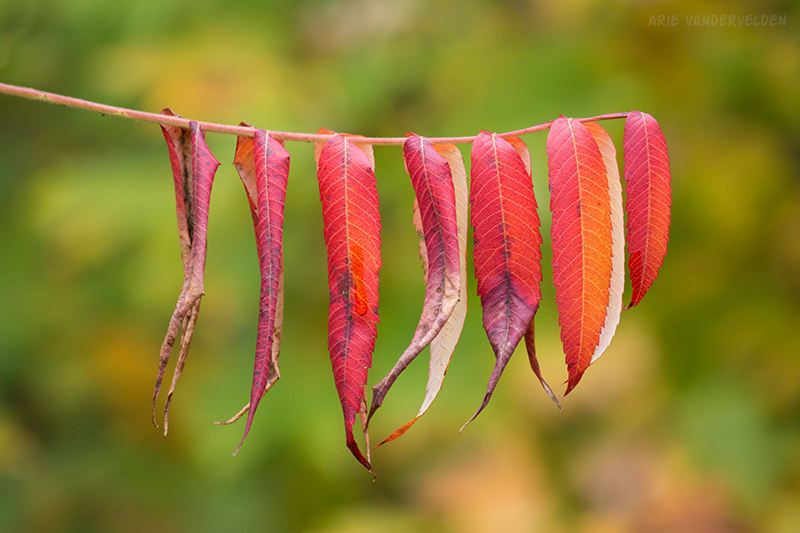 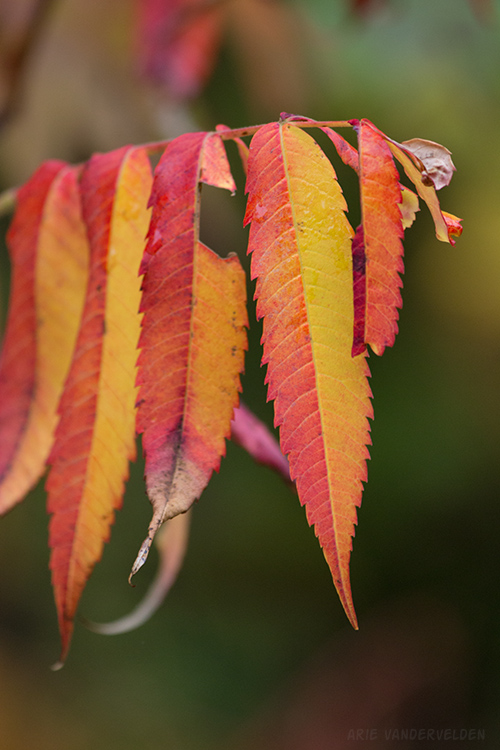 We stopped at a wetland where there was a caboose-shaped shelter. 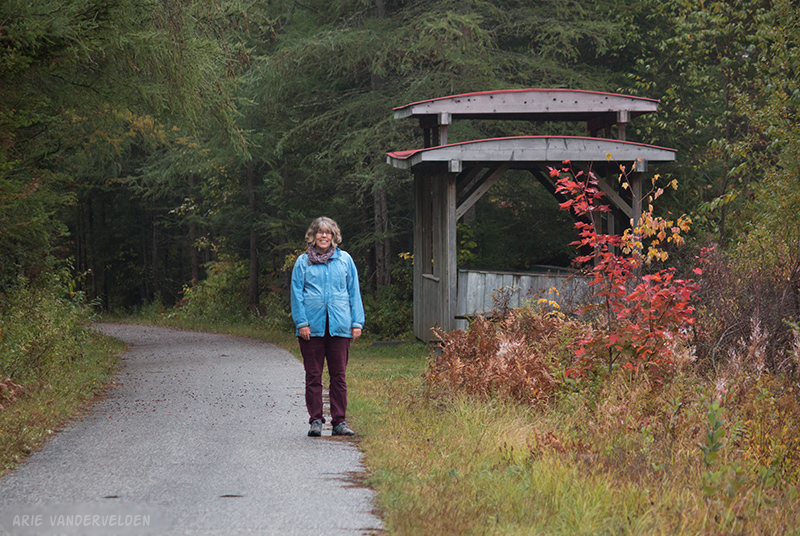 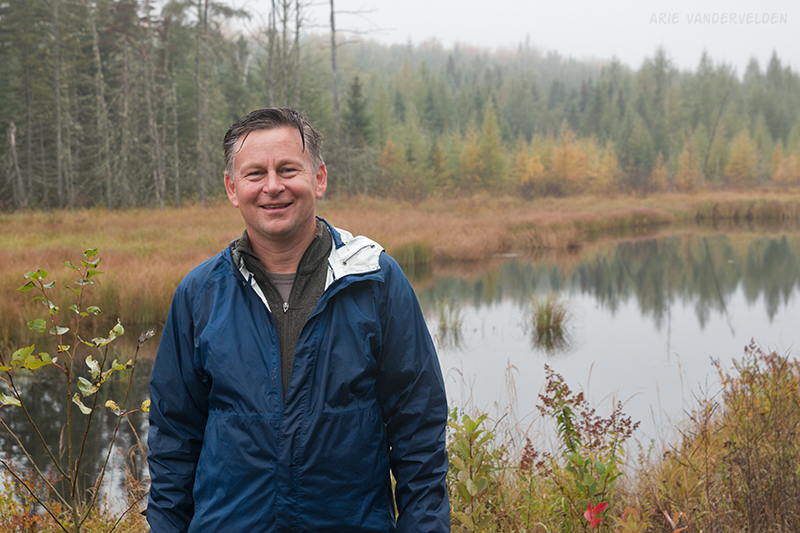 We ended our day at Lac Saugay, and stayed at Motel Ours Bleu.  The lake was enshrouded in fog.  I knew from last year that the motel has kayaks for guests to use so I went for a paddle. 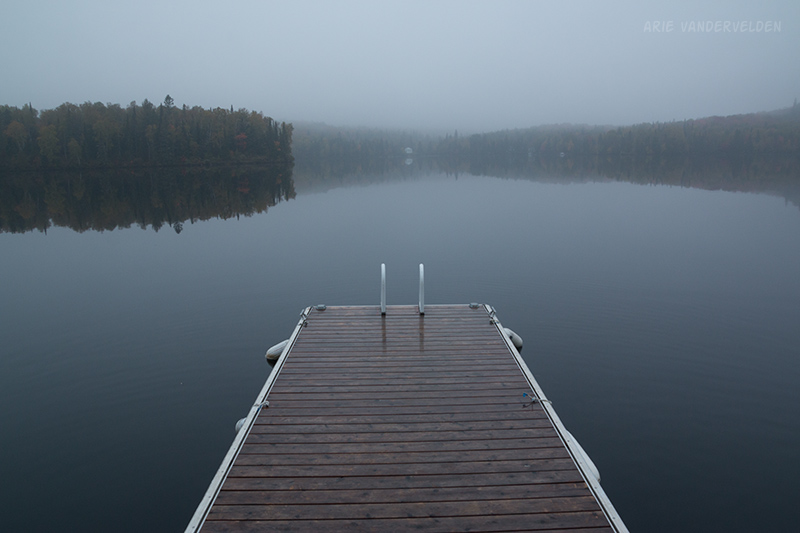 The lake was like a mirror, and the flat, low light made it quite surreal. 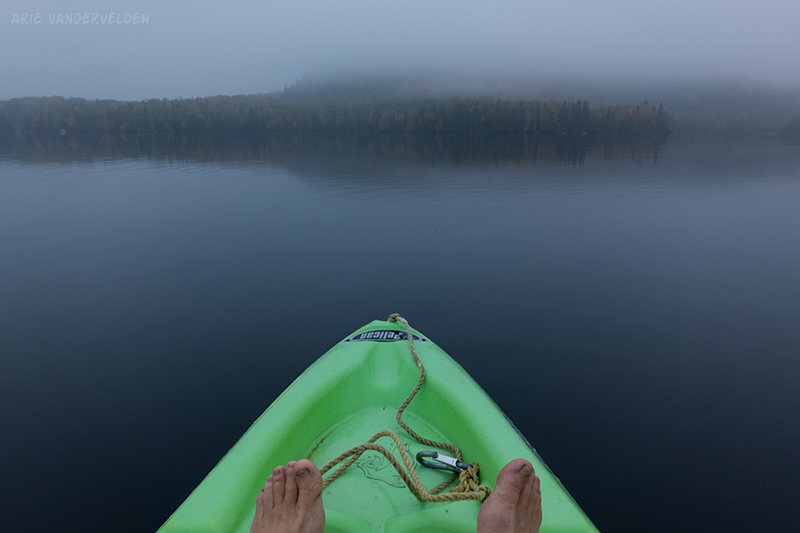 The next morning was clear, cold, and breezy, the exact opposite of the previous day.  This time the lake was a bit choppy, but I could see the fall colours on the surrounding hillsides. 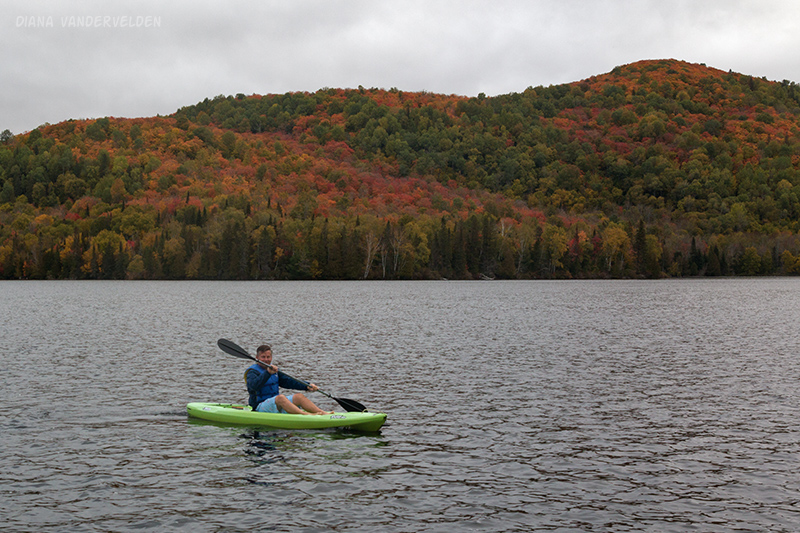 I went for a short paddle around the lake.  When I got back my feet were frozen, and they stung when I ran hot water on them. 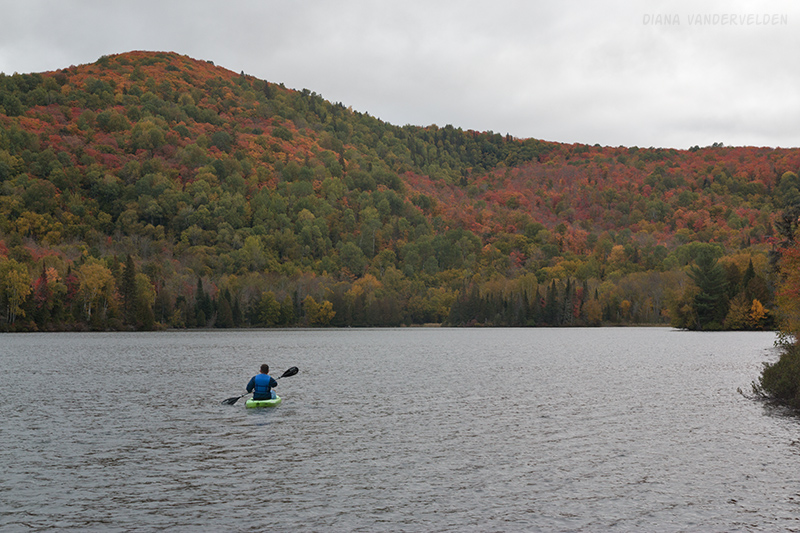 It was a cold day, but we were dressed for it.  The fall colours were spectacular. 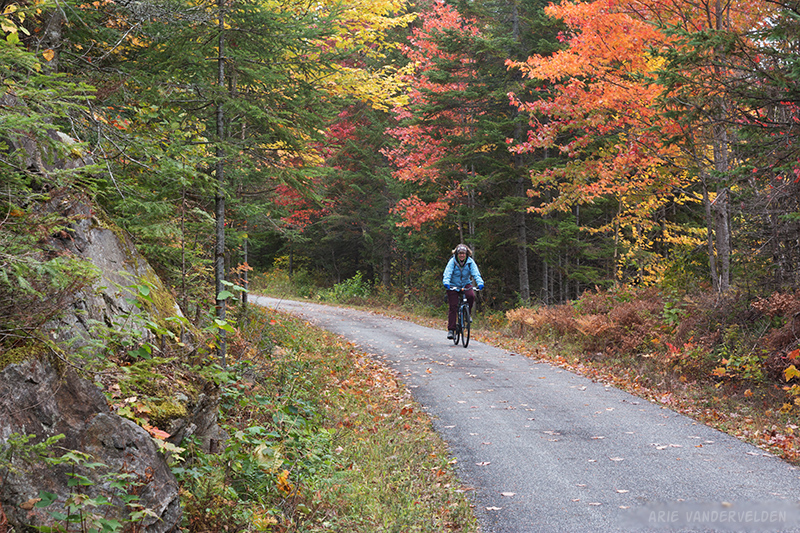 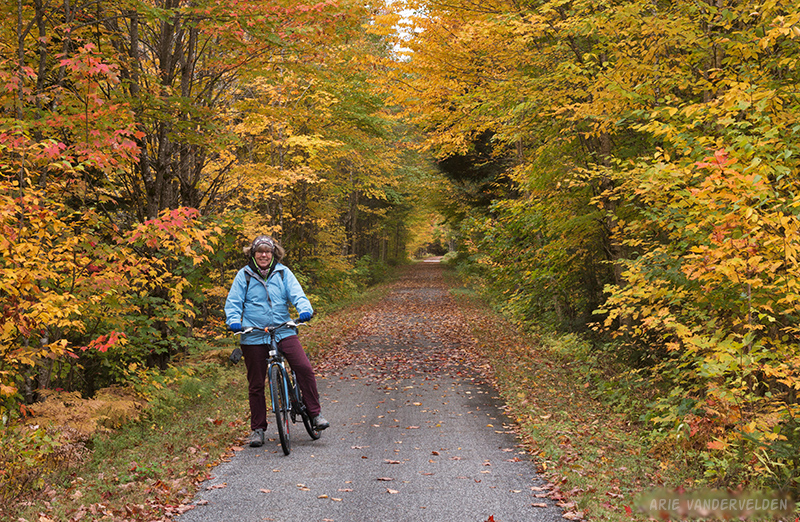 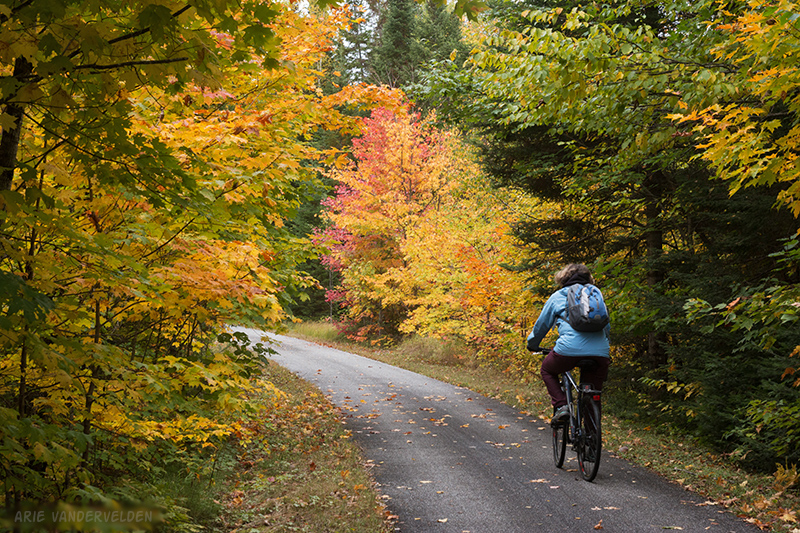 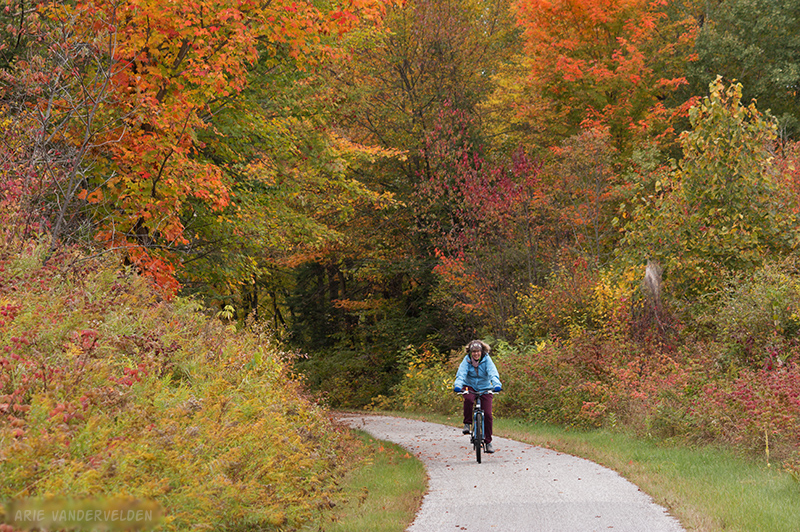 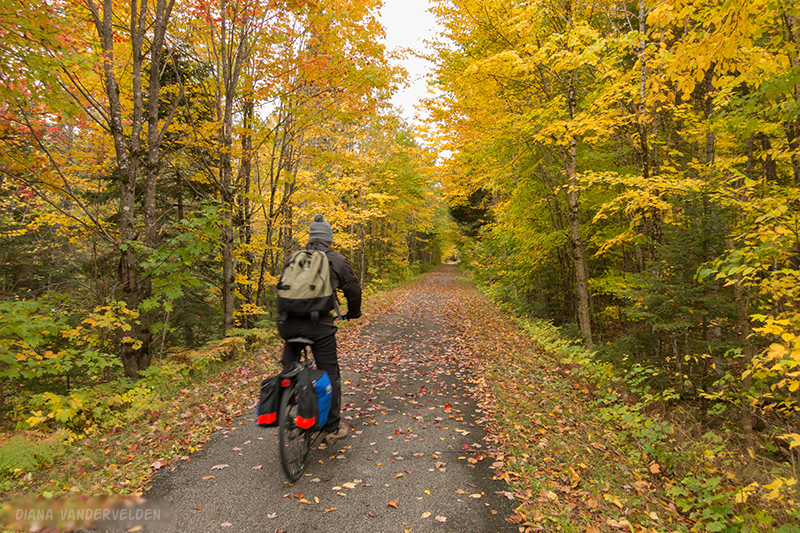 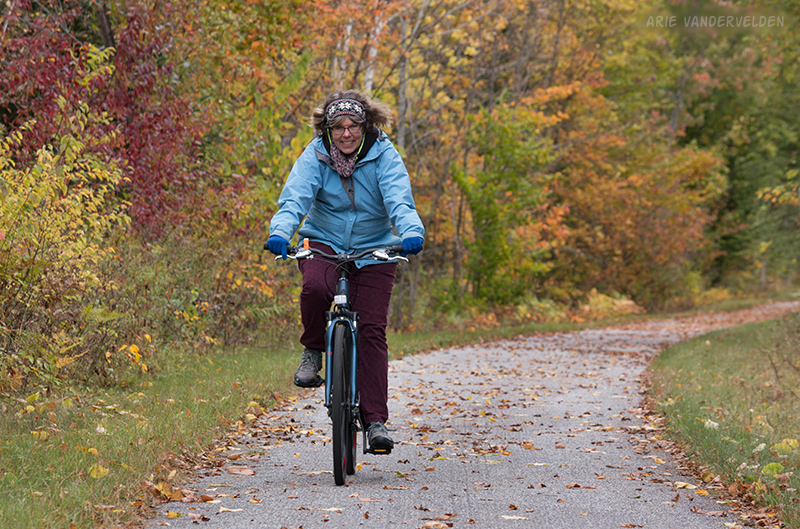 Along the northern half of the P’tit Train du Nord are interpretive signs.  They are in French only, but we could figure out most of it. 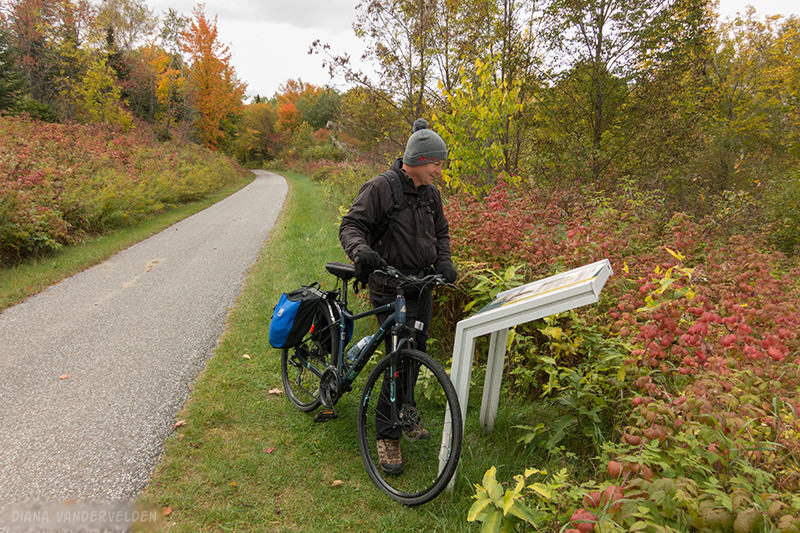 We passed the 100 km marker, the halfway point.  Time for a selfie. 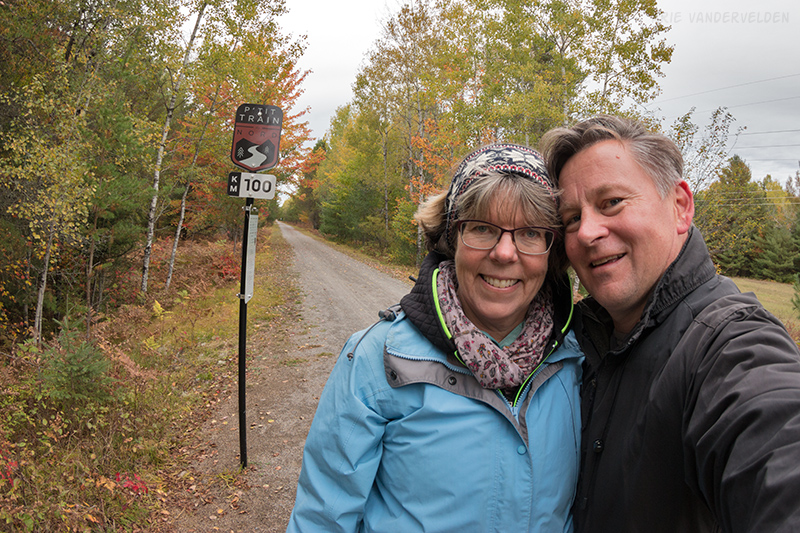 Near Mont-Tremblant the colours were explosive.  The locals told us this was an exceptionally good year for fall colours. 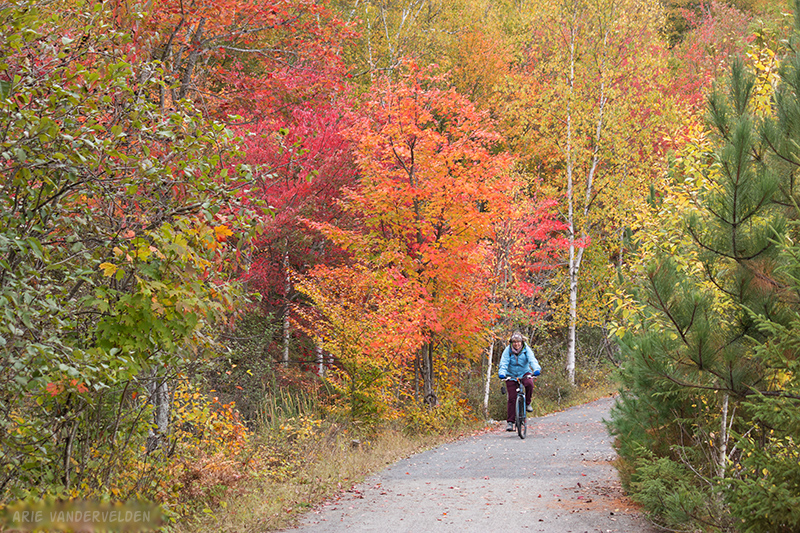 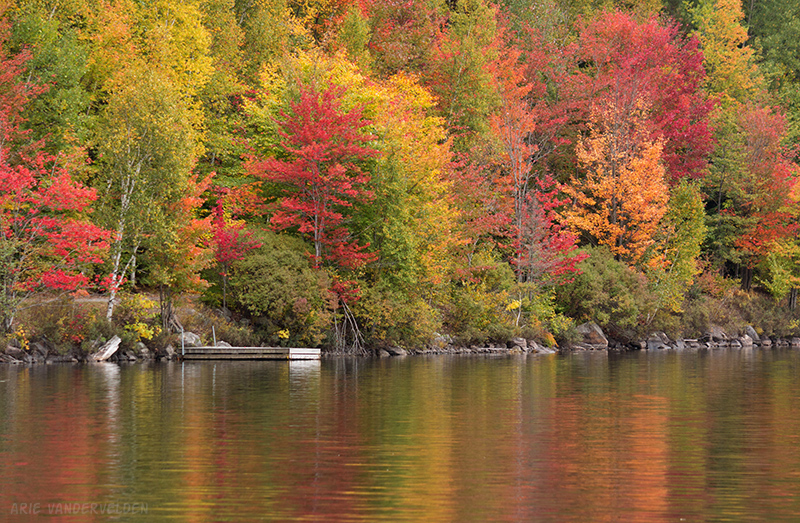 What can I say, other than that it was another fine day of cycling. 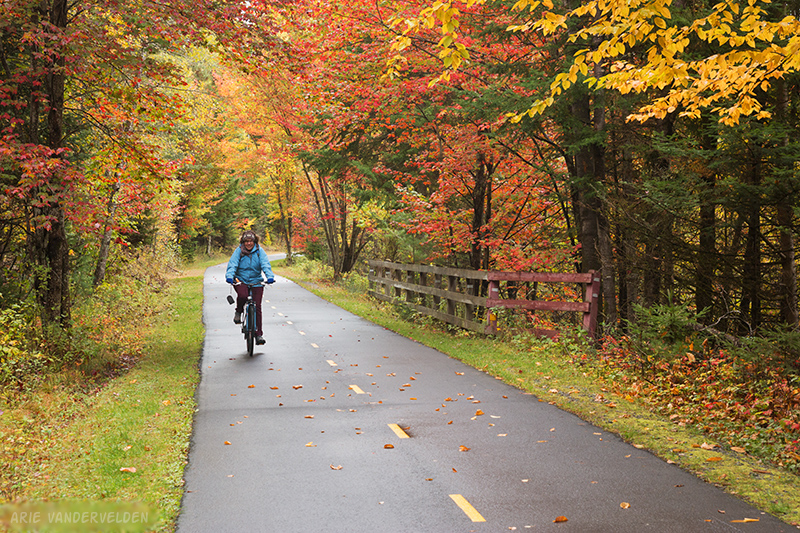 This year we didn’t stay in Saint-Agathe-des-Monts.  Instead we continued on to Val-Morin where we stayed in a gîte hosted by Raymond and Michelle, a retired couple.  They were very friendly.  We had quite a talk with Michelle, and Raymond cooked us a gourmet breakfast.  We are talking duck confit with jellied white wine, as one of the side dishes.  Their house fronted a pretty lake. 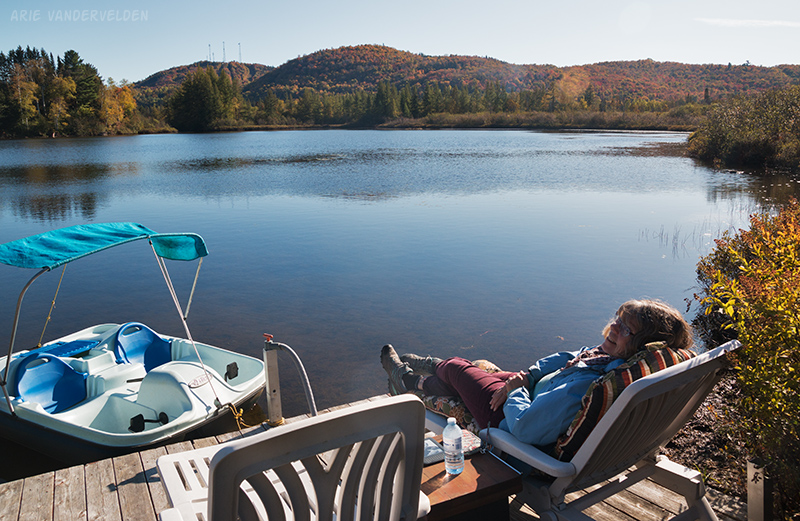 This was a pretty easy day with mostly downhill coasting. 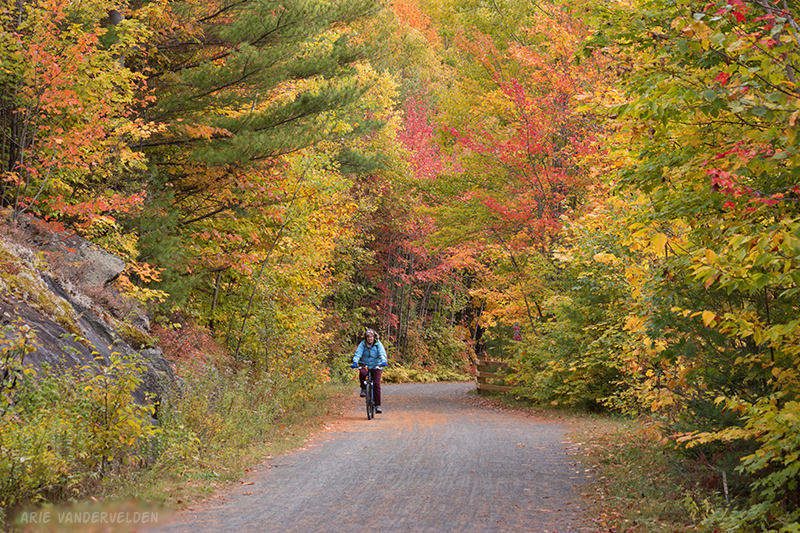 There was some pretty scenery along the way. 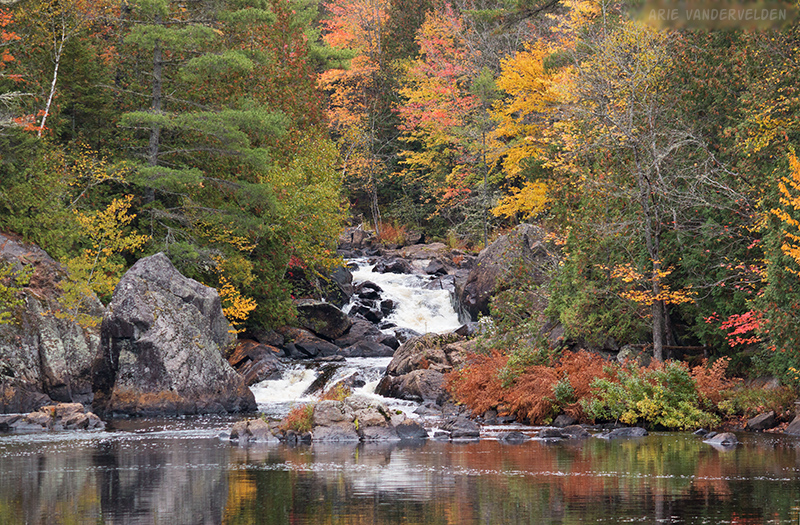 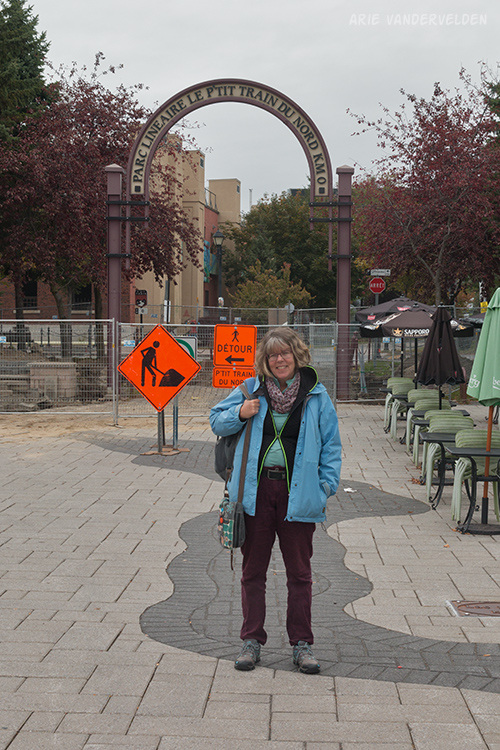 It was a scenic, nice, relaxing trip.  Even though this was the second time it did not lose its charm.

We spent two and a half days in Montreal before flying home.  It’s not much time to see and do very much, but we did our best.  We stayed in Le Plateau, a vibrant neighbourhood where Leonard Cohen used to live.  We dined in Little Portugal, went to Schwartz’s deli for Montreal smoked meat sandwiches, and bought bagels at St. Vivateur.  We walked through the streets, took pictures of curved staircases and modern-art murals, and soaked up the atmosphere.  And then it was time to go home. 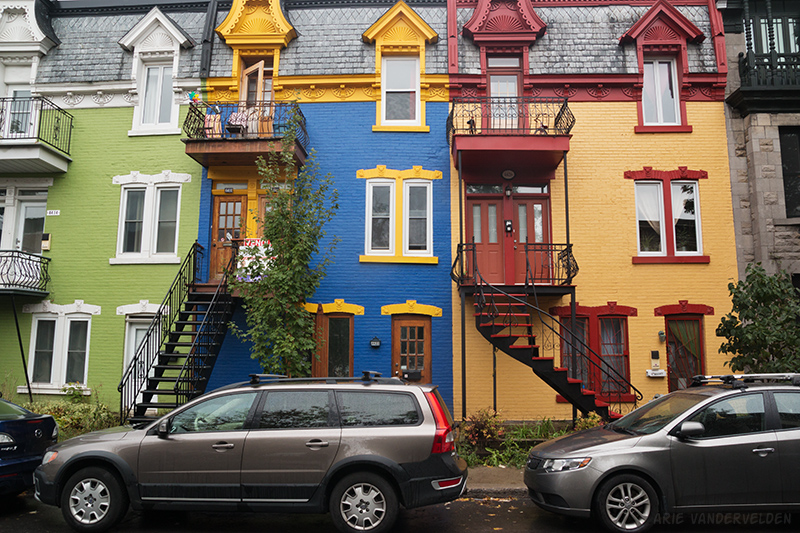 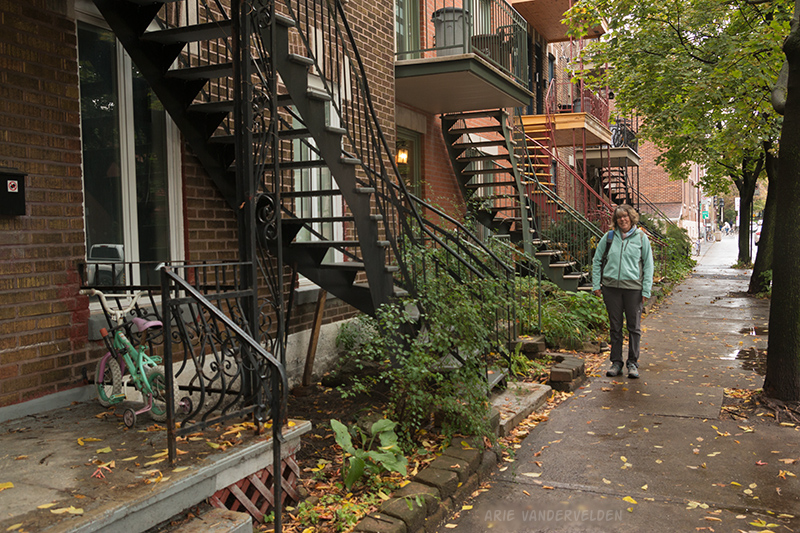 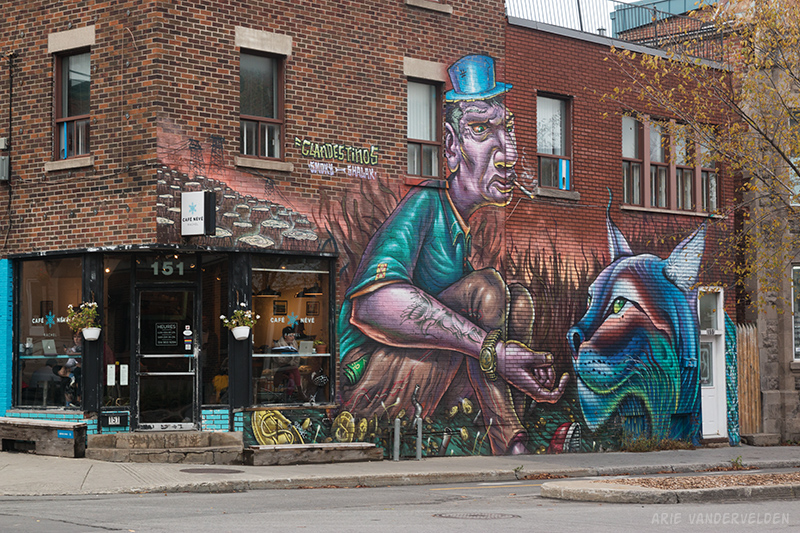 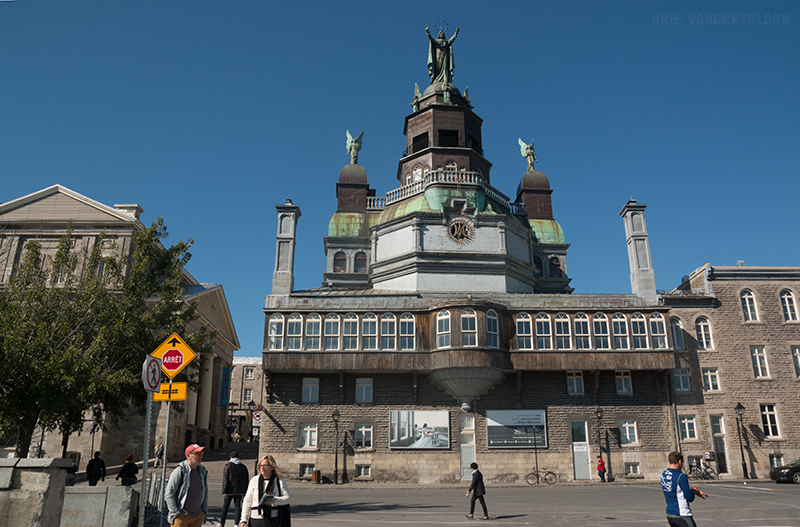 I described the logistics of this trip in last year’s post.

This year we did not stay in Saint-Agathe-des-Monts.  The hotel there was fully booked.  Instead we stayed at La Luciel in Val-Morin.  This B&B is less than 100 m from the cycle track.  Hosts Michele and Raymond were very kind to us.  Highly recommended.