The Nakasendo Way ( 中 山 道  in Japanese) is an old route through the mountains of central Honshu.  It connected Edo (Tokyo) with Japan’s old capital city of Kyoto.  Although its beginnings have been traced back to the eighth century, the heyday of the Nakasendo Way was during the Edo period (17th, 18th, and early 19th centuries) when pilgrims, samurai warriors, and nobility traveled up and down the path.  Post-towns sprang up at regular intervals along the route to accommodate the travelers.

Nowadays, large sections of the old Nakasendo way have been paved over or have disappeared beneath modern towns and cities.  But portions of the old trail still exist, and some of the old post towns have been carefully restored to their former glory.  These old sections of trail have been stitched together by plotting a course along modern roads and paths to connect the post-towns.  The modern Nakasendo Way, then, follows hiking trails through the forest, country roads through farm fields, sidewalks through towns, and on occasion the shoulders of major highways where other options do not exist.  The result is an enjoyable mix of historical sights and rural everyday Japan.

Most modern hikers do not walk the full 500 km from Tokyo to Kyoto.  Rather, people pick and choose sections that interest them.  The short hike between the post-towns of Tsumago and Magome is the most famous section; it is well-described in guidebooks such as Lonely Planet and Rough Guides and it is well-visited by foreign tourists.  Other sections take more sleuthing to plan and find your way.  We spent six days on the trail in the Kiso Valley of central Honshu, starting at Narai and ending at Nakatsugawa.

From Tokyo we took the train to Matsumoto, a small city at the head of the Kiso Valley.  Matsumoto isn’t really on the Nakasendo Way, but it has a well-preserved wooden castle that is worth a look.

Matsumoto is more than just a quick stop to look at the castle.  We really liked the compact inner city.  It has a laid-back vibe, some nice shops, good-value business hotels, and great dining scene.  Here is a picture of a historic building in Matsumoto, wedged between two modern concrete high-rises.  Its architecture mimics that of the castle.  To me it symbolizes the preservation of the Nakasendo Way; the old and the new.

It was a cool crisp day, and when the sun set the temperature plummeted.  We shivered as we hiked back to our hotel, vowing to bring our jackets and sweaters along next time we’d go out in the evening.

A short trainride from Matsumoto took us to Narai, one of the best-preserved post towns along the Nakasendo way.  We stored our bags at the train station and spent the day exploring the town and its surroundings.

Past the train station, historical wooden buildings line the Nakasendo Way for about a kilometer.

I enjoyed studying the architecture of the old houses, with their intricate latticework of wooden slats.  Many of the houses had potted bonsai trees set out on the sidewalk, or else chrysanthemums.  Chrysanthemums are very important to the Japanese.

Some old houses have been converted into shops selling lacquerware – a local specialty.

Diana had a cold, and bought a herbal remedy from a pharmacy.

At the edge of town is a shrine.  A gentleman came by, tossed a coin into the coin box, rattled the bell with the rope, bowed deeply twice, said his prayers, and bowed again.

Past the shrine the Nakasendo trail heads into a forest of cypress trees.

This trail goes across Torii Pass to the town of Yabuhara, a three-hour walk, where you can pick up the Kiso Valley train line.  It’s a popular hike.  However, feeling a bit under the weather we hiked partway up and returned back to Narai.

In the afternoon we took the train from Narai to Kiso-Fukushima, a larger town in the Kiso Valley.  We stayed two nights in a ryokan, a traditional Japanese hotel.  The floor of our room was covered with tatami mats, and futons are laid out for sleeping.  There was a low table and chairs without legs for relaxing.

Sleeping on a thin futon is a challenge for westerners who are used to thick mattresses.  Whenever we stayed in traditional Japanese lodgings I’d rummage through all of the closets to see if there were any spare futons.  In most cases we were able to double them up.

Our ryokan overlooked the river, and we could faintly hear the sound of the rushing water in our room.  I imagine in the summertime with the windows open it would be quite nice, but it was cold outside when we visited.  In the morning when we woke, up, we spotted a troupe of macaque monkeys jumping from rooftop to rooftop across the river.  Diana managed to grab her camera in time to take a quick snapshot.

Dinner at our ryokan was an elaborate affair.  Dinner included shabu-shabu (hotpot), tempura, sashimi, an assortment of pickles, miso soup, rice, and more, all beautifully presented.  Breakfast included much of the same foods.

We spent a day walking around Kiso Fukushima.  We started at Kozenji, a temple just down the road from our ryokan.

The temple claims to have “the largest rock zen garden in the orient.”  I’m not quite sure how to interpret the various elements of the rock garden, but I think they represent landscape elements such as rippled water, mountains, and clouds.

After the temple we walked around town, making a big circle.  We stopped at a bakery and bought some buns for lunch, and we looked in the showroom of one of the two local sake breweries.

Kiso-Fukushima is more of a workaday town, compared to the postcard-perfect village of Narai.  However if you look around there are many old buildings – it’s not all concrete and cinder blocks.

Some parts of town had quite well-preserved buildings.

Japan is a study of aesthetics, and just about every house presents a still-life, ready for a photographer to shoot.  I really enjoyed looking around and noticing details.

We ended our day at the foot-onsen (spa) in the center of town, by the river.  You lift the wooden lids, soak your feet, and put the lids back when you’re done.  I think it’s a good thing to have for the public. 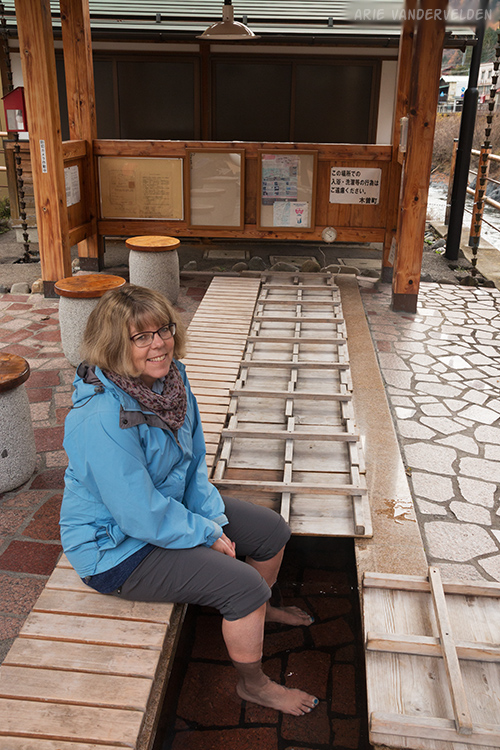 Continue on to part two of our Nakasendo Way hike.

The Kiso Valley is served by a local train that goes from Matsumoto to Nakatsugawa.  This train stops at every village, about every 5 km or so.  Stops are announced in English.  Some stations are staffed and others are not.  At the staffed stations you can buy a ticket, or else you can pay the train driver.  You enter the train at the rear.  If you don’t have a prepaid ticket, take one from the machine.  Short hops cost only a few hundred yen (a few dollars).  Exit at the front, and pay the driver or else give him your prepaid ticket.  The tourist info can give you a train schedule. 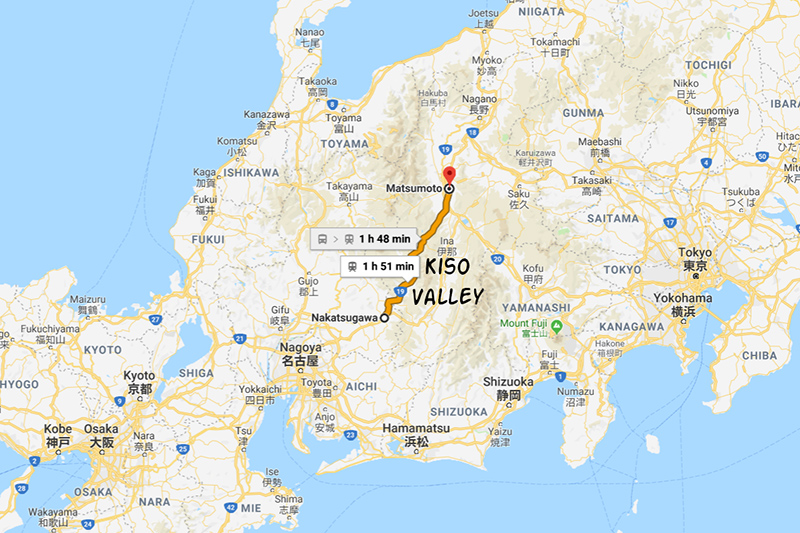 Lacking good maps, I was relying on signs when we first started our hike.  It is worth memorizing the kanji for Nakasendo Way: 中 山 道.  Look for these symbols on signs along the trail.  It turns out that some parts of the Nakasendo way are well signed but others are not.  Only in when we arrived in Suhara did I obtain a copy of “Shinsyu Kisoji – Nakasendo walking map” published by the Kiso Tourist Federation, which covers Narai to Magome.  It’s a very detailed map and an invaluable resource.  Unfortunately I haven’t come across a .pdf version online.  I suggest asking a local tourist info for a copy.

You don’t have to carry your big suitcase with you when hiking the Nakasendo Trail.  You can send your luggage ahead using the Takkyubin service, and carry with you only a small bag with enough supplies for a few days of hiking.  Takkyubin is like a courier service; you can ship just about anything to just about anywhere in Japan.  Unlike British luggage shuttles for hikers, Takkyubin is not a same-day service.  Delivery is next day (earliest) or else you can specify a delivery date up to a week ahead.  We shipped a bag from Kiso-Fukushima to a hotel in Kyoto, and the bag magically showed up on the day of our arrival in Kyoto.  We did the same when hiking the Kumano Kodo trail on the Kii peninsula.

To drop off a bag, look for a shop with the green-and-yellow cat symbol.  You’ll have to fill out a form, but the boxes have both Japanese and English descriptions.  We put the destination’s address in English and the bag arrived just fine.  Shipping a large backpack cost us about 20 Canadian dollars (less than 2,000 yen).