This is part two of our bike trip in Quebec.  Read part one here.

We woke up to a cloudy, windy, and cold day.  After breakfast we set off down the trail again, which is paved in this area.  The first bit was downhill, to a bridge across the Rivière du Diable.  The trail then passed a golf course and some suburban developments before starting a looping ascent, winding around hillsides.

The fall colours were really well-developed here.  It seemed like each day brought more colour.

Past Saint-Faustin the trail once again turned to gravel.

Soon the trail approached the main highway and stayed quite close to it all that way to Saint-Agathe-Des-Monts.  There was some roadnoise, but the fall colours here were very pretty.

The day got colder as it progressed, rather than warming up.  We stopped to put on scarves and gloves.

We arrived in Saint-Agathe-Des-Monts a bit too early for check-in at our hotel, so we wandered through town a bit.  It’s a cute town with many little shops.  We bought some coffees and muffins and had a snack on the dock by Lac des Sables.  It was Sunday, and the bells in the large local church were ringing.  The sound took us back to being on the other side of the Atlantic pond.  Diana and I agree that we should have more church-bells in Canada.

We cycled to our hotel, checked into our room, and warmed up our bones in the jetted tub.  Afterwards we went to the dining room for our six-course meal which was included in our package.  Before the main course there was a palate-cleanser.  I decided to upgrade from the house granita to a shot of grappa, and Diana did the same.  The owner seemed shocked and asked, with eyes wide open: Are you really sure about that?  We laughed about it later on.

This was our last day of cycling!  Time flies when you’re having fun.  We woke up to a crisp, calm, clear morning.  A perfect fall day that couldn’t have been better.

At 50 km this day was our longest one, but from Saint-Agathe-Des-Monts it’s downhill all the way.  There were sections where for miles on end we coasted without applying the brakes.  The kilometer posts flew by.

There were lots of pretty old railway stations along the way.

The sun lit up the colourful leaves.

Much of the route was along the riverbanks of the Rivière du Nord.

Only in the last few kilometers did the surface change from gravel to pavement, and urban sprawl became more apparent.  And then we were back where it all started six days ago.  We were sad to hand in the bikes.  Biking the P’tit Train du Nord is a lot of fun, and we vowed to come back some day and do it again.

After our bike trip we spent a few days in Montréal.  We had booked an airbnb apartment in the Le Plateau neighbourhood.  The apartment was in a stylish 19th century building facing Square Saint Louis.

We were just a few blocks away from St. Laurent Boulevard, called the Main by locals.  It has many shops and restaurants along it.  It didn’t take us long to find Leonard Cohen.

As we wandered up Saint Laurent we found ourselves in Little Portugal.  We stopped at Parc du Portugal and Diana took a few pictures there.  If I had done my research beforehand by reading this article, I would have known that Leonard Cohen’s house faces this park.

We stopped for Montreal smoked meat at Schwartz’s deli, which has been operating since 1928.

Needless to say, the smoked meat sandwich was excellent.

Had I done my research I would have found out that Leonard Cohen preferred The Main deli across the street.

We walked further up Saint Laurent, veered off a few blocks to the west, and found ourselves in a neighbourhood populated by Hasidic Jews.  Men with black robes, ringlets, and black hats were everywhere.  It was very interesting.  Here we found St. Vivateur Bagel, in operation since 1956. 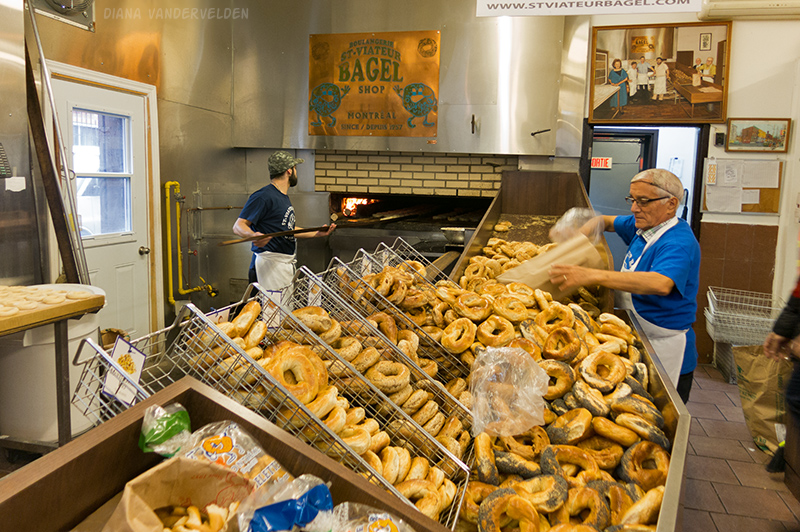 We bought a half-dozen bagels, still piping hot from the wood-fired oven, and a tub of cream cheese.  We took it to a nearby park and had ourselves a picnic lunch.  The bagels were easily the best we’ve had. 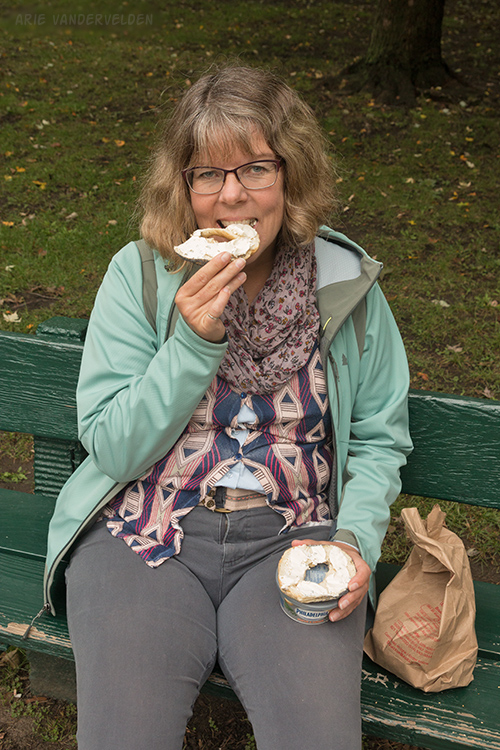 Cohen favoured Fairmount Bagel, just a block or two away.

Afterwards we started walking up Mount Royal.  We found ourselves in the historical Mount Royal cemetery, and tried to find a way out at the top to get to the top of Mount Royal but it was fenced off and there was a canyon with a roadway in it separating us from the top.  So, back down we went, along Mount Royal Boulevard with its fancy houses.  We did not know that Leonard Cohen is buried in the family plot in the Jewish cemetery, which has a separate entrance off of Mount Royal Boulevard.

So, I feel like we walked parallel to Cohen’s footsteps, not knowing it, but we gravitated to him by instinct.  Montréal is an interesting city, and a nice place to be.   I can see why Cohen didn’t stay permanently in Los Angeles (where the recording industry is) but he came back to Montréal again and again.  This was home to him.