In late April and early May of 2019, we hiked from Penzance to Padstow.  Read parts one, two, three, and four.  After or through-hike we rented a car and visited some more spots along the north coast of Cornwall and Devon.

From Padstow there is a pathway that heads inland along the River Camel.  The trail follows an old railway grade, and as such the trail is wide and gentle.  The first bit is open and has views of the estuary.

Near Wadebridge the trail becomes enclosed with greenery.

The scenery was beautiful.

There were not many benches along the trail, and the benches we did spot were occupied.  So for lunch we found a spot along the River Camel and we sat on our raincoats and ate our pasties.

Pasties (pronounced pass-tees) are meat pies, and a typical Cornish delicacy.  They were invented as lunches for the Cornish tin miners.  Supposedly the miners held their pasties by the crimp as they ate, and threw away the bit of crimp for good luck.  Which was a good idea because their fingers were tainted with arsenic.  We got our pasties at Chough’s Bakery in Padstow.  According to the locals, these are the best pasties around.  We agreed that indeed they were very good.

Ahead was a sign for a winery.  Yes, a winery in England!  We turned off and pushed our bikes uphill.  We sat on their terrace overlooking the vineyard and spent some time sipping wine while enjoying some sunshine.  It was very pleasant.

Port Isaac: On the set of Doc Martin

Port Isaac (“Port Wenn”) has been the set for the ITV comedy-drama “Doc Martin” for the past 15 years or so.  When we visited they were busy shooting an episode inside of the local pub “the Crab and Lobster” (which in real life is called the Golden Lion).  The following photo shows the film crew’s vans parked in the harbour, and a floodlight pointed at “the Crab and Lobster”.

We wandered down to the “Crab and Lobster”, and hung around for a while.  Security staff in reflective jackets shushed us as scenes were being shot.  After a while, John Marquez came out (“Joe Penhale”), as well as Eileen Atkins (“Ruth Ellingham”).

Since visiting Port Isaac we’ve become big fans of the show.  Doc Martin is a stern, grumpy country doctor who’s harried and pained expressions reminds us of Bob Newhart.  There is an oafish policeman, gossipy locals, and small-town charm, just like CTV’s Corner Gas.  It’s quite a fun show, with quick and dry British wit.

Because the pub was closed for filming, there was nowhere in town to have dinner.  So, we hiked up to the little grocery store at the top of the hill (which I now recognize as a common filming location) and we bought some ingredients for a tapas-style meal.

We wandered around Port Isaac a bit.  It’s easy to see why the producers chose this village for the tv series.  It is quaint and cute.

Or B&B was just uphill from the “Crab and Lobster”, opposite the old school (which is also a common filming location).  As we were eating our dinner we alternately looked outside, where filming was going on, and at our tv set, which had by chance an episode of Doc Martin playing.  Our little B&B attic room had a dormer window with a great view of the harbour.  In the street on the other side of the harbour, the little stone house (below the bigger one) with a streetlight to the left of it is Doc Martin’s surgery.

Now, back in Canada, whenever we watch an episode of Doc Martin it takes us right back to Port Isaac and Cornwall.  It’s a great memory to have.

Tintagel: In the footsteps of King Arthur

Tintagel (pronounced tin-TAH-gel) is a village set back about half a mile from the coast.  Just offshore is Tintagel Island, which has old ruined fortifications on it and has long been associated with the legend of King Arthur.  The ruins date back to the dark ages and medieval times, and the legend of King Arthur, magician Merlin, the sword Excalibur,and Lancelot and the knights of the round table date back to at least the 11th century. When we visited the ruins were closed for renovations, but we could see the island from the mainland.

From Tintagel we hiked a short loop trail.  We hiked northeast along the road for a bit, and then headed along a footpath across a field.

The path led to St. Nectan’s Glen.  It’s a pleasant wooded valley.  There is a waterfall there, but it’s on private property and entrance prices are steep.  Nevertheless it’s popular with locals.

We skipped the falls and headed across a hill to the hamlet of Trethevy.

A trail followed a stream downhill past some millhouses and a fake Celtic rock carving (likely a Victorian-age folly) to a rocky valley.

Near the mouth of the creek we intersected the coastal path, and we climbed up the left bank to a viewpoint above.  It seemed like a great spot for a cup of tea and a scone.

The coastal path between Rocky Valley and Tintagel was very scenic.

The sea was an azure blue.  For some reason where were a few rafts of sea foam.

On our way to Crackington Haven we stopped by at Boscastle.  From the harbour there is a trail that goes out to a headland.  In the following photo, these elderly ladies are watching their footing as they climb some steps, and for this reason they are oblivious to the spectacular kink band folding in the Caboniferous rocks beneath their feet.

At Crackington Haven we hiked the coastal path to the south.

There were spectacular views down the coast.  Near the water’s edge I could see more contorted rocks.

Near a tall hilltop we turned inland, where we followed an inland trail back to our car.  The first bit went through a mucky farmyard where we had to pass through a paddock with a bull in it.  Having survived that, we hiked down a pleasant wooded valley back to our car.

We stayed at a farmhouse out in the countryside.  The house was on a hill, and you could see the sea in the distance.  The house dated from the 16th century and it had walls about two feet thick of solid stone.  The owner had offered to cook, and we spent the evening talking to another couple over dinner.  They were also walking a section of the coastal path.  As the sun set and wine bottles became emptier the conversation became quite spirited.  It was a fun evening.  It was sure nice to eat a home-cooked meal after all the fried pub food we’d been having.

The next morning the B&B owner cooked us a gigantic breakfast, the biggest one we’ve had so far.  Farm-fresh eggs, a huge sausage, bacon rashers, black pudding, beans, mushrooms, tomatoes, toast.  Oh my….

Bude (pronounced as Bewd or b-YOU-wd) is an easygoing, come-as-you-are town.  People go about their daily business, and when they get off work they’ll  grab their surfboards and catch a few waves.  We hiked a loop trail, starting out by hiking inland along the towpath of an old shipping canal. 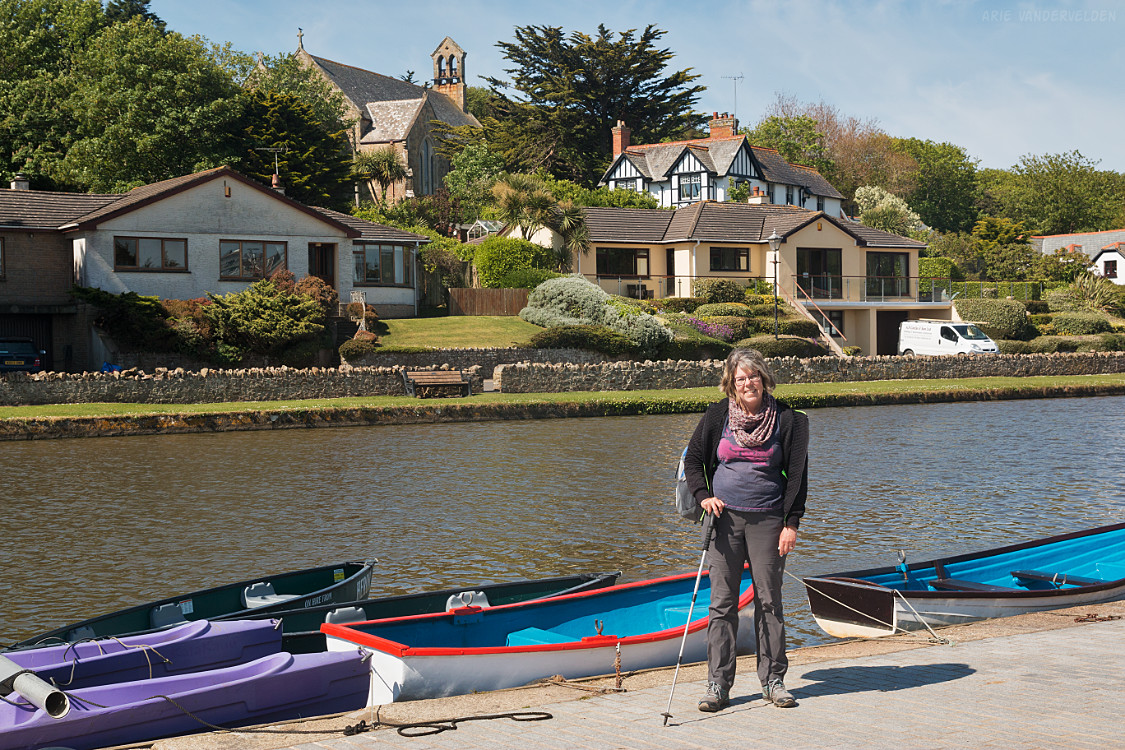 Near the head of the canal we passed underneath the A39 motorway through a pedestrian tunnel.  Beyond here we headed uphill to the village of Marhamchurch.  Here we had a snack, and then backtracked to the A39 tunnel.  On the west side of the tunnel we found a footpath that headed to the coast by crossing a hilltop.  In the following photo you can see the village of Marhamchurch in the background. 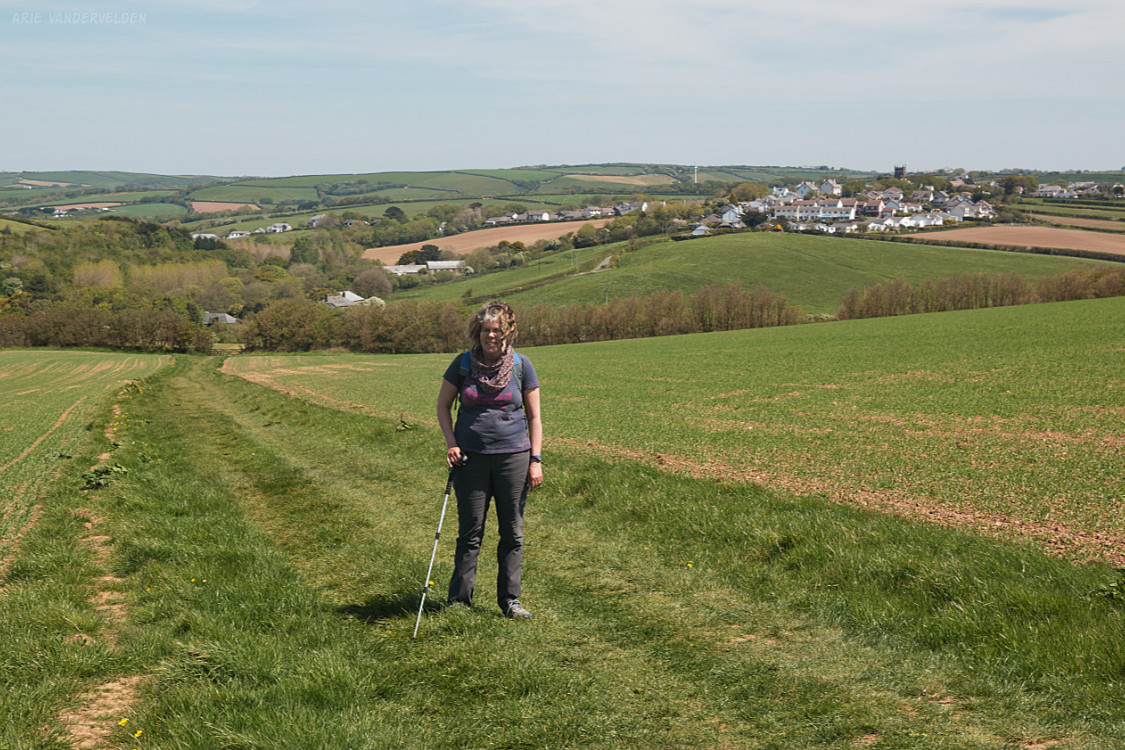 The trail ended up at Widemouth Bay (pronounced Widd-muth Bay).  We plunked down on the sand for a while.  Diana stared at the surf and I examined the fascinating jointing pattern in the rocks. 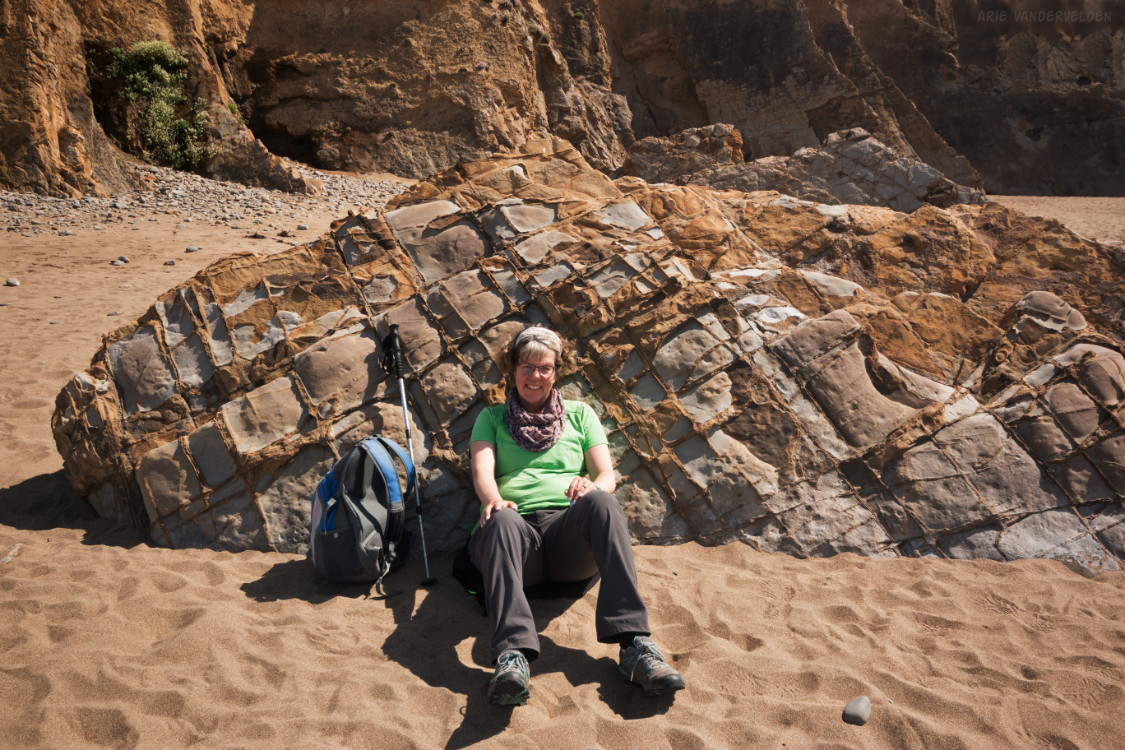 The hike back to Bude was really pretty.  There are some great coastal views. 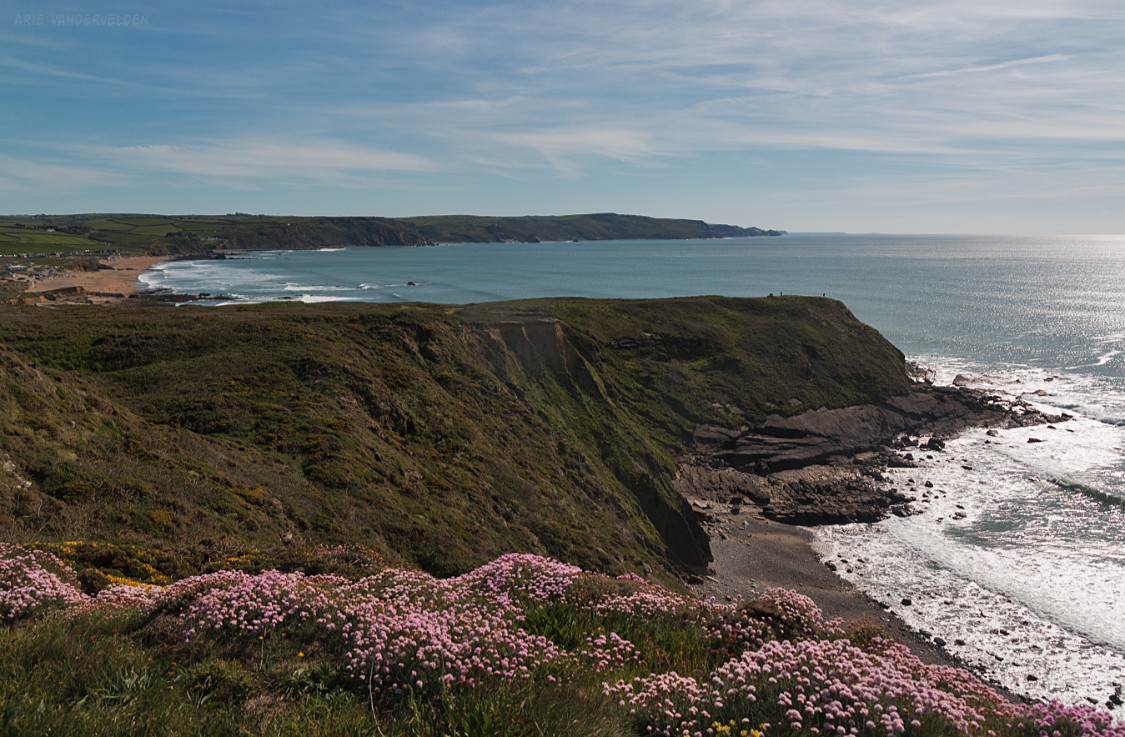 We stopped for a while and sat on a bench. 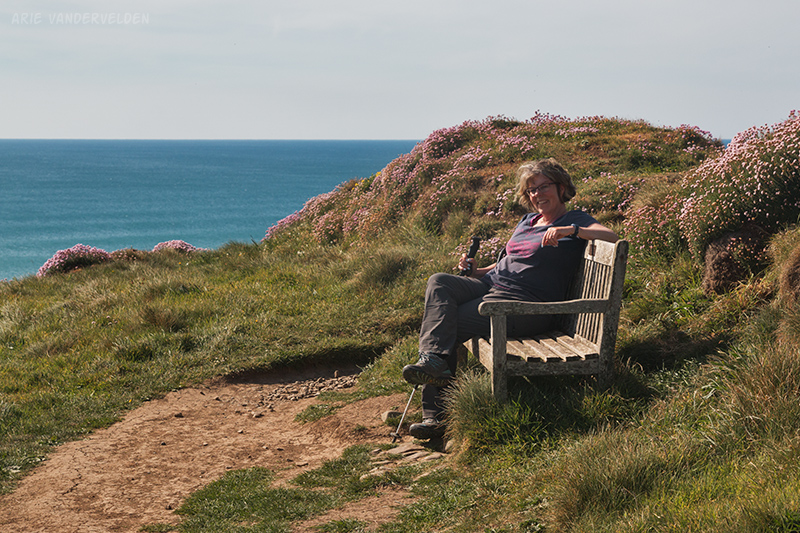 This section of coastline has flat ground leading to an abrupt dropoff and steep cliffs. 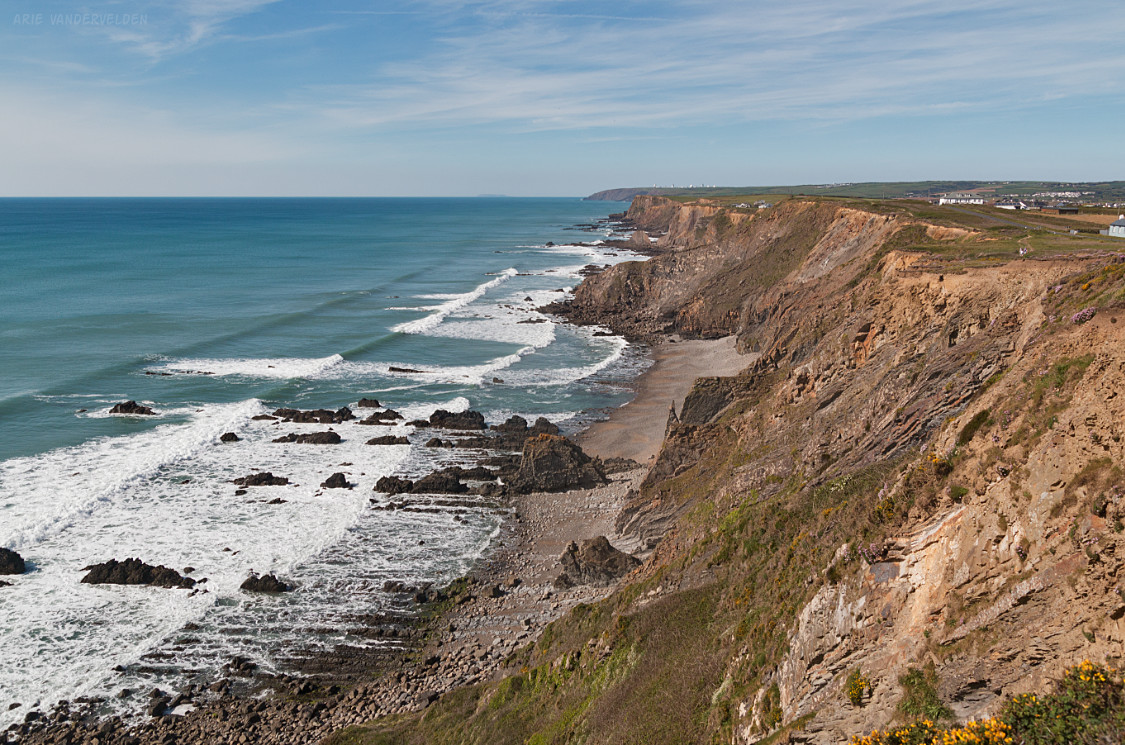 Before long we were at the outskirts of Bude. 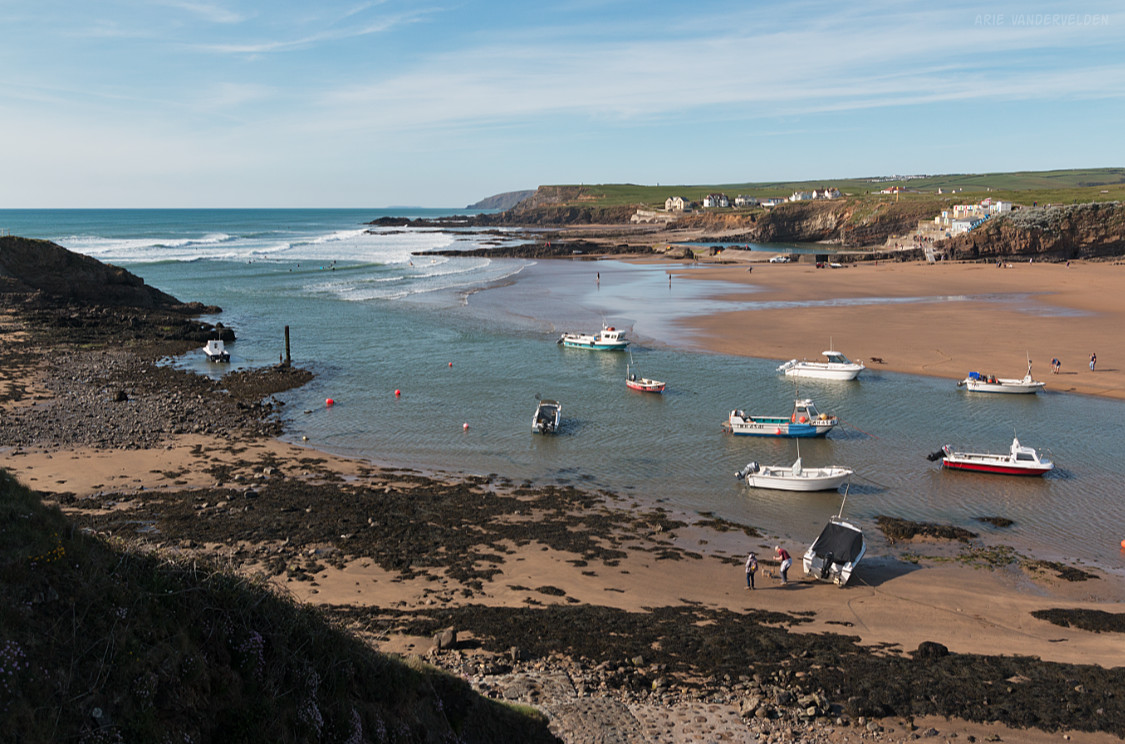 We celebrated our hike with a beer at the pub. 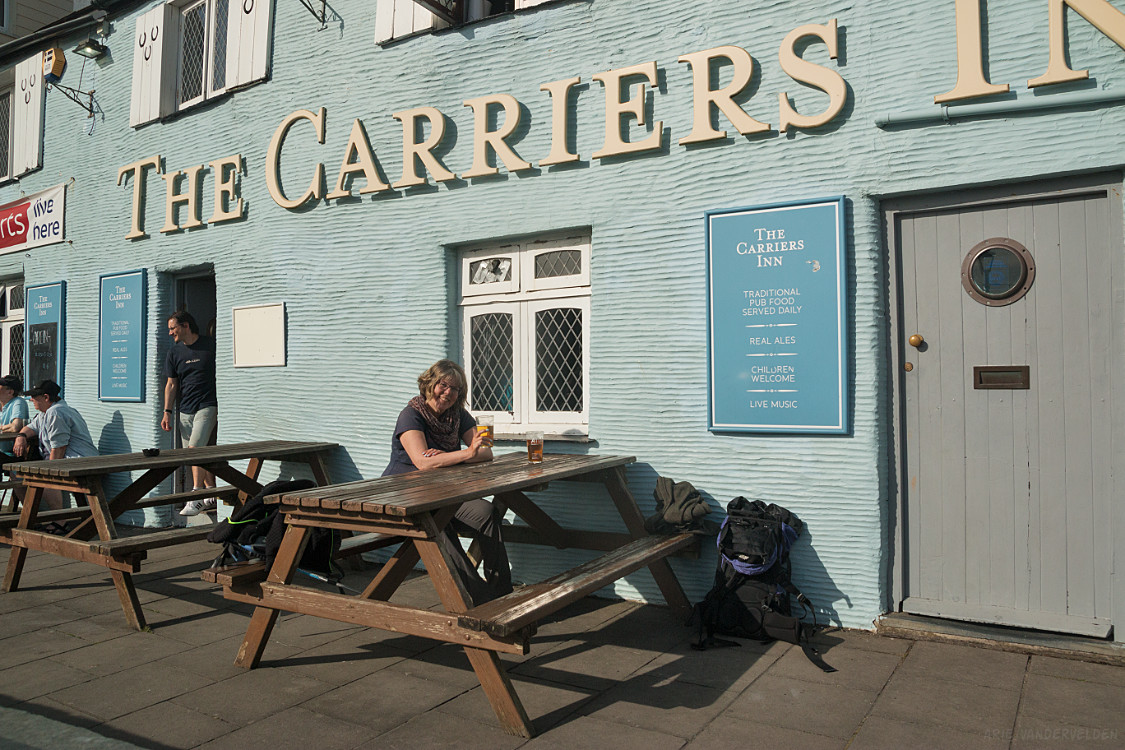 Having watched the local surfers riding the waves over the past few weeks, I thought I’d give surfing a try.  In the morning Diana and I walked to the beach, but after days of pleasant conditions the sea had turned to a white froth.  A swell was rolling in from the Atlantic Ocean, and the gentle waves were gone.  However a friendly surf-shop guy told me I’d be alright.  I swallowed hard as I rented a wetsuit and surfboard. 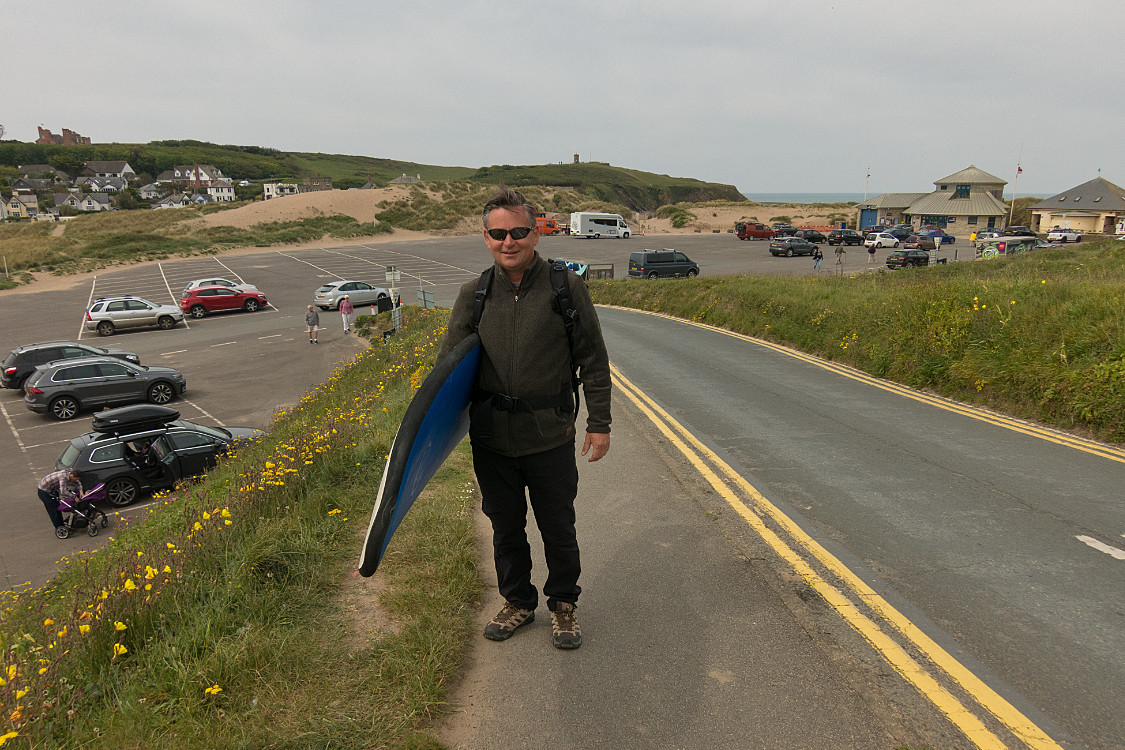 At the beach I noticed that several surfers walked to the edge of the water all ready to go, had a look, and then walked back again.  I had a chat with the lifeguard who told me not to go in too far, being able to touch the bottom, and to go in right in front of his post.  There was only one other guy in the water, a young guy named Lee from London, with tattoos on his neck and a gold tooth, apparently fearless, and also a beginner.  I spent several hours in the water, mostly jumping across crashed waves gone to froth, waiting for smaller waves.  I did get up on my feet ever so briefly. Diana took some pictures from the shore.  I had fun and I’m keen to try it again in more beginner-friendly conditions. 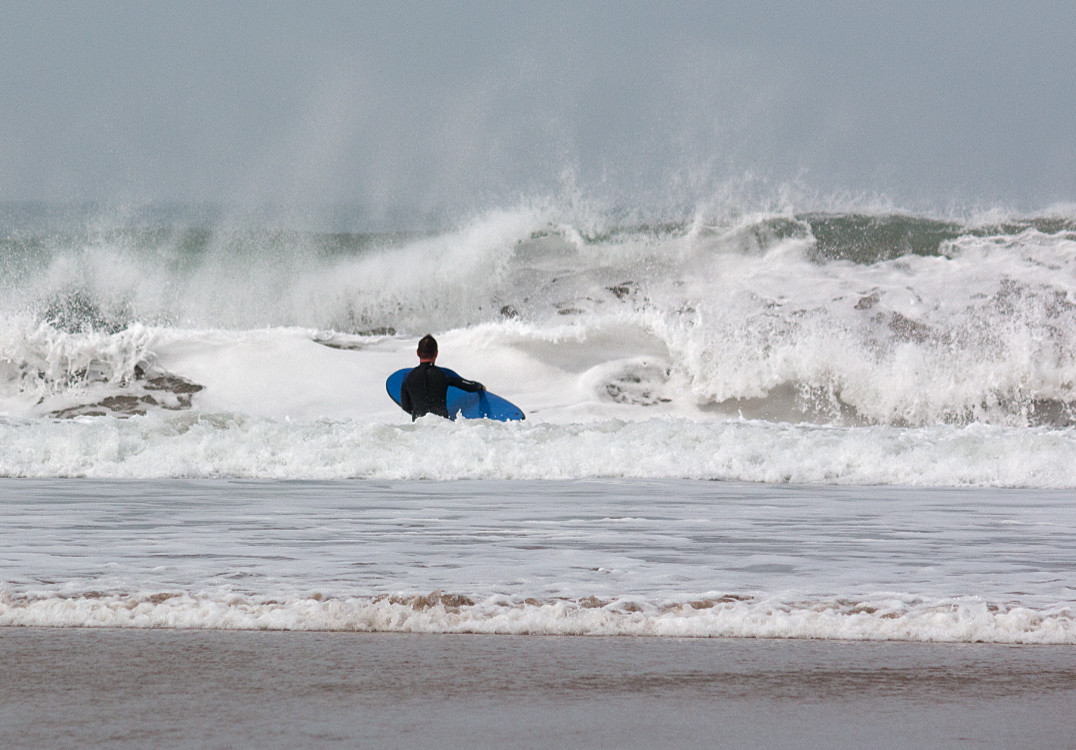 Later that day we walked the coast path to the north.  About a mile north of town is a tea shop called “the rustic tea garden.”  Here, two elderly ladies dish up cream teas from a 1970s-vintage trailer.  There is Margaret, who serves the customers and has a big booming voice.  “What would you loik, luv?” she asked me, with a big grin on her face.  She has a laugh that carries far.  “WHAA-WHAA-WHAA!!” we heard as we sat down with our scones at a picnic table, while Margaret was talking to some other customers. 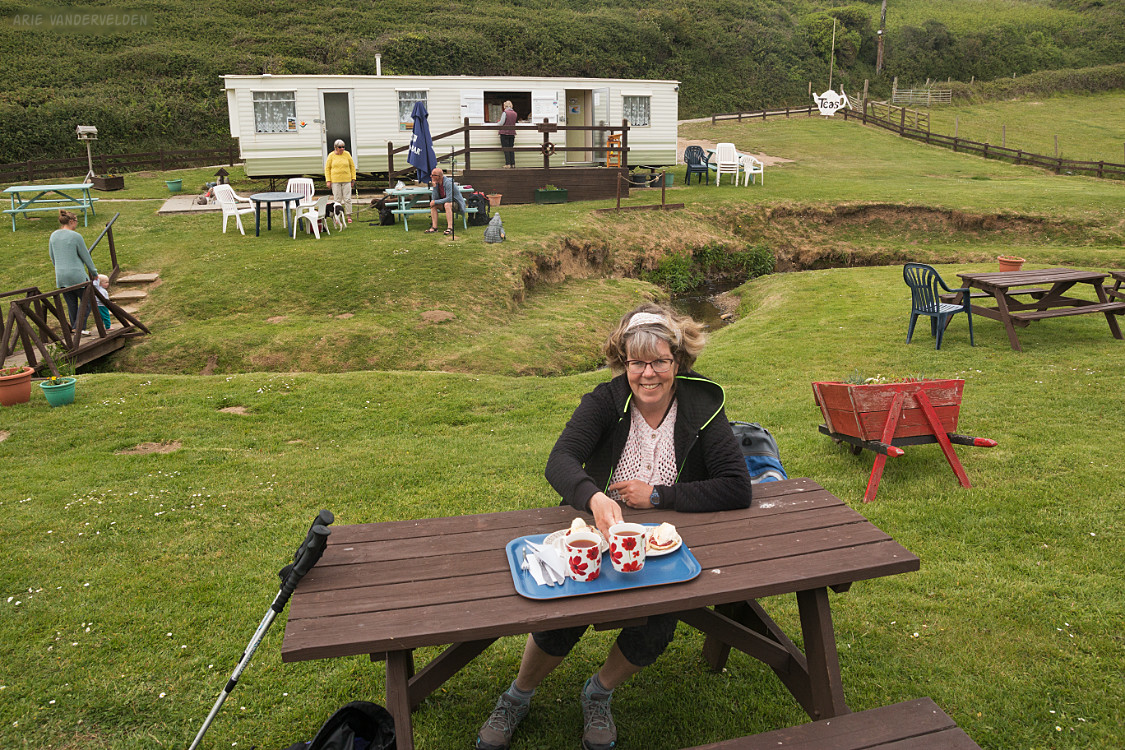 In the back was another elderly lady, maybe her sister, with a hunched back, making tea.  The scones were home-made and topped with jam and gigantic amounts of clotted cream.  Each half of our two scones had about a cup worth of clotted cream.  We tucked in and ate the whole thing.  One million calories later, we figured we’ll have to walk the coast path all over again to burn that all off… 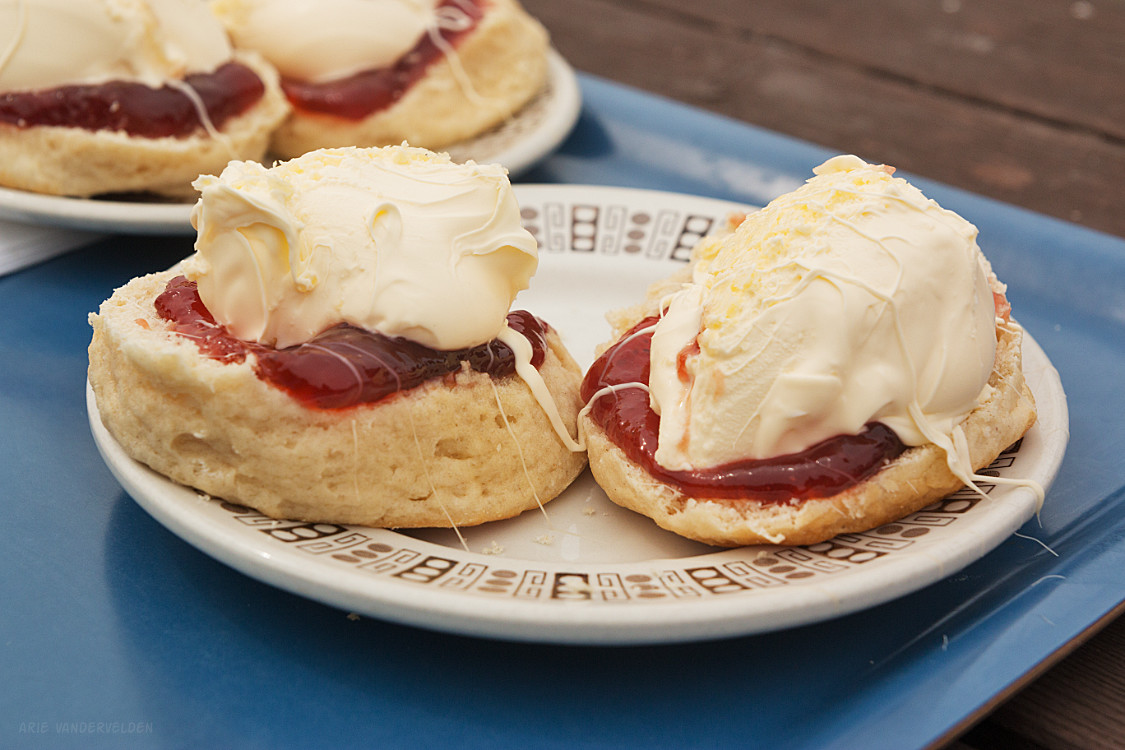 Originally we intended this section to be a through-hike with luggage delivery, but we changed things up by renting a car instead.  We rented a car at Newquay airport, which is located halfway between Newquay and Padstow.  The Newquay-Padstow bus stops by the airport.  We managed to get a deal to return the car at Bristol airport, from where we flew to Portugal (but that’s another story).

Once again I was freaked out about driving on the left, and once again it wasn’t a big deal once I got behind the wheel.  However some of the country roads in Cornwall are very, very narrow.  The locals drive very fast on these roads, and they know where the road is wide enough to allow two vehicles to pass, and where it isn’t.  Most country roads are hemmed in by dry stone walls and/or walls of vegetation, and as such there are a lot of blind corners.  Dealing with oncoming traffic was certainly a mental challenge.

In Port Isaac we parked at the first (upper) parking lot when we came into town, figuring it would be best value.  Wrong.  The lower parking lot is cheaper and a lot closer to town. 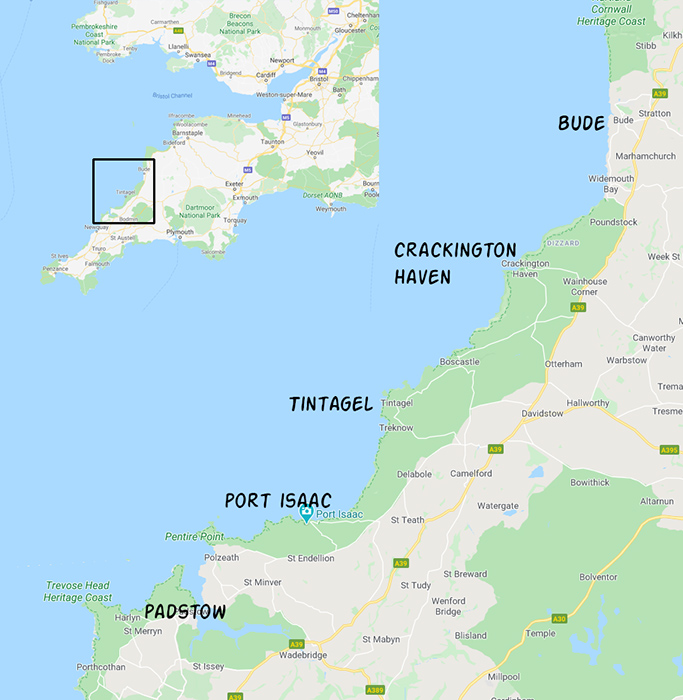