In 2019 we hiked several sections of the Southwest Coast Path in Cornwall.  We began our trip in Penzance, which is the furthest southwest you can go by train in Britain.  We arrived on the tail end of a wicked storm, which had pounded the coast over the past number of days.  As we stumbled out of the train we were hit by ferocious winds.  We sheltered behind a seawall, whiling away some time while waiting for our check-in time at our B&B.

The next morning it was overcast and there was a bit of drizzle, but thankfully the winds had died down.  We began our hike on the esplanade. 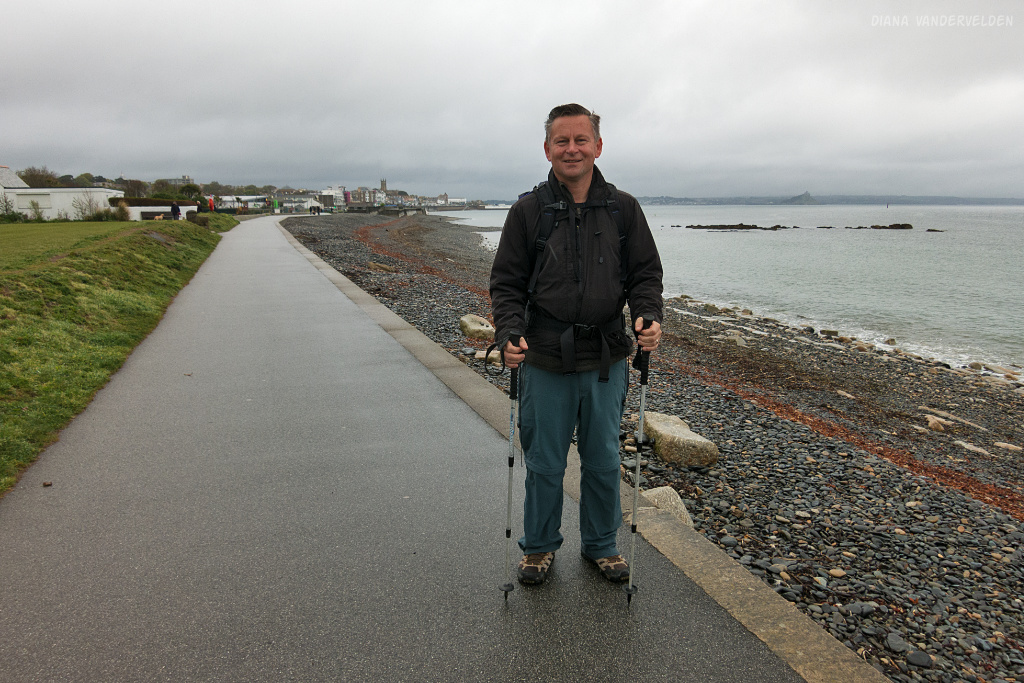 A short distance beyond is Newlyn, a fishing port.  It’s one of the few harbors on the Cornish coast with a commercial fishing fleet. 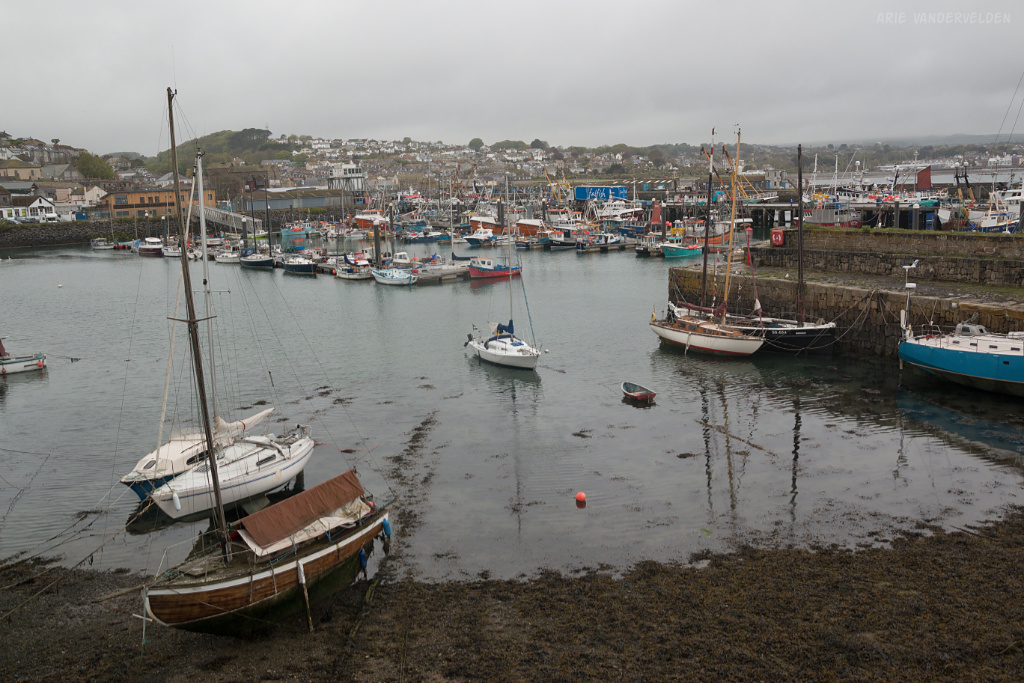 There is a yacht marina as well.  I like harbors, and I enjoyed having a look around. 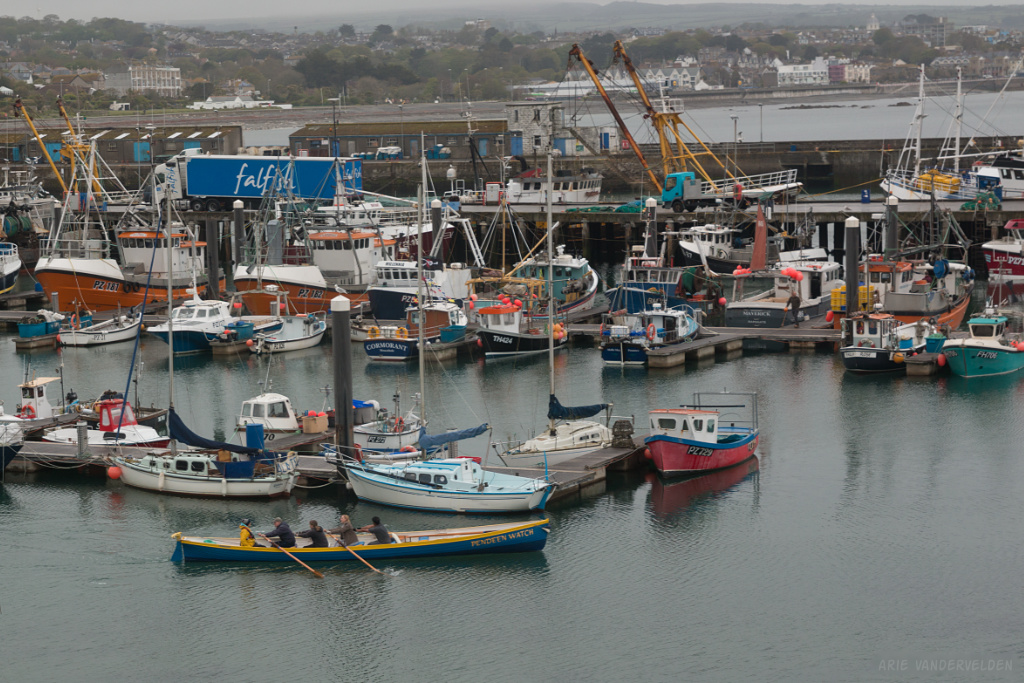 Past Newlyn we walked along the narrow coastal road, but thankfully there was a good sidewalk.  From here there were some nice views across the bay.  In the distance we could see St. Michael’s Mount, an island with a castle on it that’s only accessible at low tide. 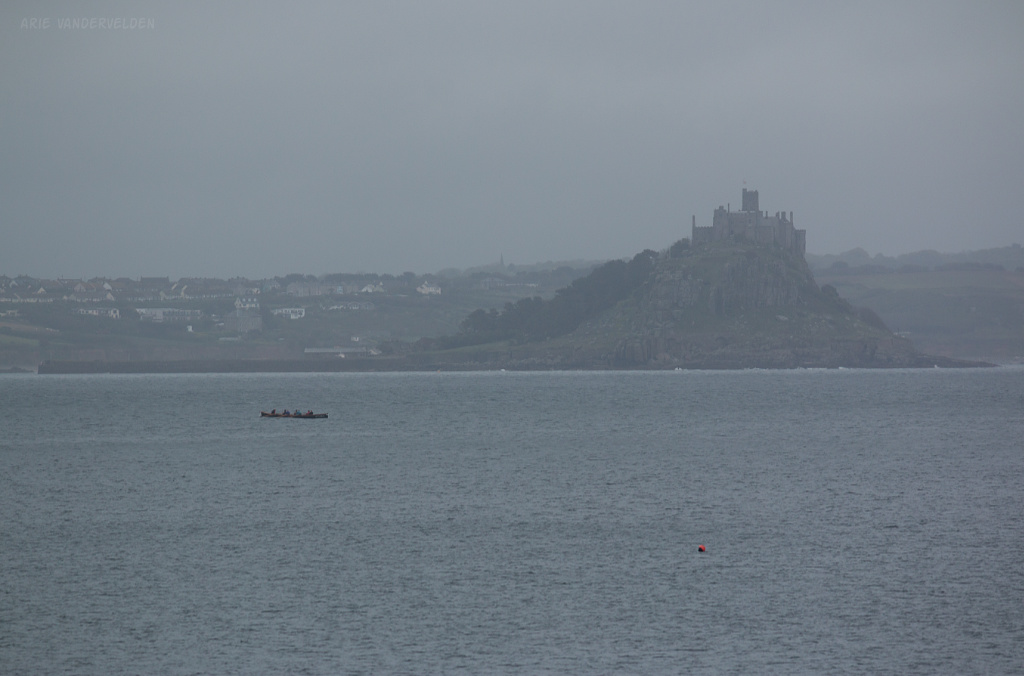 The coastal road let to Mousehole (pronounced maw-zull).  It is an extremely pretty little village, with cottages built out of the local grey granite crowded around a little harbour. 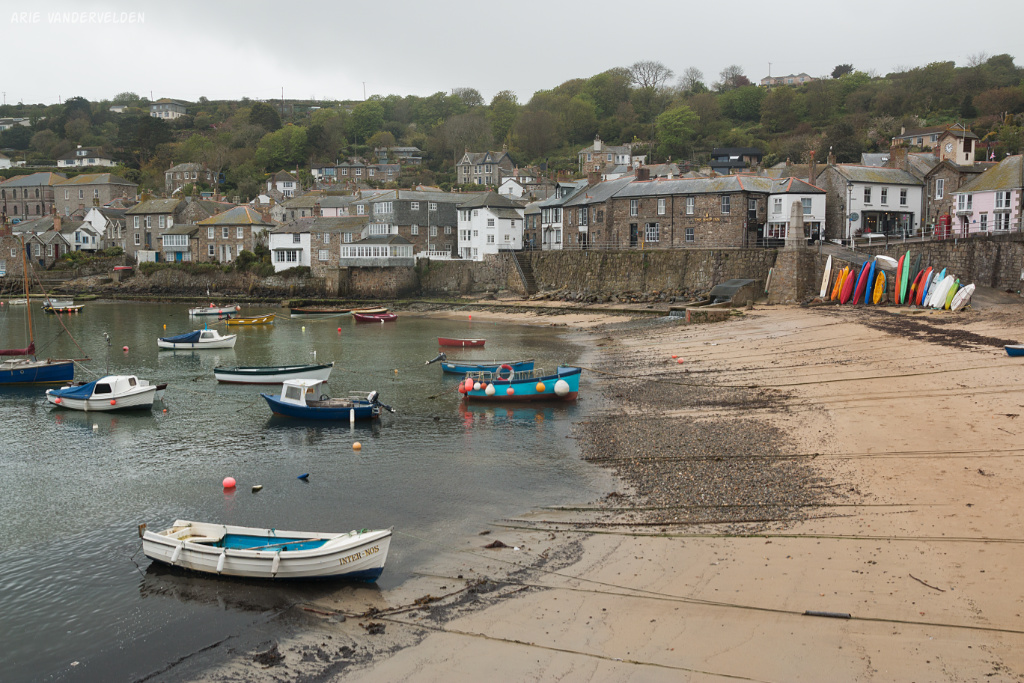 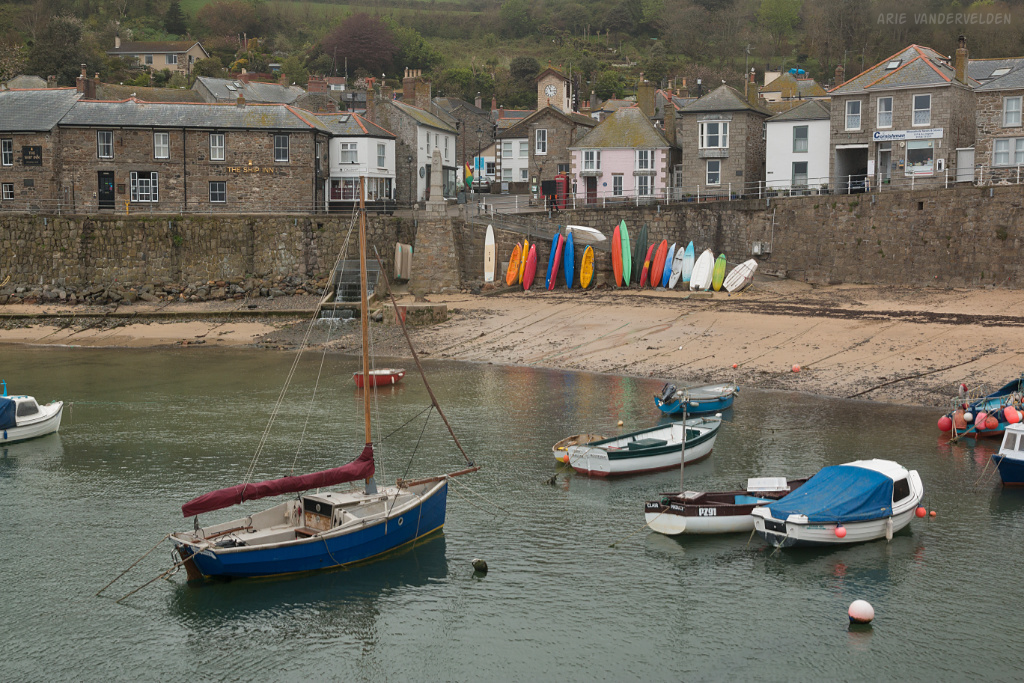 We were expecting Cornwall to be much more developed, but aside from two ice-cream shops there was pretty much none of the usual tourist clutter. No trinket shops, no arcade amusement places or any of that.  Just local fishermen cleaning fish, and picturesque little wooden dories.  I took lots of pictures.  Diana bought some jam at a honesty-box, to put on our scones. 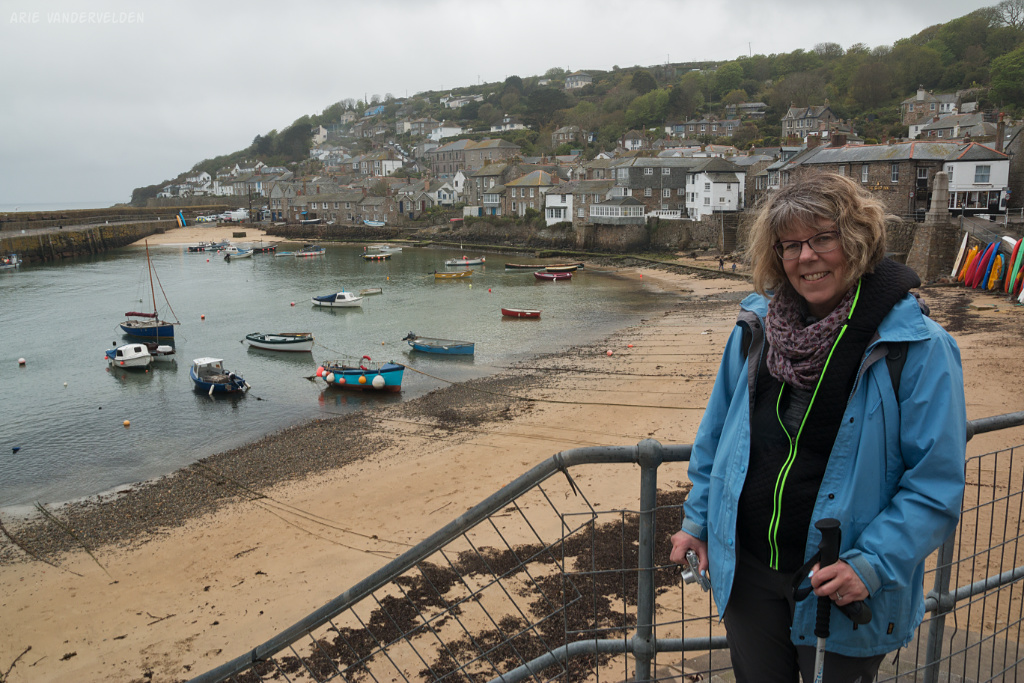 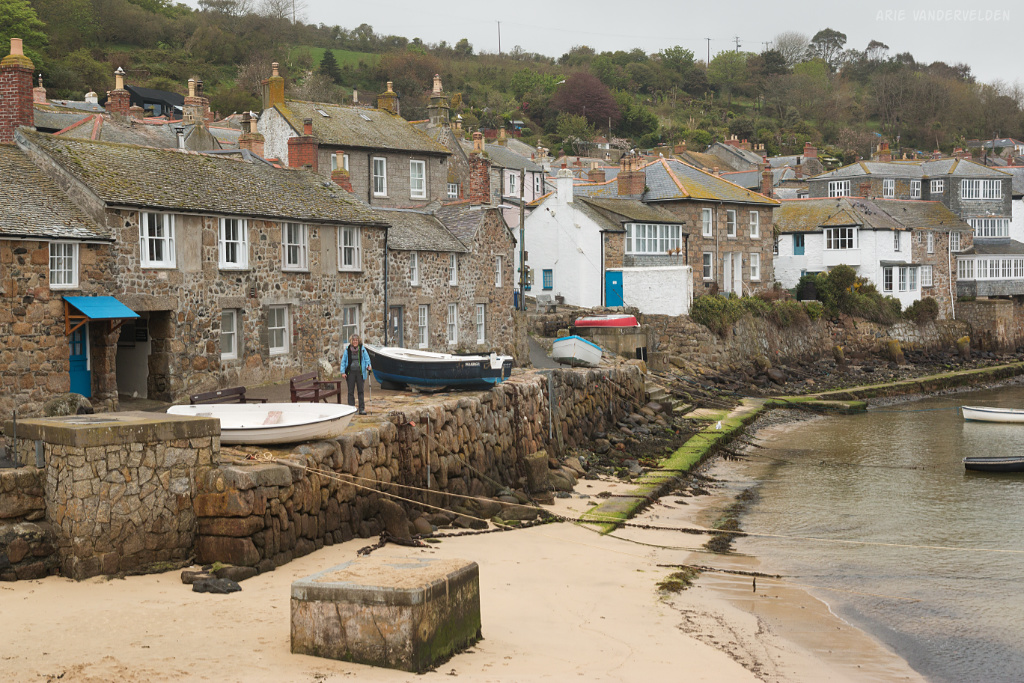 On the south side of town, a road led steeply upwards. 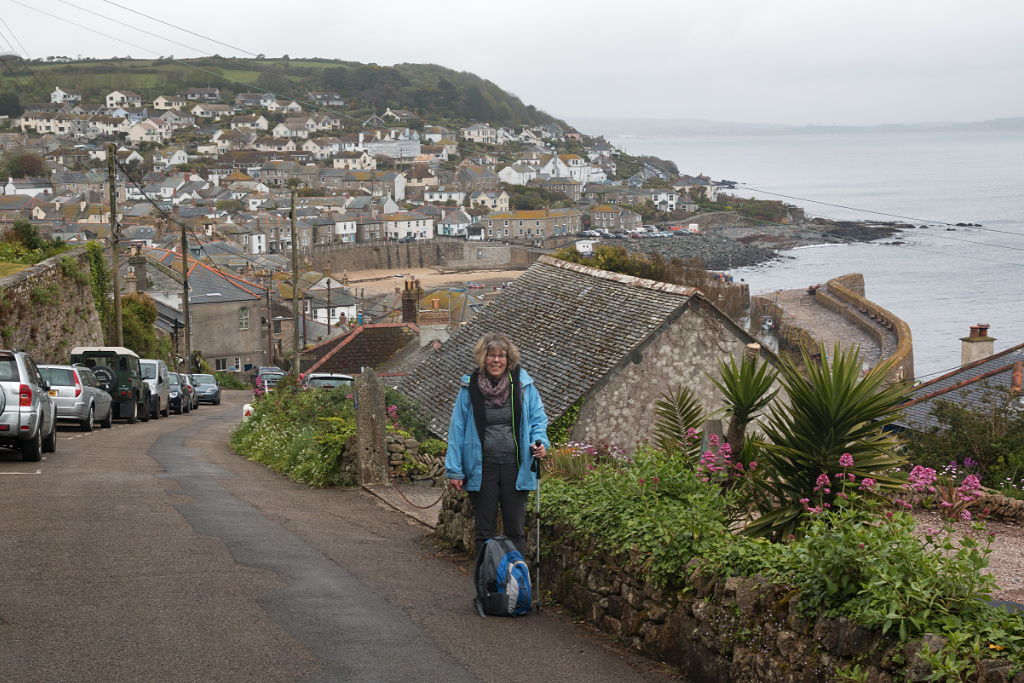 At the top of this road a narrow dirt hiking trail headed away from the paved road onto the coastal cliffs.  In places the trail was very rough, and some sections were outright scrambling.  We were using our hands to climb around huge boulders of granite on steep slopes.  We managed okay, but it was slow going in places, and tiring as well.  Some trail construction in certain places would have helped a lot.  The scenery was outstanding though, with jagged granite headlands, lots of wildflowers, and songbirds singing in the hedgerows. 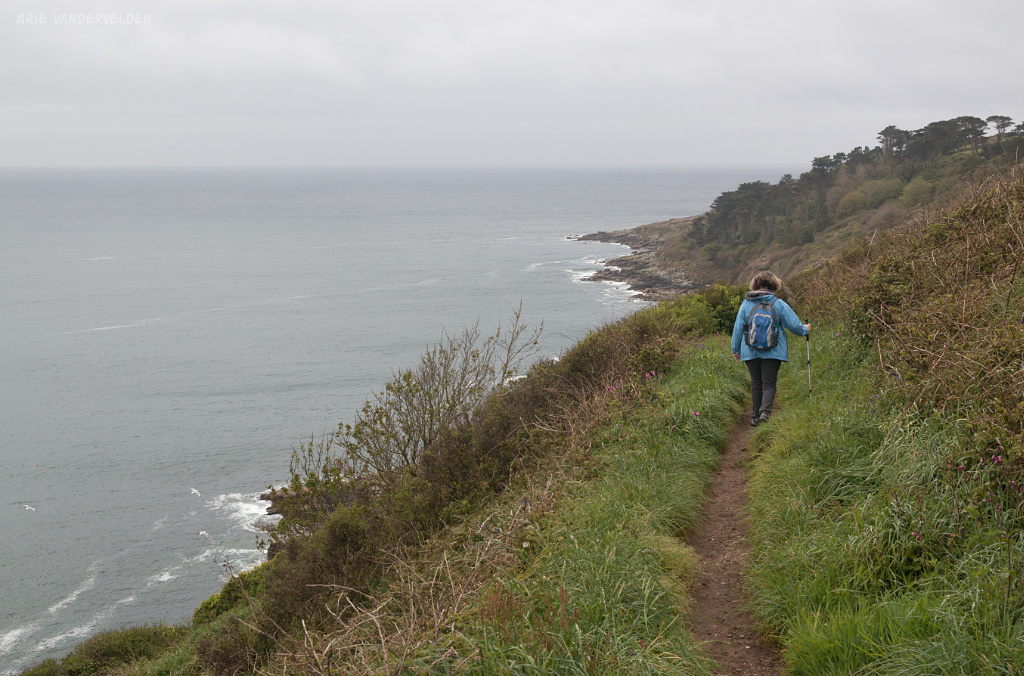 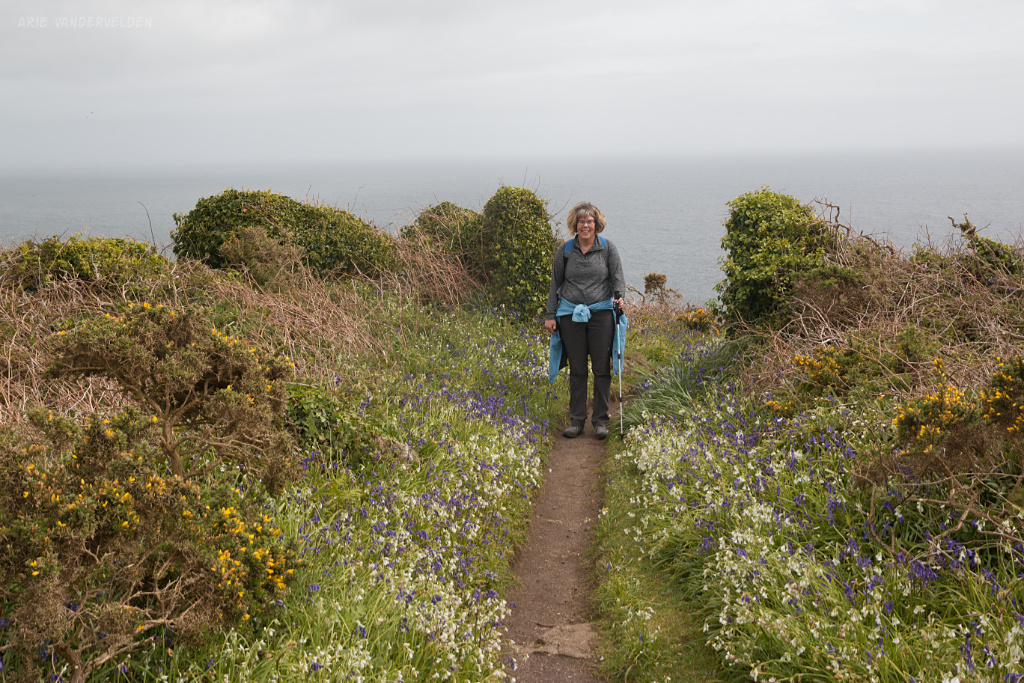 As we progressed down the trail the clouds lifted and the sun was trying (but not quite succeeding) to shine through the clouds.  Soon we were shedding our jackets because it warmed up quite a bit.  At a place called Lamorna Cove we stopped at a nice sunny bench to eat our scones and drink our tea. 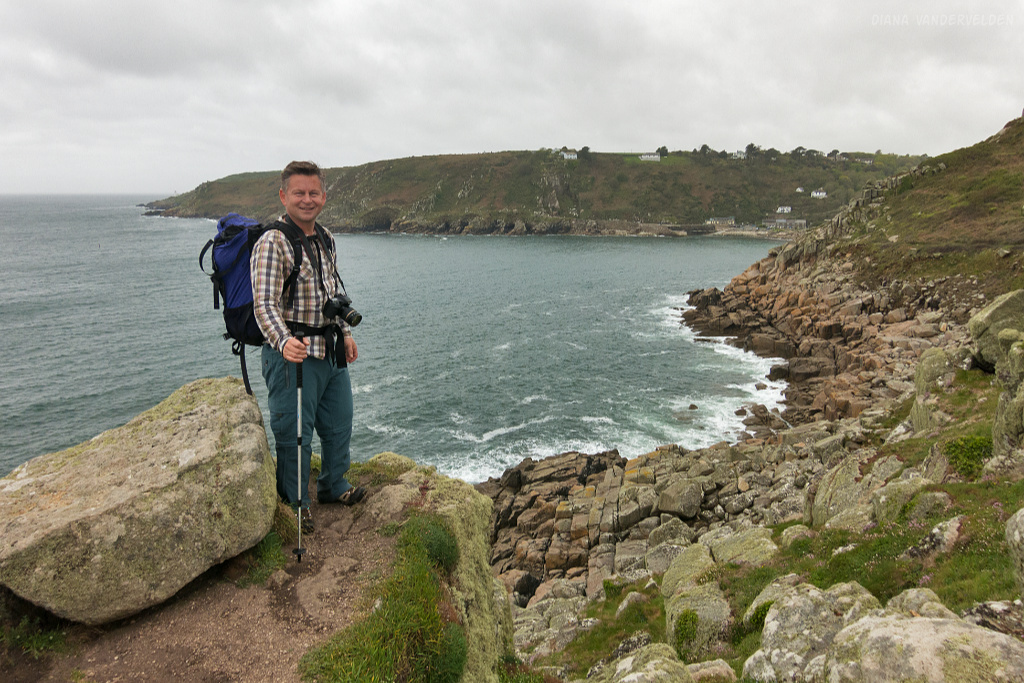 Past Lamorna Cove there was a section with some serious scrambling where trail improvements are sorely needed.  It was followed by an easier section down a jeep track. 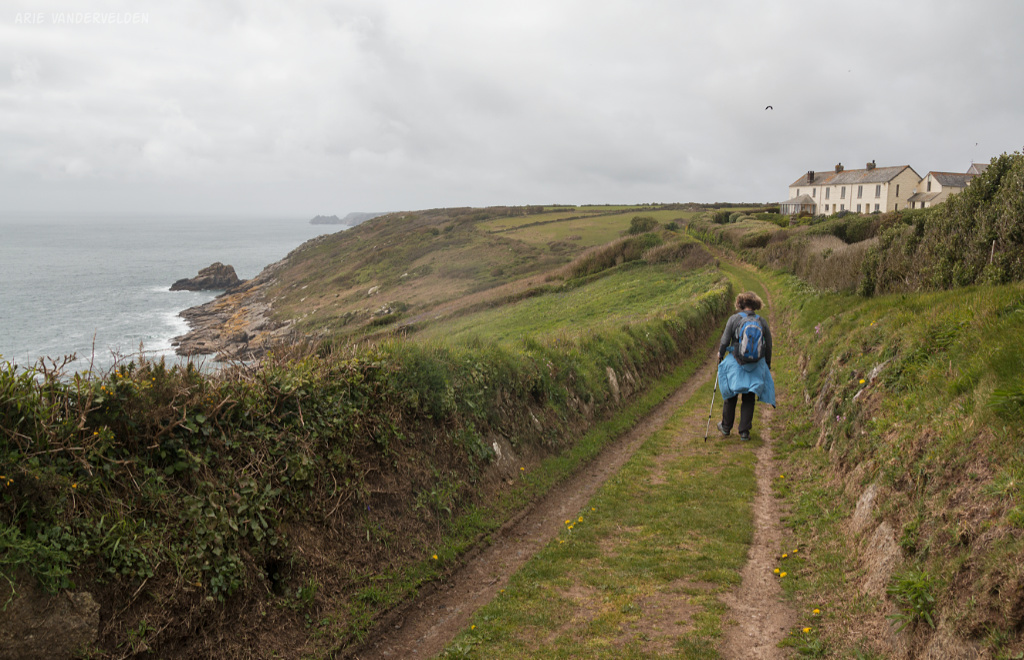 The most scenic part of this stretch was a place called Penberth Cove.  Here, a fisherman’s wife was sitting on a rock beside the slipway, gazing at the sea.  I think her husband was out fishing and she was waiting for him to return safely. 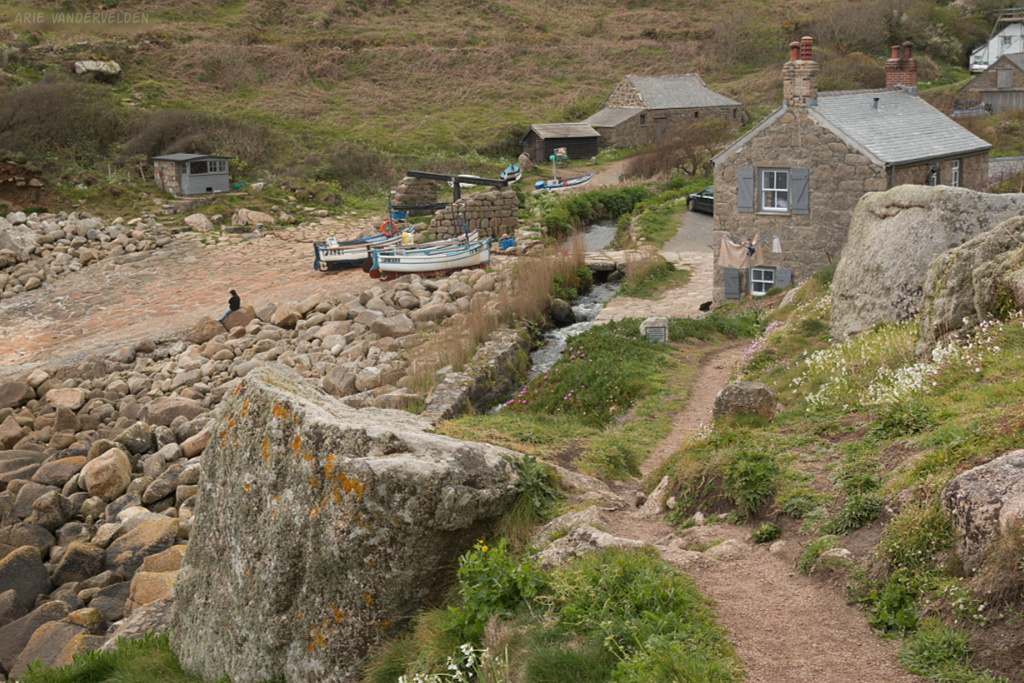 Their house, built out of solid granite, had a collection of beachcombing objects out front. 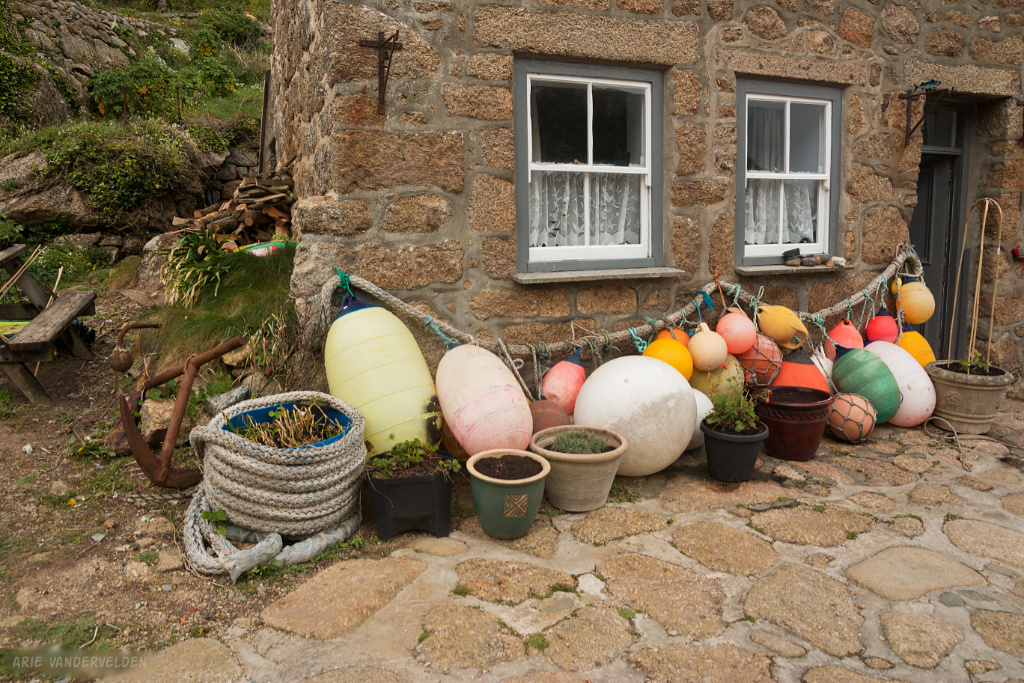 Waiting for her husband to return. 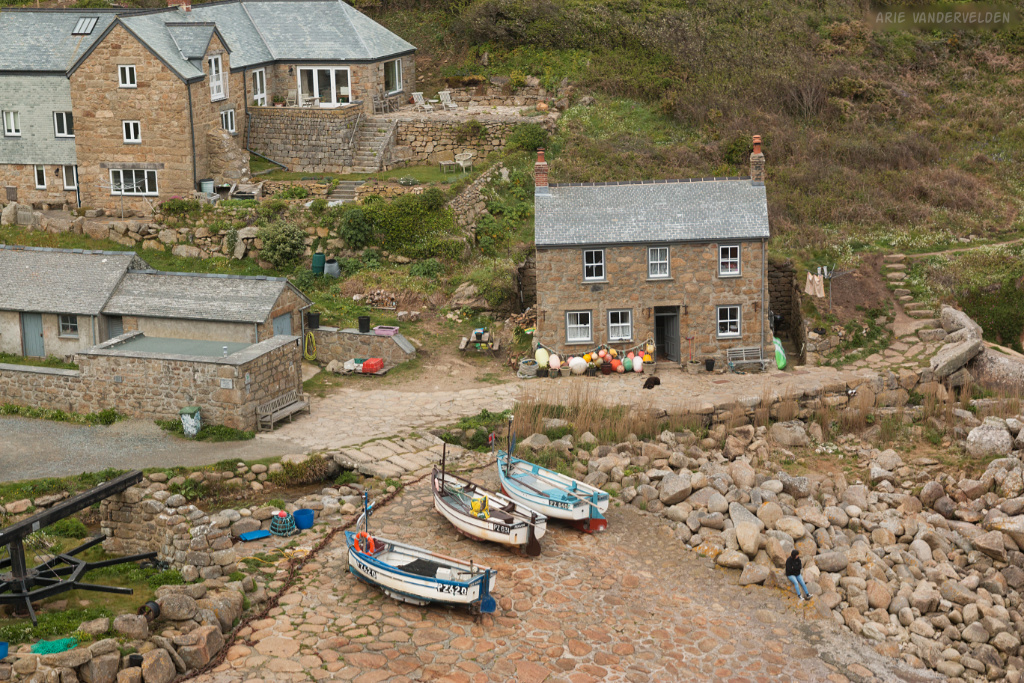 There were a few more steep hills before we made it to our destination for the night: Porthcurno. 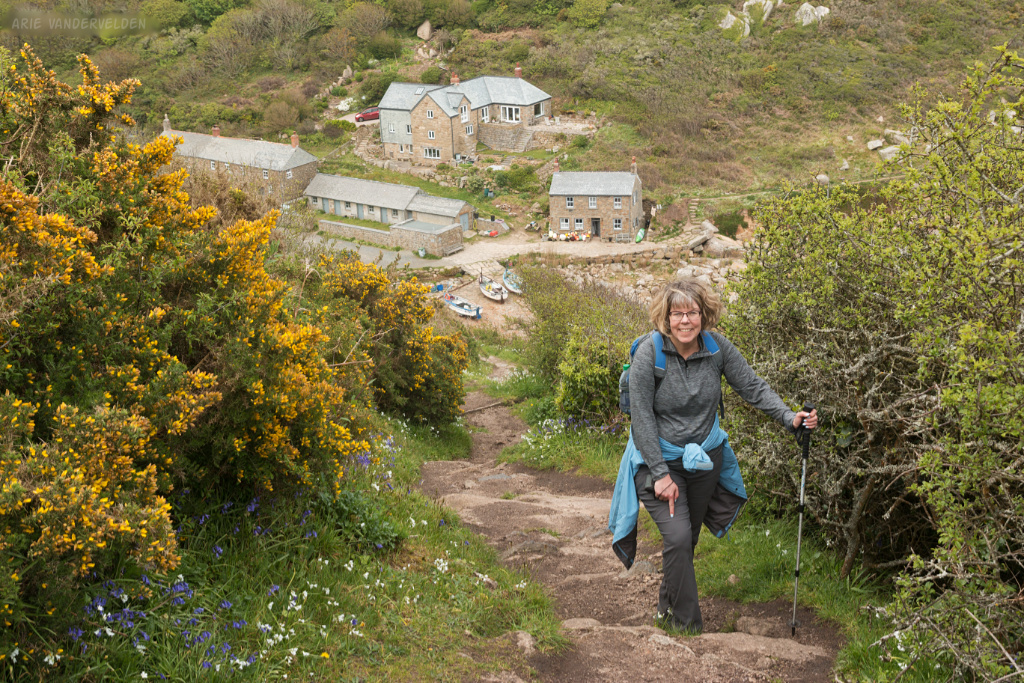 Porthcurno is a small sandy cove, guarded over by several pillboxes built during WW2. 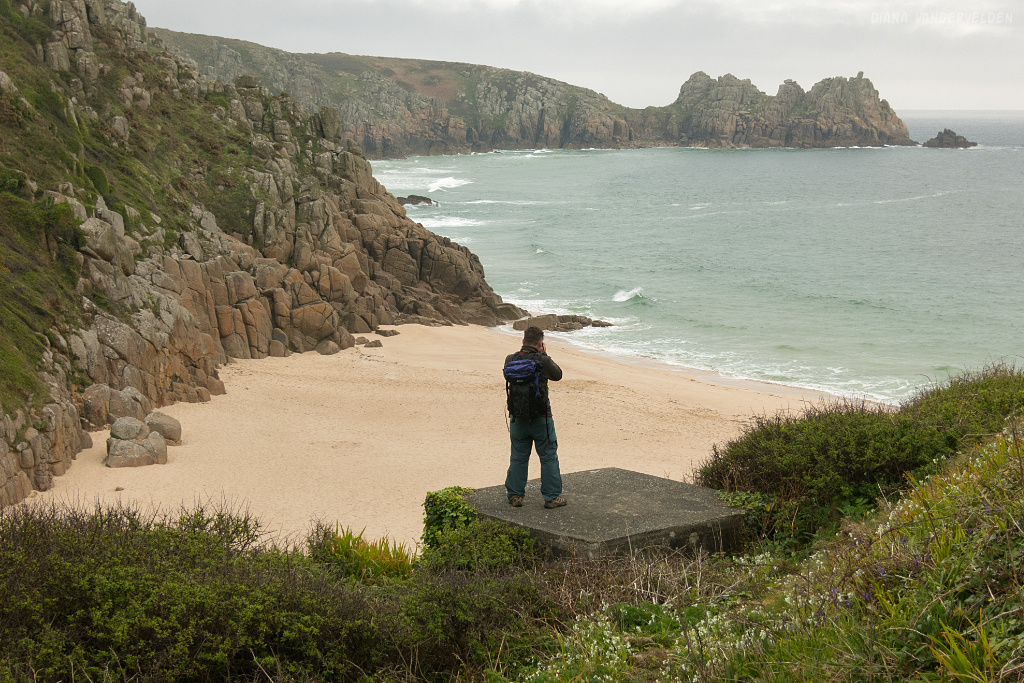 We got to our B&B in Porthcurno at 5:30 pm, pretty tired after hiking just shy of 12 miles our first day out.

The second day was an easier day with just 6.5 miles to cover.  The weather was cloudy but otherwise fine. 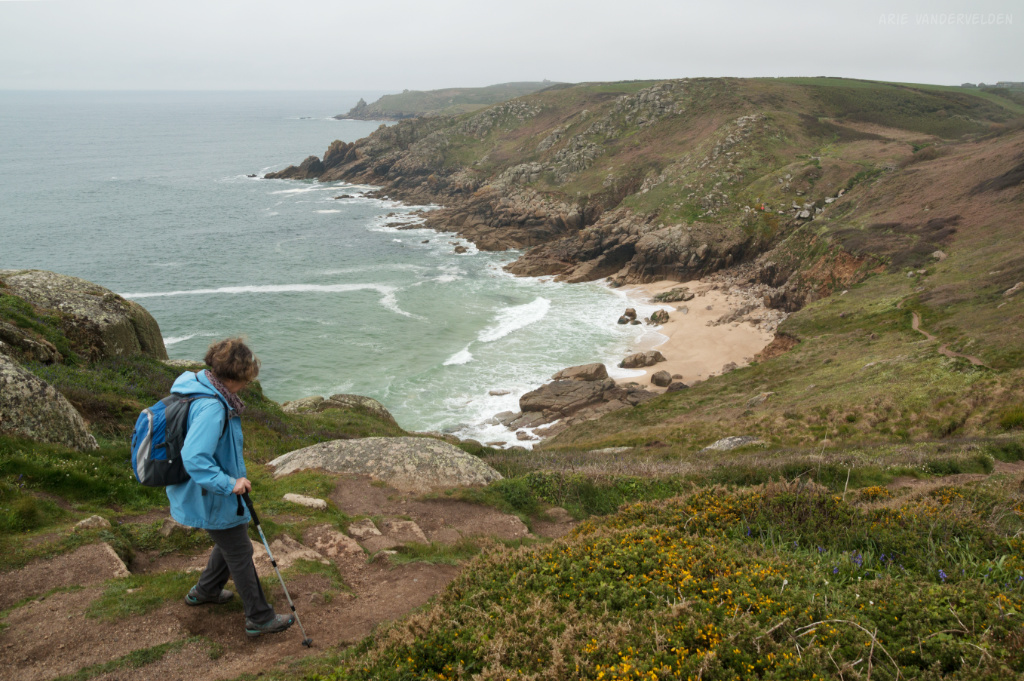 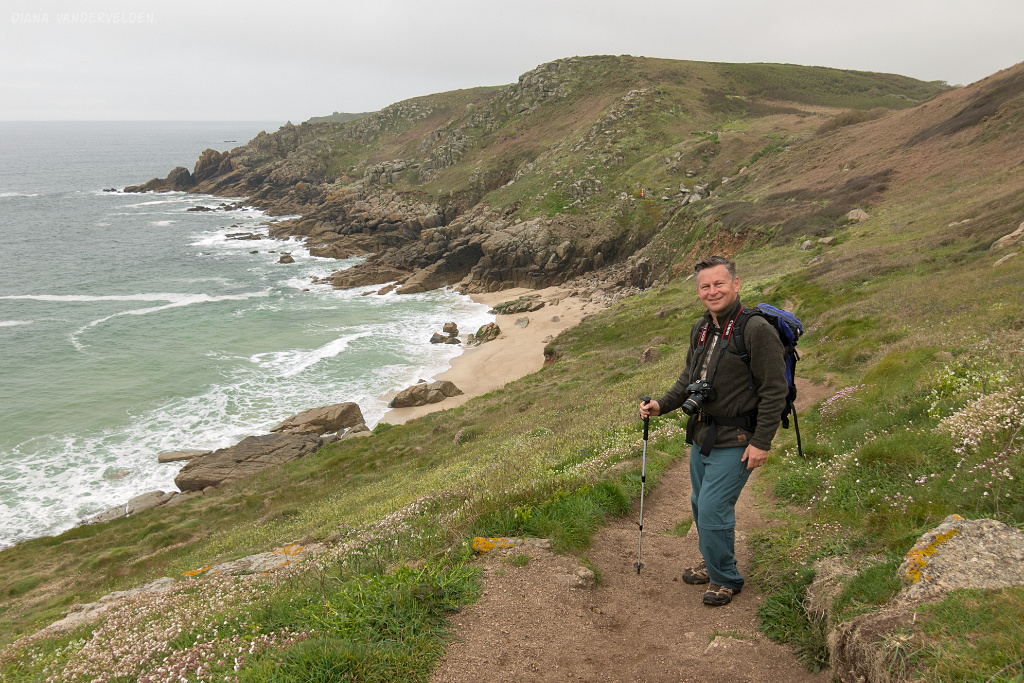 Today we were rounding Land’s End.  The trail went along the edge of the cliffs, and occasionally we had to cross some side valleys that were perpendicular to the coast.  Near Land’s End the clouds thickened and the scenery was quite gloomy.  The vegetation was moorland, mostly dark-green and black heather that has a sombre look to it when it’s not in bloom.  We could see Land’s End from quite a distance away.  There is a collection of buildings, and we could see cars and tour buses come and go from the parking lot.  So after crossing the lonely moors we stumbled into the tourist trap.  We passed a petting zoo, a 4D theatre, and found the pasty shop.  Pasties are a Cornish baked turnover stuffed with meat, potatoes and onions.  They make a great lunch, and we ate ours in a room full of German bus tourists. 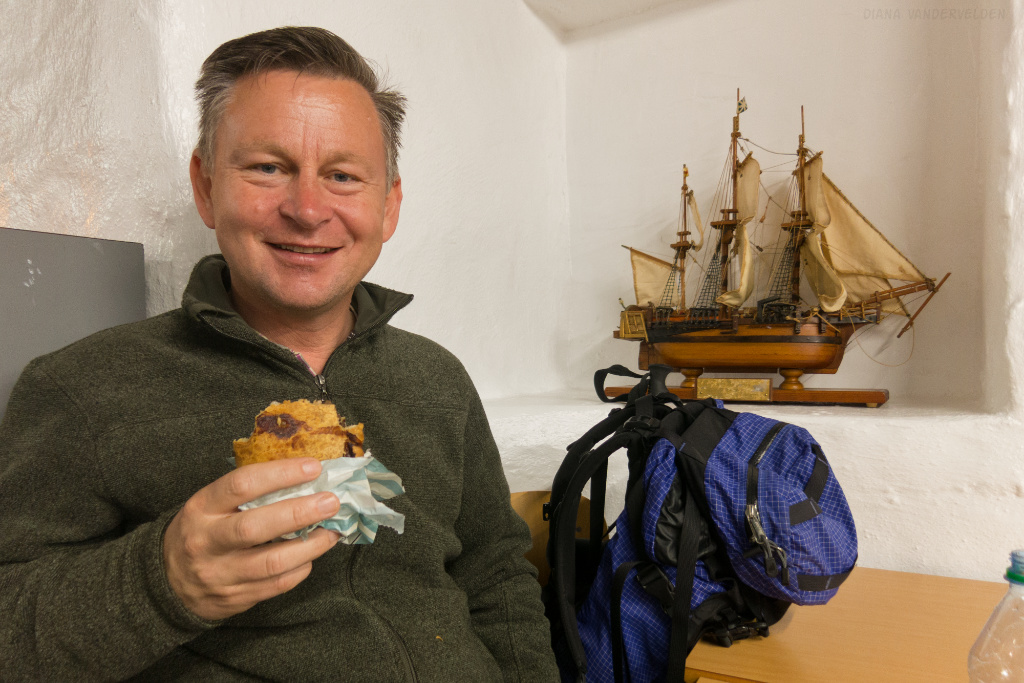 Nearby is the shipwreck of the RMS Mulheim.  It ran aground here in 2003, but not much remains of this ship. 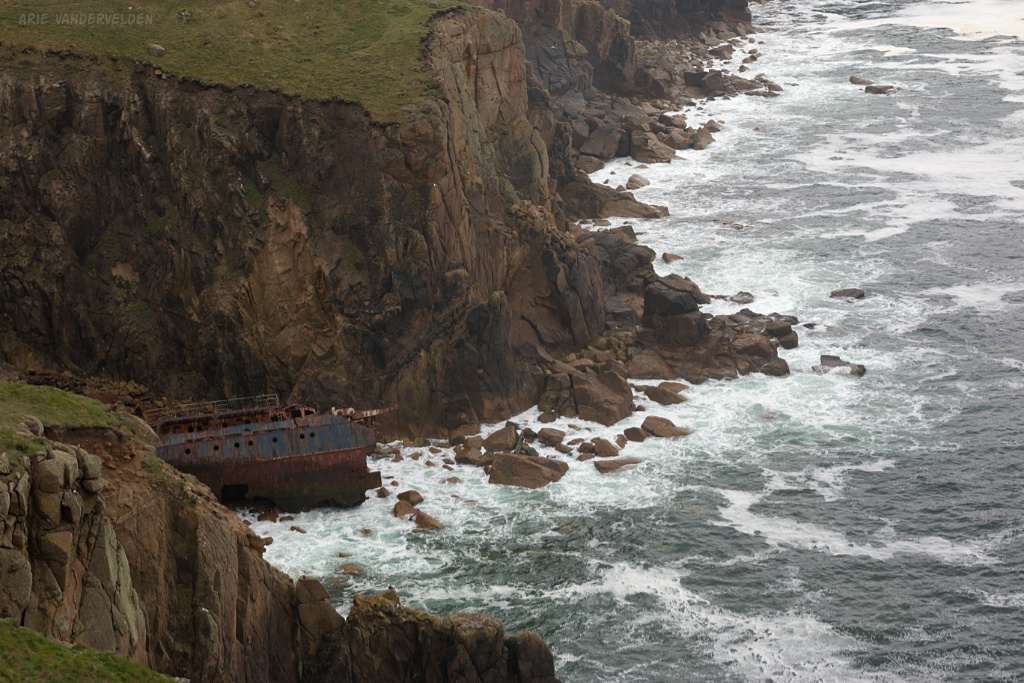 Behind Diana you can see the buildings of Land’s End. 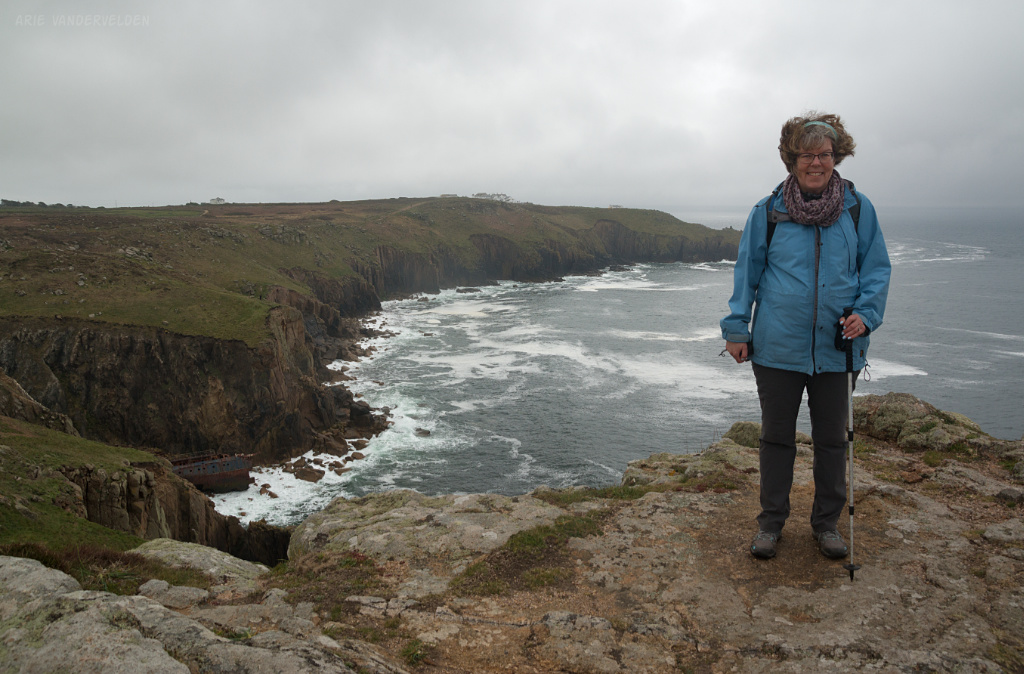 A short distance ahead was a lookout, staffed by a National Trust warden.  We talked to her for a while.  She had a cute border collie puppy, and I enjoyed petting it. 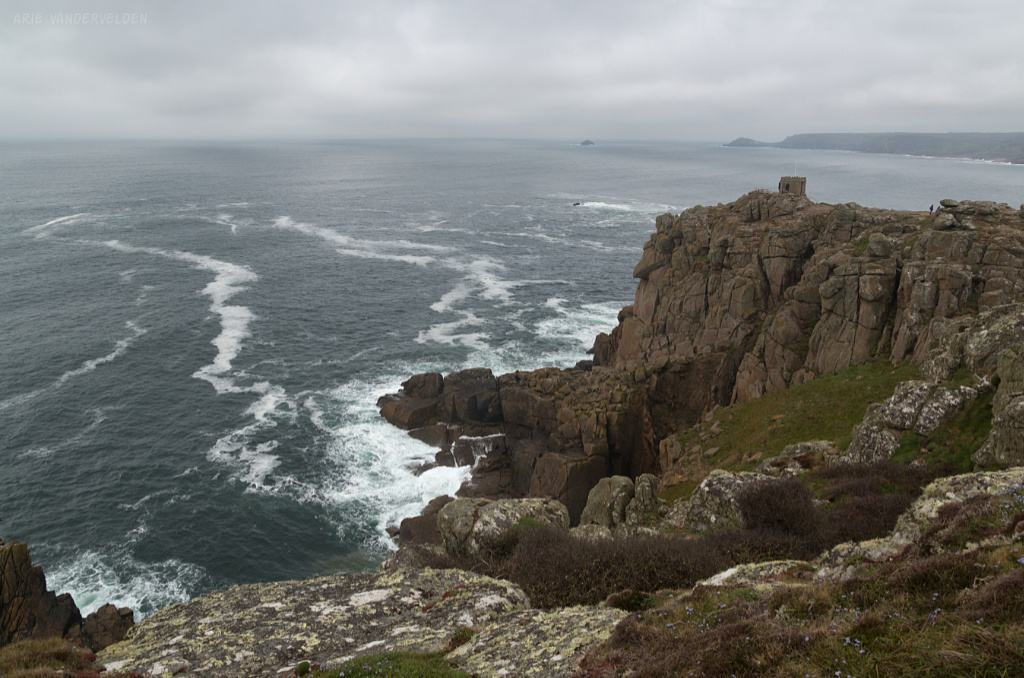 All that was left now was a descent to Sennen Cove. 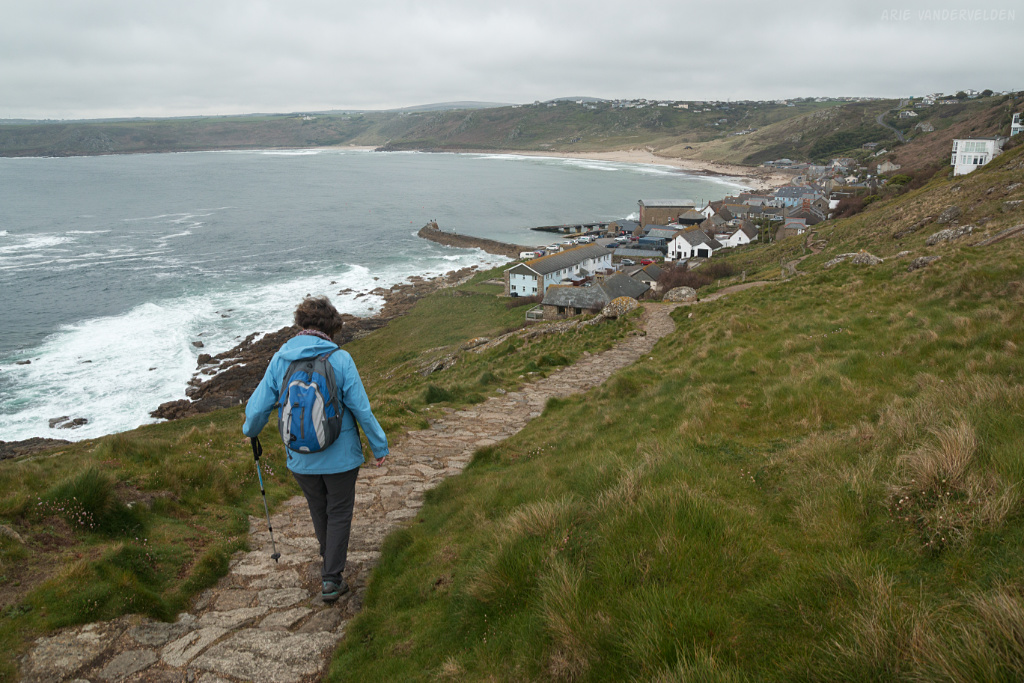 At Sennen Cove we checked into our hotel, where our bags were waiting for us. 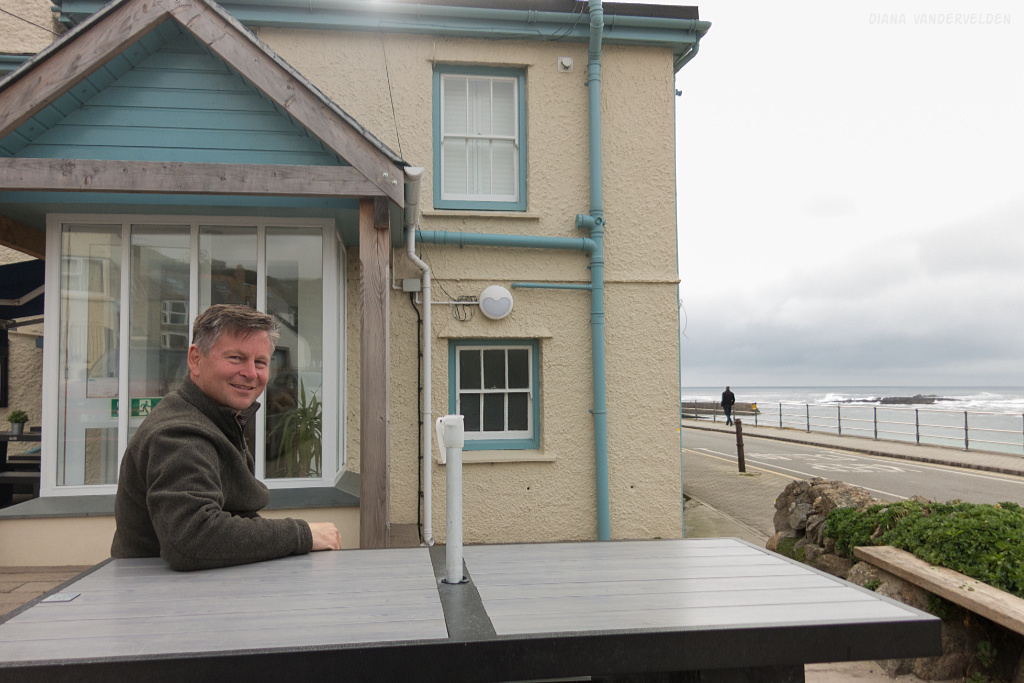 Continue to part two of our Cornish hike.

Penzance is about five hours by train from London.  The fast intercity to Plymouth takes three hours, and then the local milk-run train to Penzance is another two hours. 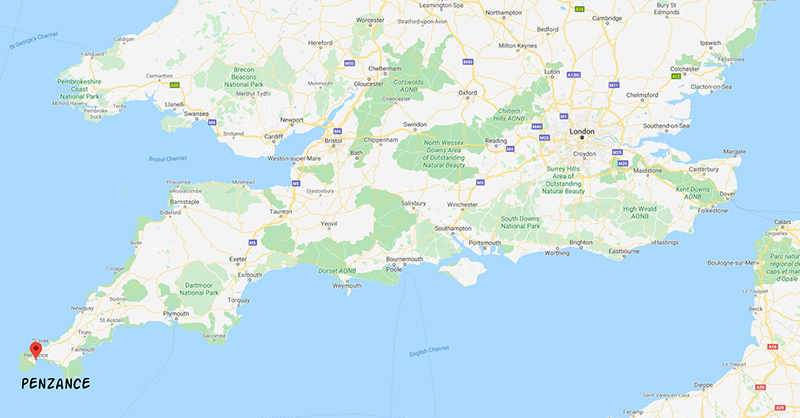 There are a number of YHA hostels along the Cornish north coast.  You may be able to save some money by staying there, although for doubles a B&B is comparable in price in many cases.

Penzance to Porthcurno is about 12 miles, and Porthcurno to Sennen Cove is about 6.5 miles.  There are difficult sections where the trail is narrow, rough, exposed, and where there is some scrambling on granite boulders.

Here is some information on the Southwest Coast Path.  Here is my blog post on how to organize a multi-day hike in Britain.  We hiked the trail in late April and May of 2019, and we generally had good weather.  Over the course of 12 days we hiked from Penzance to Padstow, a distance of 107 miles.  According to the day-by-day guide on the southwest coast path website, this itinerary can be hiked in 9 or 10 days.  Be aware that this will include some very long days, and we met some very exhausted hikers who followed a faster itinerary.  If pressed for time I would suggest hiking from St. Ives to Padstow.  This itinerary is 66 miles long and can be done in 6 or 7 days. 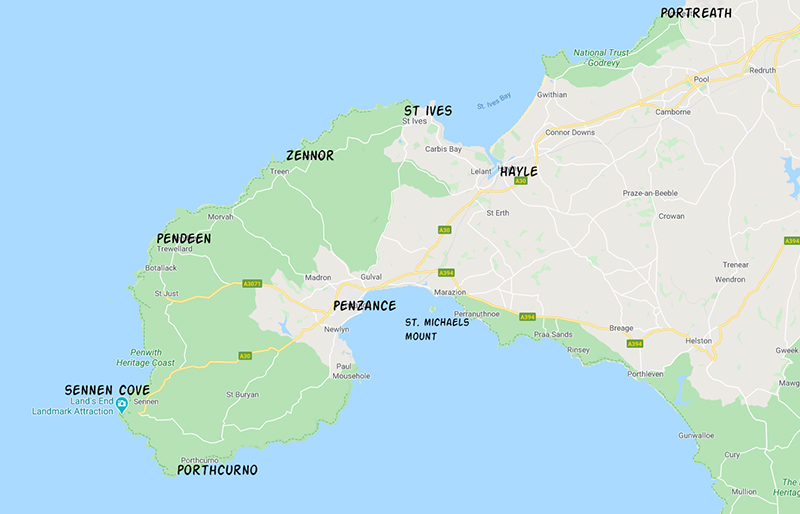