In part 2 of our hike we arrive in St. Ives.  St. Ives is a quaint little town with cobblestoned streets on a spit of land jutting out to sea.  It’s a place where whitewashed little cottages have seagulls nesting on their slate roofs.  If you eat a pasty and don’t watch out, the seagulls will swoop down and steal your lunch.  It’s the kind of place where the pubs have low ceilings, and you have to duck to avoid banging your head against the ceiling beams that are painted black . It has well-heeled tourists who browse little galleries, and there are many tea rooms dishing up scones with jam and clotted cream.

We stayed in St. Ives for two days, using it as a base camp for a dayhike to Hayle.

The Bristol Channel is said to have the second-largest tidal range (after the Bay of Fundy), and St. Ives harbor falls completely dry at low tide.  It’s as if someone pulled the plug of the bathtub.  Fishing boats, dories, and small boats sit perched on the yellow sand. 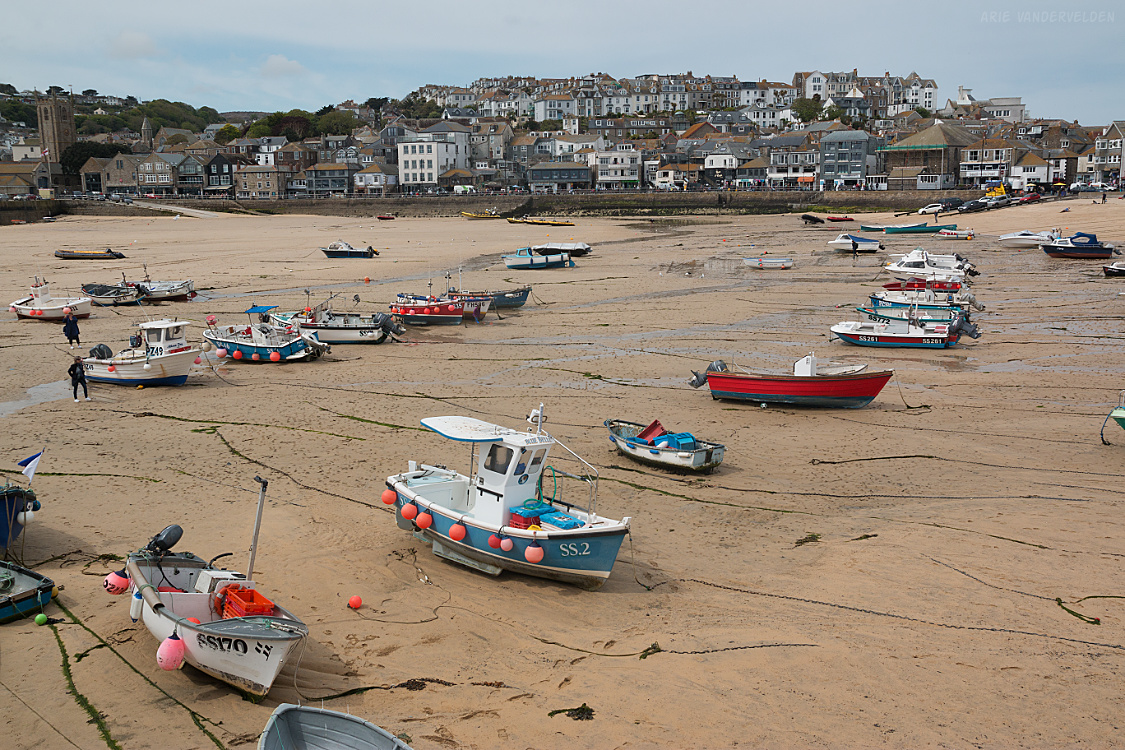 We walked right across the harbour to the next bay, where we picked up the coastal path.  It led up to a headland where there are some very fancy mansions, making it easy to see why this area is often referred to as “the Cornish Riviera.” 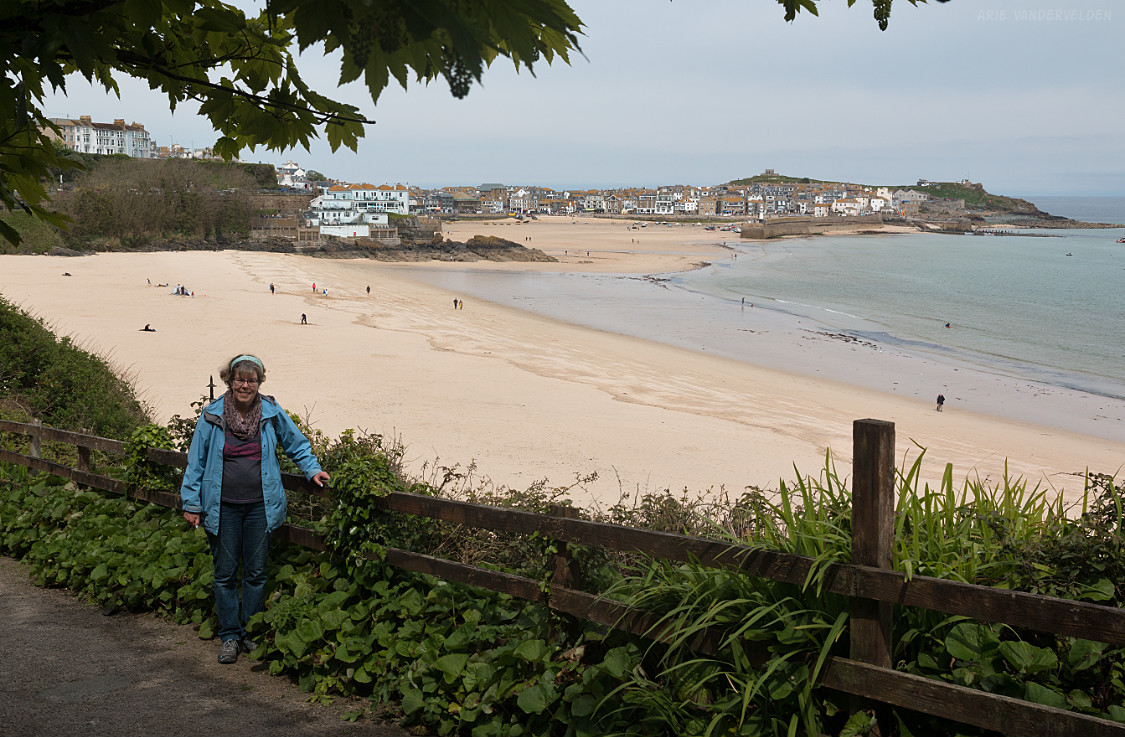 On the other side of the headland is Carbis Bay.  We crossed the railway line on an overpass to get to the beach.  This railway is a spur line that has been used since Victorian times to shuttle tourists to St. Ives. 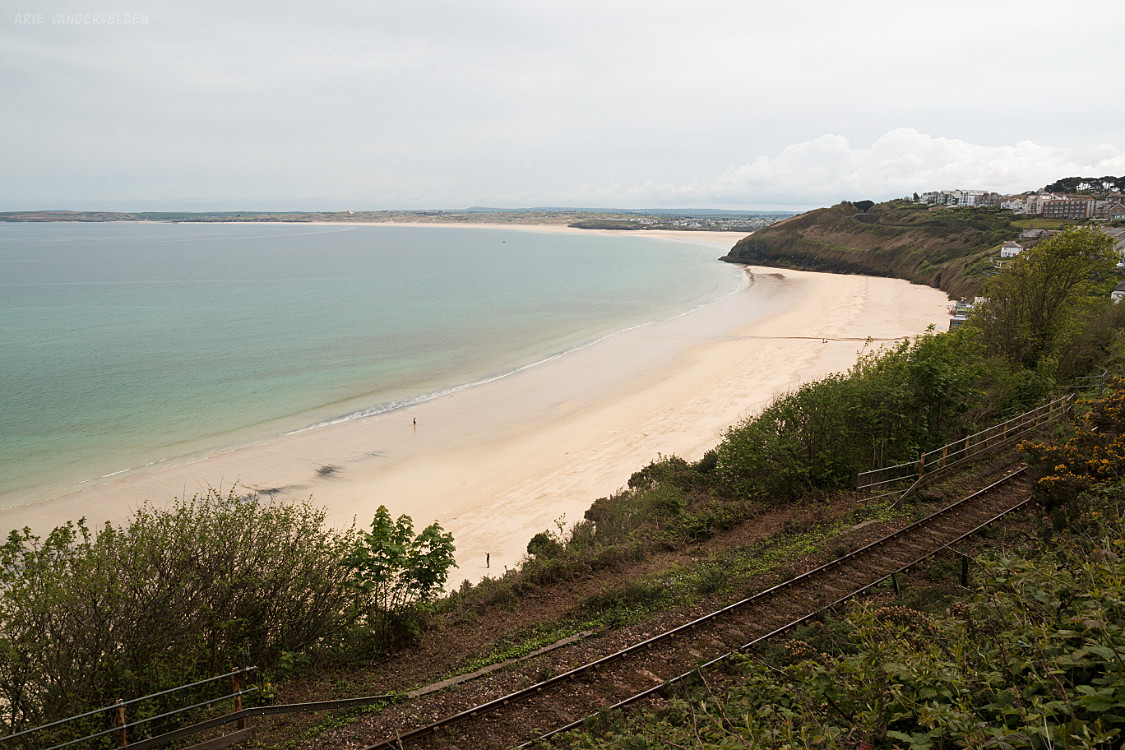 We had a cup of tea and a scone on the beach.  Thus fortified we plodded on, across the next headland. 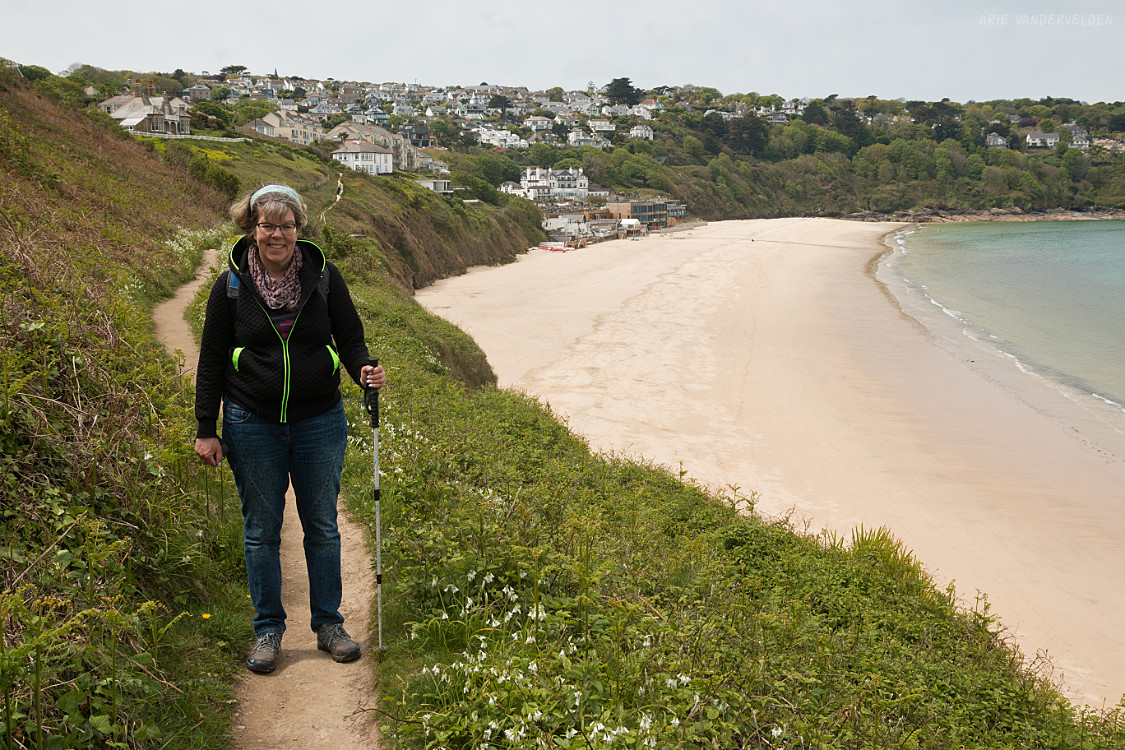 Around the next bend we had a great view of the Hayle estuary.  There is a lot of sand at low tide. 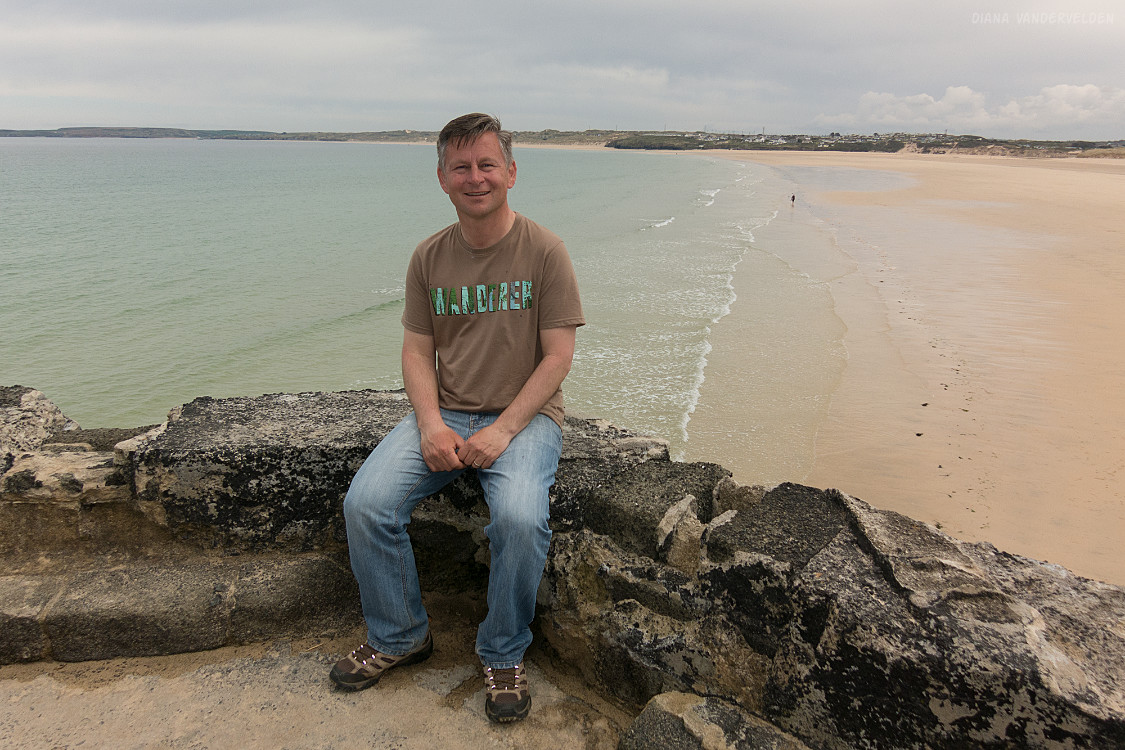 We left the coastal path, scrambled down some slippery rocks, and started hiking on the sand. 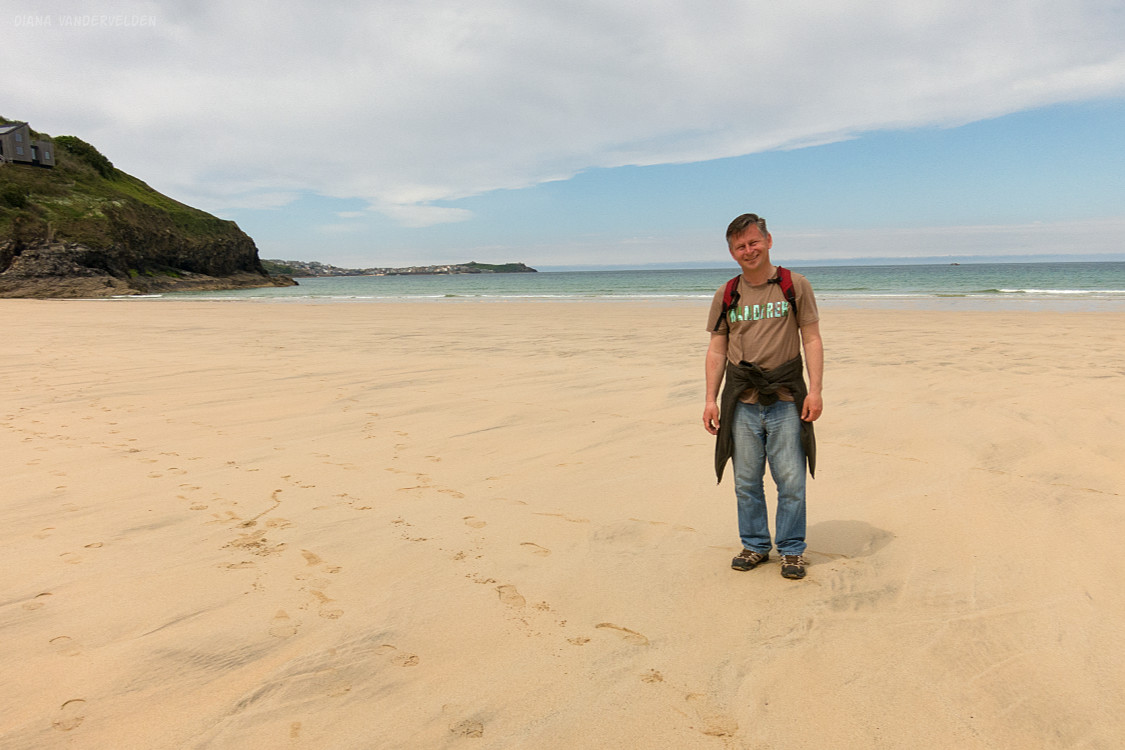 We walked inland, upstream, along the river.  Where the beach petered out there was an obvious trailhead, and we walked along a country road to St. Uny’s Church.  We talked with some local church ladies who were having a bake sale. 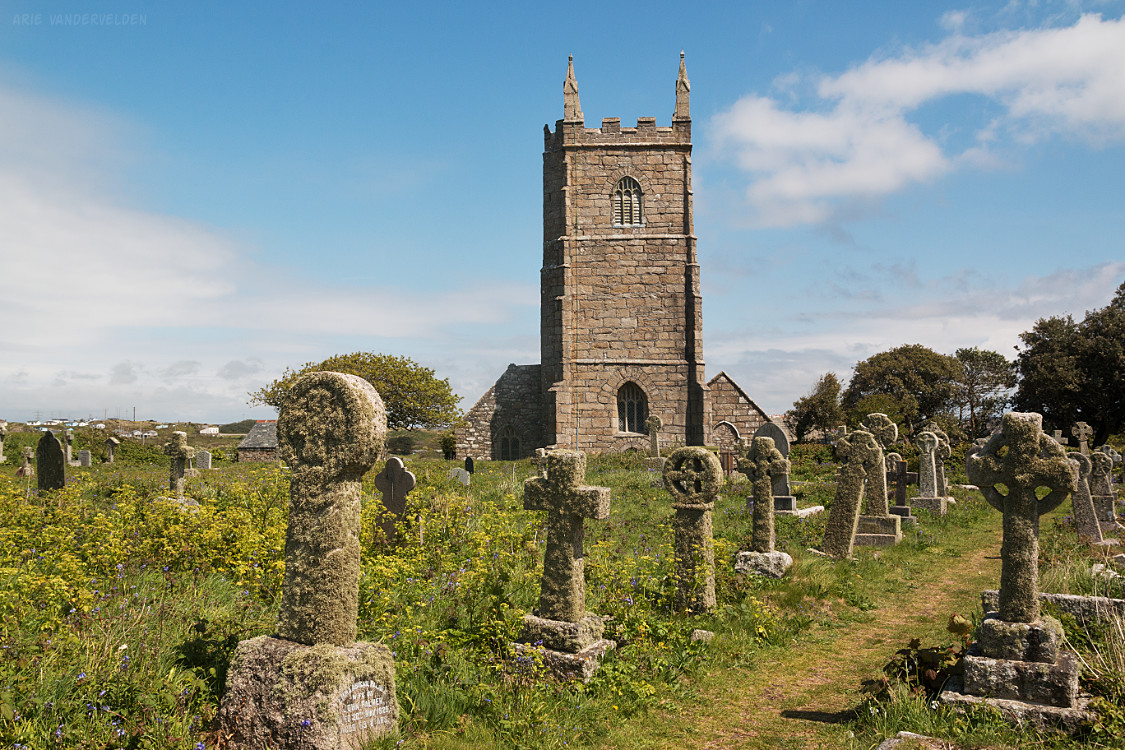 We walked along some more small country roads to the village of Lelant, and then to Lelant Saltings just outside of Hayle where we found a train station.  The train whisked us back to St. Ives in just a few minutes. 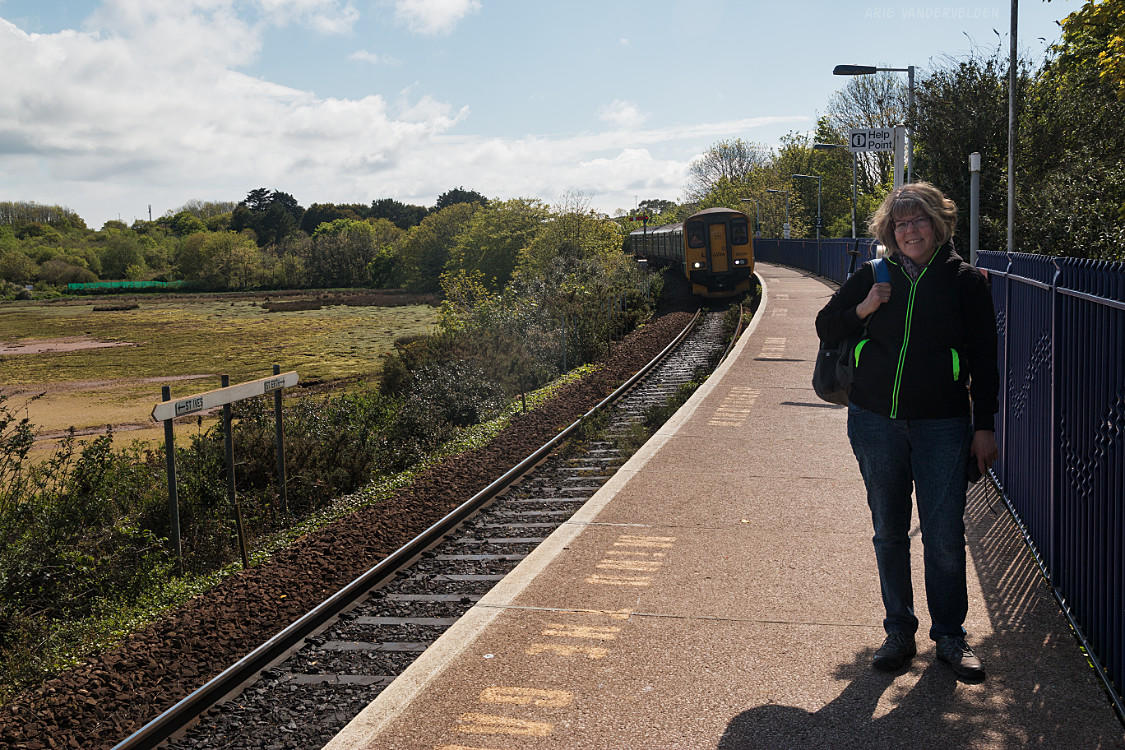 The next morning we took a bus to Hayle, so that we could continue on from where we left off.  In Hayle we crossed a bridge, hiked through a holiday park, and found a way down to the beach. 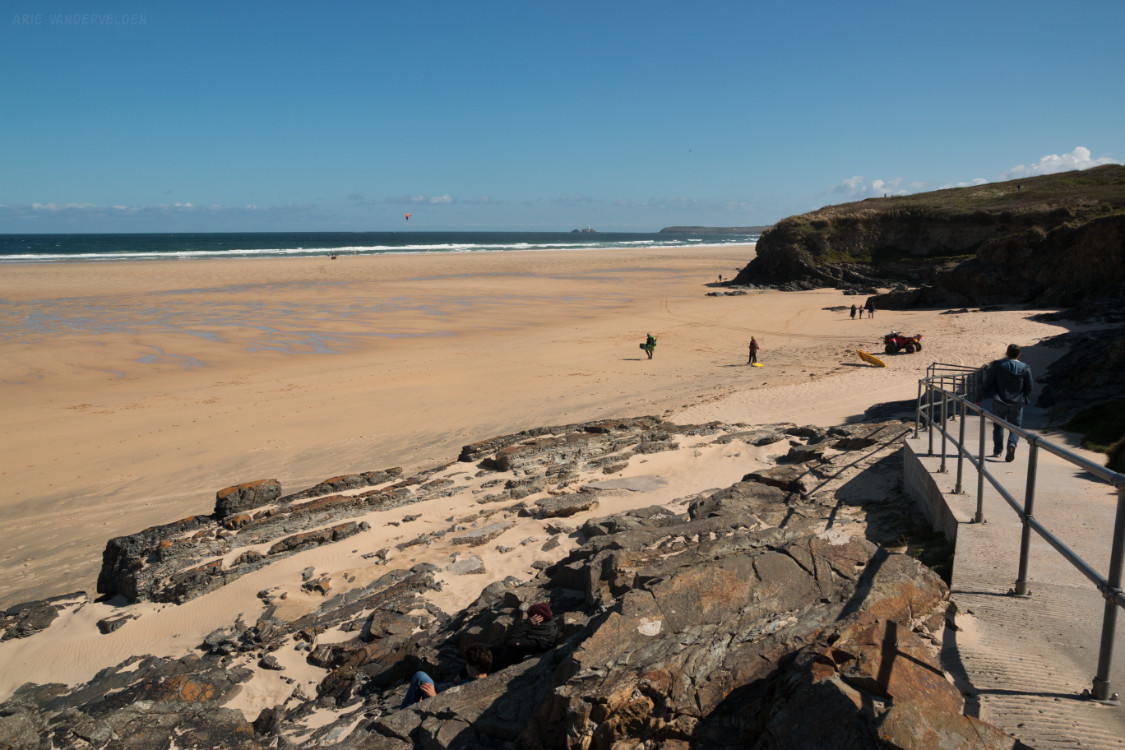 There is a huge tidal range in this area.  At low tide the beaches are gigantic and the surf is far away. 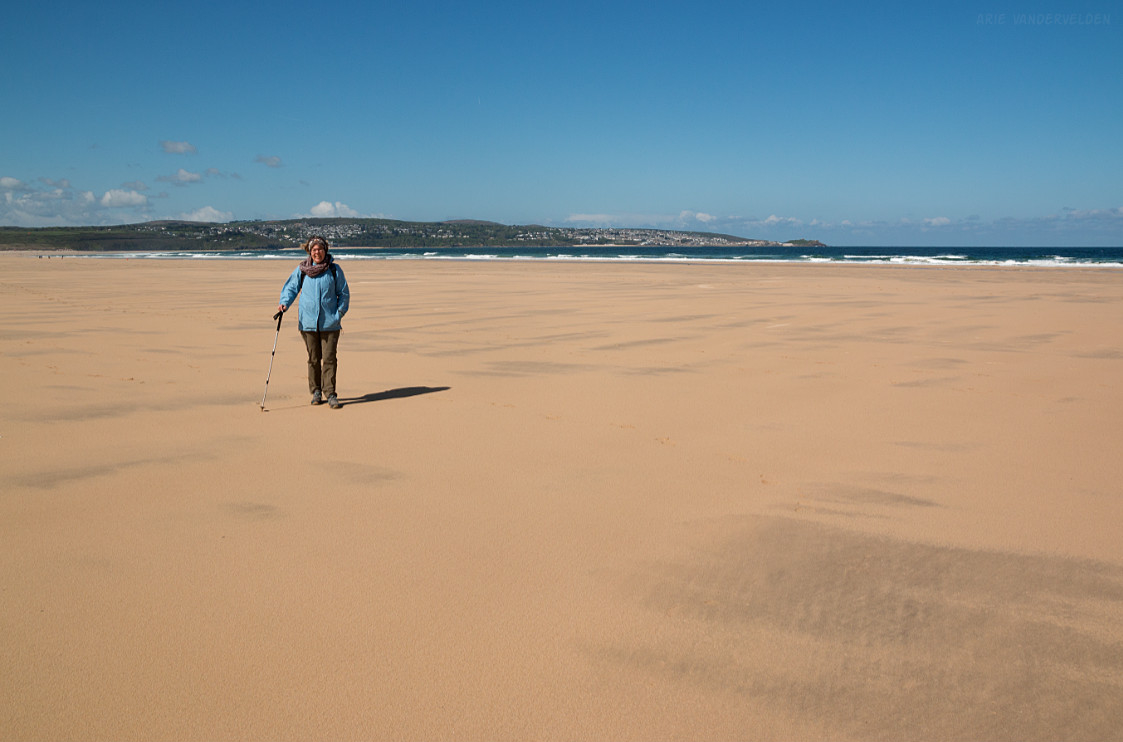 Gwithian Beach is several miles long, and we walked towards the northeast. 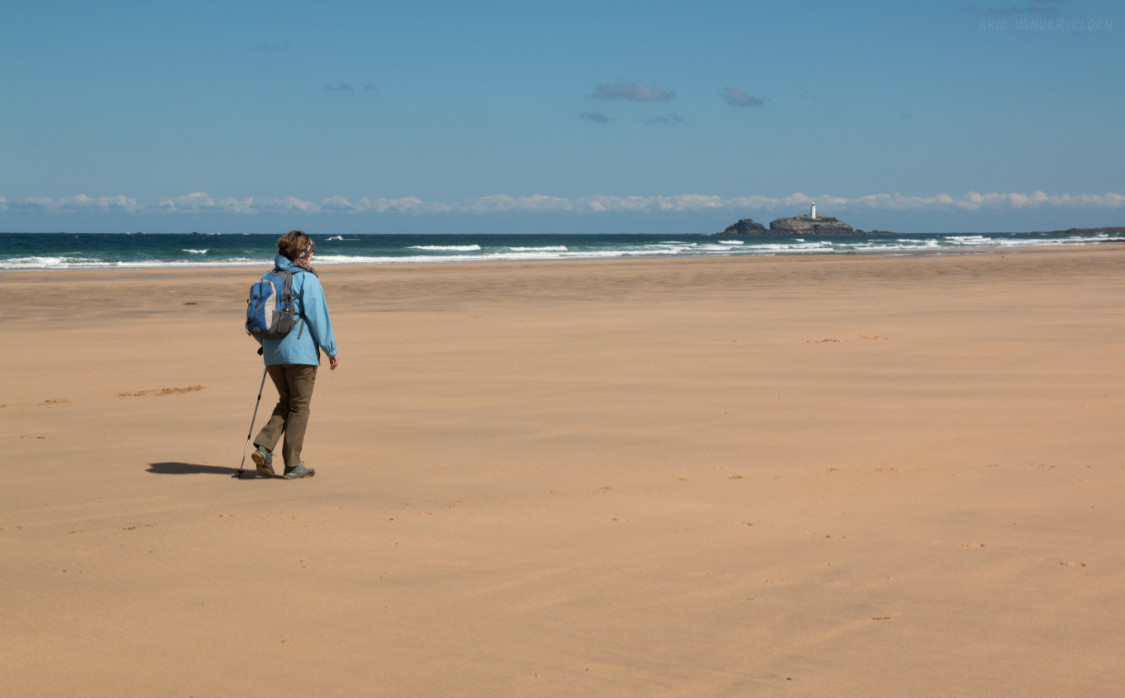 At the far end of the beach, just offshore, is a small island with a lighthouse on it.  Godrevy Lighthouse is said to have inspired Virginia Woolf’s book “To The Lighthouse” which she wrote in 1927 when living in St. Ives.  I bought a copy at a tourist shop in St. Ives, figuring it to be a good souvenir of the area.  I gave this book a good whirl, but I found the writing to be awful.  Each incoherent sentence rambles on for at least half a page, encompassing a variety of disconnected thoughts and irrelevant details.  After plowing through 50 pages I could take it no more and put the book away.  I guess I hold an unpopular view of this book, because it’s often listed as one of the top English literature novels of the 20th century.

Past Gwithian Beach the trail goes around a headland.  In the morning it had been very windy, and now in the afternoon the wind had picked up even more, sending frothy waves crashing against the rocks below. 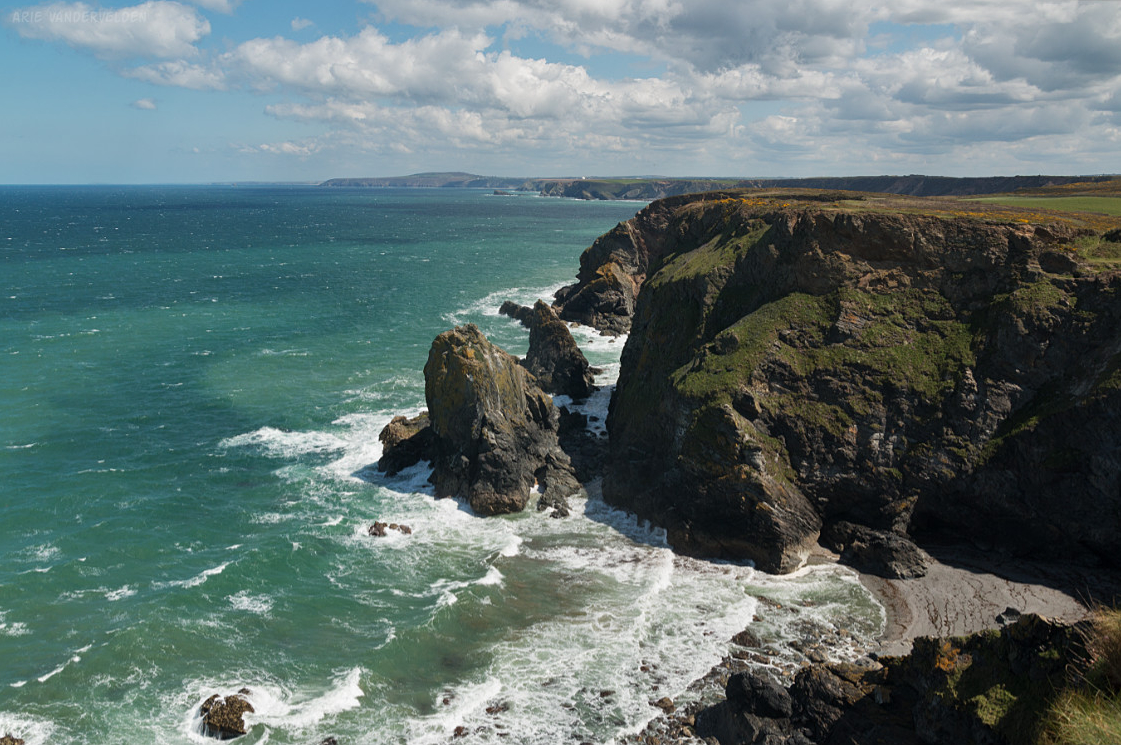 There was a stand of gorse which was a particularly bright shade of yellow. 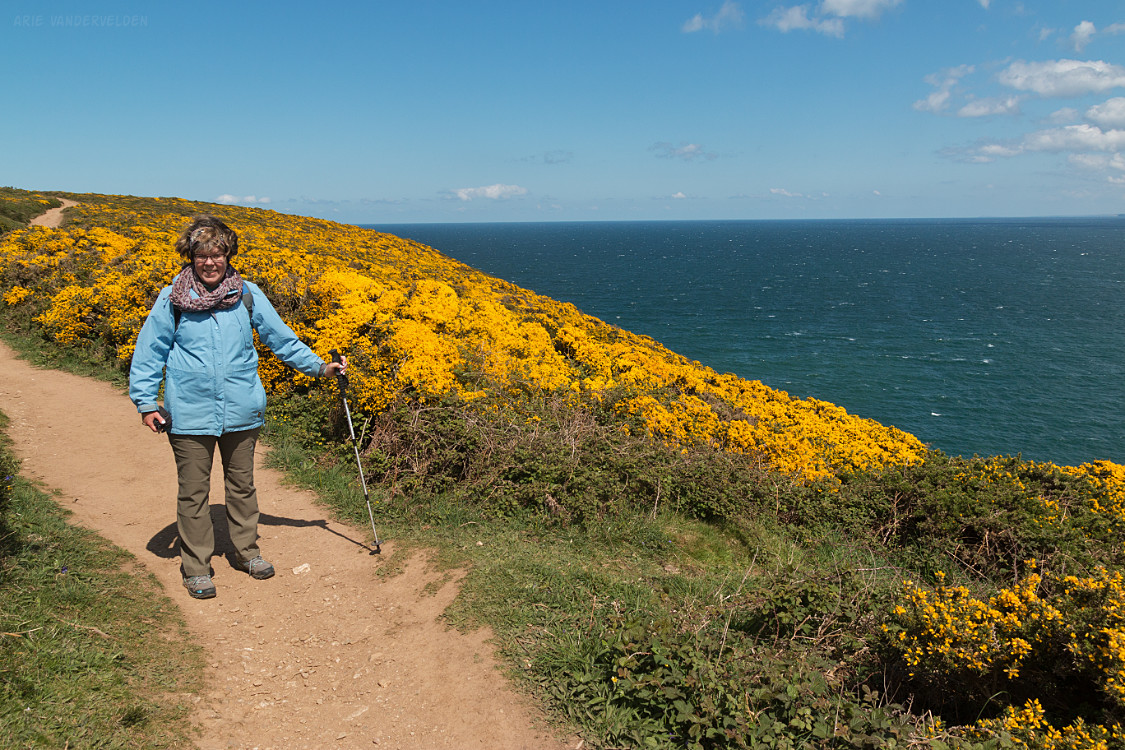 The next section followed the top of the escarpment, paralleling a country road.  The hiking here was pretty easy, compared to the side-hilling the previous week in the areas with granitic rock.  The trail was also in much better shape, and we made quick progress. 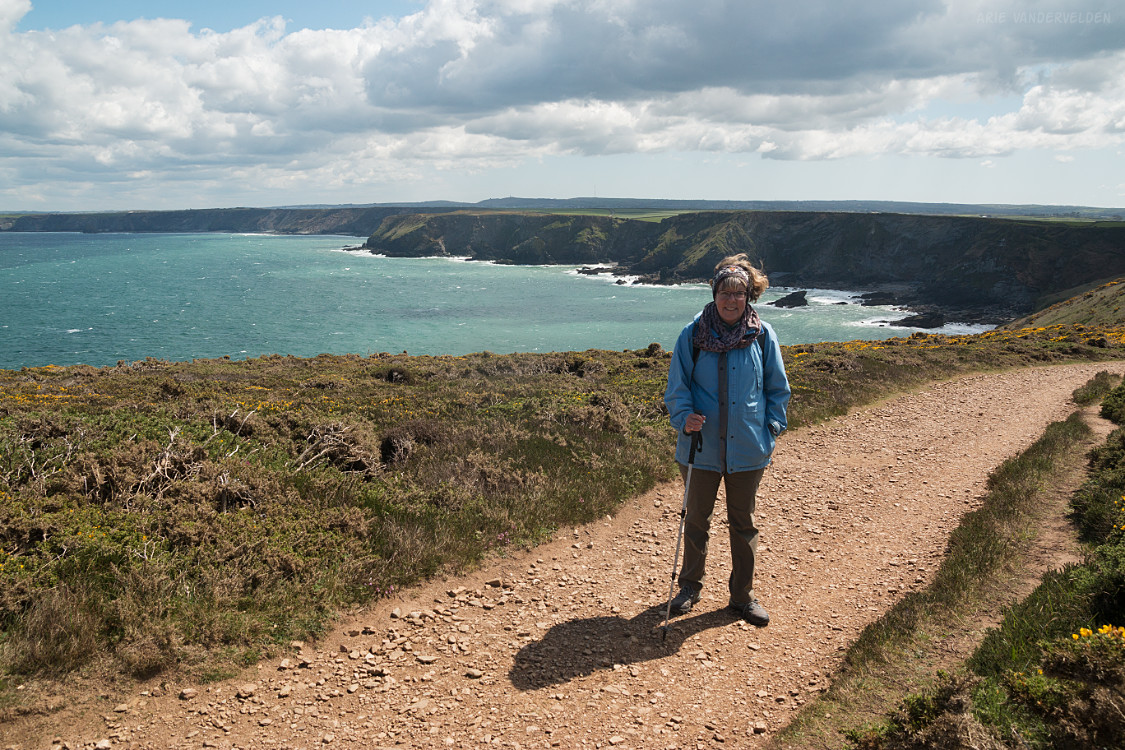 We descended to Portreath, our stop for the night. 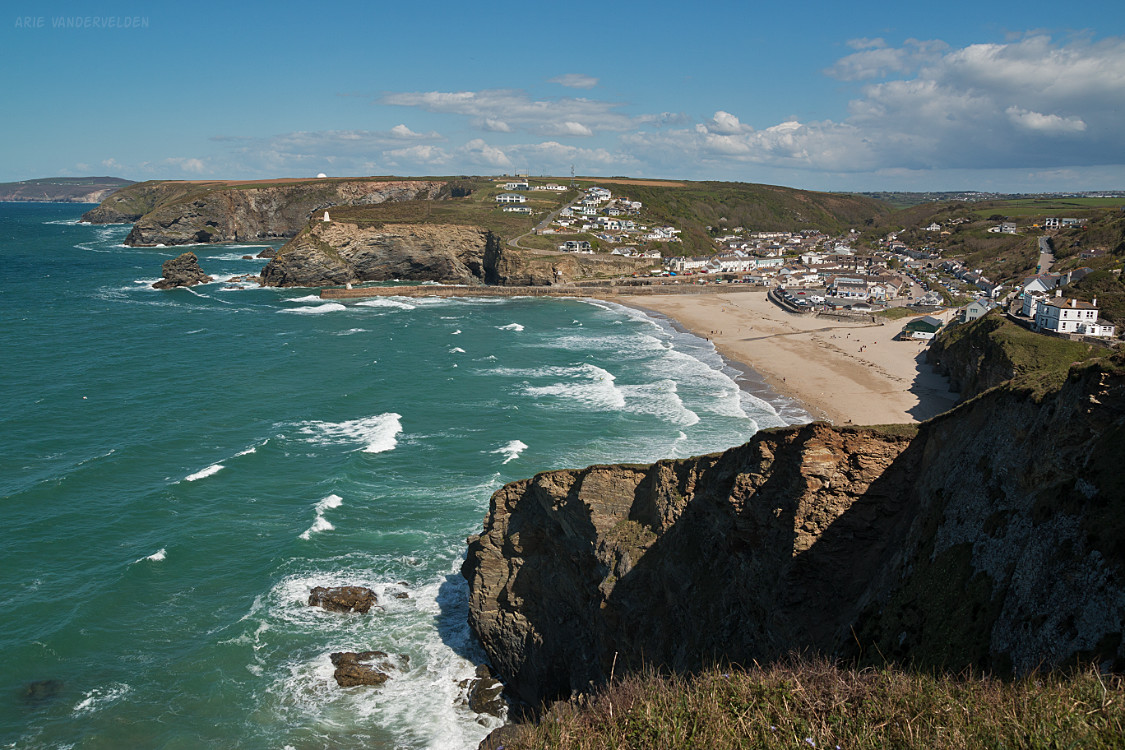 Just part Portreath is an RAF airforce base.  Here, the trail is wedged between the edge of the cliffs and some pretty serious razor-wire fencing.  This imposes some strenuous ups-and-downs in places. 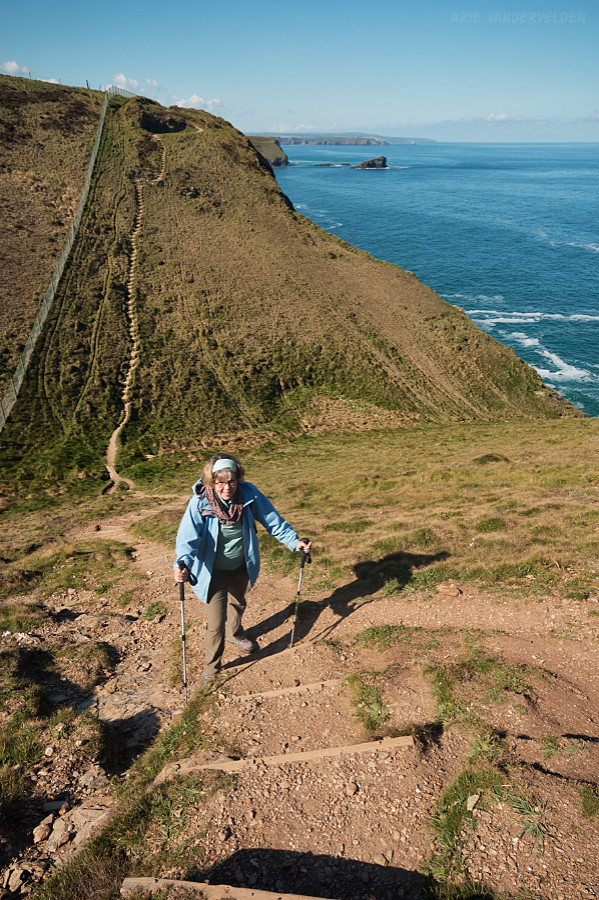 The scenery, however, was stunning. 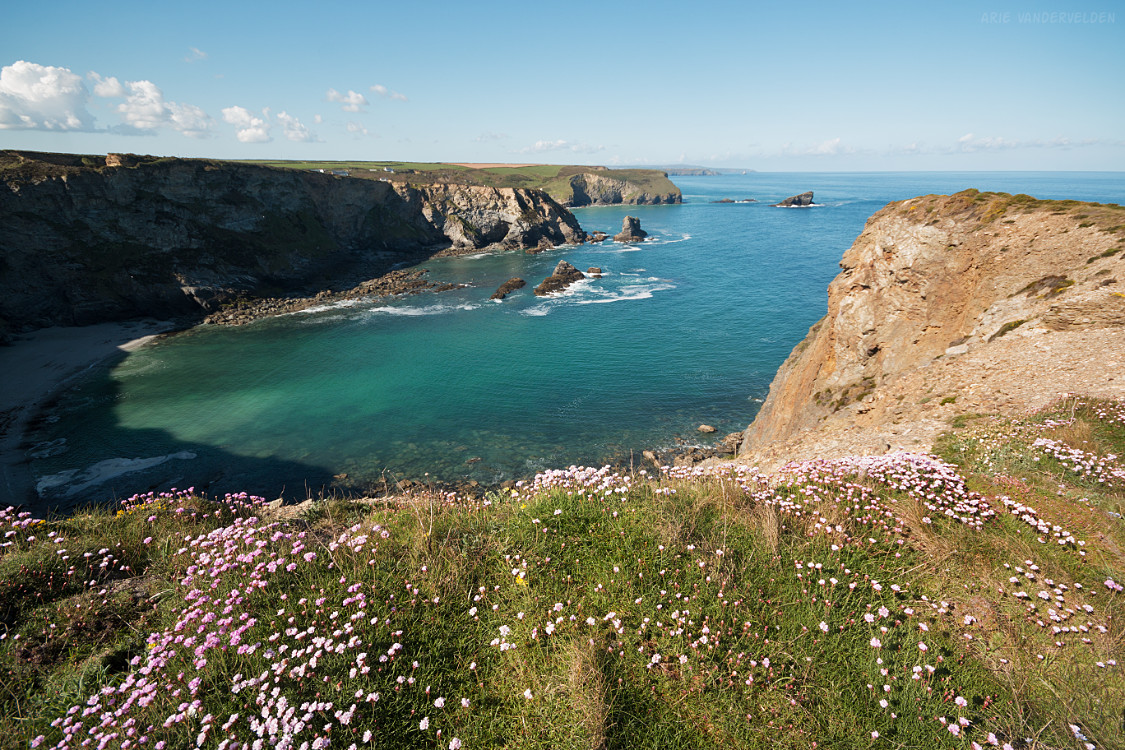 The weather held as the day progressed.  At Porthtowan beach, the brilliant sunshine turned the sky a bright blue, the sand a reddish yellow, and the sea a deep azure blue. 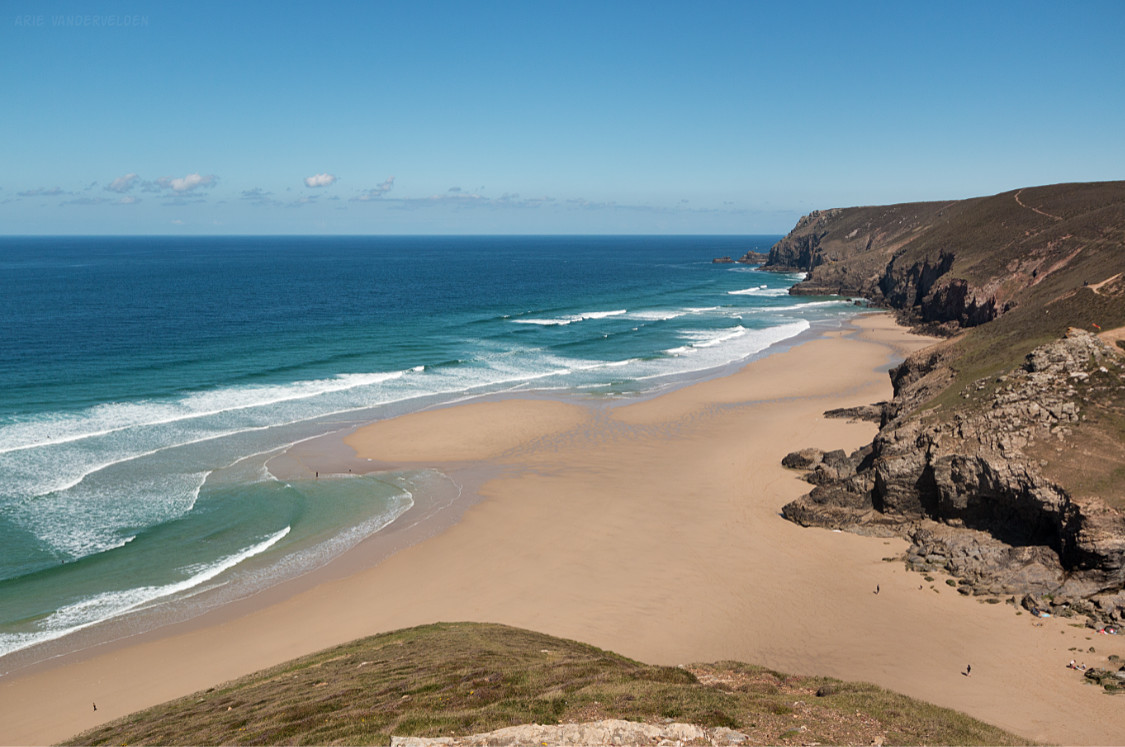 Ahead were the mining ruins of Wheal Coates, spectacularly situated on a hillside above the sea. 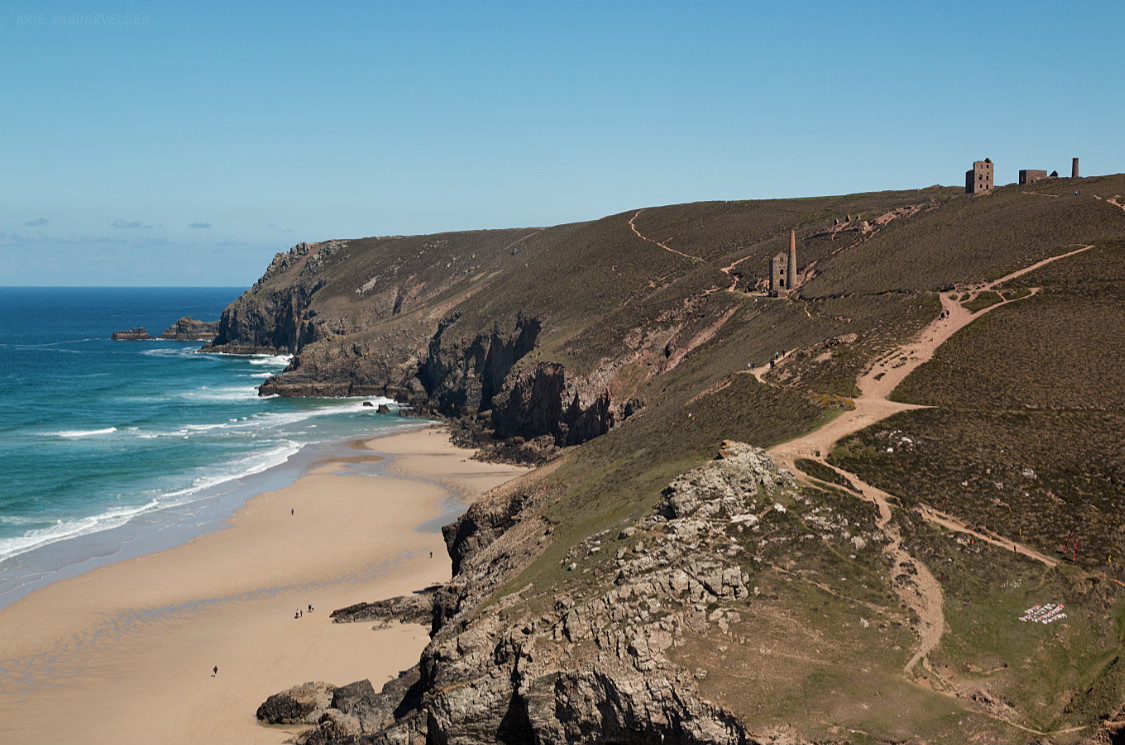 We crossed the valley and hiked up the other side towards the mining ruins. 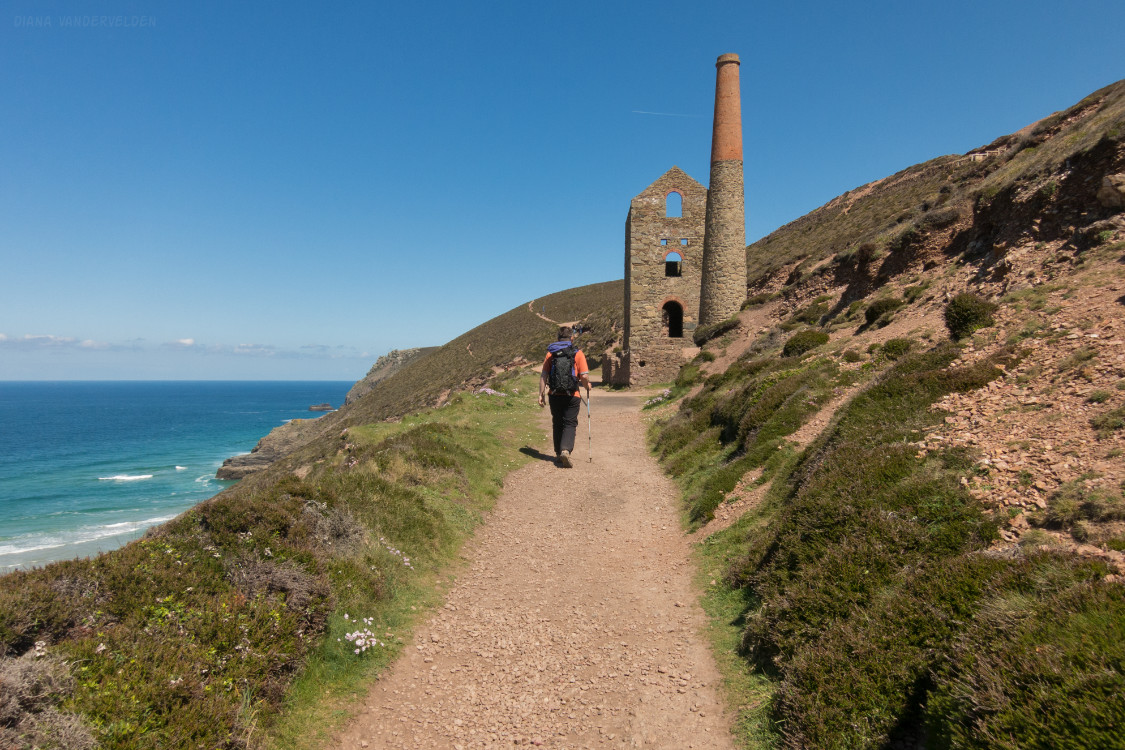 Beyond, the trail headed up to the top of the escarpment.  There were some great views back towards the way we came. 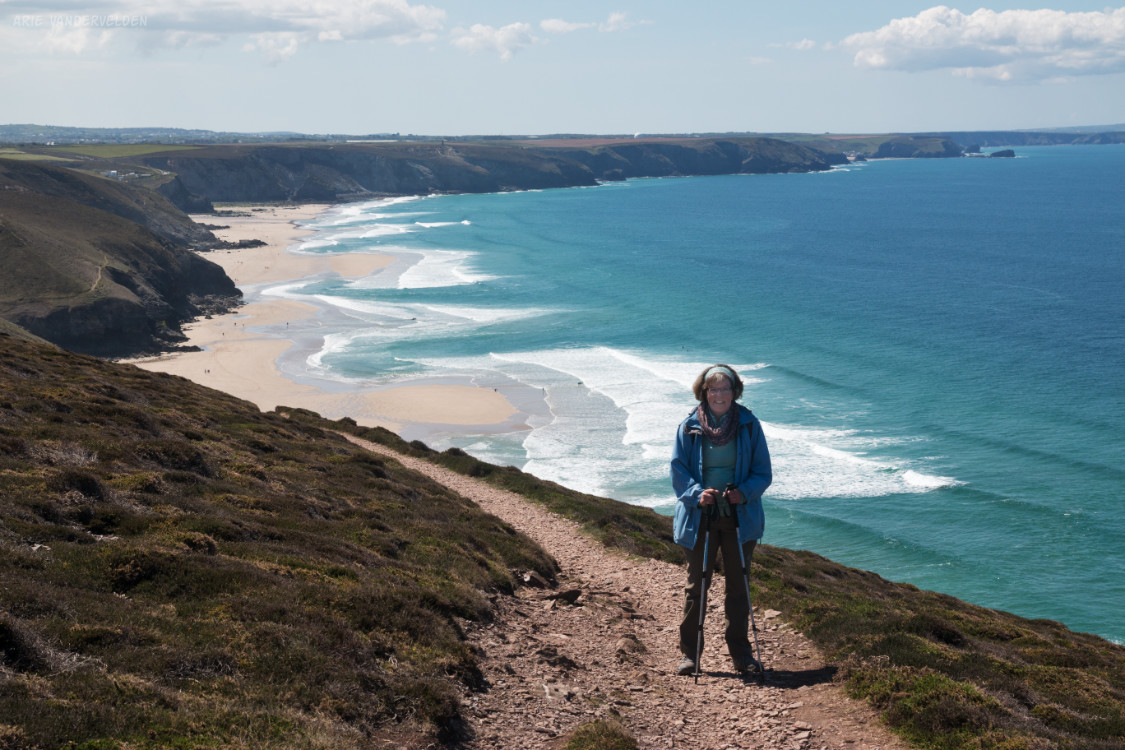 I took lots of pictures. 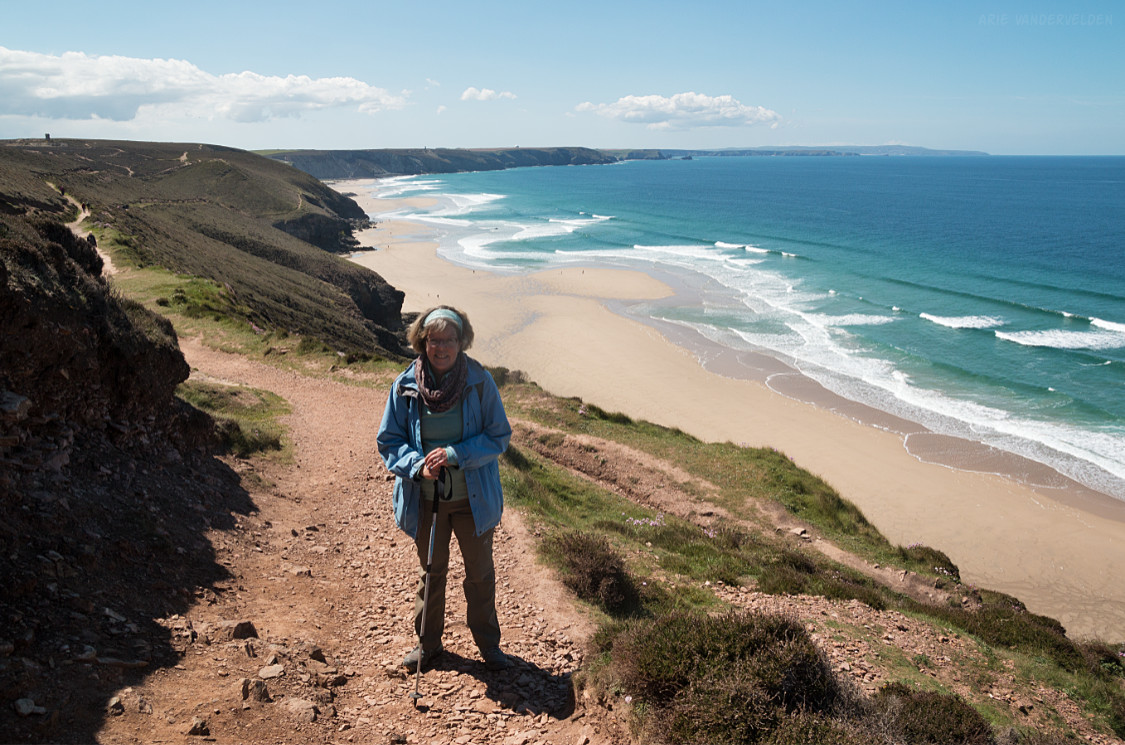 After rounding St. Agnes Head, we decided to hike into the village of St. Agnes where we caught a bus to Perranporth.  We checked into the Seiners Arms.

At Perranporth there is another very big beach.  We took some cold beverages and plunked down onto the sand.  There was a surfing competition going on, and we sat and watched some very skilled surfers ride the small but nicely formed beach breaks.  In the late afternoon the tide was coming in, and the action got closer and closer to us as we sat and watched. 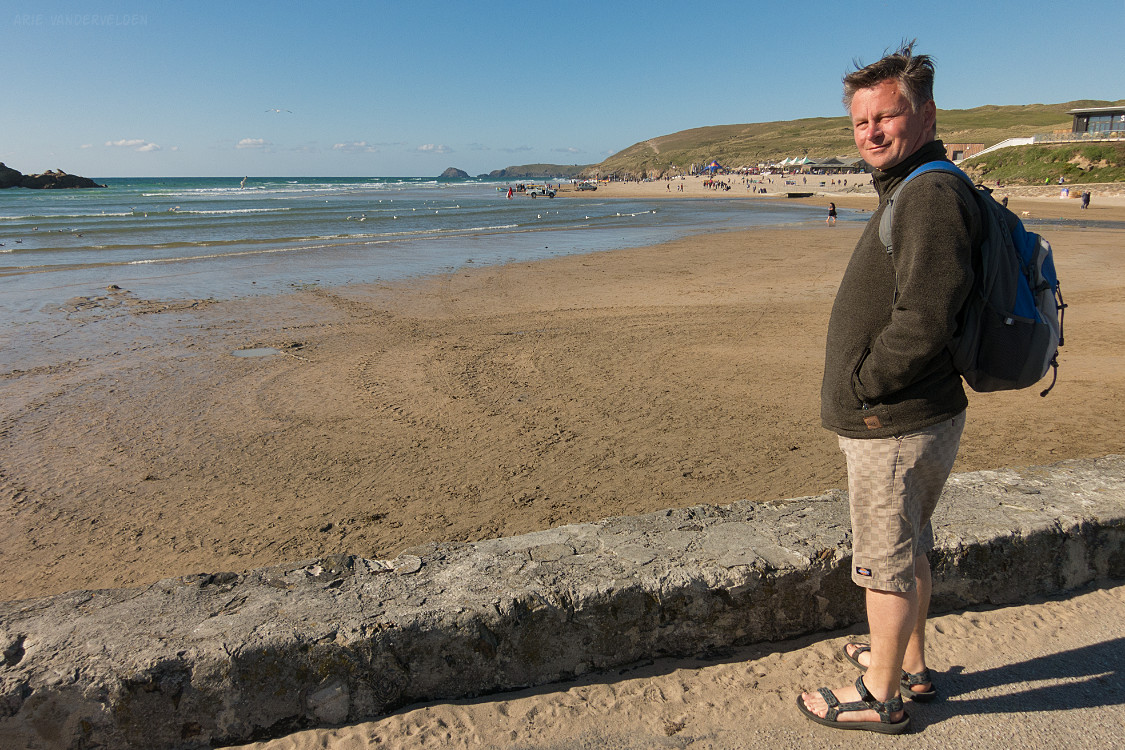 Continue to part 4 of our Cornish hike.

St. Ives to Lelant Saltings (Hayle) is about 4.5 miles.  Hayle to Portreath is 12 miles.  Portreath to Perranporth is 12 miles (of which we hiked 9 miles) 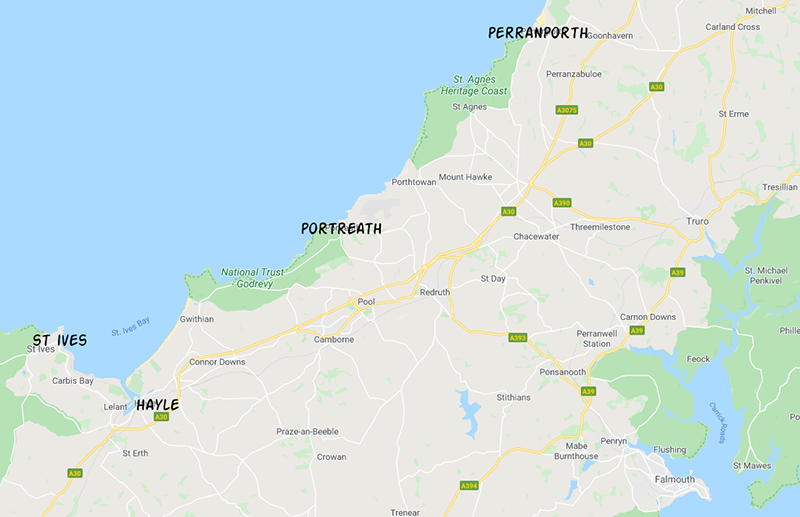