The Republic of Georgia (not to be confused with the US state) is a small country at the foot of the Caucasus Mountains.  Russia is to the north, Azerbajan is to the east, Armenia is to the south, and Turkey is to the west.  The capital is Tbilisi.  The religion is Orthodox Christian and wine is deeply embedded in the culture, as opposed to its southern Islamic neighbours.  Georgia is pretty much Europe’s easternmost outpost.  Diana calls it “the wild east.”

Georgia has been independent since the early 1990s.  It has recently gained a reputation as being a very friendly and welcoming place with some nice sites to visit, and on top of that fantastic food and wine.  All the travel magazines and websites had listed it for “places to go” in 2016.  It got our attention, so we decided to go check it out.

For some strange reason all the flights from Europe arrive in the middle of the night.  We had arranged a airport pickup, and sure enough there was a guy holding a sign with the name of our hotel.  We got to the hotel at four am, and thankfully the owner Mari let us check in early.  We collapsed on the very comfortable beds and slept until noon.  In the afternoon we set out to have a look around.

The center of Tbilisi is a mix of old and new.  The Peace Bridge is an Italian-designed futuristic pedestrian bridge that goes across the river.

From the banks of the river a gondola zips pedestrians across old town and up to the top of the hill overlooking Tbilisi.

Our hotel was pretty much right beneath the cablecar.

From the top of the hill there are great views across Tbilisi.

At the top of the hill, Mother Georgia keeps watch over Tbilisi.  She has a cup of wine in one hand to greet those who come in peace, and she has a sword in the other for those who come as enemies.  Enemies and wine – those two things are Georgian history and culture in a nutshell.

Behind the hilltop is a park with botanical gardens and a waterfall.

Old Tbilisi is a maze of streets on a steep hillside.  There are some beautiful crumbling art-nouveau buildings here.  See my photo gallery in a separate blog post.

Georgia prides itself on religious tolerance.  The Georgian Orthodox church is far and away the dominant religion, but in Tbilisi there are Armenian churches, there is a small mosque, a synagogue, a Zoroastrian fire temple, and there are some Catholics around as well.

As we were walking past the Sioni Cathedral we noticed there was a crowd gathered outside.  We stopped to take a look.  A priest came out and started ringing bells in the belltower. 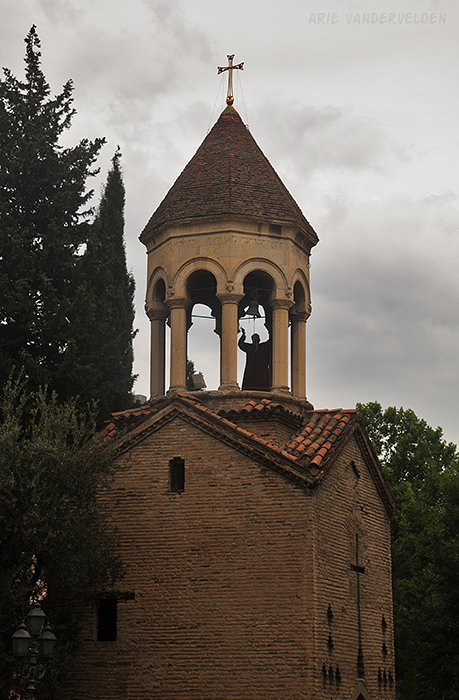 Shortly after a crowd came out of the church.  An elderly gentleman wearing a burgundy mitre was ushered into a waiting limousine.  Later on we learned that this man is the patriarch of the Georgian Orthodox church. 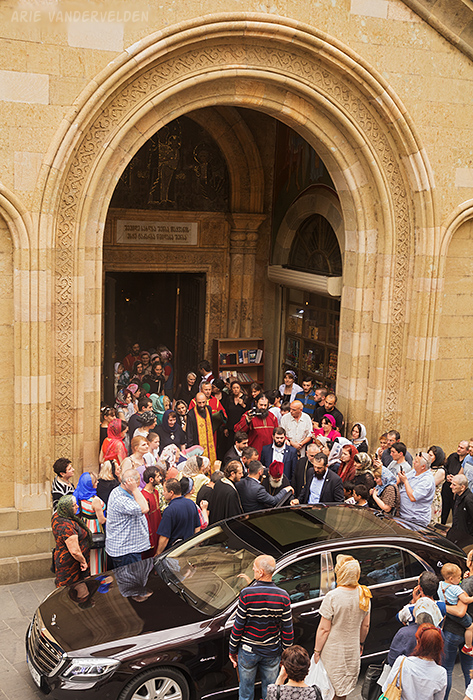 We took a trip to the town of Mshketa (pronounced skayta), just outside of Tbilisi.  We stopped at Jvari Monastery, which sits on a hilltop overlooking Mshketa and the confluence of two rivers.

Jvari Monastery is very, very old.  It dates from the 6th century.  Unfortunately the crowds of people there took away from the atmosphere of such an ancient place.

Mtsketa is quite revered among Georgians.  St. Nino came here in the early 4th century to preach.  She managed to convert king Mirian the third, who proclaimed his kingdom to be a Christian state in the year 326 AD.  As such it’s the birthplace of Christianity in Georgia.  Jvari Monastery was built where Mirian planted a wooden cross, and Svetitskhoveli Cathedral in Mtsketa was built on the site of a 4th century church.

We had some really fun times sampling Georgian food and wine.  I’ve written up some of our experiences in a blog post on food and drink in Georgia.

At night some of the important buildings are lit up in Tbilisi, and I enjoyed taking pictures at blue hour.

The Meidan is a square just across the Metekhi Bridge.  Cars whizz by in all directions, and care must be taken to cross the street.

Our favorite restaurant had a balcony overlooking the square, seen in the following photo.

From the square there was a very steep street going up to our hotel.

From Tbilisi we took a trip to Kazbegi in the Caucasus Mountains, where we spent several days hiking (see separate blog posts).

From Kazbegi we traveled to the Kakheti region in eastern Georgia, the motherland of wine (see separate blog post).

On our way back to Tbilisi we stopped at Davit-Gareja, a desert-like area on the border with Azerbajan. 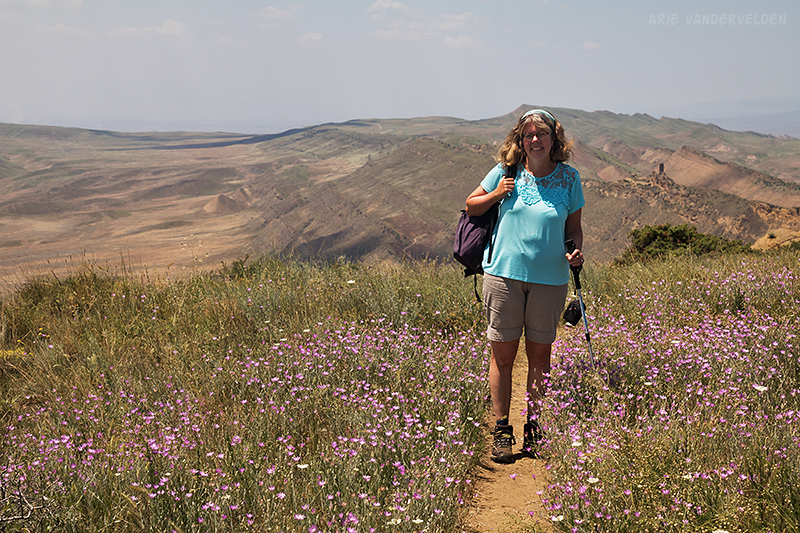 We flew to Tbilisi from Athens, Greece, with Aegean Airlines.  There are also flights from Riga, Istanbul, Warsaw, and other places.  As mentioned, most international flights arrive in the middle of the night.

We visited in June 2016.  The weather was hot and humid in Tbilisi and Kakheti regions, blazing hot at Davit-Gareja, and pleasant in the Kazbegi area in the Caucasus Mountains.

In Tbilisi we stayed at Hotel at Gomi 19.  Owner Mari is super friendly, generous, and hospitable.  We had some wonderful conversations.  She arranged cars and drivers for us.  The location is excellent.  Highly recommended.

A visit to the Republic of Georgia