Lagoa do Fogo is much higher in elevation than Sete Cidades.  A hike here takes good weather because this area is often enshrouded in clouds.  The road to Lagoa do Fogo passes a high point on the crater rim where there are some communications transmission towers.  From here there is a great view down into the crater. 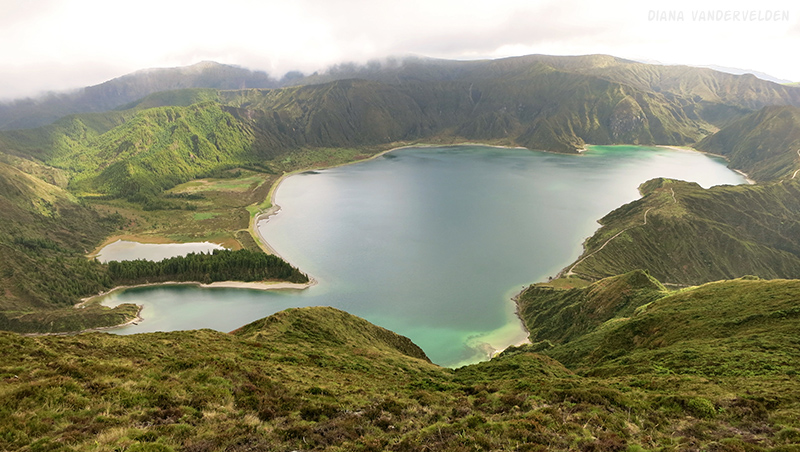 For our hike we descended into the crater at the left side of the picture, then hiked the beach in front of the tall coniferous trees, and continued clockwise to the point where a tall rocky ridge protrudes into the crater lake.  We came back the same way.

The hike begins at a parking lot a bit further down the road.  The trail immediately descends very steeply into the crater. 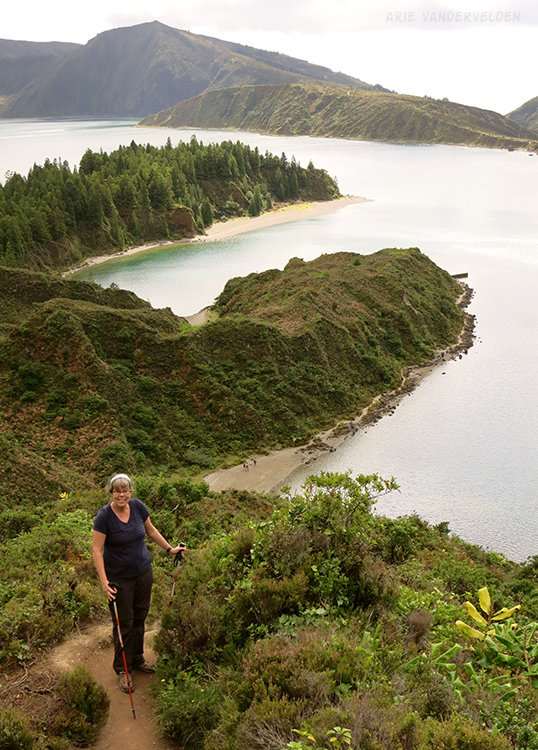 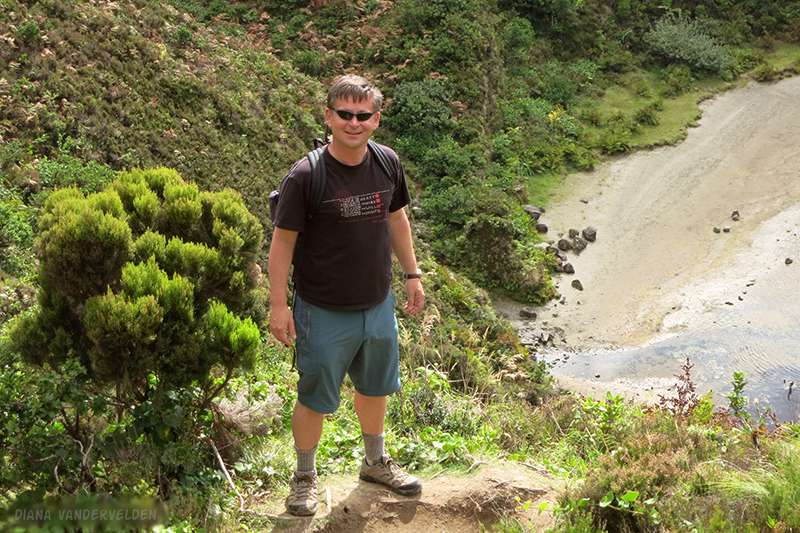 As we descended the crater walls grew in height. 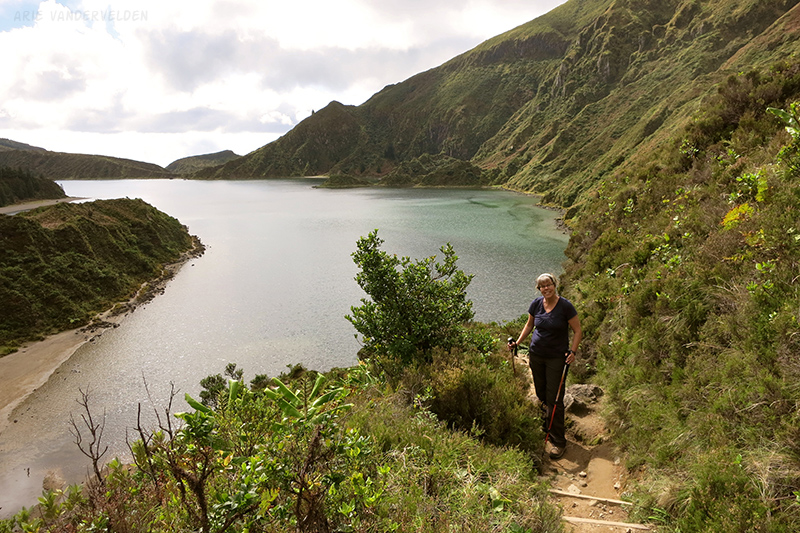 The trail reached the lake at a little bay with a beach. 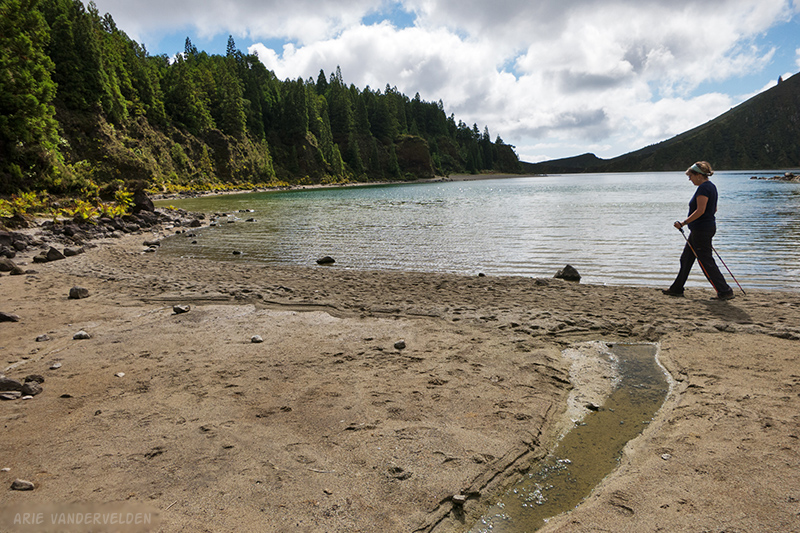 From here we skirted around two rocky points.  There were bits of beach to follow. 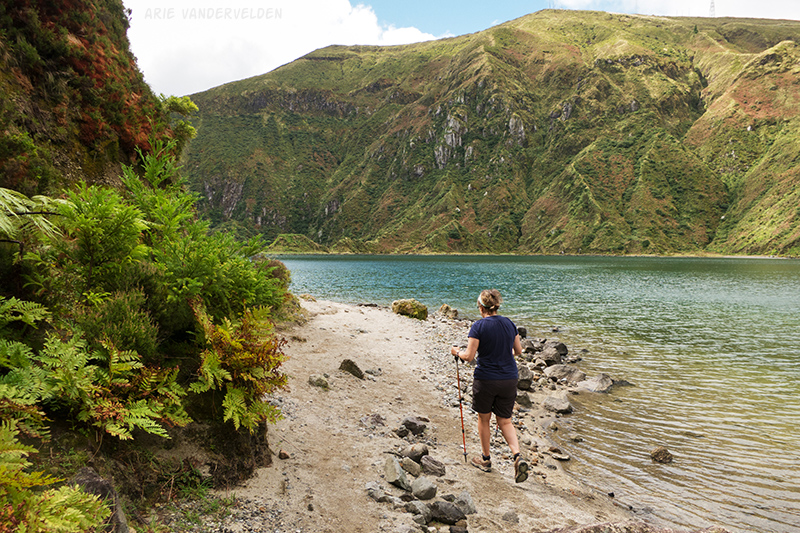 Around the second bend was a large beach.  The scenery was really nice here. 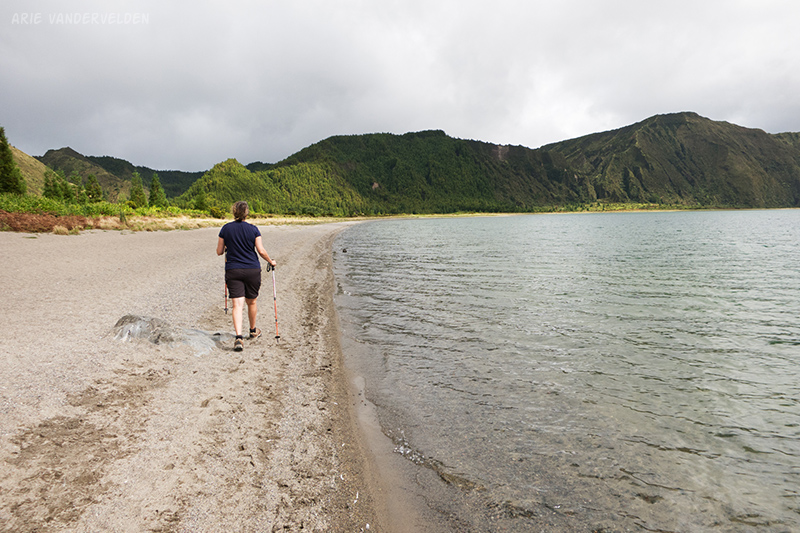 On our left was a shallow pond. 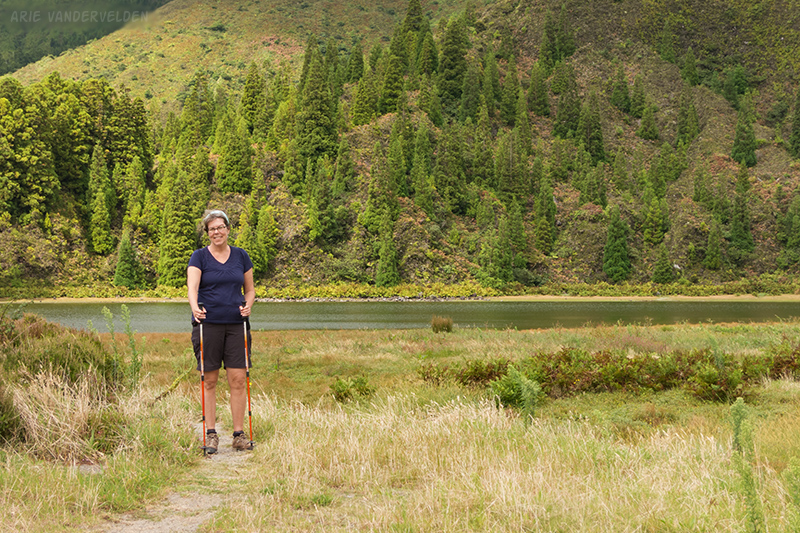 We hiked further on along the beach. 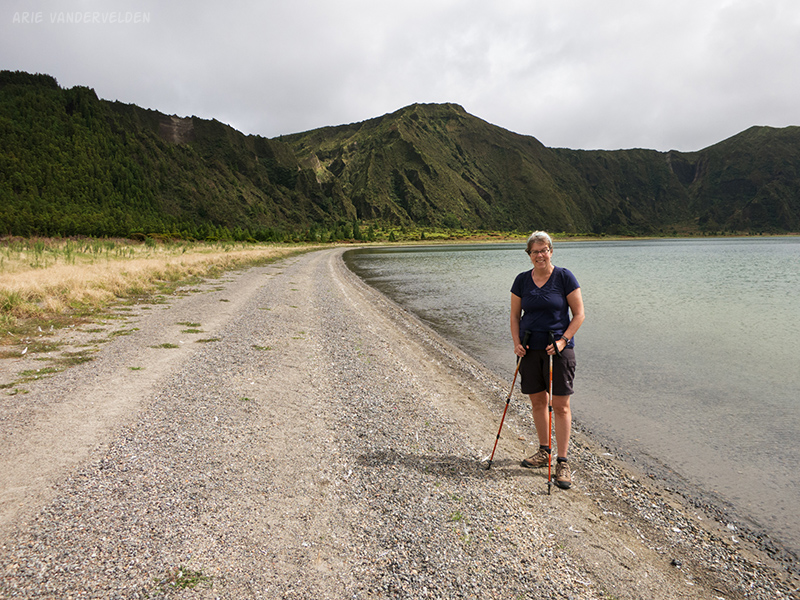 Sadly, we did find a number of dead seabirds washed up along the shore.  I’m not sure what killed them; maybe there is something poisonous in this volcanic lake.  It was quite upsetting.  These birds are magnificent creatures who fly across entire oceans. 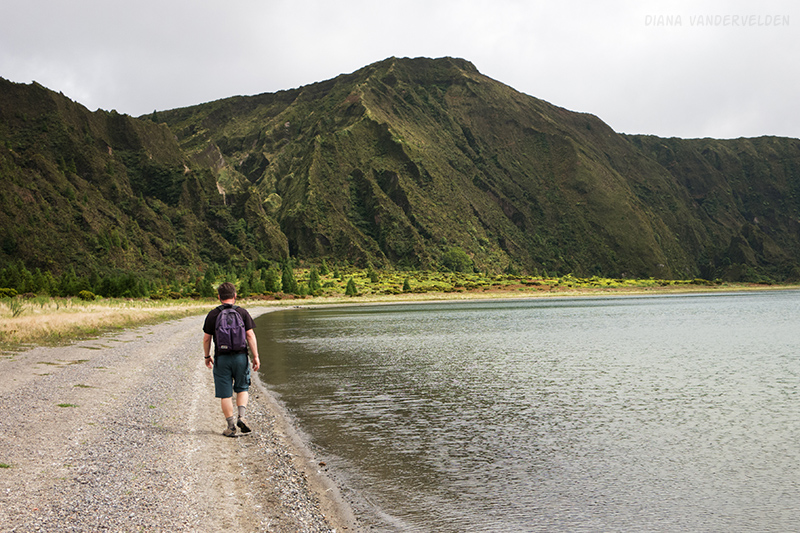 Eventually the beach petered out and we managed to continue on for a ways on a strip of grass. The grass ended at the foot of the crater wall, a mass of ferns and other greenery.  It was a nice spot for a snack.  We went back the way we came. 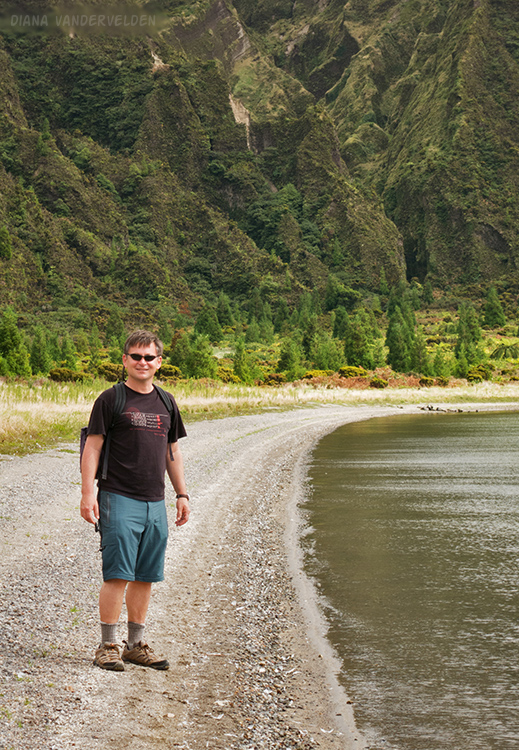 This hike almost didn’t happen.  The weather was quite poor day that day.  Diana and I were driving along the north shore of São Miguel when we passed the little town of Maia.  I remembered reading something about a hike here, so we drove into town and found a place to park.  Just then a cloud above us burst and sent a torrential downpour down.  We sat in the car for five to ten minutes, waiting.  Just when I was putting the key back into the ignition, the downpour shut off and the sun came out, all within seconds.  It was a sign!  We decided to go check it out.

The hike started at the small beach and boat launch in Maia.  A trail led eastward on a sideslope overlooking the sea. 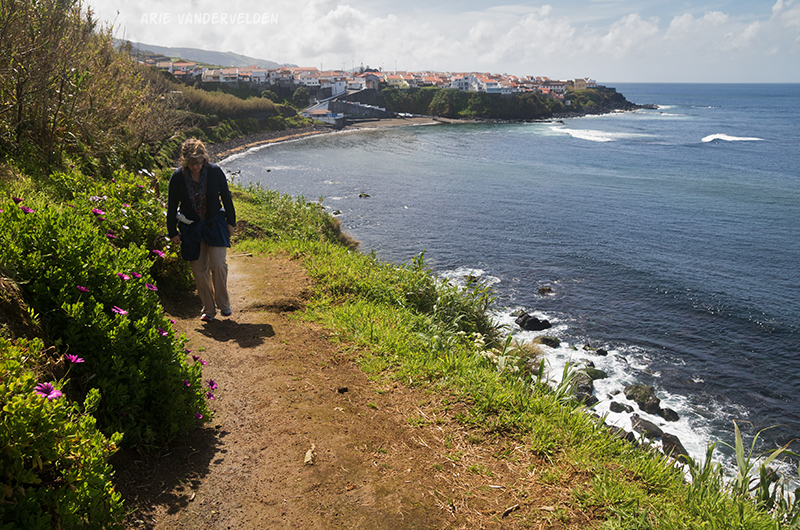 There were pretty flowers along the trail. 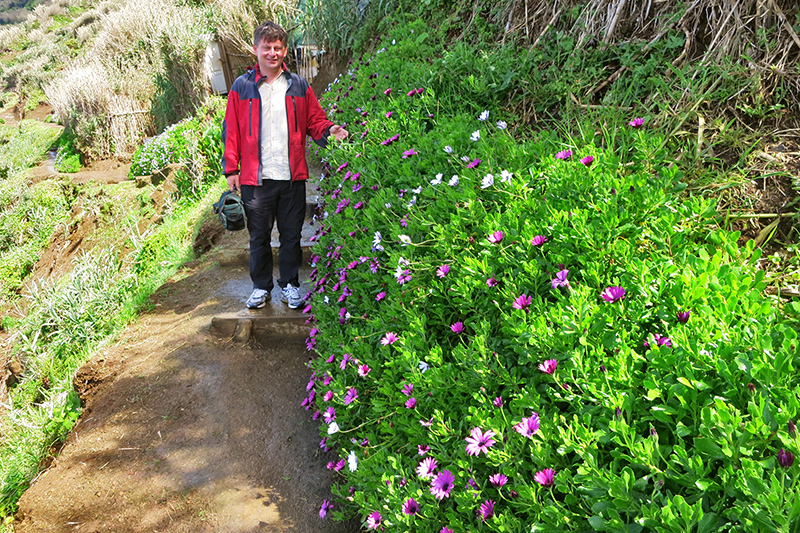 Just a short distance along the trail was a spring.  It had been developed into a series of basins where women used to do their washing. 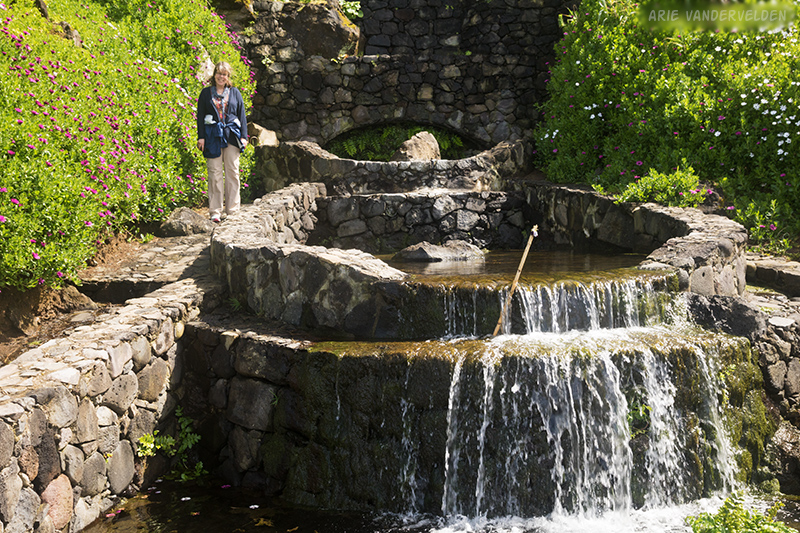 There were some interpretive signs along the first part of the trail that had some wonderful historical photography.  The photos showed farm women back in the day.  The women in the photos look proud, but the farm work must have been hard.  Diana took some photos. 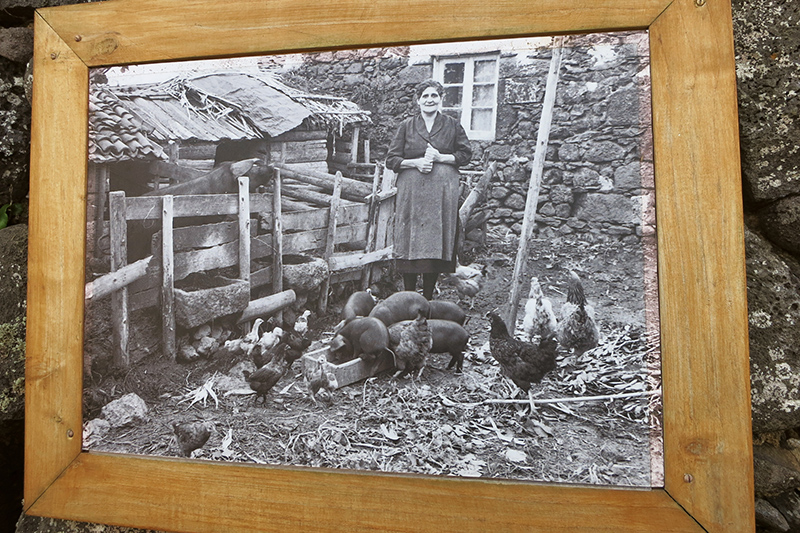 Besides white and purple flowers, there were also some vegetable patches along the trail. 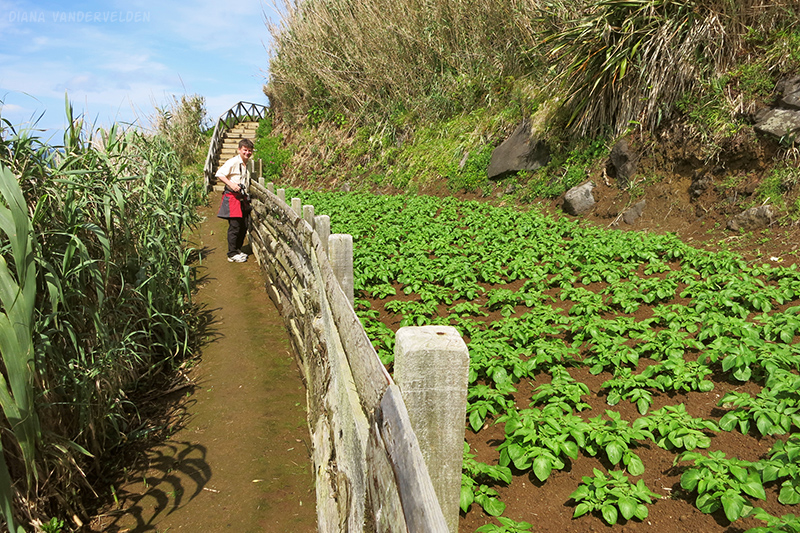 The trail then went up some stairs to gain a bench.  A short distance along was a pretty old farmhouse with some lovely stone walls.  This place looked very well kept. 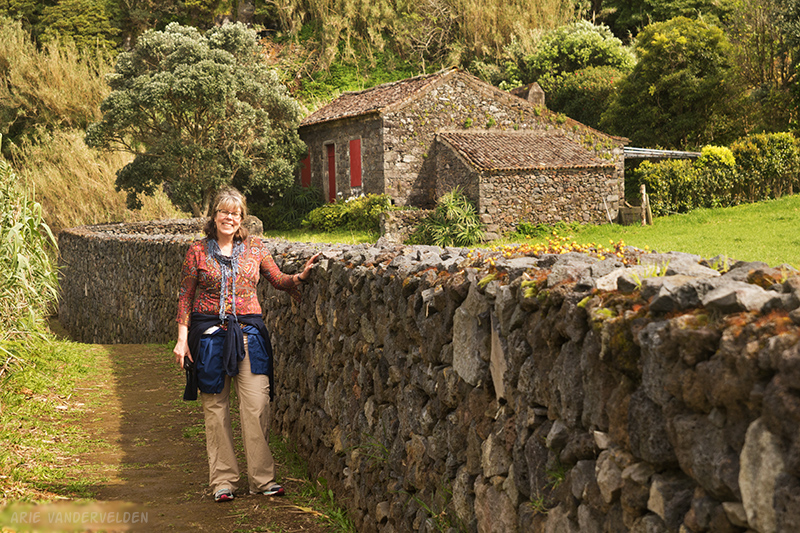 Ahead was another stream.  Here, the water had been diverted to a series of millhouses, one above the other. 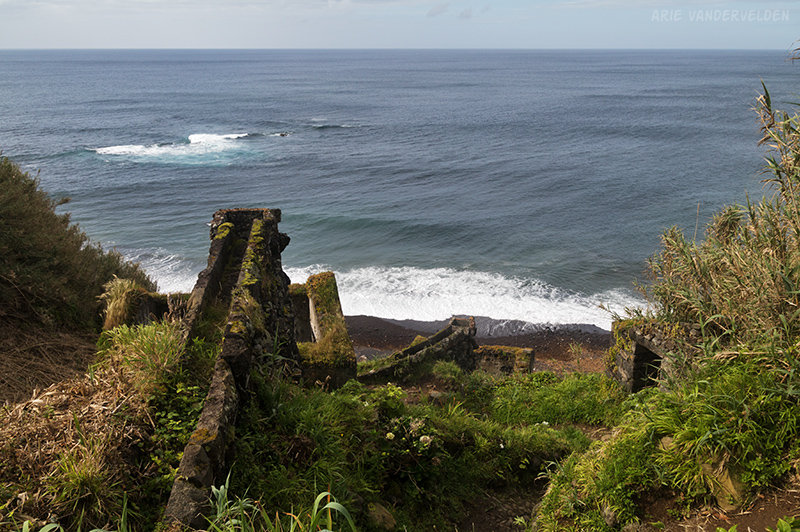 We had fun looking around the ruined millhouses.  Beautiful old millstones were still inside the millhouses, or else carelessly tossed in the bushes. 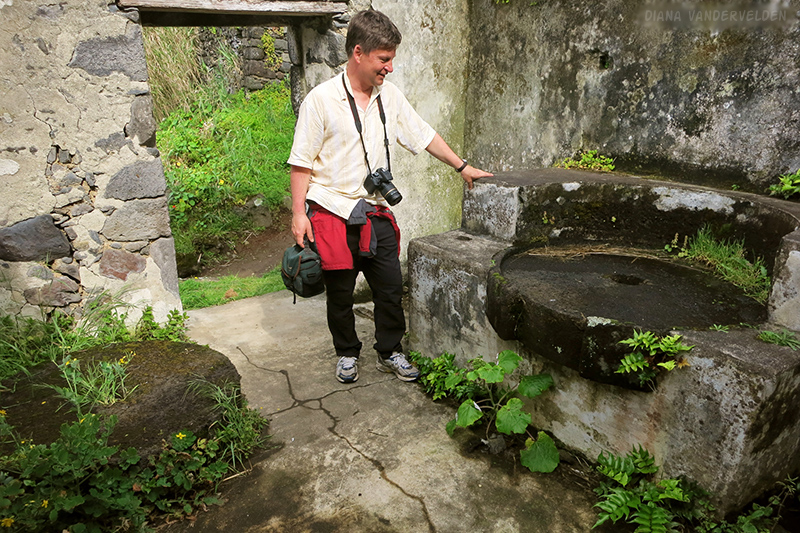 Between the old photography and these ruined millhouses, we felt like we sampled some of São Miguel’s history.  The trail ended on a lonely little cobblestone beach, about 2.5 km from the road.  We returned the way we came.  Before leaving we had a look at Maia’s pretty church. 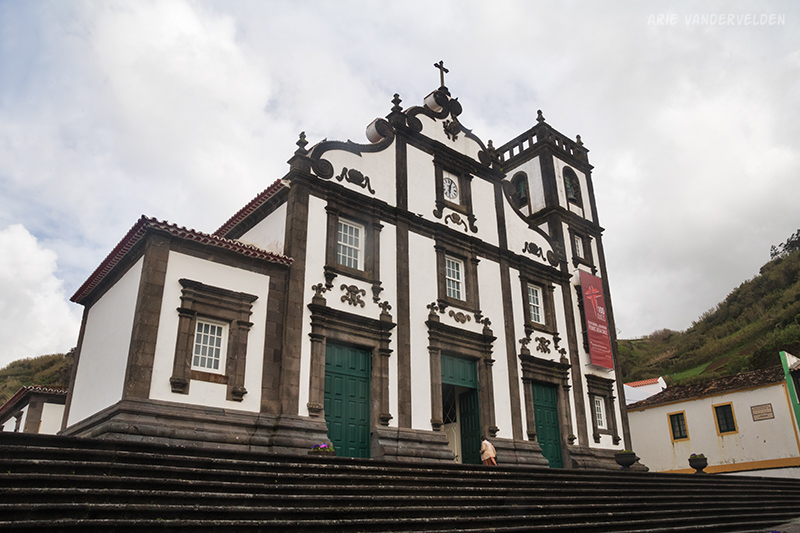 Chá Gorreana claims to be the only tea plantation in Europe.  This is a bit of a fib; tea is grown in Cornwall and in the Republic of Georgia, for example.  But tea is certainly a unusual crop, and we enjoyed touring the plantation.  We started our tour with a walk around the plantation. 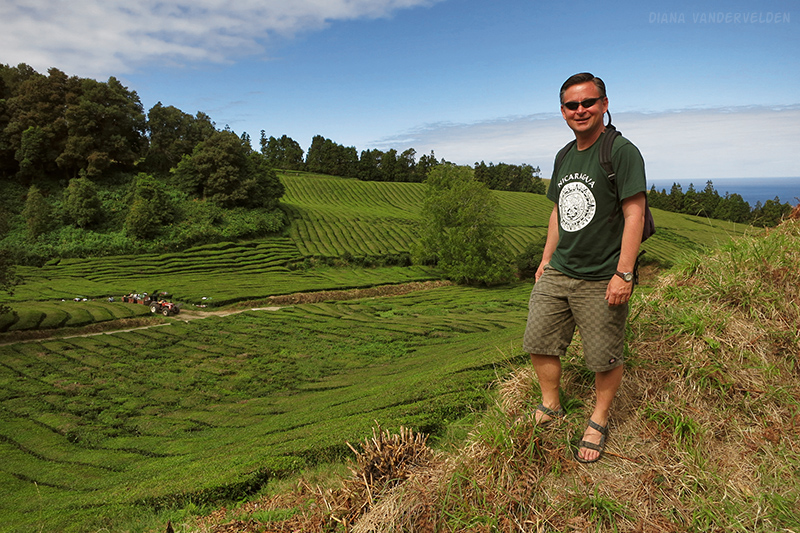 Some harvesting of tea leaves was underway that day. 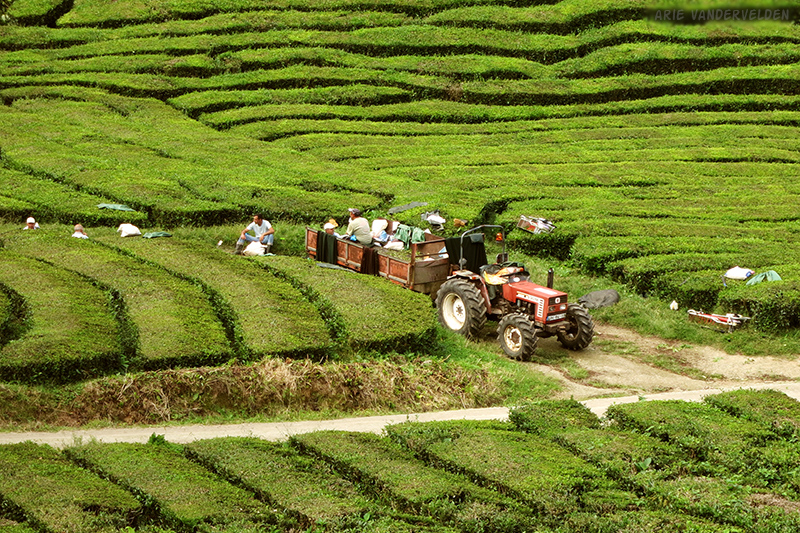 Tea grows as hedges with deep green leaves that are shiny and somewhat waxy looking. 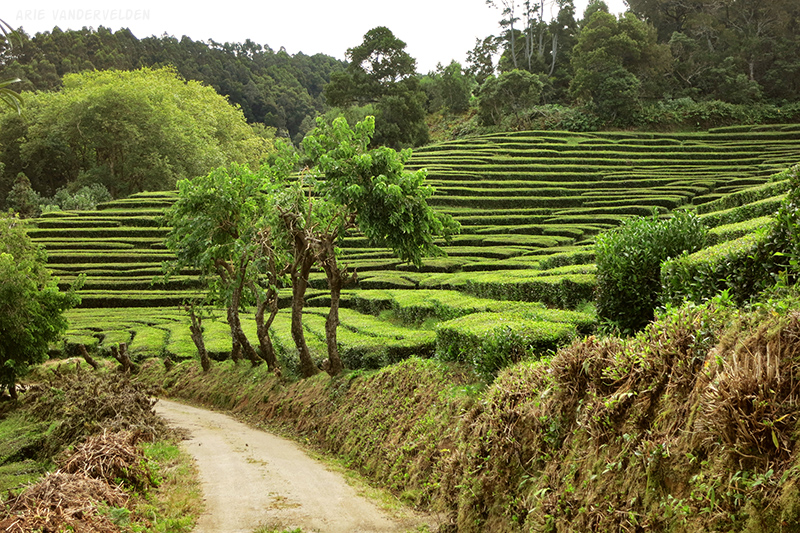 Below the tea plantation is the processing plant.  You can go inside to see how the tea leaves are processed.  The machines used to process the tea date from the mid 1800s, and they are still in use today.  Amazing! 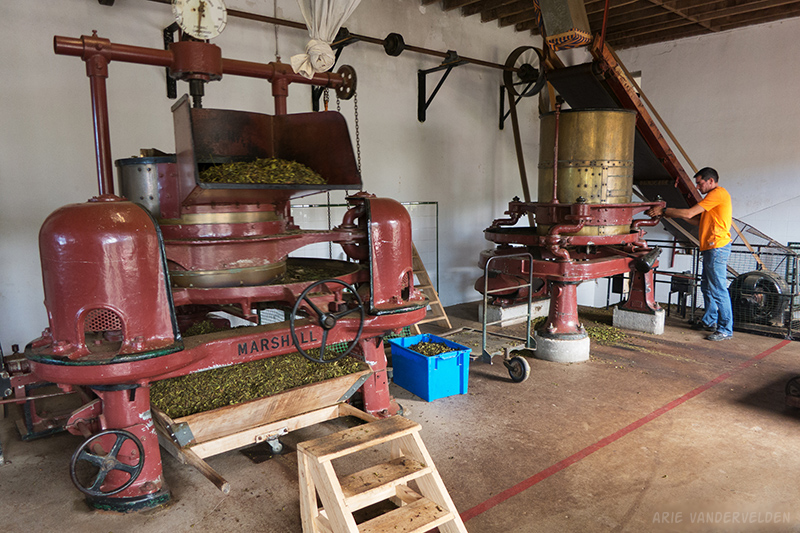 Down the hall, women were sorting out tea leaves.  The leaves at the tips of the branches make orange pekoe tea, the next leaves pekoe, and the rest are broken leaf grade. 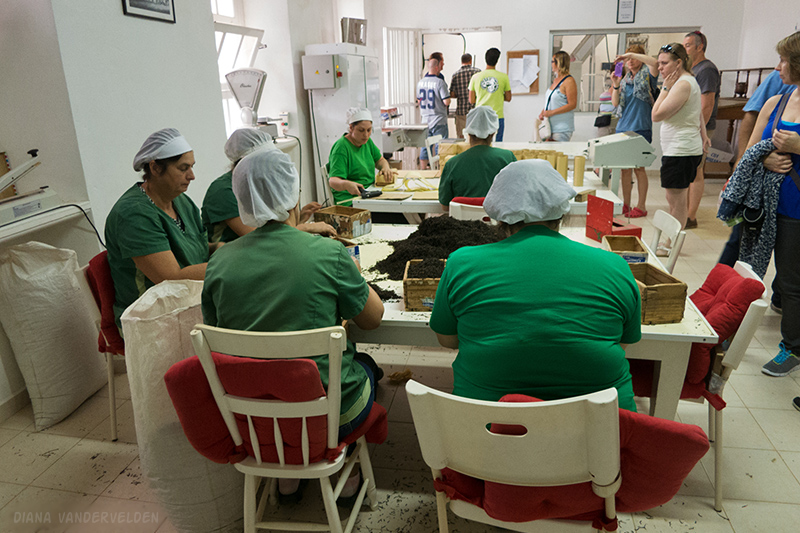 Behind the women was a tea-bagging machine. 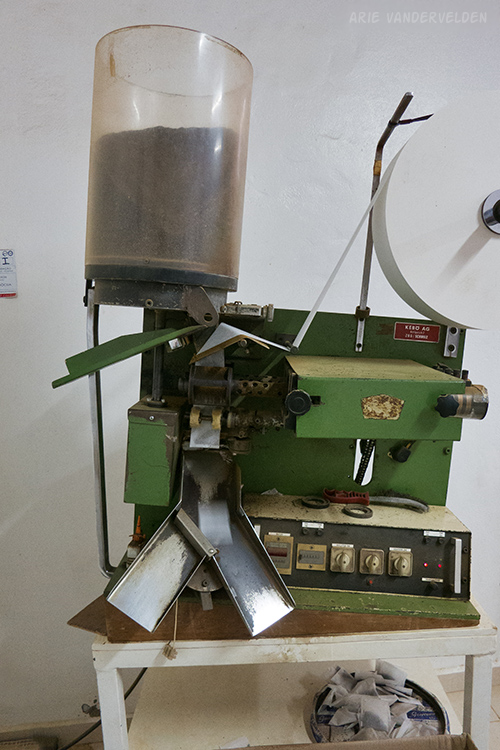 The last stop is a tasting room where you can help yourself to a cup of tea.  The tea was very aromatic, and you could tell it was fresh.  There was a nice view from the tasting room as well.  We bought some chá Gorreana tea to bring home with us – a nice souvenir. 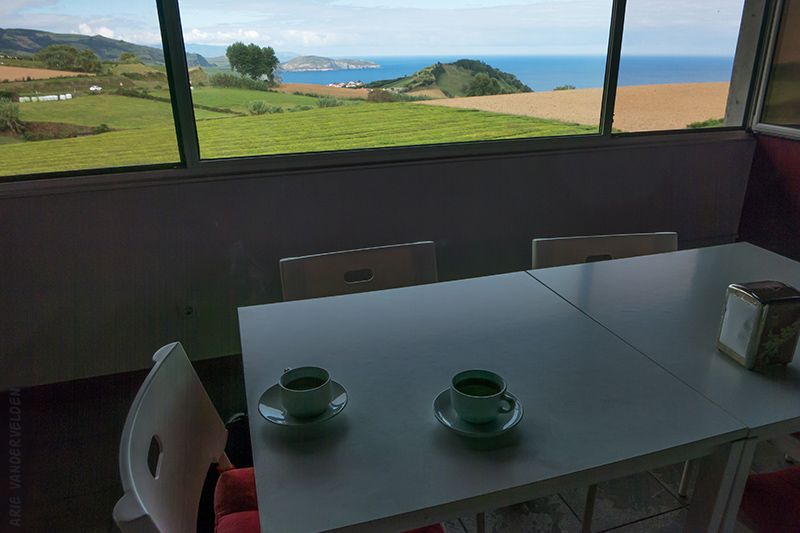 Continue to the final part of our São Miguel hikes.

Lagoa do Fogo is reached by a road that goes from Lagoa to Ribeira Grande.  The route is well signed.  The hike into the crater and back out took us about three hours.  Stieglitz’ guidebook describes a much more strenuous approach from Agua d’Alto on the south coast.  I’m sure this is a fine trail and I’d like to hike it some day.

Maia is just east of Ribeira Grande, on the north coast of São Miguel.  The hike begins at the harbour and is well signed.  Here is a trail description and map.  I think it took us about two hours to hike out and back.

Chá Gorreana is near São Bras and Maia (see previous hike).  It’s on the north side of the road in a set of curves, and it’s easy to miss.  Visits to the plantation and processing plant are free.  The suggested hike around the tea plantation is a 3.4 km loop.  We did a slightly shorter version of this loop.