The Azores are a group of volcanic islands in the middle of the Atlantic Ocean.  This Portuguese territory is a remote outpost of Europe.  We visited Sao Miguel, the largest and most populous of the Azorean islands.  Even so, São Miguel is mostly rural, covered with emerald-green pastures and forests.  São Miguel is about 1500 km due west of Lisbon, about a two-hour flight across nothing but open water.

The Azores are similar in many ways to nearby Madeira.  Thanks to the Gulf Stream, Madeira and the Azores have a very mild climate.  Just about anything grows here.  And just like Madeira, São Miguel doesn’t have many calm beaches amenable to swimming.  Its coastline consists of cliffs and back cobblestone beaches pounded by the Atlantic surf.

The interior of São Miguel is less rugged than Madeira.  There are gently-sloping volcanoes covered with lush grass that are perfect for dairy farming.  Portugal gets almost all of its dairy products from the Azores.  Whaling used to be big business here in the past, but of course this practice was ended quite some time ago.

São Miguel may not be suitable for a beach vacation, but it has a network of wonderful hiking trails that make it perfect for a walking holiday.  This, and the laid-back atmosphere of the island, had us visiting in 2015 and returning again in 2016.

Furnas is a volcanic caldera that contains a lake, a town, and several geothermal areas.  A short hiking trail leads around the lake.  We began our hike on a cobblestone private drive that leads past some villas. 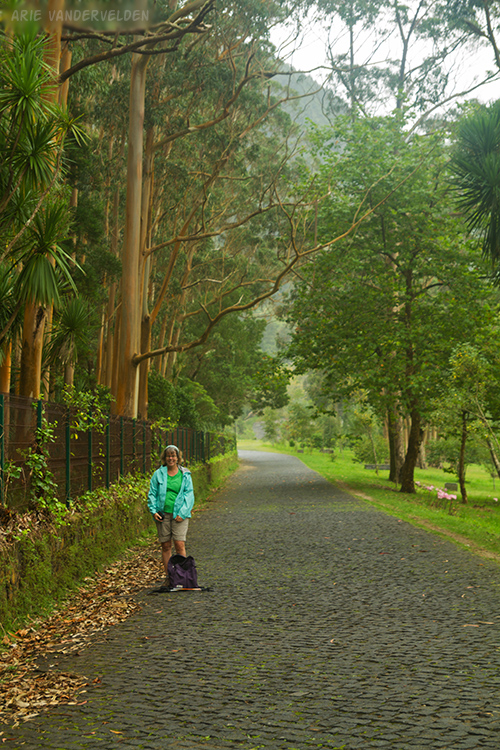 The trail passes a moss- and lichen-covered stone church. 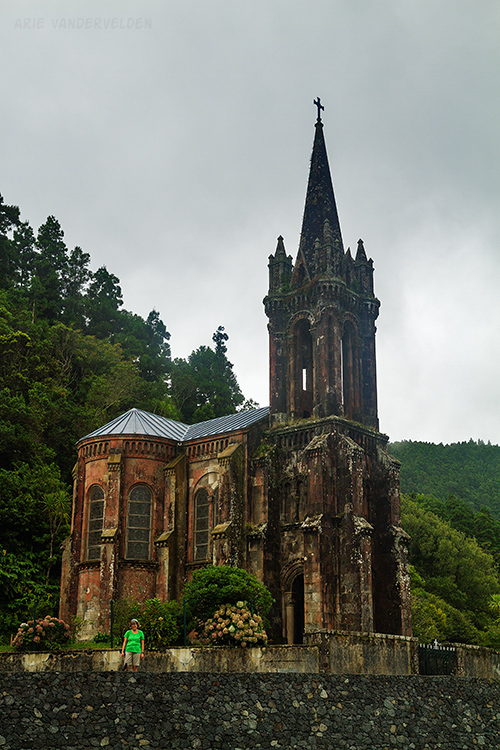 The Furnas caldera is quite a lush and damp area.  Both times we visited it was foggy and raining gently.  There are some very large deciduous trees, tall Japanese cedars, palms, and tree-ferns. 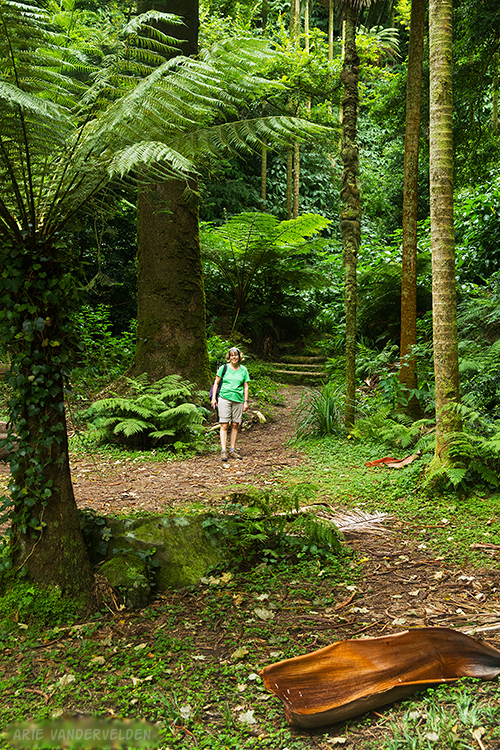 The trail went through a section of bamboo forest. 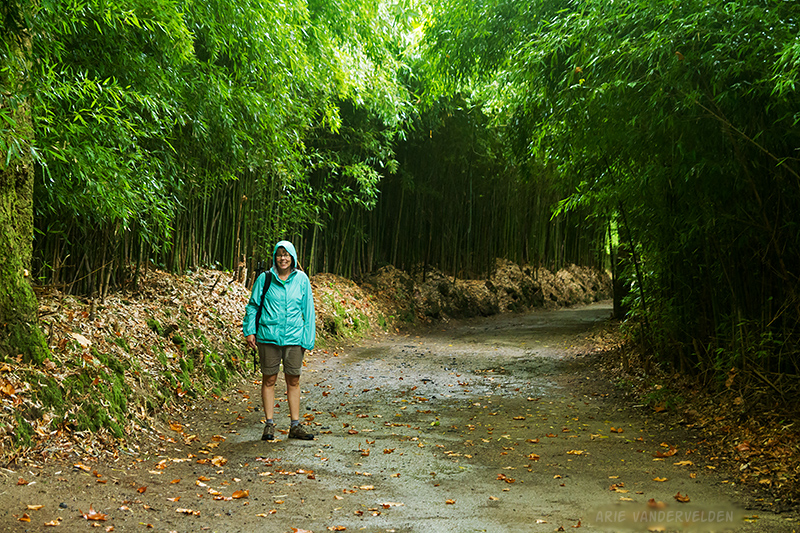 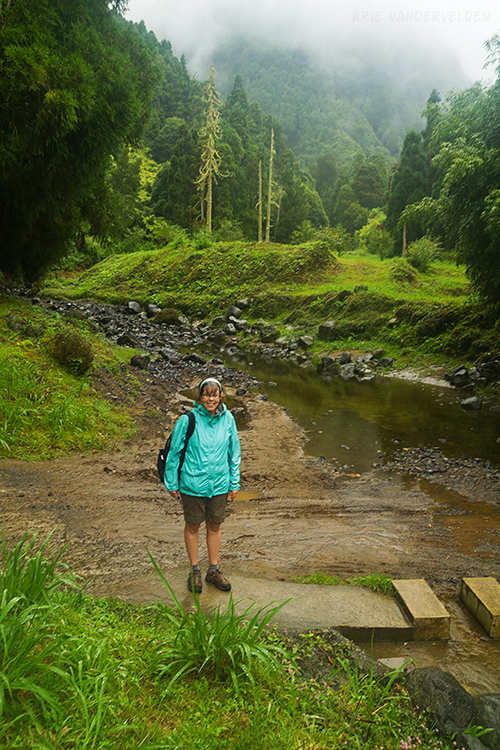 Here and there were some views of the lake. 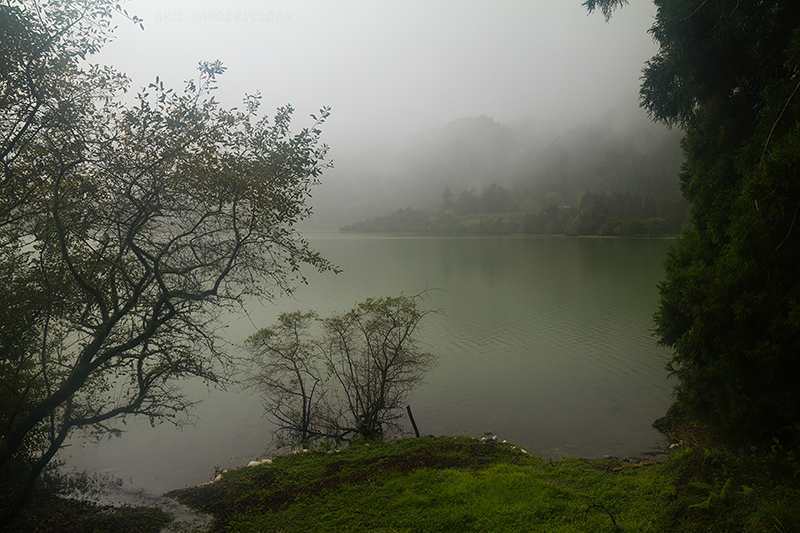 Forestry is a big industry on São Miguel, and Japanese cedars are planted for timber.  These cedars have a reddish bark. 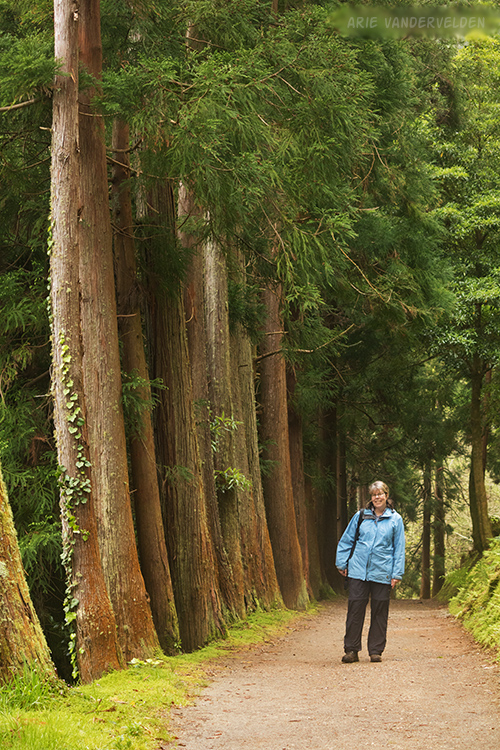 Ginger is a very common undergrowth in cedar forests.  The Himalayan ginger lily is not a native species, and it tends to crowd out the native vegetation.  But it does produce very pretty flowers. 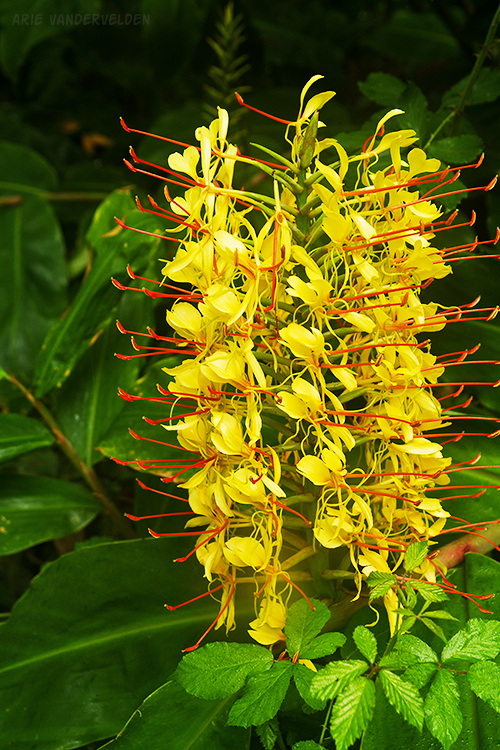 We found some azaleas growing beside the trail. 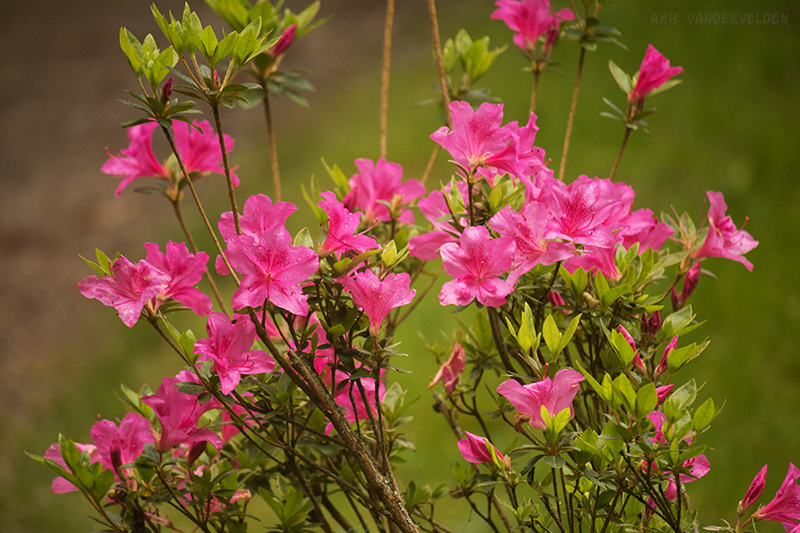 These calla lilies were huge. 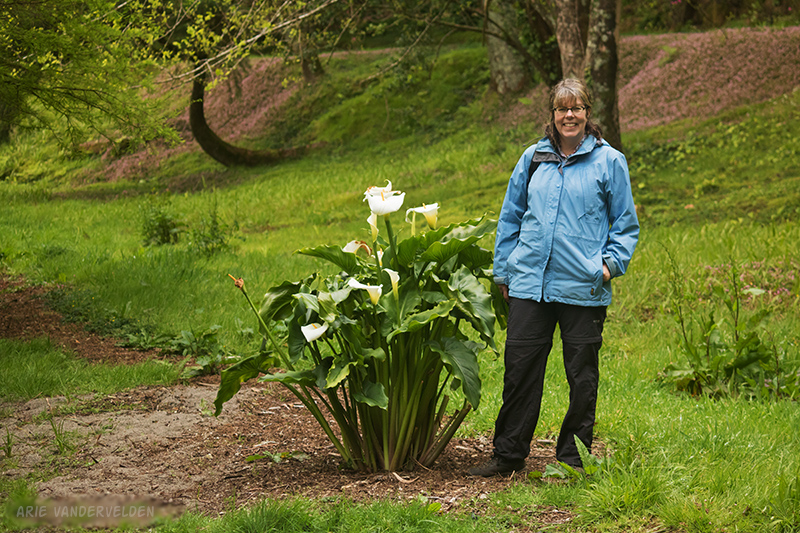 On São Miguel, calla lilies commonly grow in ditches.    We thought about how much they cost in Canadian flower shops. 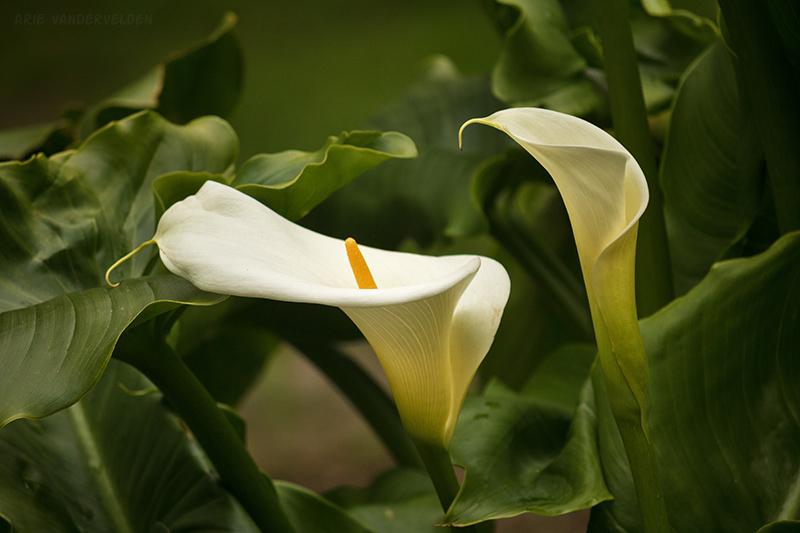 At the far end of the lake is a geothermal area.  Boiling water with a sulfuric smell bubbles from the ground. 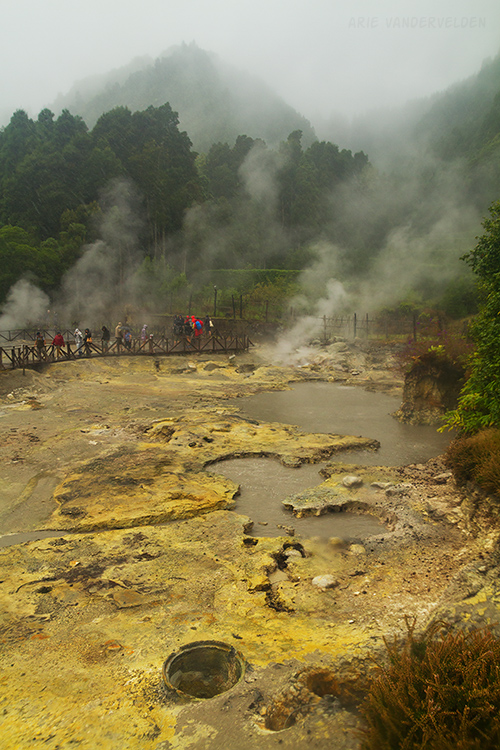 Note the round hole in the foreground.  Locals use these to cook stews called cozidos.  Pots of food are left here to cook all day in the geothermal heat, and are then served in fancy restaurants in town.  Unfortunately, no enterprising locals have thought to set up a food truck right on site.  Too bad, because we were hungry.

Furnas has a confusing network of winding roads that intersect at strange angles.  Fortunately there are signs pointing the way.  Parque Terra Nostra is roughly in the center of town.  A visit to Parque Terra Nostra works well in combination with the hike at Lagoa das Furnas.

The park was originally the estate of a marquis, who had his 30 acres landscaped with various water features and a collection of  botanical specimens from around the world.  In the 1920s the estate fell into disrepair, and eventually it was fixed up as a public botanical garden, with hot pools for swimming. 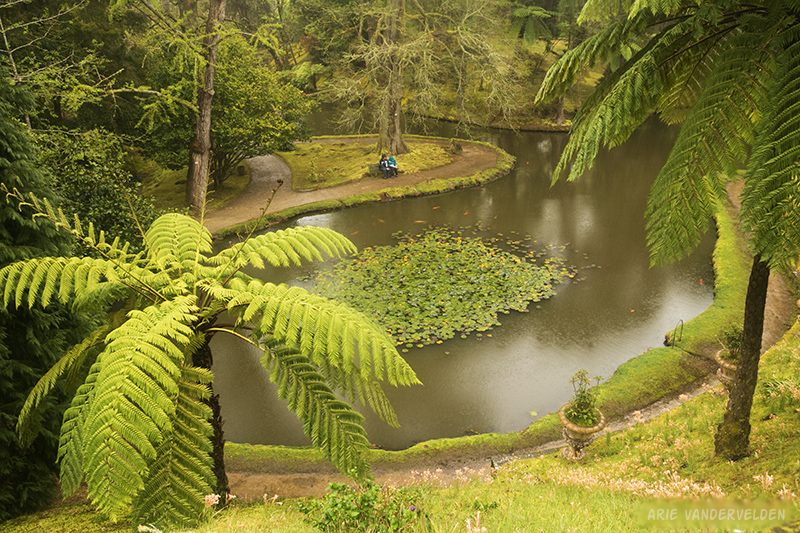 In some ways the gardens resemble those of Japanese temples.  The focus is on greenery rather than flowers.  Instead of maples, tree ferns are prominently featured.  I like tree ferns.  They have a very primitive look about them, and walking among them it feels like you’ve been beamed back to the Jurassic period. 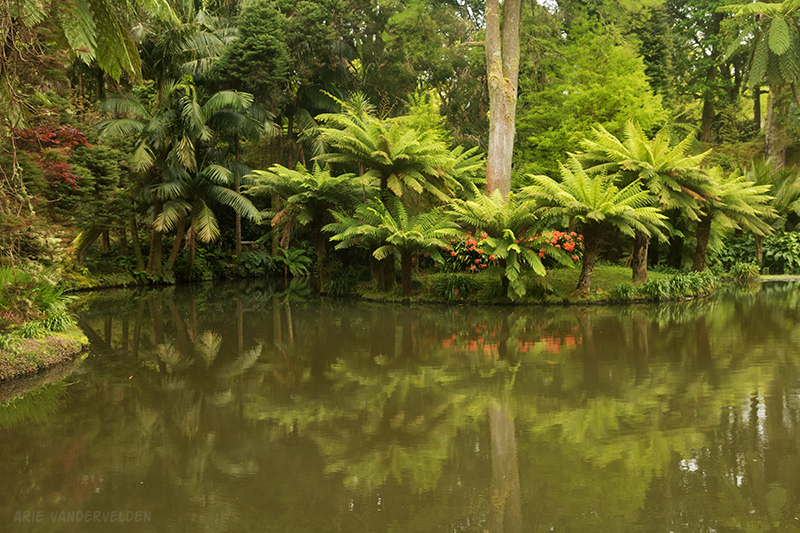 The foggy. misty air added an element of mysteriousness. 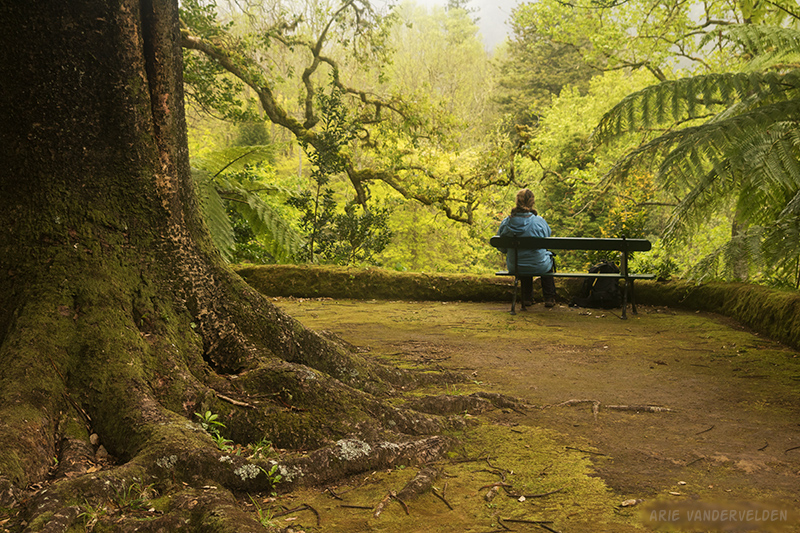 As we walked around, the rain intensified from a fine drizzle to a steady downpour.  It didn’t matter because everything was wet anyways.  We changed and went for a dip in the hot springs. 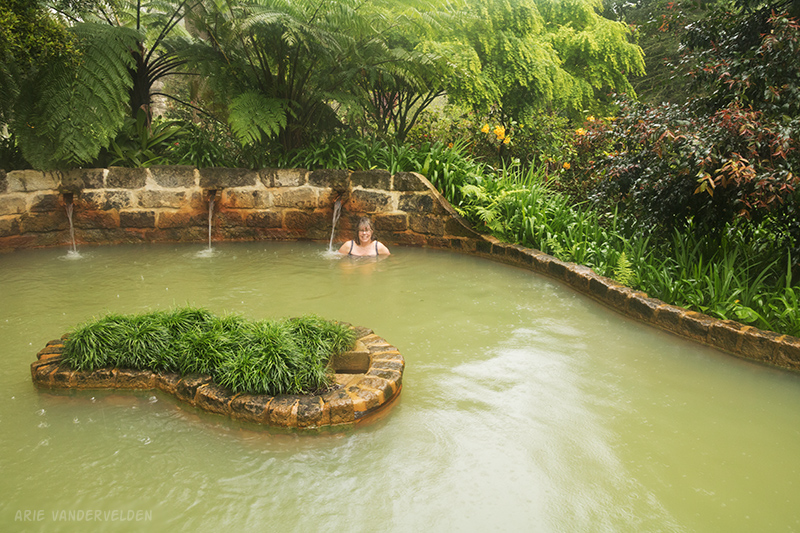 Furnas is on the east side of São Miguel.  The way is well signed. 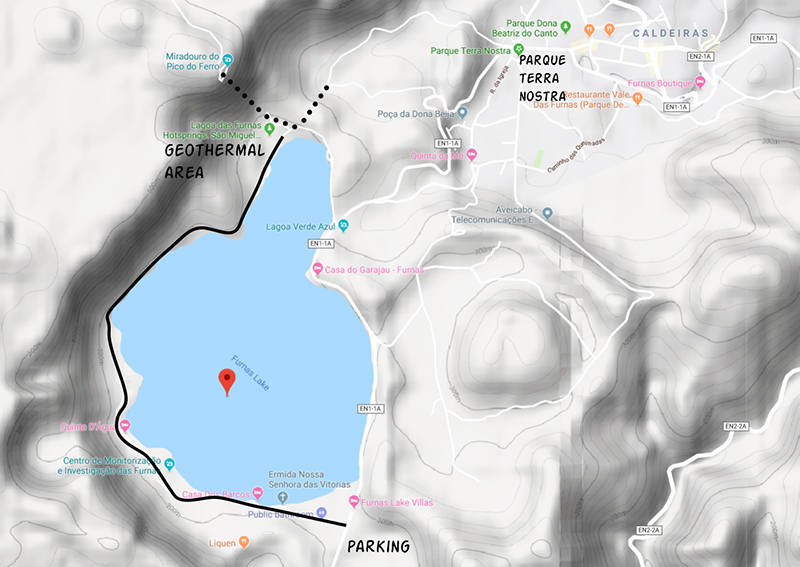 Back in the 1950s, the Azores were well connected to the world.  The Azores used to be a required refueling stop for transatlantic flights.  By the mid 1960s, jumbo jets were able to cross the Atlantic without non-stop, and the Azores became much more difficult to reach for travelers.  The only way there (by plane) was on an expensive TAP or SATA flight from Lisbon.

These days, some discount airlines like Ryanair and Easyjet have started flying to Ponta Delgada (PDL) on São Miguel.  This has brought the price of tickets way down.  Most connections are from Lisbon.  Seasonally, there may be some flights from other parts of Europe.  As well there are some flights to major airports in eastern North America.

Ponta Delgada, on São Miguel, is a connection point for flights to other Azorean islands and to Madeira.  When we visited in 2016 we connected from Madeira to Ponta Delgada with SATA.  It was a short flight with a Dash-8 propeller plane.

The best way to get around São Miguel is by car.  Cars can be rented at the airport, and driving is pretty straightforward and relaxed.  São Miguel is small enough that you can drive anywhere on the island from a central location for a day hike.  The island is about 60 km long and 12 km across, and is criss-crossed by winding little country roads.  The roads are generally in good shape.  Here and there are some very narrow roads through villages, where it may be necessary to squeeze over and tuck in your mirrors if you meet oncoming traffic.  There may be cows on the road.  At times we ran into dense fog which required caution.

Our travel and hiking guidebook was Azores, car tours and walks by Andreas Stieglitz (Sunflower books).

There are a number of hotels on São Miguel, most of them in the Ponta Delgada area.  We chose to rent an apartment through airbnb in the village of Ribeira das Tainhas area.  The airbnb listing looked looked pretty good, but I had no clue that it would be as nice as it is.  Here is the front gate of Quinta das Amoreiras. 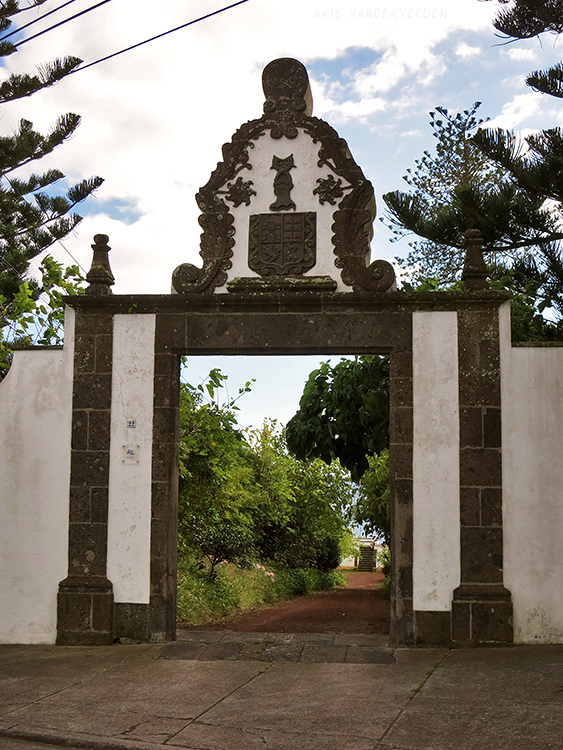 Quinta das Amoreiras is an old manor house.  The stone above the door says it was built in 1755.  The walls are built out of solid blocks of basalt almost 2 feet thick.  This gives the house a stately presence – it seems to say: I’ve been here 250 years and I’ll be here a thousand more.  We had the ground floor level (essentially a walk-out basement) to ourselves, and the owner Cristina lives upstairs. 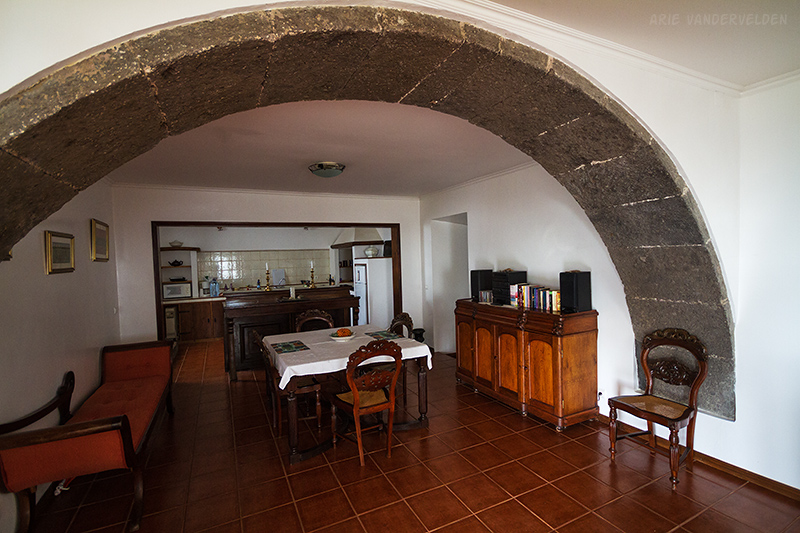 Inside it is very spacious, and there is a huge vaulted arch, again about 2 feet thick, that separates the living room from the kitchen.  There are two spacious bedrooms and a huge bathroom.  It is furnished with some really nice antiques – heirlooms, Cristina says, handed down over the generations. 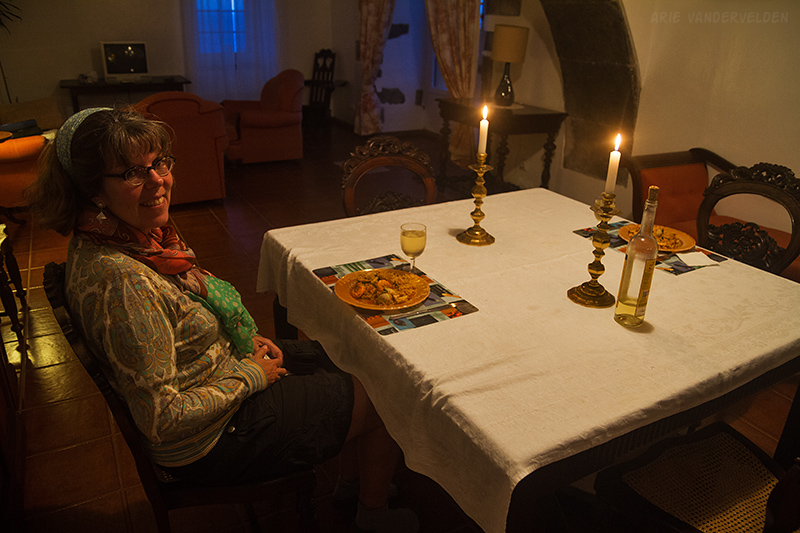 The living room walks out onto a lawn.  It was a nice place to have happy hour drinks, eat dinner (weather permitting), and to watch the sunset. 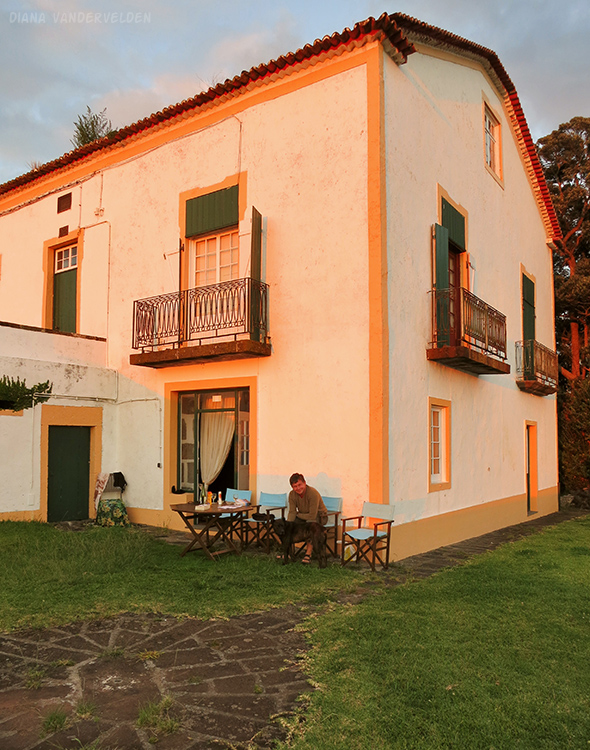 Next to the lawn were some flowering bushes that attracted butterflies. 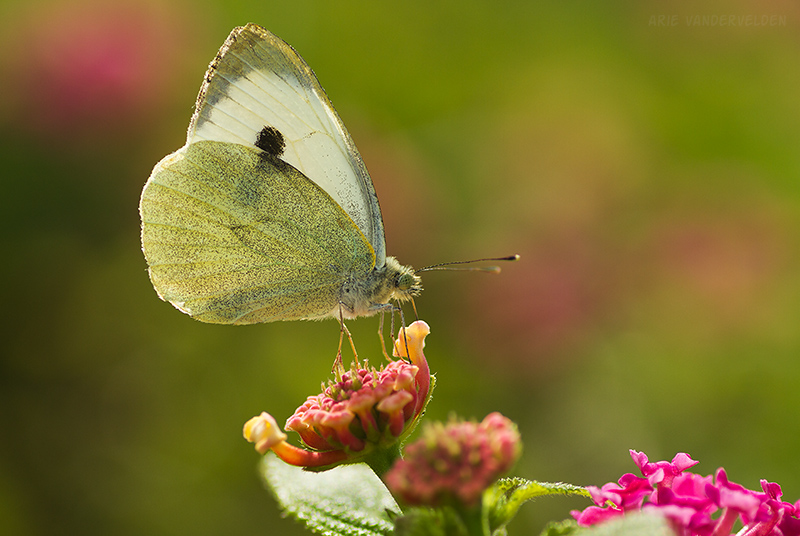 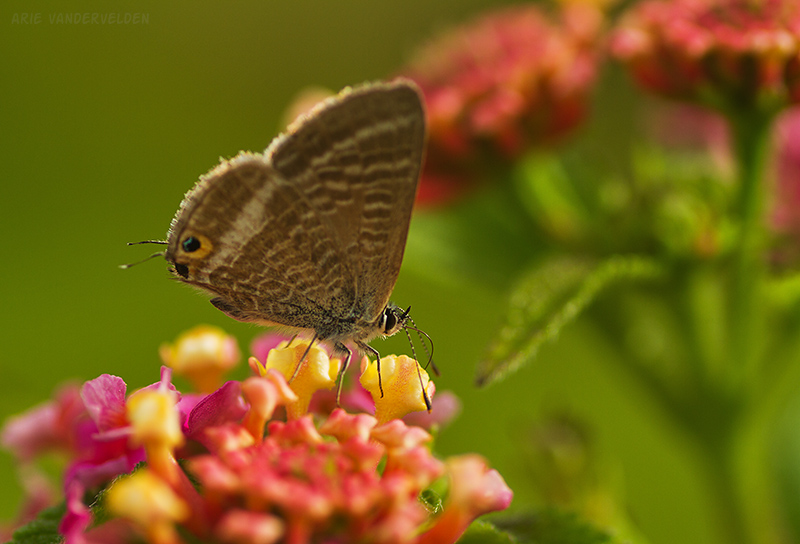 From the lawn were some great sunset views. 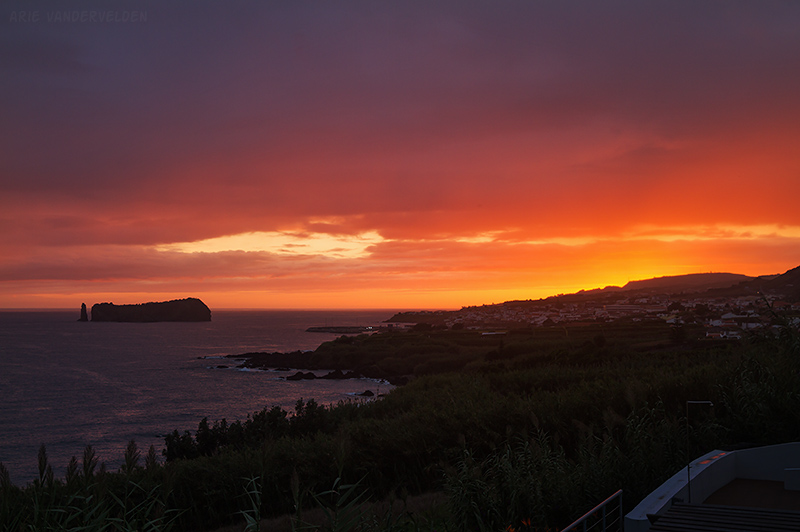 A path led from the garden to a corn field.  At the bottom of the corn field was a gate, and another set of stairs led to a tidal pool surrounded by black basalt.  I’m guessing that the pool is a collapsed lava tube.  The water is kept in the pool by a concrete wall, and at high tide waves wash over top of the wall, refreshing the pool water. 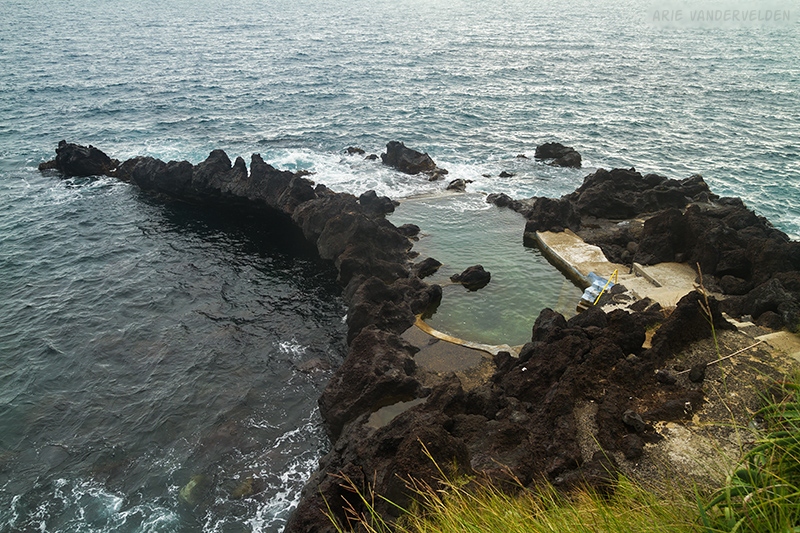 In 2015 we visited in September, and the sea water was warm enough to swim for half an hour or more before getting chilled.  In 2016 we visited in late April.  This time the water was bracing, and I managed swims of only a few minutes. 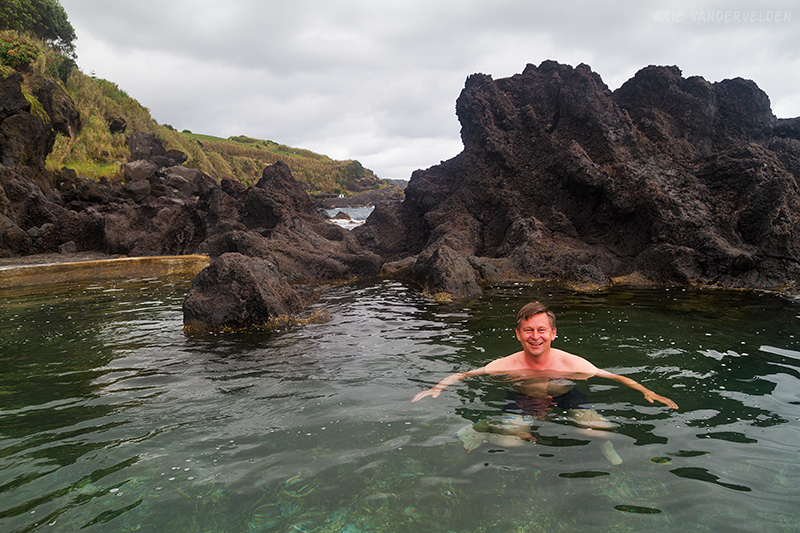 The tidal pool was beautiful.  While floating around I thought about being in the middle of the Atlantic Ocean, a thousand miles from the continent.  Water, water, everywhere… 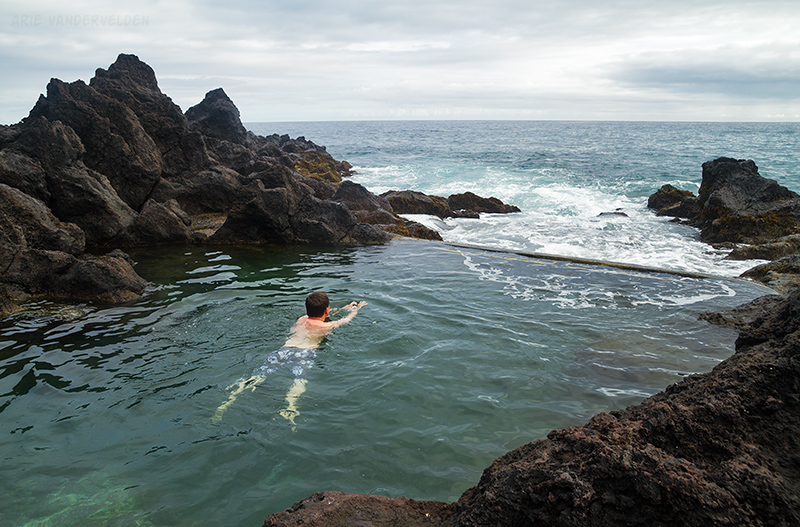 Continue to part two, where I describe three more hikes on the island of São Miguel.