Pembrokeshire was our first long-distance hike in Britain.  We found out about it through a listicle-type web article with top-rated hikes in the world, and Pembrokeshire made the list.  I did some research, and found out about the availability of a luggage shuttle.  We were sold – it seemed like an excellent way to celebrate Diana’s 50th birthday.  I built an itinerary, booked B&B rooms and pub rooms, and we bought a plane ticket to Bristol.  From Bristol we took a combination of trains and buses to Poppit Sands, a little hamlet on Cardigan Bay.  At Poppit Sands we checked into our pub room and settled in.  Here is Diana holding our hiking guidebook. 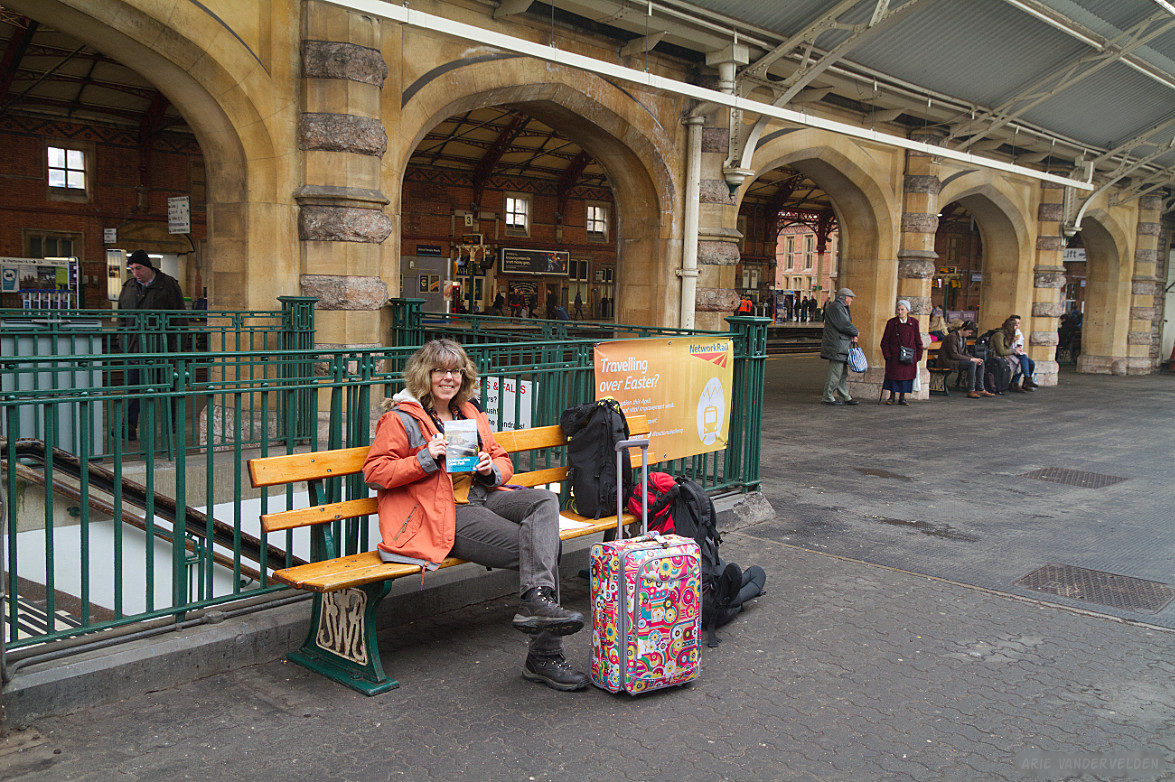 After having traveled for nearly 24 hours, we took an afternoon stroll on the beach to stretch our legs. 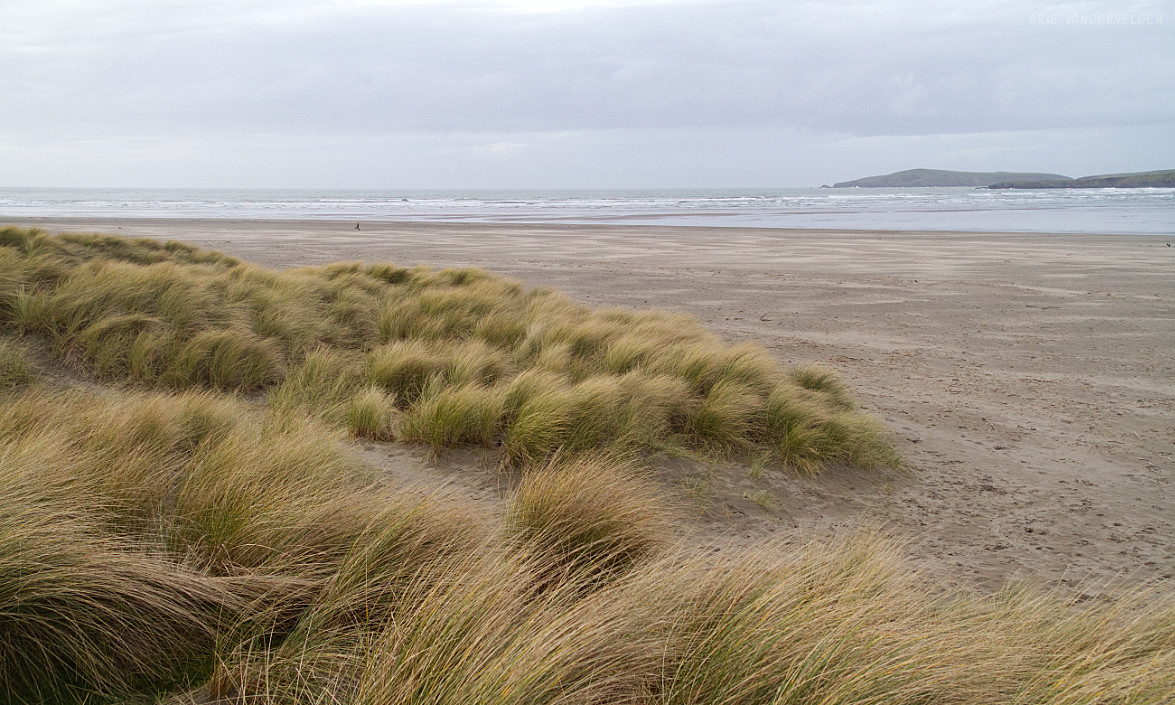 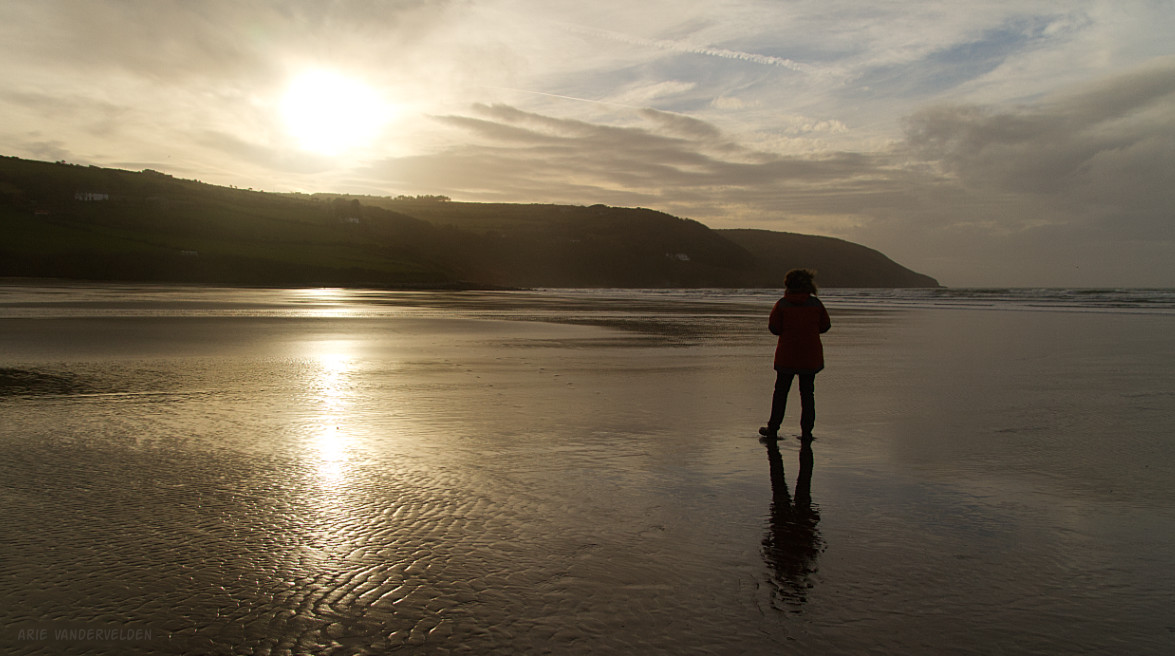 After our beach walk we went back to the pub, where we feasted on fish and chips made with locally caught cod, before retiring to our comfy room upstairs.

The wind had picked up overnight, rattling the windows and shrieking through the treetops and powerlines.  Poppit is located on a protected inlet, and  we could tell things were worse up higher.  Over breakfast we discussed things with the pub owner, but he figured we’d be all right.  So, taking his advice we set off down the trail. 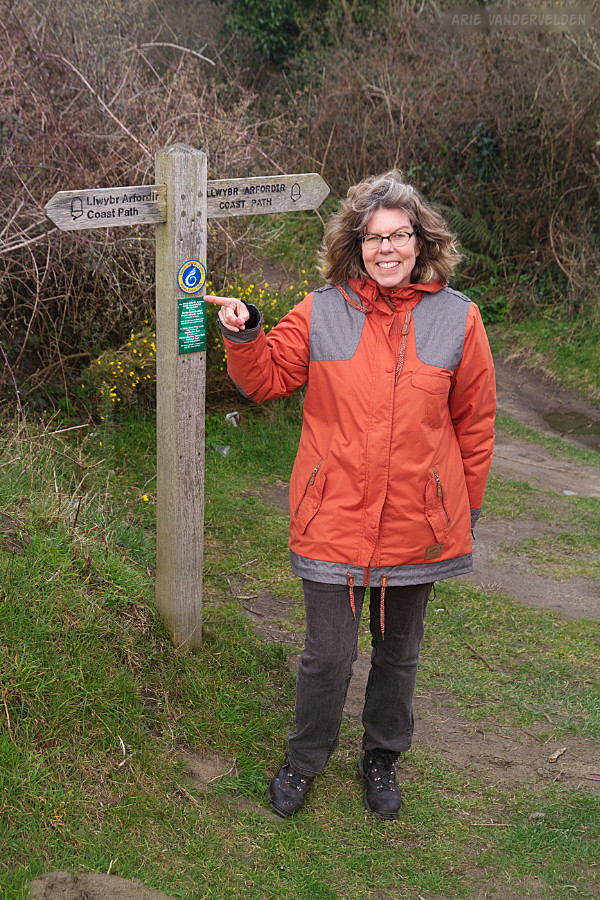 We followed a narrow little road climbing up towards Cemaes Head, the headland at the end of the inlet.  The road was flanked by old stone walls and hedges, offering protection from the wind.  Eventually the road ended, and we hiked up a trail behind a stone wall, again in the lee of the wind.  Here we got big views of the sea, where large waves with whitecaps were being whipped up by the wind.  We then turned a corner, and now faced the wind directly.  When the trail approached the edge of the cliffs the winds became even stronger, with gusts so strong that we had trouble standing up.  There was a barb-wire fence, and we clung to it trying to open the gate.  At this point we still had 12 miles of trail to go, all along exposed steep cliffs, directly into the wind.  The gusts must have been 100 km/h or so.  We decided to turn back.

We hiked back to Poppit, and from there we continued hiking inland, along the road into St. Dogmaels.  At the village of St. Dogmaels, we had a look around an old ruined abbey. 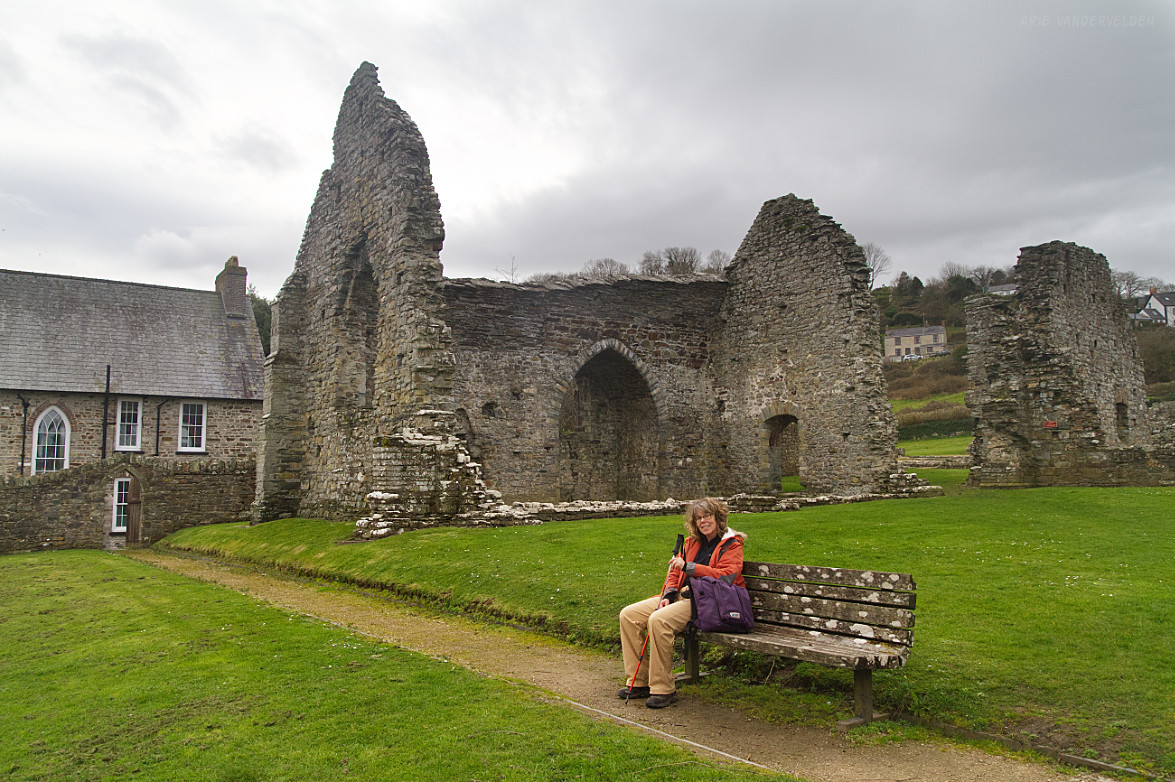 We then hiked through some rolling hills with sheep paddocks to the larger town of Cardigan.  Despite it being only late March there were signs of spring. 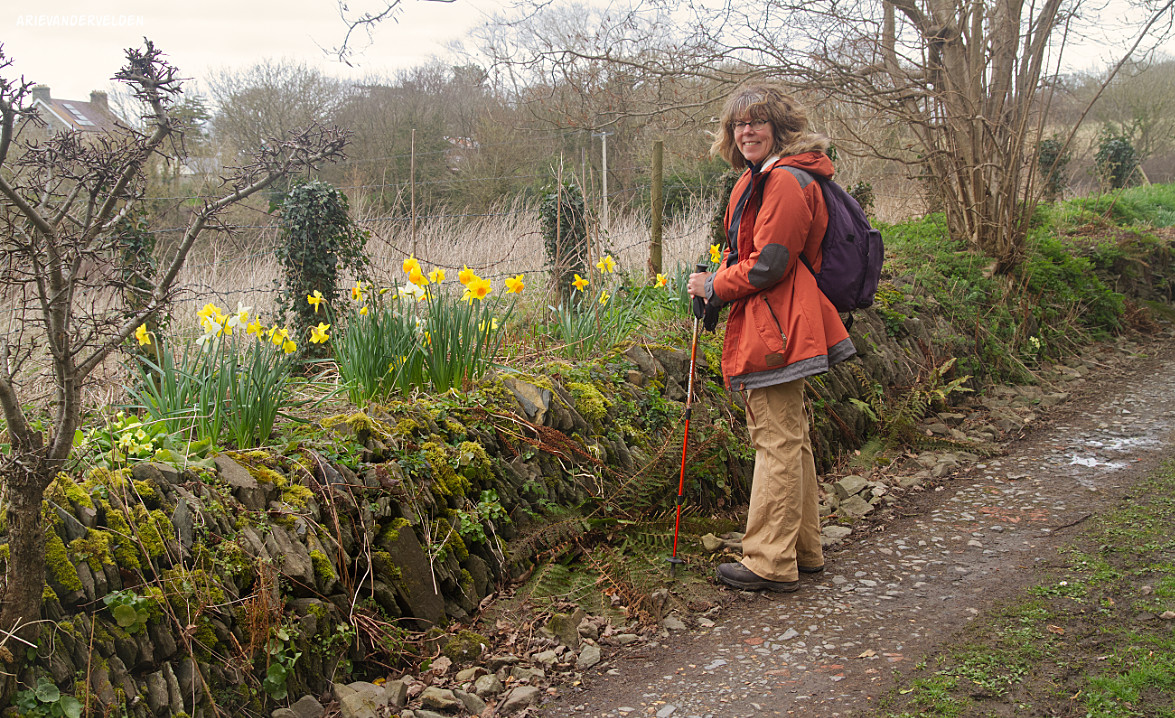 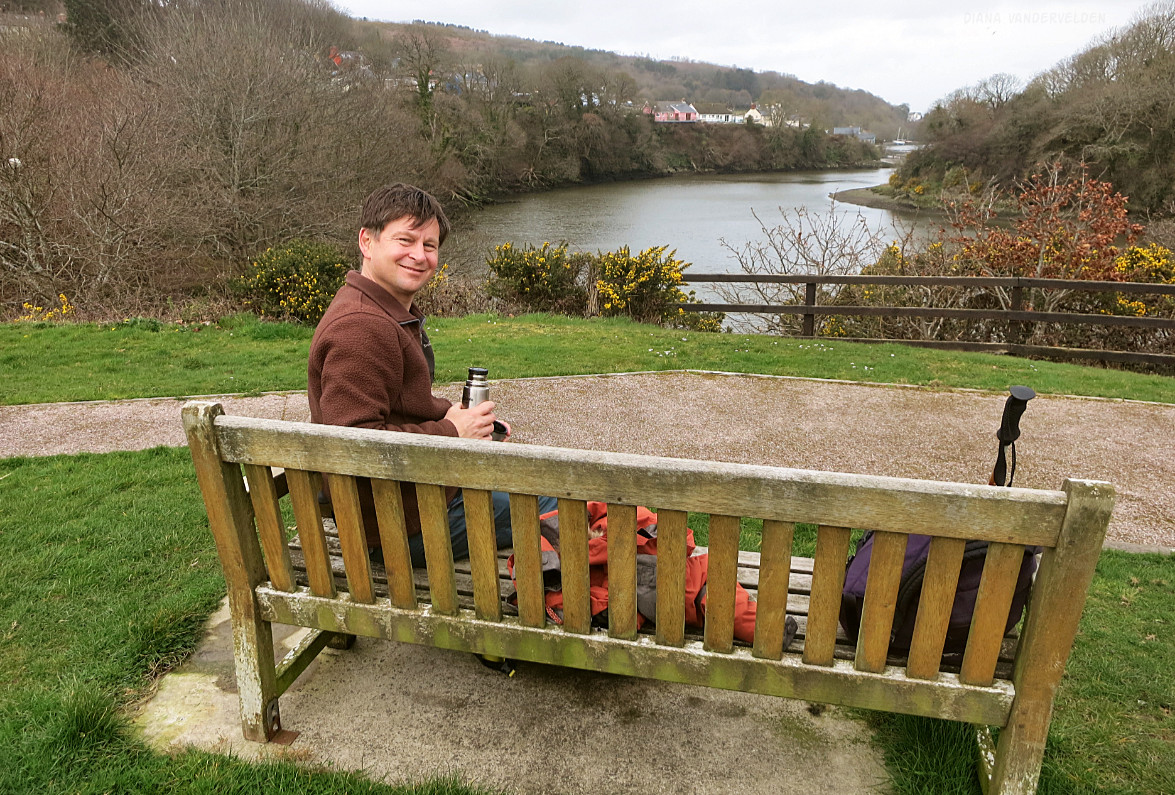 In Cardigan we had hoped to catch the bus to Newport, but as it turned out there’s no bus service on Sundays here.  We were stuck.  We had arranged for a luggage shuttle, and we thought about our luggage driving past in a taxi without us, while we were sitting on the bus bench!   Not knowing what to do, we went into the pub opposite the bus stop and asked around there.  People there were quite friendly (and drunk too), and a few phone calls later a pricey taxi showed up. 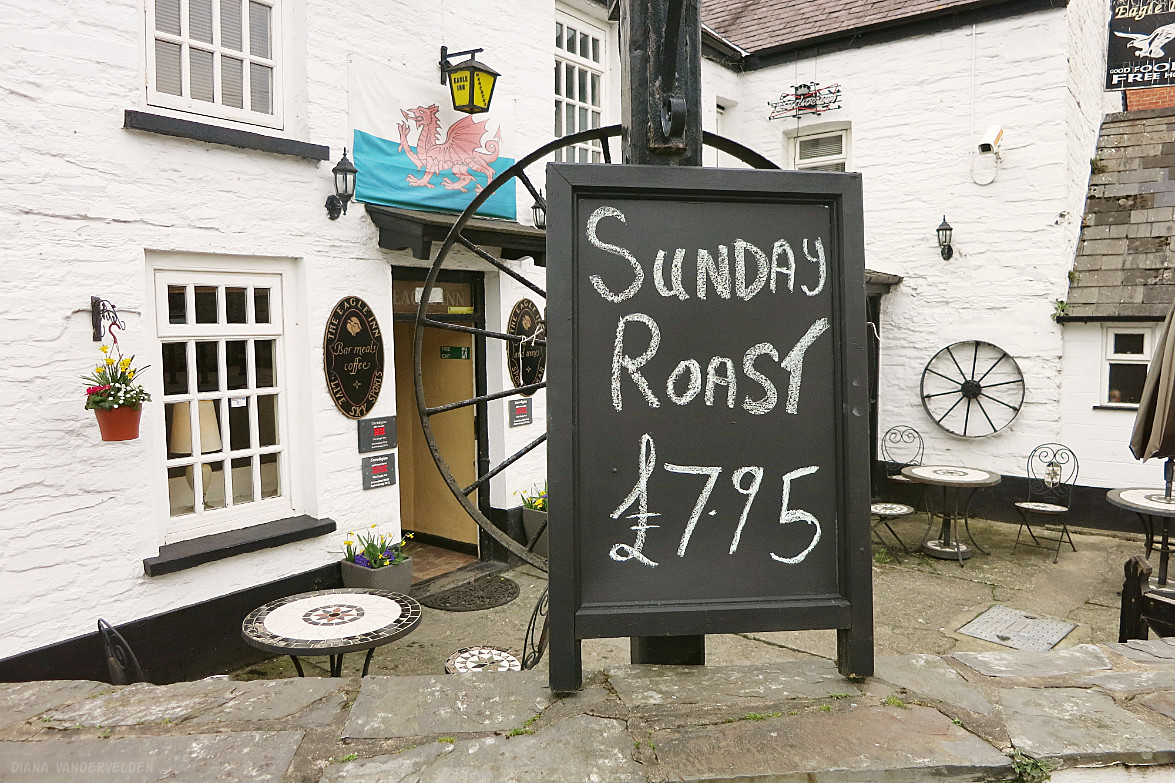 In Newport we checked into the pub.  We asked if our luggage had showed up yet, and they said, no, haven’t seen it.  So, we had a look around Newport.  There is a pretty old church, and there is a castle on the hill overlooking the town. 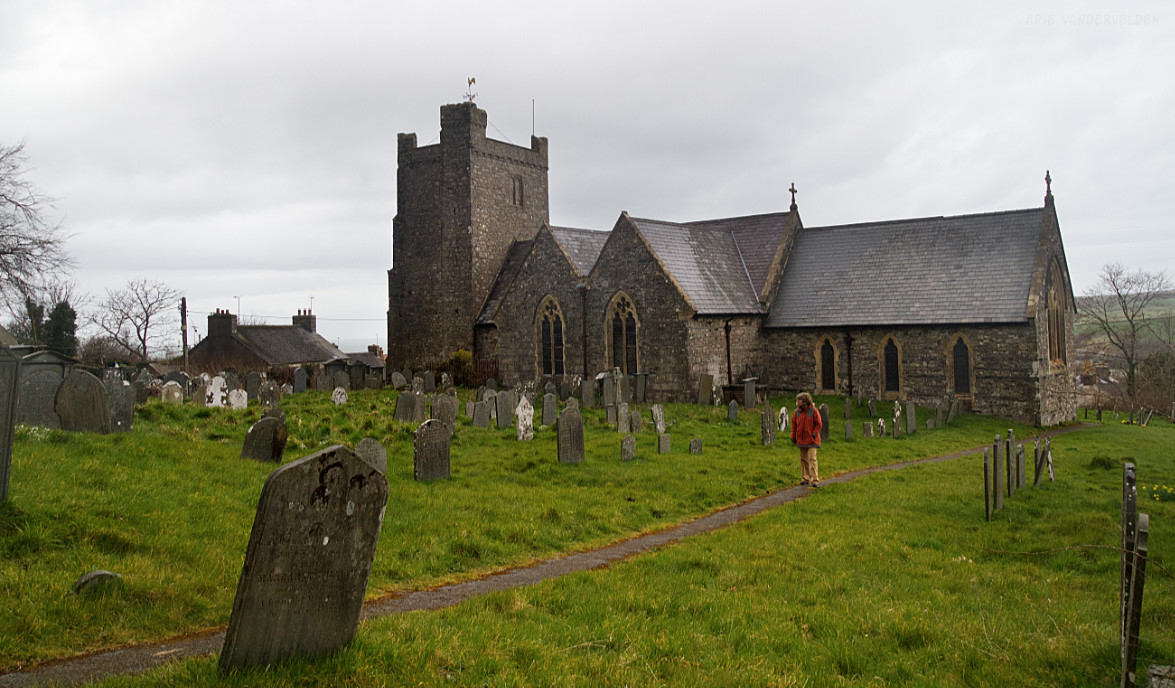 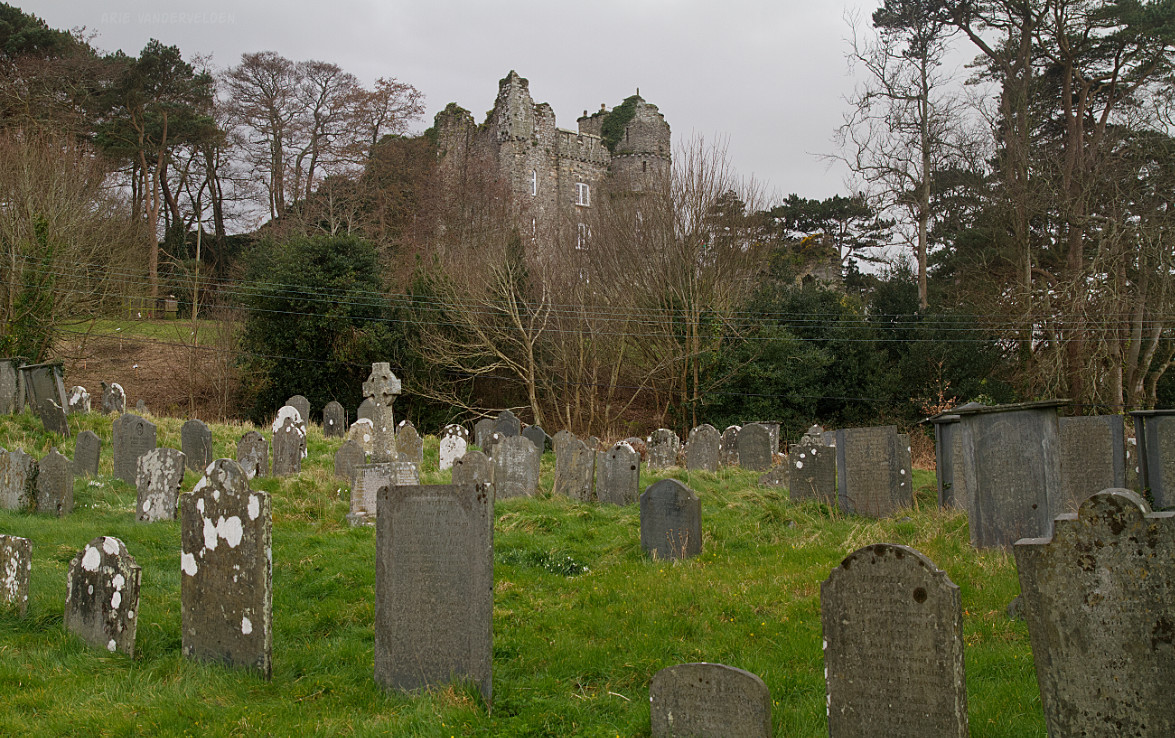 At dinnertime our bags still hadn’t shown up yet.  I went down to the barroom and asked the bartender.  He phoned the previous hotel – yes, the bags were picked up.  He called the luggage transfer center, who in turn called the bag driver.  The driver then called the bartender to let him know that, yes, the bags were at the pub.  At this point he asked all of the staff.  Nobody had seen the bags, and they started a scavenger hunt around the pub.  The bags were found in room eight, which we were supposed to have been checked into, but by mistake they had put us into room one.  So, problem solved.  We celebrated by having a nice dinner in the pub.  Diana had chicken pot pie with leeks, and I had the lamb chops. Yum.

In the morning we caught some news headlines.  The storm had downed powerlines, blown trees on the train tracks causing disruption, and ferry crossings to Ireland had been cancelled.  However, the weather this morning was much better than the day before.  It was overcast, but the winds were much more manageable.  We hiked along the trail, winding our way around small headlands and coves. 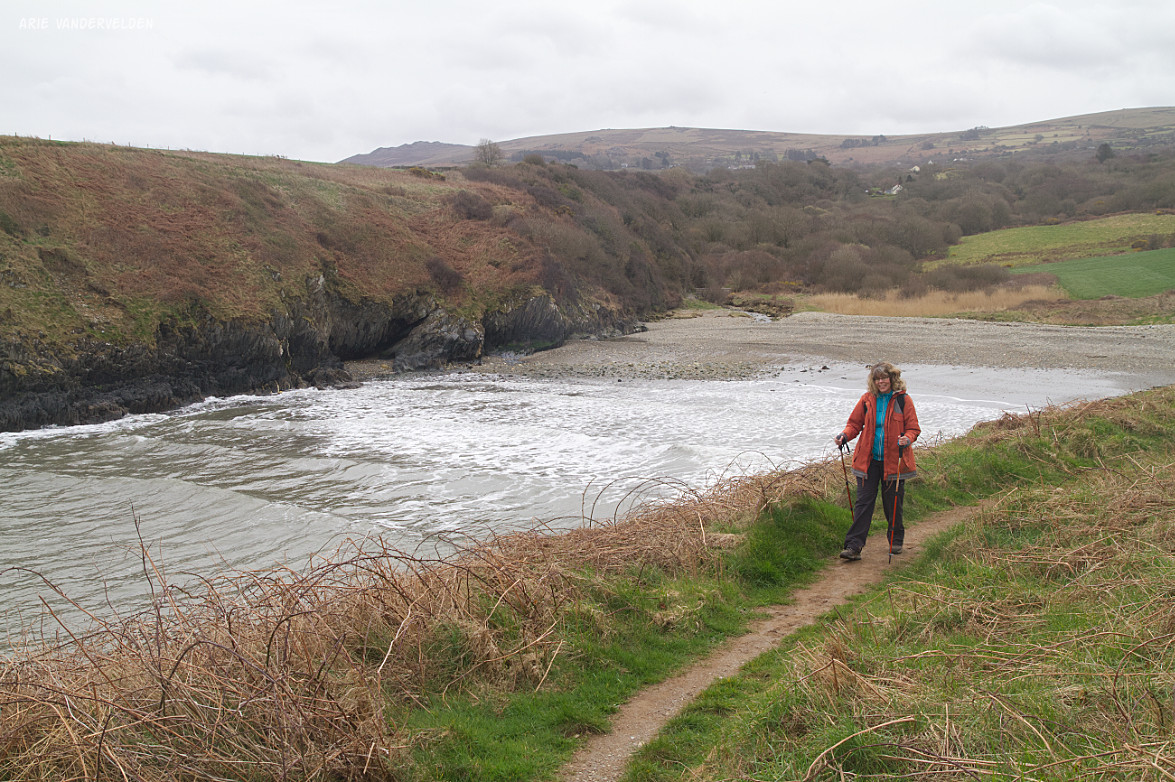 On our left were green paddocks with sheep in them; on our right were black slate cliffs and the sea.  Sometimes the path goes around the paddocks, behind stone walls and barb-wire fences.  Sometimes it goes through the paddocks, and you have to go through gates to get from one paddock to the next.  Sometimes the vegetation is short grass, sometimes bracken and brambles, and sometimes the trail is flanked by hedges that  hide the sheer drop just a few steps away. 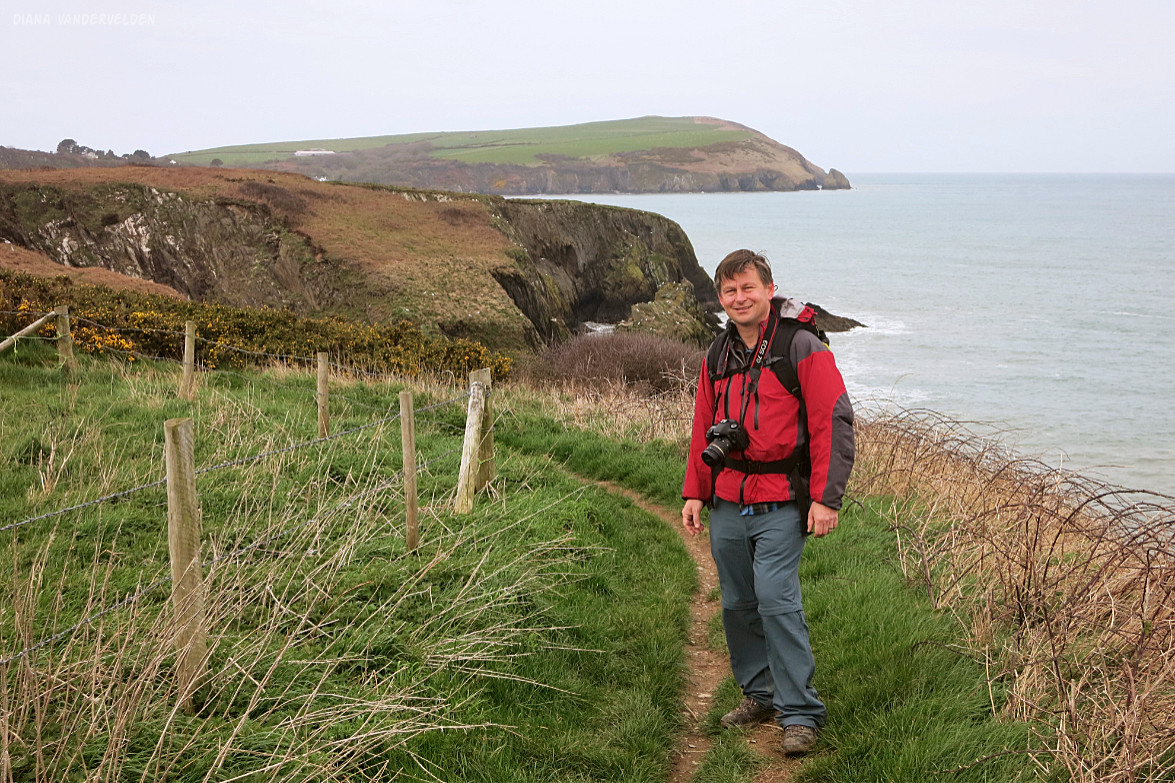 In other places we hiked quiet country roads. 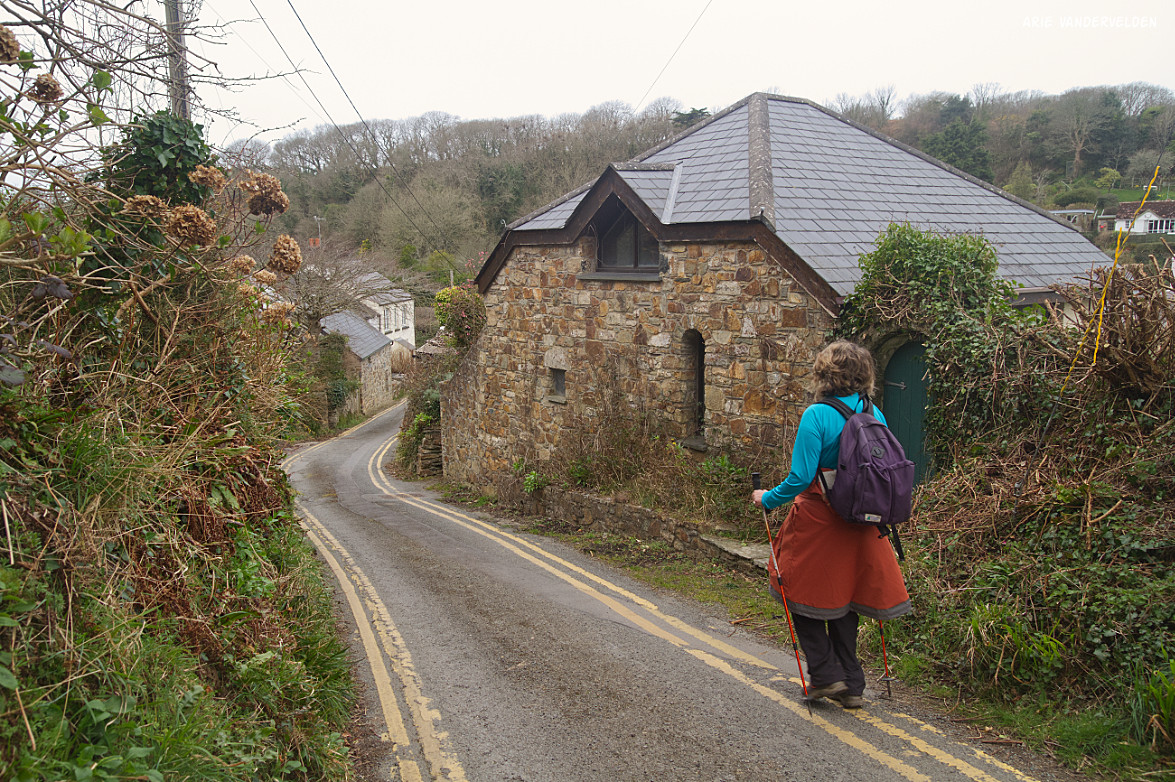 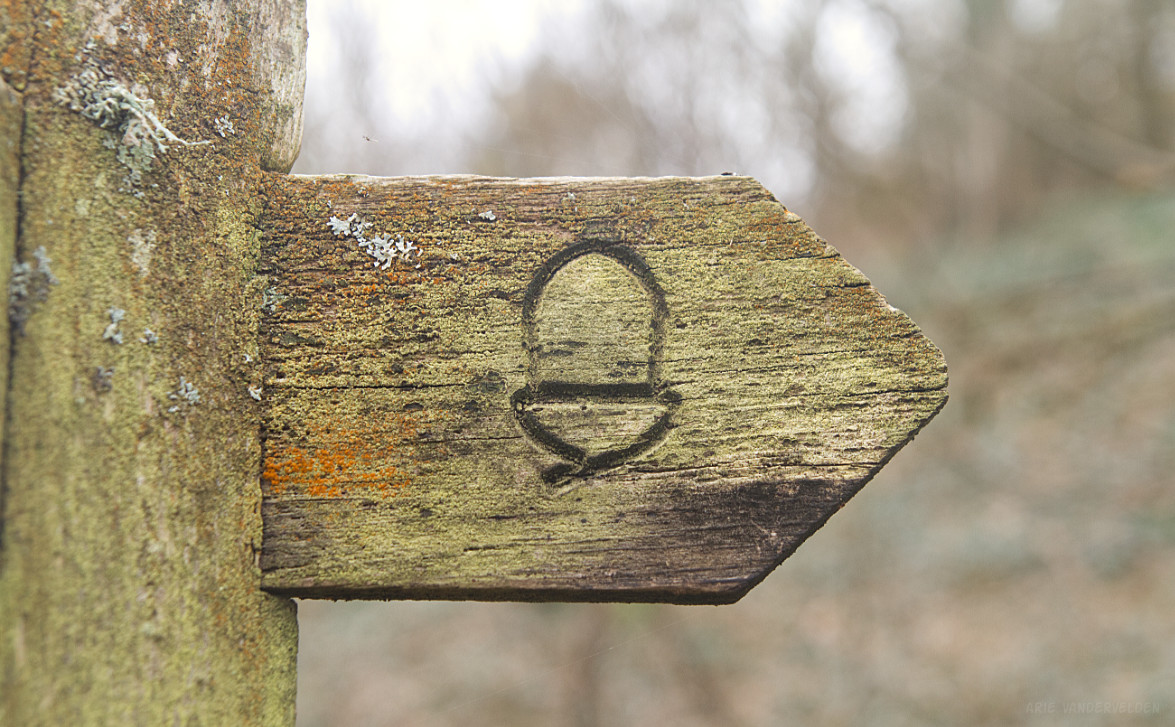 At Dinas, we decided to hike around Dinas Head, a big promontory that juts far out into the sea.  Even though it was quite windy on top, it was manageable this time. 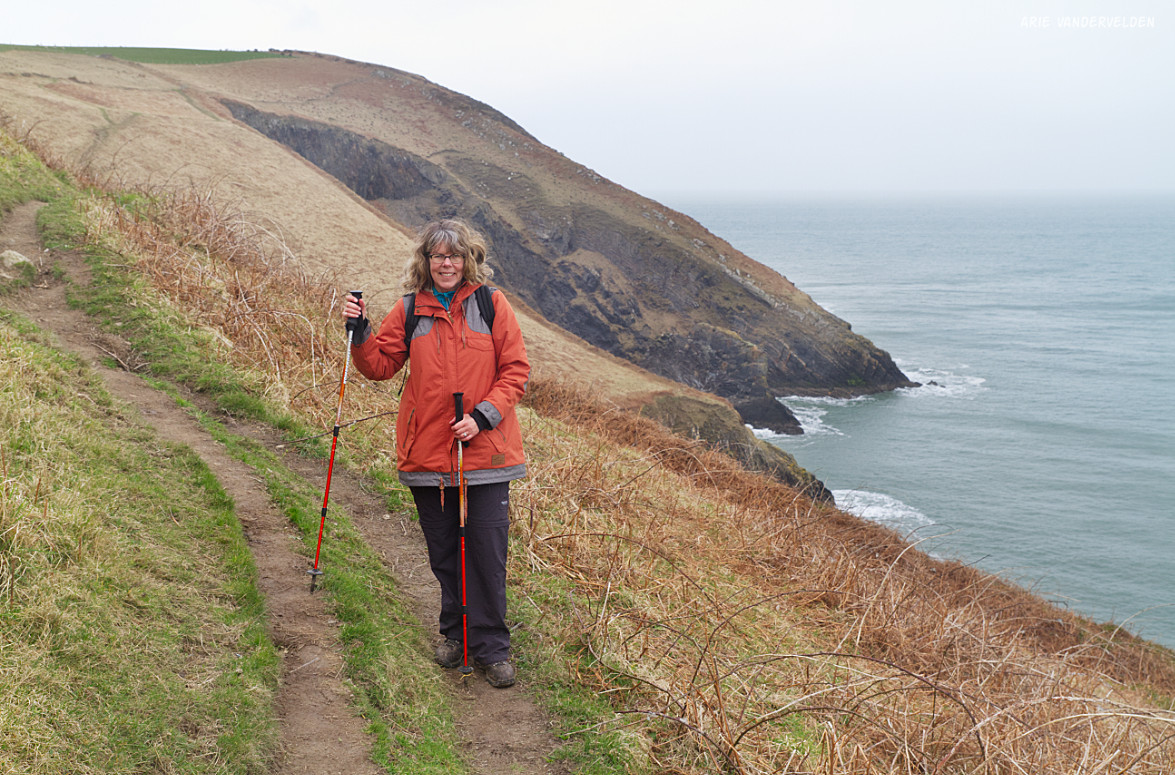 From the peninsula we could see for miles up and down the coast. 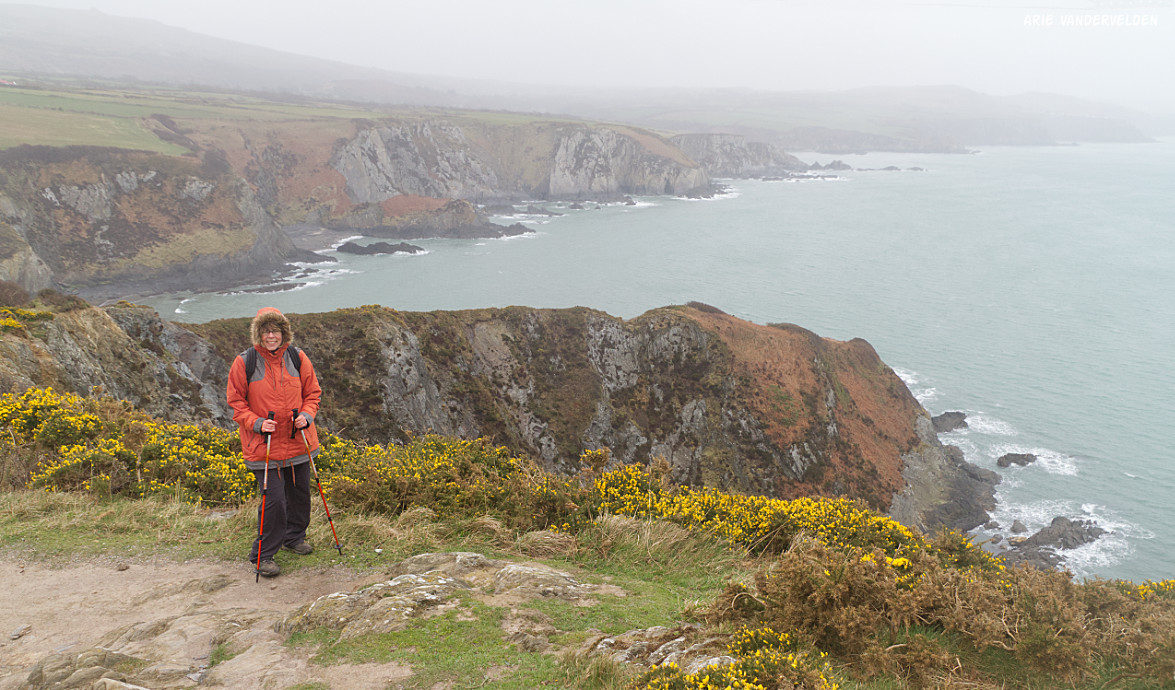 As we hiked back inland it started to rain a little, and by the time we got to our B&B the weather started to deteriorate some more.  So, good timing this time!  The B&B owner drove us to the local pub where we had fish and chips, and a pint of ale.

Overnight the winds were quite bad again.  We could hear the winds shriek through the powerlines and treetops.  In the pub the night before, we had watched the weather forecast on the tv, and the weatherman talked emphatically about gales, and severe gales.  But by morning the winds had died down quite a bit, and the sky was mostly clear.

Fortified by a breakfast of English muffins, eggs, sausages and fried tomatoes, we set off on the trail.  The wind was quite gusty in a few spots, but we managed fine.  We were rewarded with some wonderful views of the jagged coastline, bathed in sunshine. 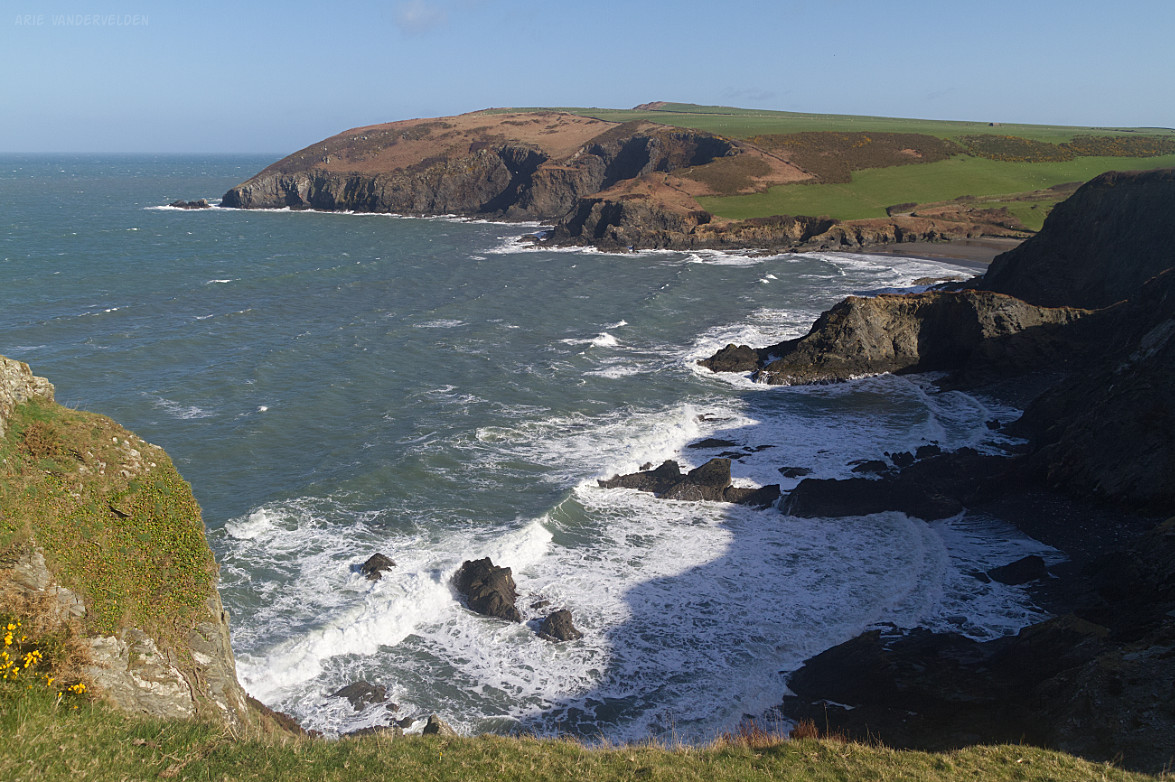 The black rocks along this part of the coast are Ordovician in age. 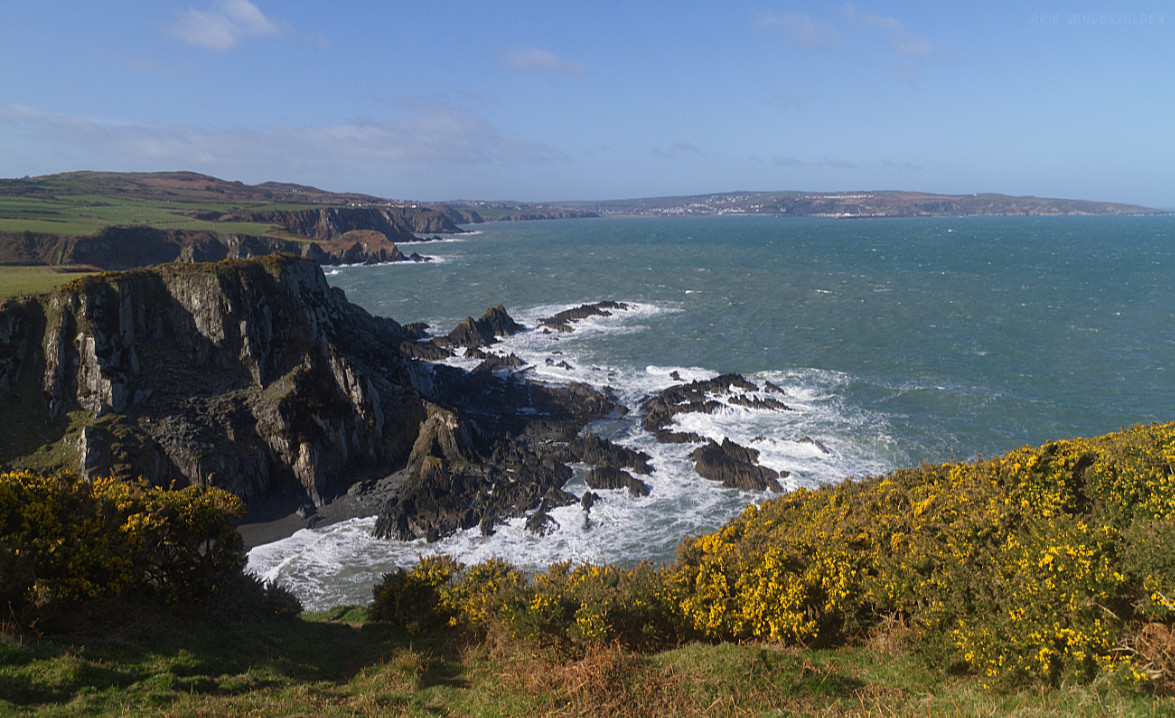 It was windy in spots. 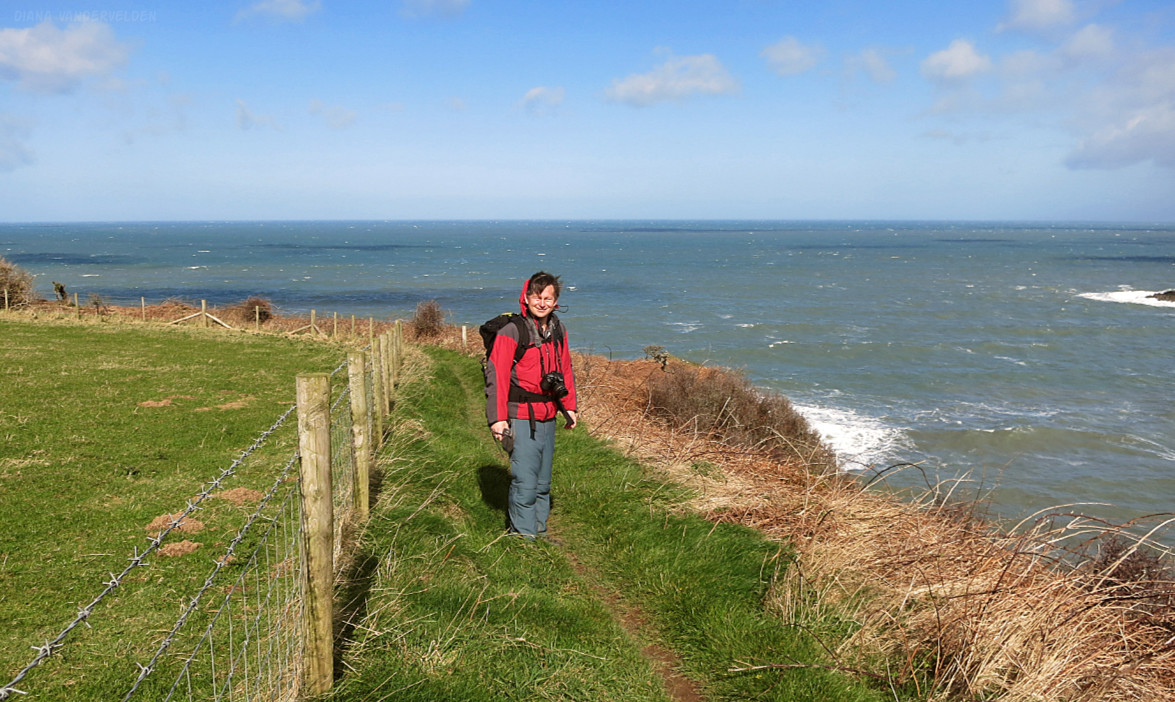 As we approached Fishguard we could see the ferryboat from Ireland coming in.  I think I must have been in Fishguard before, when I was a child, because we must have come through this way on our way to a summer vacation in Ireland. 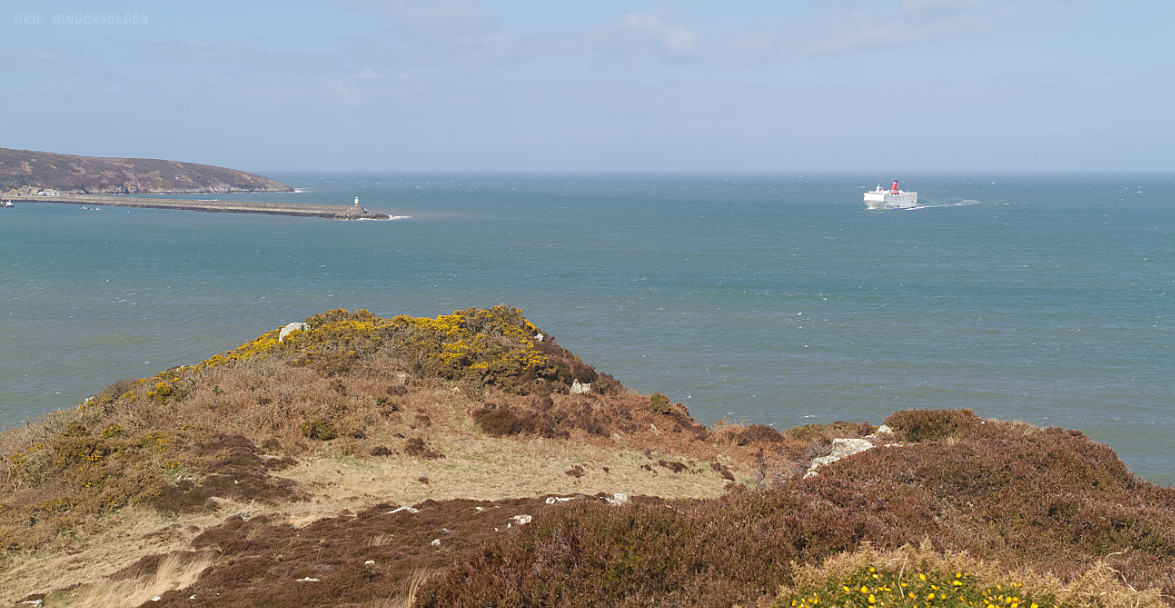 In Fishguard we were stopped by an old man out for a walk.  He had a strong lilt in his voice and we had a bit of trouble understanding him, but he asked us where we had come from, where we were going, and then told us some of his life, and how his cousin moved to Canada, and how he had never seen him again.

Cardigan and Fishguard were two ports where trans-Atlantic ocean liners sailed from, taking immigrants away to Canada.  It is interesting to see the ports on the other side of the ocean, after having seen pier-21 in Halifax before.  We stopped for lunch in a little bakery and had beef and vegetable soup with homemade buns.  It reminded us of prairie cooking.  It felt like home.

Continue to part two of our Pembrokeshire hike.

We hiked this trail in late March to early April of 2015.  There is a guidebook with maps and descriptions. 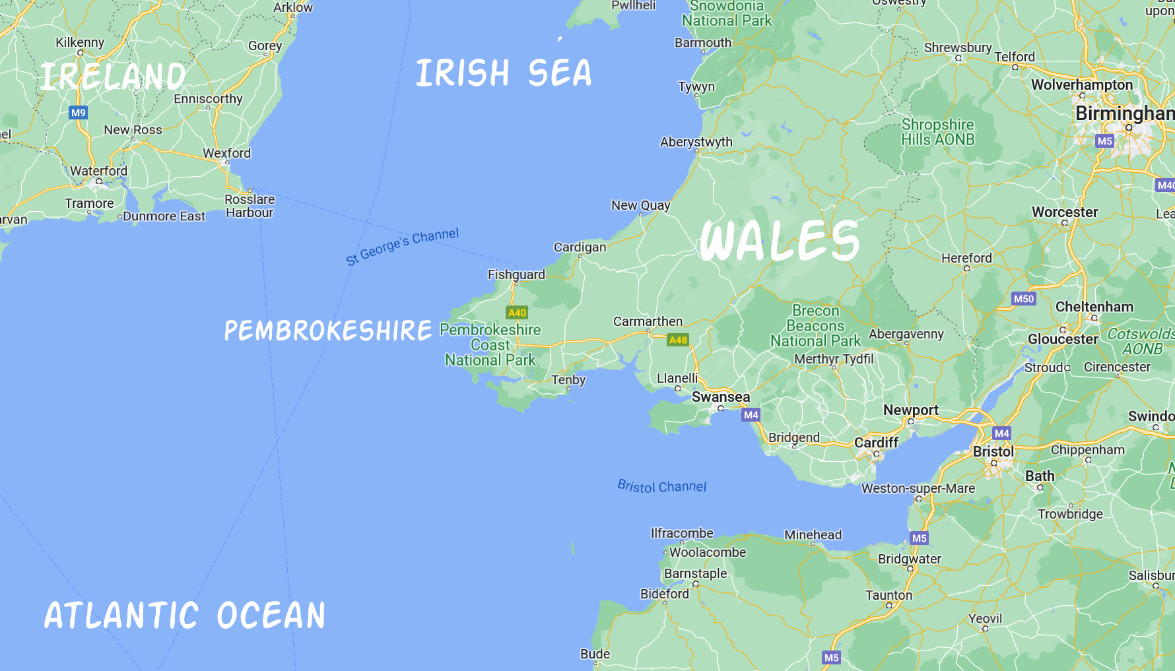 Getting to Poppit Sands is not easy.  We took a train to Haverfordwest, where we switched to a bus to Cardigan.  From there is a seasonal bus called the Poppit Rocket.  Fishguard has good train and bus connections.

Here are the hiking distances: 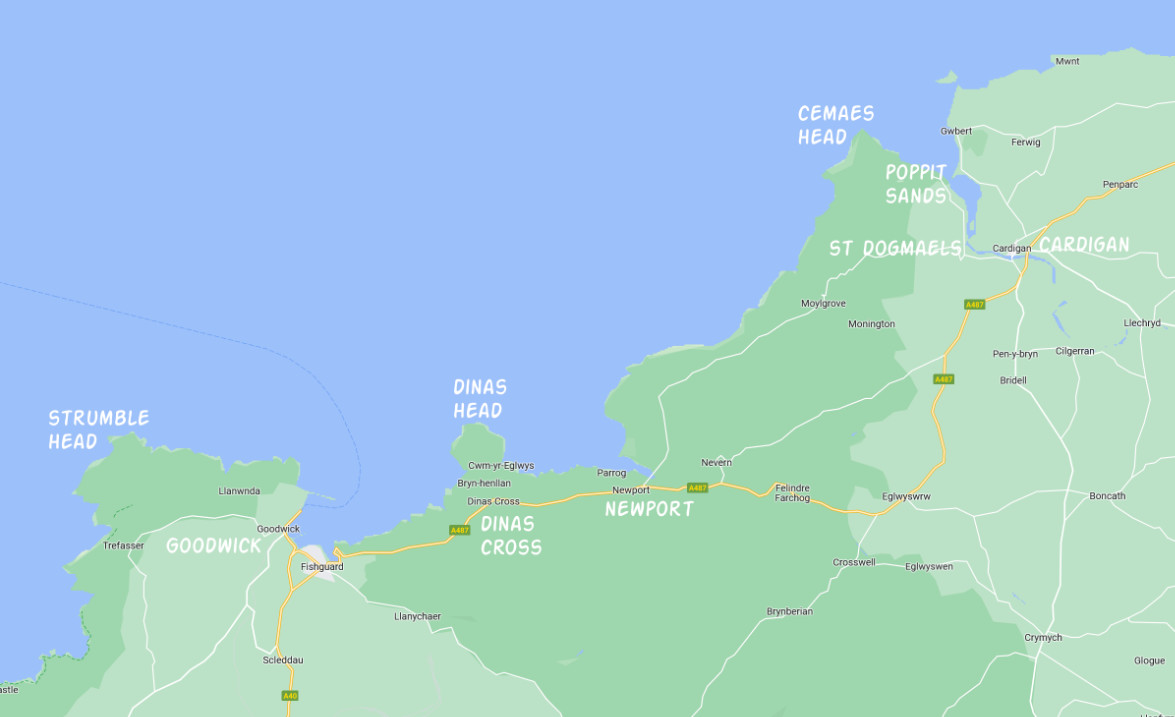 We had our luggage shuttled by luggagetransfers.co.uk.

We stayed at pubs and B&Bs.  Note that the Pembrokeshire coastal path has YHA hostels at strategic locations, including Poppit and Newport.